German energy policy is never far from the headlines, but since the invasion of Ukraine in February 2022 the government has made two important announcements with massive repercussions for the market.

Secondly, the government announced it had released almost€3 billion in funds for new floating LNG terminals (FSRU) and was drafting an LNG Acceleration Act to accommodate these terminals quickly. It also made €1.5 billion available to market area manager THE in March 2022 for companies to purchase LNG for meeting German storage fill obligations. Germany is pushing for direct LNG import capacity now, while long term it seeks to reduce natural gas demand to become a carbon-neutral economy by 2045.

The twin drivers of an urgent need to decarbonize the power system as well as reduce imports of Russian gas make for a delicate balancing act for the government.

The Easter Package is ambitious. All onshore renewables capacity targets for 2030 have been increased. Solar PV's capacity target is now 215 GW and onshore wind's is 115 GW. Yearly additions of solar PV will increase to 22 GW from 2026. Onshore wind additions are expected to reach 10 GW per year from 2025. This implies a step change in additions. In recent years, renewable auctions have failed to attract as much capacity as the available volumes casting doubt on whether the industry can deliver. Even In our most ambitious outlook, we don't expect these targets to be met.

Integrating this renewable capacity will have consequences for the market. Our latest Planning Case (April 2022), which assumes lower additions than the targets, shows that for the full year of 2030, the majority of hours in Germany will be priced below €15/MWh. This would create significant cannibalization risks for new and existing assets. Accelerating the electrification of demand (directly or via hydrogen) and the development of storage could offset this risk, however, in both cases, additional government support may be needed.

These proposals are currently working their way through the parliamentary process in Germany. Meanwhile, the government has a Summer Package planned, which should provide long-awaited incentives for onshore wind. German energy policy is at a critical point. 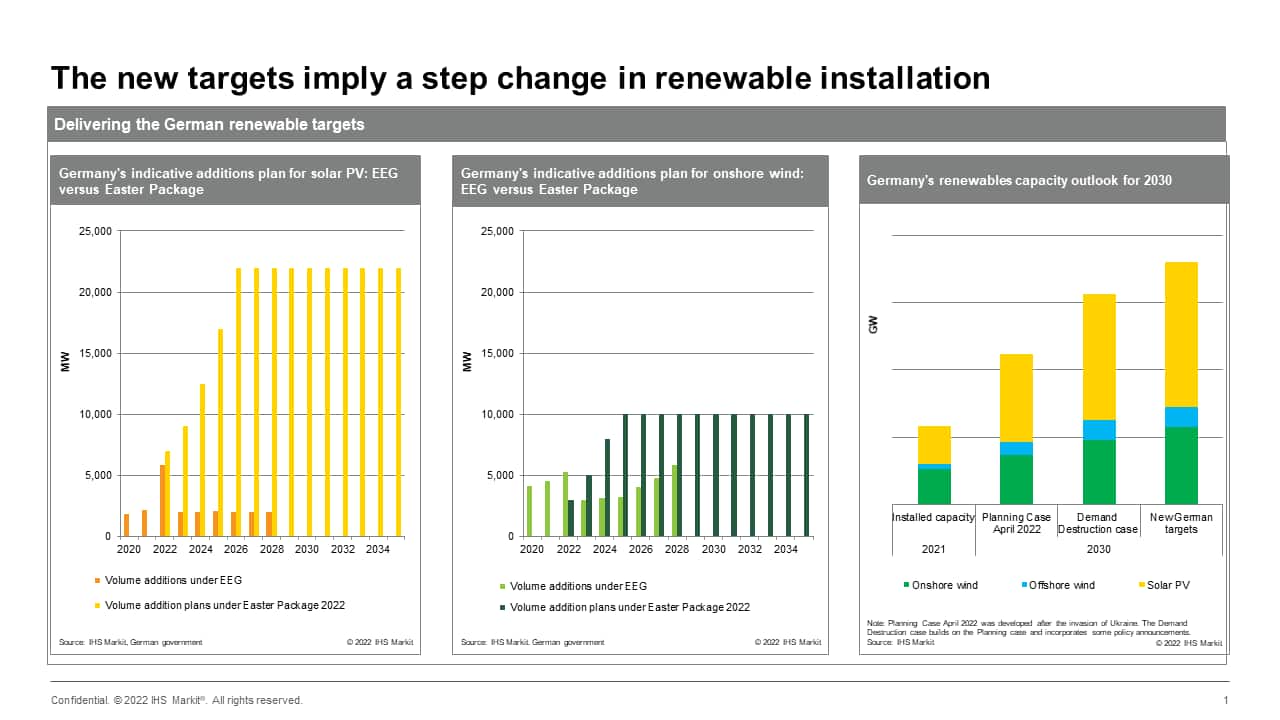 Zoe Grainge is a senior analyst in European renewable power with the Gas, Power, and Climate Solutions team at S&P Global Commodity Insights.

Sign up to get the latest natural gas news and insights

You’ll receive information based on your interest in natural gas topics.
Sign up now
Subscribe to RSS Feed