The gas price spike has incentivized Norwegian upstream producers with midstream assets to minimize ethane recovery, but US imports continue

Norway suspends ethane exports
Norway as a country is both an importer and exporter of ethane, although both production and imports of ethane are much larger than exports. Ethane is recovered at the Kaarstoe gas processing and NGL fractionation complex along with propane and butane (LPG) and is sold domestically and exported. INEOS receives domestic ethane cargoes at its Rafnes steam cracker and also imports ethane from the United States. Equinor exports some of the ethane recovered from Norwegian natural gas production at Kaarstoe.

These activities are separated both geographically and from an infrastructure standpoint; ethane recovered at the NGL fractionators at Kaarstoe for domestic consumption and export is not linked directly to the Rafnes complex. A pipeline project was planned to transport ethane-rich natural gas from Kaarstoe to Rafnes (the Skanled project), but has not been completed. The pipeline was to deliver this ethane-rich gas stream to the Rafnes complex with ethane then extracted and recovered at Rafnes to be used as a petrochemical feedstock. The natural gas stream remaining was planned to be sent on to Denmark and Sweden as a fuel. This project was suspended in 2012 and has not been revived.

Since INEOS began ethane imports to Rafnes in 2016, Norway has been a net importer of ethane in most months. On the export side of the equation, Equinor has ethane supply contracts with both Borealis in Sweden and TotalEnergies in Antwerp, and although volumes are small, exports have mostly been steady month to month (see Figure 1). IHS Markit analysis of recent waterborne ethane liftings from the United States to Norway and receipts and exports of ethane from Norway indicates the export of ethane from Norway fell in September and halted entirely in October. 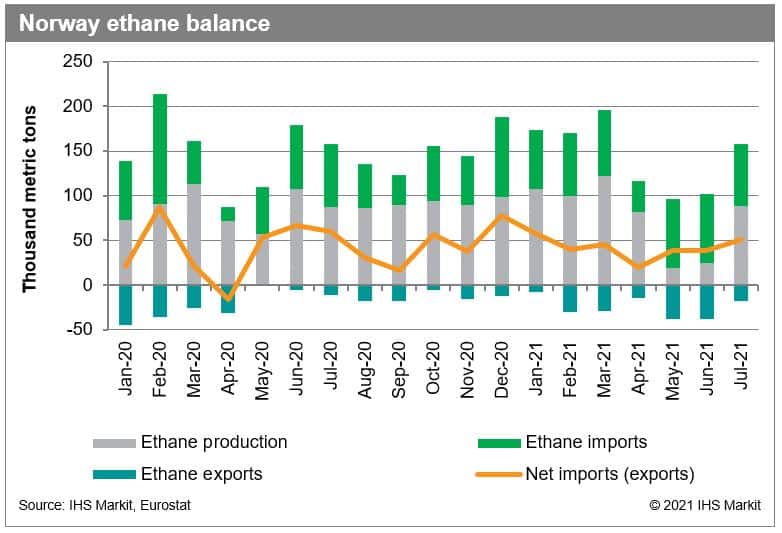 A summary of the ethane feedstock situation for the two buyers of Norwegian ethane is as follows. To meet the needs of its steam cracker at Stenungsund, Sweden, Borealis imports ethane both from Norway and the United States. Borealis has ethane supply contracts with shale gas producers in the Marcellus and Utica plays in the northeastern United States and imports cargoes originating at the Marcus Hook terminal near Philadelphia, Pennsylvania. IHS Markit expects Borealis will increase its lifting at Marcus Hook to fill the gap left by the loss of Norwegian supply.

The other buyer of Norwegian ethane, TotalEnergies, receives ethane at its petrochemical complex in Antwerp, Belgium. TotalEnergies does not have any direct access to US ethane supply, and there is no established market for spot ethane cargoes. In the past, INEOS has at times used its surplus US ethane terminal and shipping capacity to sell spot ethane cargoes to other companies, including several to Borealis during the period before its US supply contract came into effect in 2020. This is one possible remedy, as is switching feedstock in Antwerp from ethane to propane or butane. Borealis also has such flexibility, but current ethylene production economics make this very unlikely for both companies. Both propane and butane are widely unfavorable to both US-sourced ethane and European naphtha on an ethylene cash cost basis (see Figure 2).

In October and November IHS Markit's Waterborne LPG has observed three ethane cargoes from the US to Antwerp. One of these originated at Marcus Hook on one of INEOS' Dragon-class ethane carriers, and the other two came from Morgan's Point on Navigator vessels. INEOS and possibly another buyer with access to US ethane supply and terminal capacity is selling some spot volumes to TotalEnergies to make up the gap left by lower Norwegian output. 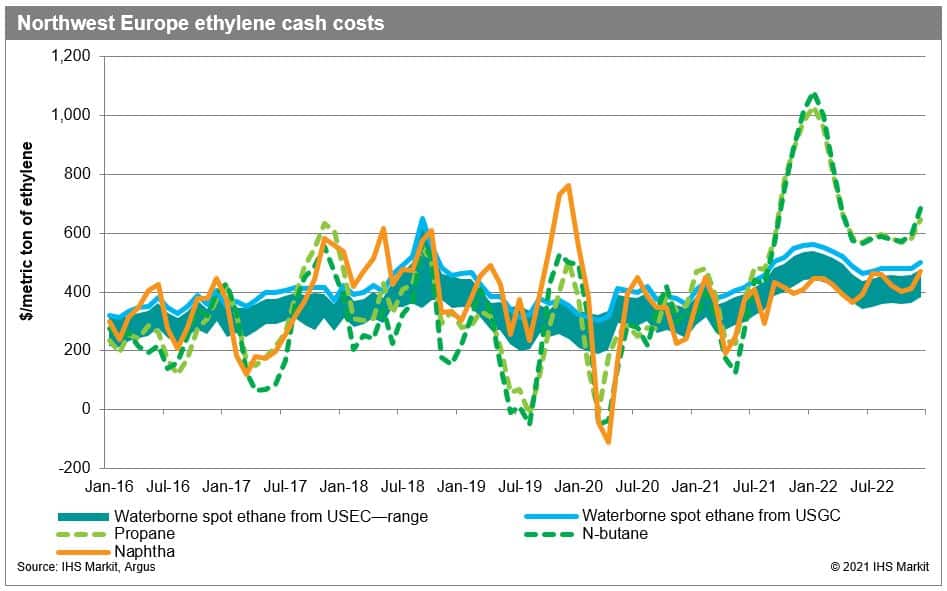 Another possibility would be Equinor sending its ships to the United States to lift ethane cargoes. This would require an agreement with one of the US terminal capacity holders, which could be possible given current utilization rates. In 2021, utilization has been below 80% at all three operational US ethane export terminals.