Gas at a crossroads: A greener pathway or a bridge too far?

Natural gas has always had a differentiated risk profile to oil, most notably because of higher barriers to monetisation. But with rising pressure to shift to a lower carbon energy system, there is a growing divergence between perceptions of gas as a 'bridge fuel' indispensable for energy transition on the one hand and gas as 'just another fossil fuel' on the other. 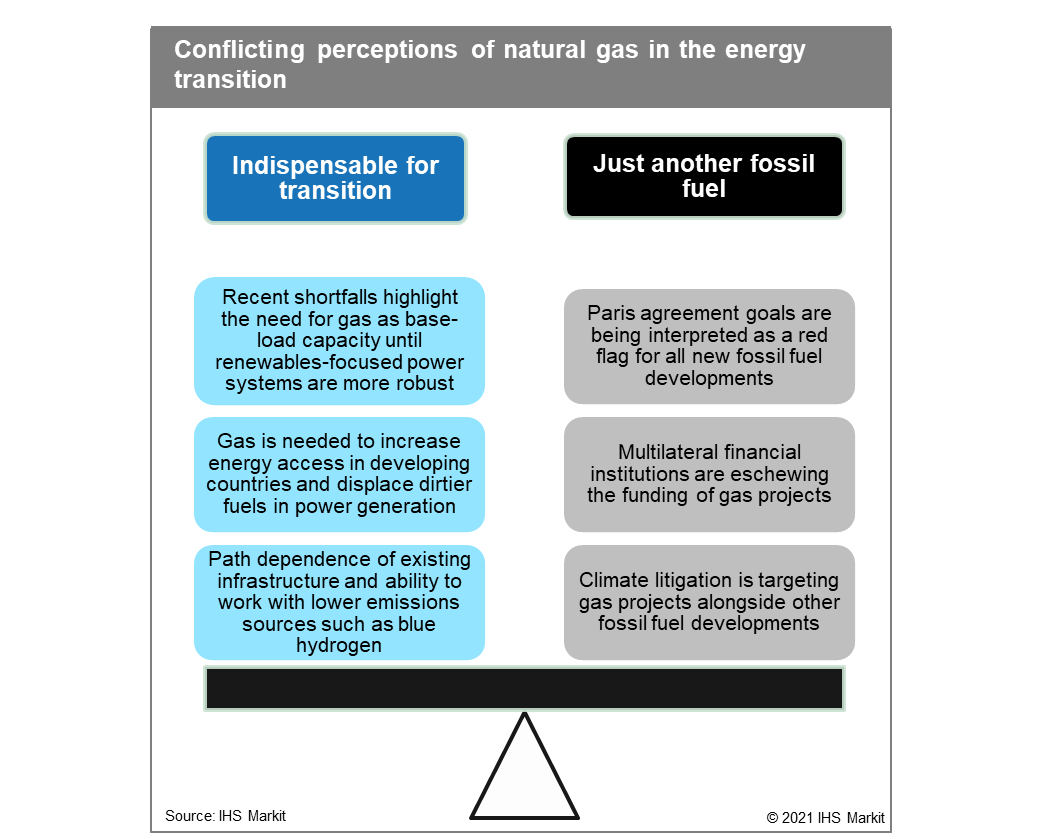 For those advocating a continued role for natural gas as the cleanest hydrocarbon and a means to smooth the transition to lower-carbon fuel types, there are sharp variations in the future demand trajectory to contend with, depending on policy choices across multiple producing and consuming countries. Working in gas proponents' favour are arguments that energy is still a luxury in some developing countries where gas can increase energy access and lower emissions where biomass and coal are the alternatives. Elsewhere, the ability to maximise existing gas infrastructure and potentially leverage that infrastructure for lower emissions gas such as blue hydrogen is a plus.

Set against that, gas risks being written off as a result of its emissions profile in a net zero-focused era, with the International Energy Agency projecting a pathway to net zero in 2050 that requires no new oil or gas project sign offs after 2021. That message and broader concern about the long-term viability of fossil fuel use has permeated the finance sector, including multilateral financial institutions, which are increasingly eschewing the funding of gas projects, and by climate litigation targeting gas projects alongside other fossil fuels as part of efforts to align all aspects of policy with Paris Agreement targets.

Recent IHS Markit energy scenarios capture some of the possibilities for natural gas under different public policies especially towards climate. In Inflections, the base case, global gas production is 30% higher in 2050 than in 2020. In Green Rules, which entails more aggressive government action on climate (though not enough to hit net-zero emissions by 2050), gas production peaks in 2030 and then declines, but only by a cumulative 3% from 2020 to 2050.In either scenario, new investment in E&P will be required to meet global energy demand in 2050, but with very different calls on producers depending on costs and the project mix available. Which projects move ahead will depend on a number of factors including those largely beyond government control such as resource availability; partner priorities, including the role of national oil companies (NOCs) and international oil company (IOC) portfolio choices; and the availability of finance. Governments do have several levers at their disposal, however, notably in their approaches to balancing energy and climate policy, upstream terms and conditions, domestic market obligations including pricing, and the availability of infrastructure to commercialise gas.

Several of these elements factor into our indicators of above-ground risk, which have been revamped to account for differences between oil and gas. Our Export Risk metric takes into account the availability of infrastructure, regulatory constraints to exports including domestic supply obligations (DSOs), security risks including piracy, vandalism, or terrorism, and the risk of international sanctions that restrict exports. Scores for Export Risk are generally lower for gas than for oil, reflecting the difference in physical characteristics and infrastructure hurdles. This risk is also heavily linked into producer type with export access a particularly acute challenge for frontier and early-stage producers such as Cyprus, Suriname, and Kenya. More so in the current environment, where investors need to weigh the commercial imperatives for infrastructure that might be expected to have a 30+ year life span, creating pressure on frontier host governments to optimise other aspects of the contractual framework and, potentially, engage directly in efforts to build out infrastructure in a timely fashion rather than wait for external players to take the lead. 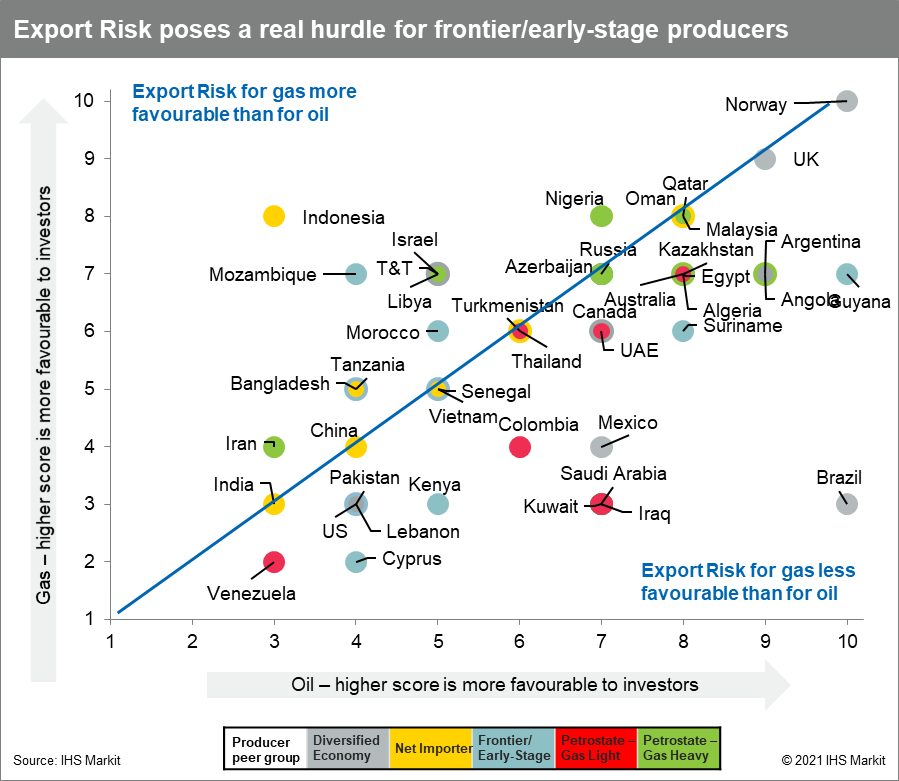 For major gas-heavy producing states, the availability of existing infrastructure and low-cost, sizeable resources provides some reassurance of an ongoing competitive advantage, even in a slower growth market, suggestion that business as usual may still be an option for this elite group. Net importer states may not have export infrastructure to hand and are more likely to limit access to international markets due to domestic supply obligations, which can deter external investment interest; set against that they do have the advantage that host governments have a greater role in balancing upstream policy with approaches to energy demand, providing some reassurance for investors over future appetite for gas.

Given current investor and finance trends, host governments' abilities to tailor above-ground enablers to differentiated risk profiles will be more important than ever in determining which projects move forward and which resources are left in the ground.

Learn more about our coverage of E&P terms and above-ground risk at ihsmarkit.com/PEPS.