The ongoing spike in European natural gas prices has raised the question of whether oil products including LPG can be substituted for gas to help alleviate market pressures. In the case of LPG, the only significant switching available is within refineries, which can increase their use of propane as a process fuel. It is theoretically possible for enough propane to be used to have a significantly impact on propane prices in the region. The fact that propane is now trading at a significant discount to natural gas indicates that in practice the volume of refinery fuel switching (and the impact on LPG markets) has been more minor. In Asia, there is more direct competition between natural gas and oil products including LPG; in China, some industrial facilities can still switch between natural gas and LPG, but the trend is towards less and less of this capacity as regulations increasingly forbid it.

A spike in European natural gas prices starting in July 2021 has raised the unusual specter of parity or even premium to oil products on a $/MMBtu basis. Historically, natural gas has normally traded at a steep discount to crude oil and refined product prices. Since propane and butane prices tend to correlate closely with refined products, natural gas normally is priced as a discount to these as well. In Asia, import dependence and a high reliance on LNG have at times led to periods of closer competition, and in some cases even direct switching between gas and certain oil products. Direct competition is much rarer in Europe, leaving a limited scope for fuel switching to alleviate market pressures and allow natural gas prices to recede.

There are several factors driving the spike in European natural gas prices. Restrictions on Russian gas exports and high LNG demand in Asia pulling cargoes away have limited supply. This has been combined with rising carbon emissions credit prices limiting coal-fired power generation and increasing the price at which natural gas will continue to be the preferred source. With high gas demand and restricted supply, prices rose sharply and look to remain high for months to come (Figure 1). 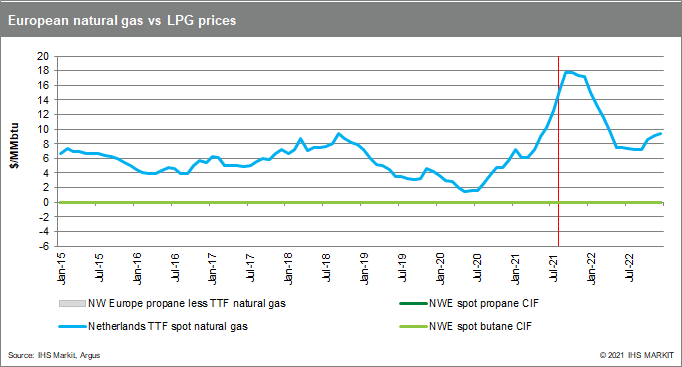 In general, direct competition between natural gas and oil products is most common in power generation, where power plants using fuel oil or diesel can be ramped up (and gas-fired plants shut down) when relative prices favor this. Direct competition between gas and LPG is less common, except in parts of Asia. In Japan, propane is used as a backup fuel for gas-fired power plants and could be substituted in some cases for pricing reasons. At certain points, we have seen industrial manufacturing plants in southern China and South Korea switch to LPG, although there are reasons to believe this will decline in the future.

In Europe, there is very little oil-fired power generation capacity remaining in most countries, and industrial facilities for the most part do not have the ability to switch between natural gas and other fuels. The only significant switching capacity in Europe is within refineries. If the price of natural gas exceeds the value of propane produced within the refinery (and normally sold externally), then it makes sense to use the propane internally. The net effect is to lower propane supply into the local market.

Figure 2 shows the use of gas and LPG as fuel within European refineries (in this case the 19 countries of the euro currency area). Since the start of 2015, refineries in these countries have consumed about 67 times as much gas as LPG, on a metric tons of oil equivalent basis. The amount of this that can be replaced by propane is limited by propane availability and alternative disposition for the refinery gas. 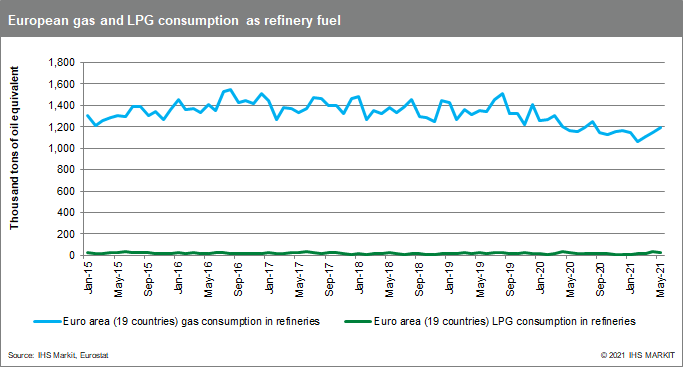 Just how much propane will be used as a refinery fuel during this period of gas price premiums remains uncertain, as does the magnitude of the resulting impact on the LPG market in Europe. The picture will not become clear until data on refinery fuel for July/August are released.

Because we have not seen rising natural gas prices continue to pull propane prices upward (Figure 1), the evidence suggests that the actual reduction to European propane supply has been modest. Despite global market tightness, Europe has enough supply diversity (and demand elasticity) for markets to adjust to at least some lower refinery LPG production without major impacts on price.

The impact of refinery LPG use will not be evenly distributed. Refinery supply accounts for a smaller share of the total LPG market in the large coastal markets with access to large-scale waterborne imports. Inland, in Central and Eastern Europe, there are areas where refinery production constitutes a larger share of total supply. In general terms, refinery propane accounts for about 20-25% of total supply in Western Europe and 45-50% in Eastern Europe—even higher than this in some smaller markets including Austria, Czechia, Hungary, and Romania.

To the extent that a large volume of refinery LPG production is being diverted away from external sales, we would expect to see a larger impact on local prices in these markets. As with supply and demand, border price data from July and August are still limited. Going by the major marker prices in the region, we have not seen a spike that would indicate major restrictions on supply. The price of propane at Brest, Poland, has moved back into a premium over Northwest Europe, with the premium averaging $35 per metric ton in August 2021. However, this is still lower than premiums reached in 2020 and well within the norm that has emerged since Russian exports via Ust-Luga have been restricted. This result indicates that restrictions on refinery propane supply may have been limited in Poland and possibly also Czechia, Slovakia, Austria, and Hungary. The price of propane FOB at the Black Sea also registered an unusual premium to Northwest Europe in August, which could indicate locally higher refinery propane use in Turkey, Romania, and Bulgaria.

In the past, many industrial plants in southern China used LPG as their primary fuel source for local power generation and/or process fuel. As natural gas supply expanded, many of these facilities were linked to gas distribution networks but still retained LPG storage tanks and the ability to switch back if needed. For most of these private sector gas users, the gas they were buying was imported as LNG and regasified. State-owned industrial plants mostly are connected to domestic gas production, which is subject to price controls. The price of LNG-based natural gas is not subject to these controls, so there were several periods in 2017-19 when the cost of LPG became competitive with natural gas for these private sector users. This result led to some "reverse switching" from gas to LPG that made headlines and contributed to Chinese LPG import demand.

As the gas pipeline network in China has continued to expand in recent years, the switching market keeps decreasing. This is in fact now mandated: once an industrial user gets connected to the natural gas, LPG will be swept out from the burning system:

There are still some exceptions remaining. In some specific areas of Guangdong province, industrial users can still keep dual-fuel burning systems that are capable of using natural gas or LPG. Based on a rough estimate, we believe that the eastern part of Guangdong province now represents most of the remaining switch market volume in China, and in the industrial LPG consumption scale there is only about 500,000-600,000 metric tons per year. So even when prices favor switching, the volume should be very limited.

Similar to the reasoning used above for Europe, if the switch volume were large enough in Guangdong we should see LPG prices rise toward parity with LNG, but this is not happening. LNG prices have remained at a premium to LPG and will likely continue to do so until LNG markets come into greater balance. In summary, switching is still happening in China, but the volume is not large enough to effectively impact either LPG or LNG. There are other areas in Asia where greater direct competition may still remain, and this will be explored in another upcoming Insight from the IHS Markit Midstream Oil and NGLs team.