Exploration frontiers in the Offshore of Guyana and Suriname

The recent exploration successes in offshore Guyana and Suriname in the last three years have resulted in a significant oil boom within the region. While Guyana's Stabroek Area and Suriname's Block 58 continue to uncover significant oil reserves, operators of surrounding blocks are hoping to replicate such success in their own acreage. The governments of Guyana and Suriname seek to facilitate greater exploration by hosting bid rounds with acreage in deep and shallow water regions with the anticipation that an expansion of exploration and production (E&P) success in other blocks will allow for a competitive long-term oil market to develop.

Guyana's Ministry of Natural Resources is preparing to launch a bid round in late 2022, which may also include acreage in the Guyana Basin. The deep-water acreage designated broadly as Area C, located north of the Canje block and east of the Kaieteur block, could be included in the licensing round. To date, no drilling or 3D seismic surveys have been conducted in the Area C acreage. Other potential acreage could be the Demerara and Berbice blocks, to be relinquished by CGX Energy - official date has not been released. The Demerara block is located in the shallow waters, on the southwest side of the Stabroek Area and northwest of the Orinduik block. Prior to announcing plans to relinquish the Demerara block, CGX Energy had identified multiple prospective leads from a 2014 3D seismic survey and had plans to drill its first new-field wildcat (NFW), Makarapan 1. However, the plans to drill the Makarapan 1 were cancelled as part of the operator's decision to focus on exploration operations in the Corentyne block. The Berbice contract is located primarily onshore along the southeastern edge of the country, with five wells drilled as far back as 1941 and as recent as 2005 but no discoveries were made.

In Suriname, two bid rounds are planned for late 2022 and mid-2023. The Demerara 2022 Bid Round will be the first, centering around the open acreage of the deep waters area that covers a geologically defined structure that is the bid round's namesake known as the Demerara Plateau, which is not to be confused with the contract block in Guyana under the same name. Previous drilling in this portion of the Guyana-Suriname Basin was undertaken by multiple operators, most notably Tullow Oil and Kosmos Energy. One non-commercial gas discovery was made by Tullow in 2017, with the Araku 1 NFW located in Block 54, and three 3D seismic surveys have been conducted in the area during 2012-15. The northeastern portion is part of the Demerara Plateau that has not been drilled nor had 3D seismic surveys conducted. Petroleum systems have not been properly defined but proposed plays include the Upper Jurassic to Lower Cretaceous sediments and pre-Albian aged carbonates. The 2023 shallow water bid round will involve the open acreage not awarded in the 2021 SHO bid round namely blocks 1, 2, 3, and 4. While no 3D seismic surveys have been conducted in the area, four NFWs have been completed, with one reported to be dry and three (I/23 1, B/34 1, and Electric Ray 1) resulted in hydrocarbon shows but no discoveries.

Through these bid rounds, the governments of Guyana and Suriname have made it clear their intentions to thoroughly assess their hydrocarbon potential. Underexplored areas such as the deep waters of the Guyana-Suriname Basin and the Demerara Plateau will require extensive 3D seismic surveys to properly determine exploration opportunities, should operators be awarded the acreage. Shallow water acreage will continue to be an area of focus with previously awarded acreage being assessed and the petroleum systems explored. 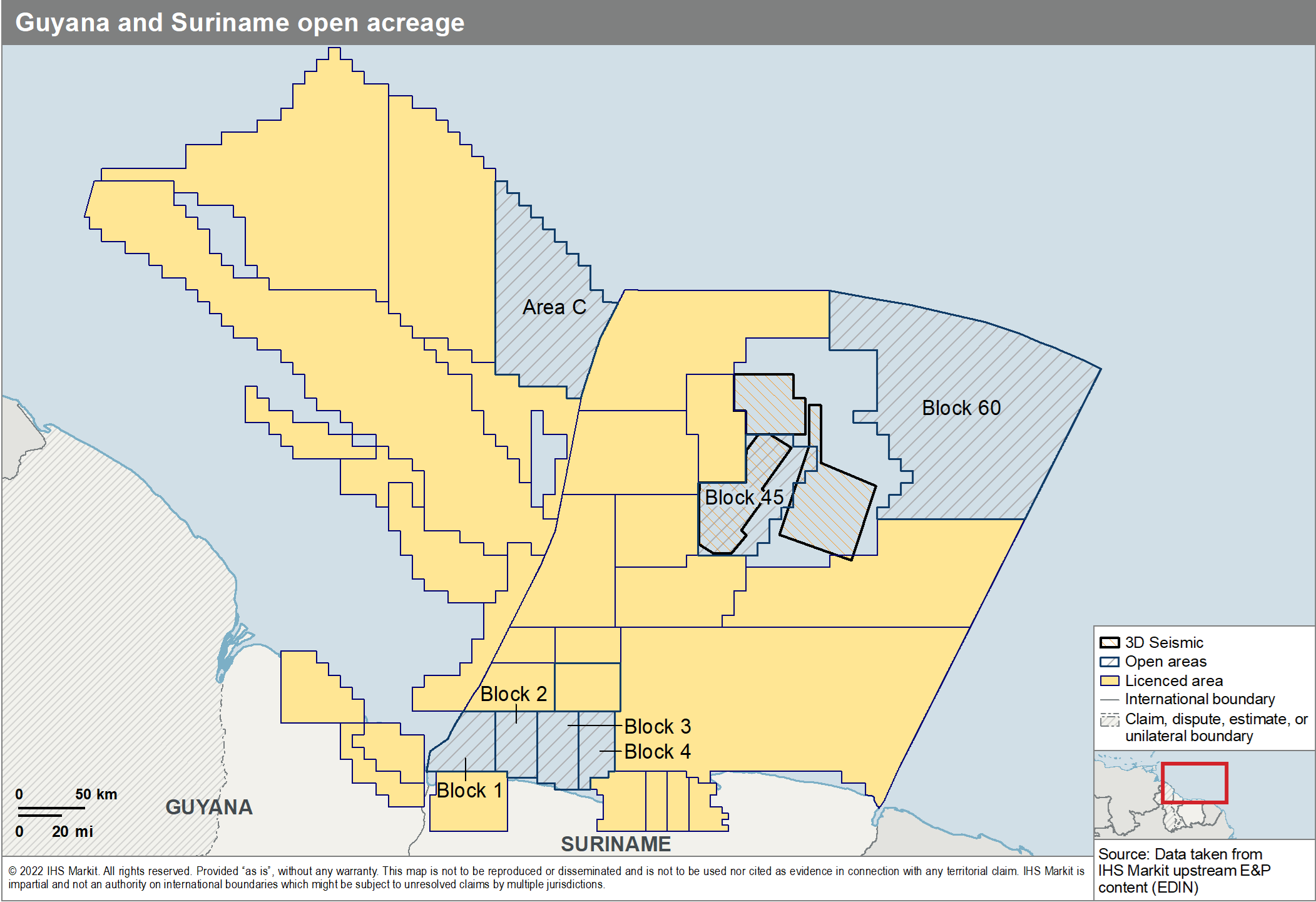