The disposition of crude oil from Russia has several outlets. A critical outlet for Europe is via the Druzhba pipeline. The Druzhba pipeline delivers crude oil from Russia to Poland and Germany through Belarus, Hungary, Slovakia, and Czech Republic via Ukraine. However, if the situation escalates further and impacts Russian crude oil exports, where can the surplus Russian barrels go? Are there alternative routes that Russia can redirect the pipeline flow to beyond Europe? Is incremental offtake to the east and mainland China an option?

The following map illustrates existing Russian oil related infrastructure, highlighting oil pipelines, refineries, and oil storages that are currently operating. For level setting purposes, Russia has an export capability of 11 MMb/d for crude oil and refined products, and a total operating oil storage capacity of 96.8 MMbbl. The largest crude oil storage is the 10.6 MMbbl Omsk Refinery owned by Gazprom Neft, followed by a 7.3 MMbbl Novorossiysk Marine Terminal, owned by Caspian Pipeline Consortium. However, Russia does not own and operate an SPR. While an SPR enables a country to stock up crude for times of supply shortage, it also can in this circumstance, soak up the immediate surplus. Without SPR, Russia theoretically has less supply flexibility and can only manage downstream consumption decreases by production cuts. Correspondingly, if the Russian crude oil exports are reduced, alternative outlets are minimal to nil in-country. 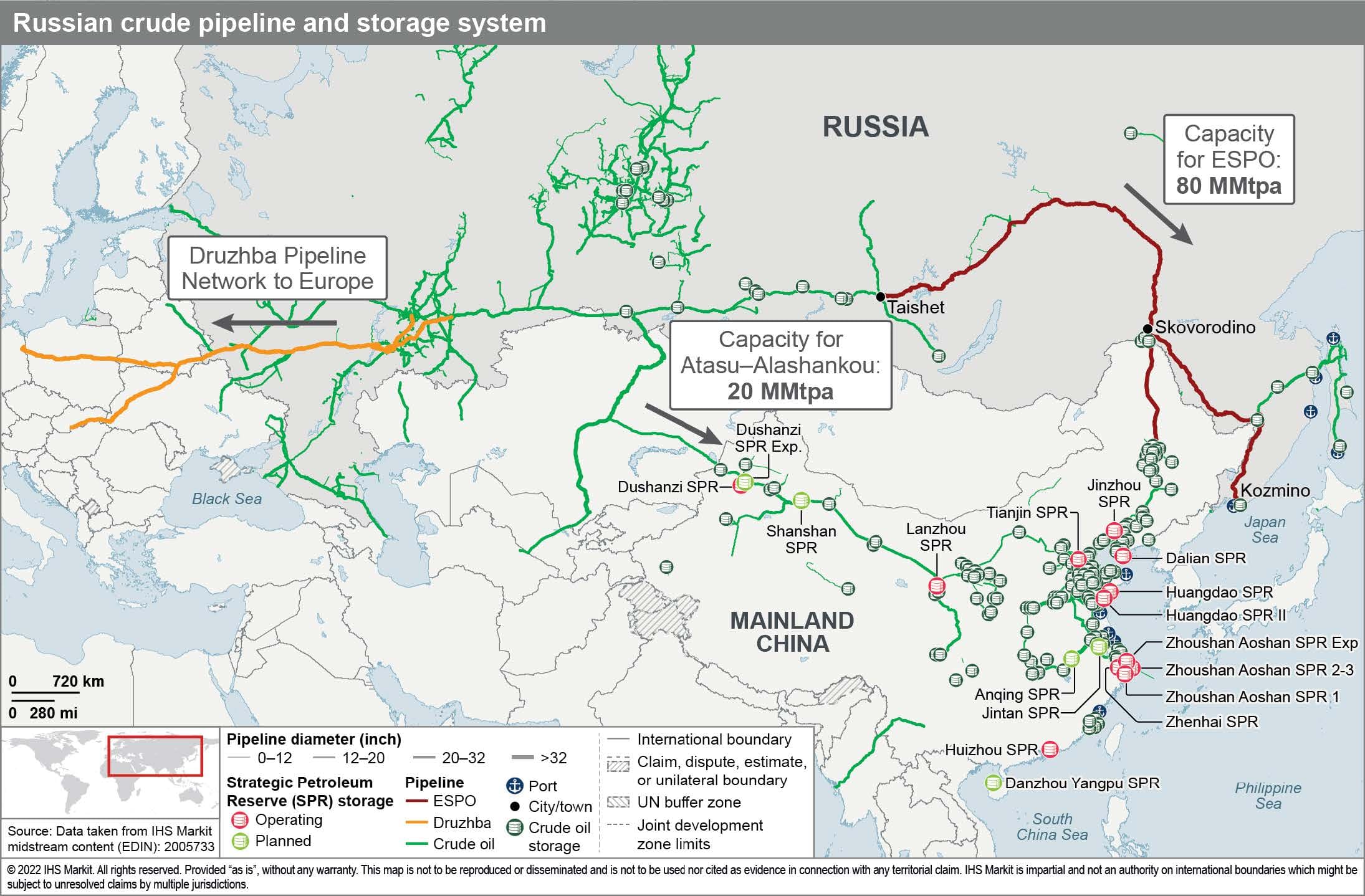 In contrast to Russia's lack of crude oil storage facilities, its neighboring country and biggest oil consumer mainland China has 12 SPR sites in operation totaling 249.7 MMbbl and is contemplating another 5 more going forward. Russia exports nearly 50% of its crude oil and refined products via long-distance pipelines with the balance waterborne liftings and trade. It has the two longest oil pipelines in the world, the Druzhba to the west, and the east, the ESPO oil pipeline. In addition to these major pipelines waterborne crude oil liftings via Very Large Crude Carriers (VLCCs), medium-size Aframax tankers, and other vessel sizes and types provide additional Russian crude oil disposition options. The focus here is on the east side of Russia and the ESPO oil pipeline. The following map shows Russia's pipeline export route to Asia via the ESPO oil pipeline. The 4,857-km ESPO oil pipeline starts from Taishet in eastern Siberia, sending oil to the Pacific Ocean terminal at Kozmino. The ESPO oil pipeline was built and operated by Russian pipeline company Transneft and construction of the pipeline started in 2006 and was completed in 2012. 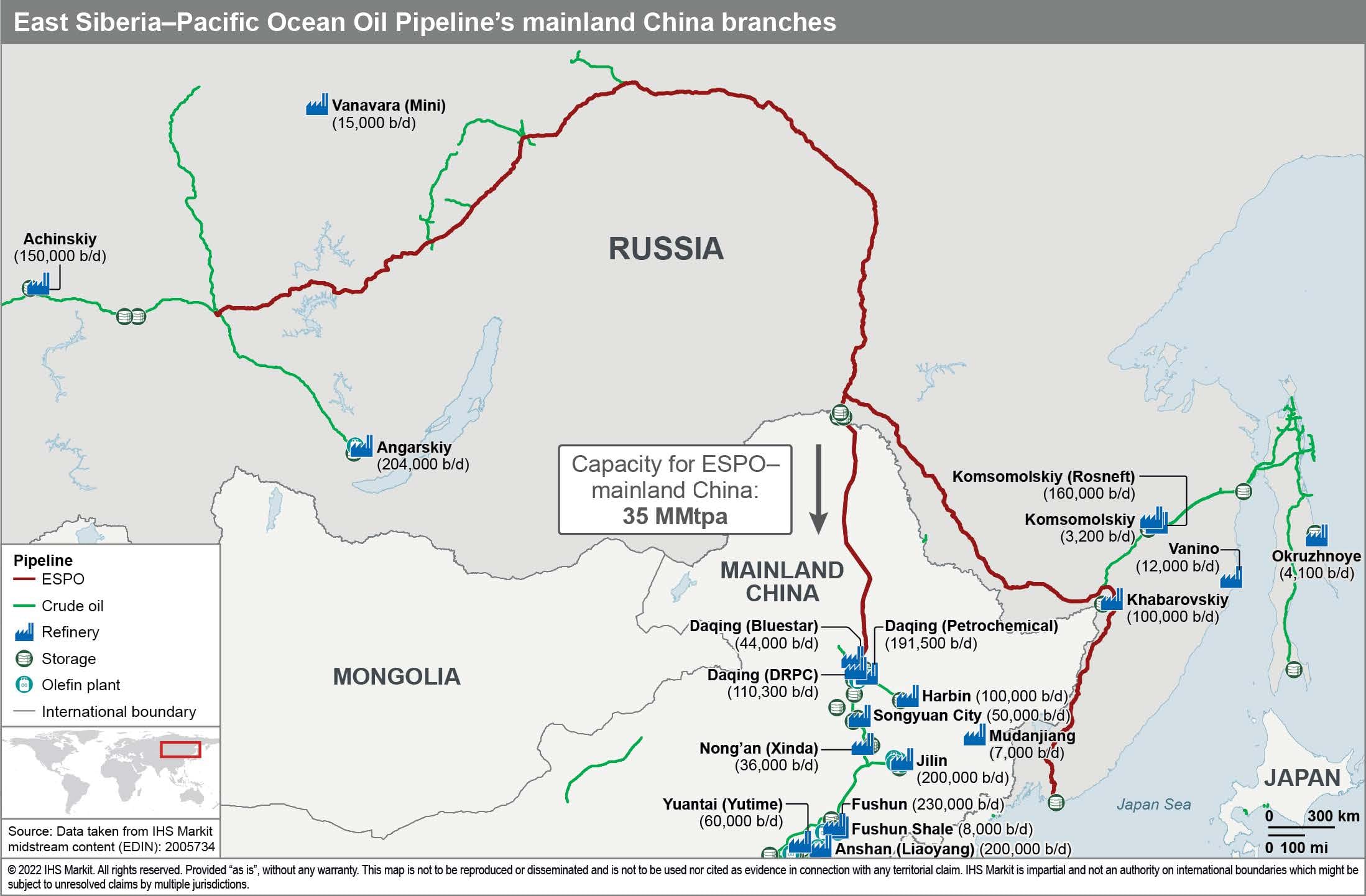 The ESPO oil pipeline is the key route of Russia oil to reach its key consumers in Asia, including mainland China, Japan, and South Korea. Under the current Russia-Ukraine war situation, Japanese and South Korean companies have backpedaled trading activities with Russia, while mainland China remains to be an outlet for Russian oil.

Deliveries of Russian oil via the ESPO oil pipeline to mainland China started in 2011. Crude oil is injected into the 942-km mainland China branch of the ESPO oil pipeline and further into the Northeastern oil pipeline network. The mainland China branch pipeline was built and is currently operated by the China National Petroleum Corporation (CNPC) with an initial annual transportation capacity of 15 million metric tons (MMt) per year, approximately 0.3 MMb/d1. CNPC launched several projects to lift the capacity to 20 MMt to date. To further strengthen its oil connection with Russia, mainland China built a parallel line in 2018 to receive an additional 15 MMt from Russia each year. The two lines currently have a combined annual capacity of 35 MMt per year (MMt/y), approximately 700,000 b/d.

Crude oil import by ESPO has made Russia the largest oil exporter to mainland China, overtaking Saudi Arabia. In 2021, Asian refineries imported 2.4 MMb/d or about 120 MMt/y of Russian oil via the ESPO oil pipeline and waterborne routes, with over 80% of the oil delivered to mainland China. 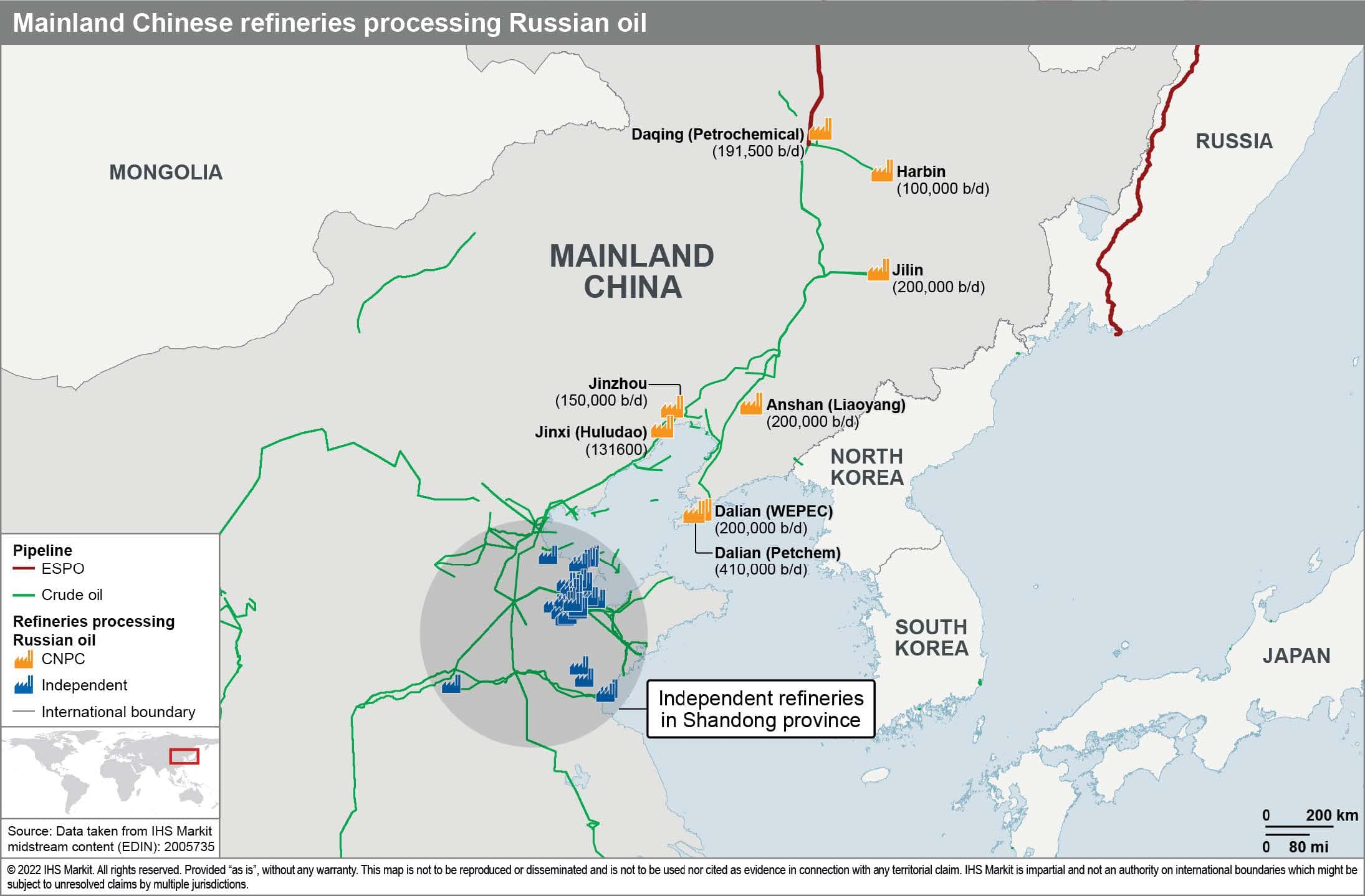 Mainland China has currently a total of 38 independent or so-called tea-pot refineries with a combined capacity of 2.53 MMb/d, approximately 126 MMt/y. This figure excludes those refineries that have been acquired by large companies such as by ChemChina and Norinco. ESPO is the blend at these refineries, followed by the Urals. IHS Markit research shows ESPO import ranges from 1.5-2.5 MMt per month via ports at the Shandong coast.

In summary, we believe that the ESPO pipeline is a critical route for Russian oil to reach its key consumer, mainland China. However, this pipeline seems to be at its capacity even before the Russia-Ukraine crisis, and it is unlikely for Russia to be able to increase its existing supplies to mainland China via this route. The other pipeline, the Atasu-Alashankou Pipeline, has limited spare capacity. The insufficiency in oil transmission capacity will force Russian barrels to take sea routes to mainland China if Russian ships continue to be diverted from countries that have imposed self-sanctions on Russian crudes. Chinese demand for seaborne Russian crude—particularly the ESPO blend and Urals—will remain stable because these are the preferred grades run by most of the independent/large refineries that are owned and operated by national oil companies.

Get first-hand experience on our Oil Markets, Midstream, and Downstream Demo Hub