E&P activity in the Romanian and Bulgarian waters of the Black Sea: Where do we go from here?

With some 1,150 m in length and 600 km in width, the Black Sea covers an area of approximately 413,000 sq km binding Eastern Europe to Western Asia. It is surrounded by six countries: Bulgaria, Romania, Ukraine, Russia, Georgia and Turkey. A maximum depth of more than 2,200 m is reached in the south-central sector of the sea. The Black Sea adjoins the Mediterranean Sea via the Bosphorus Strait to the Sea of Marmara and then via the Dardanelles Strait to the Aegean Sea, part of the Mediterranean Sea. From a geological point of view the Black Sea is predominantly situated in the Black Sea Basin which comprises two extensional areas, the Western and the Eastern Black Sea sub-basins. These sub-basins are separated by a major rift shoulder; the Mid Black Sea High. The western Black Sea is considered more gas prone while the east is dominated by oil. In Romania the offshore drilling started in the mid-1970s and since then about 100 exploration wells have been drilled. The drilling activity offshore Bulgaria started in the mid-1980s and some 30 exploration wells have been drilled so far. As of the early 1990s the Romanian and Bulgarian waters of the Black Sea saw a growing interest from IOCs (International Oil Companies) with drilling operations conducted further from the coast in deeper waters. The purpose of this review is to summarize what has been done in the past, how incoming IOCs impacted the E&P scene and envision the future operations. 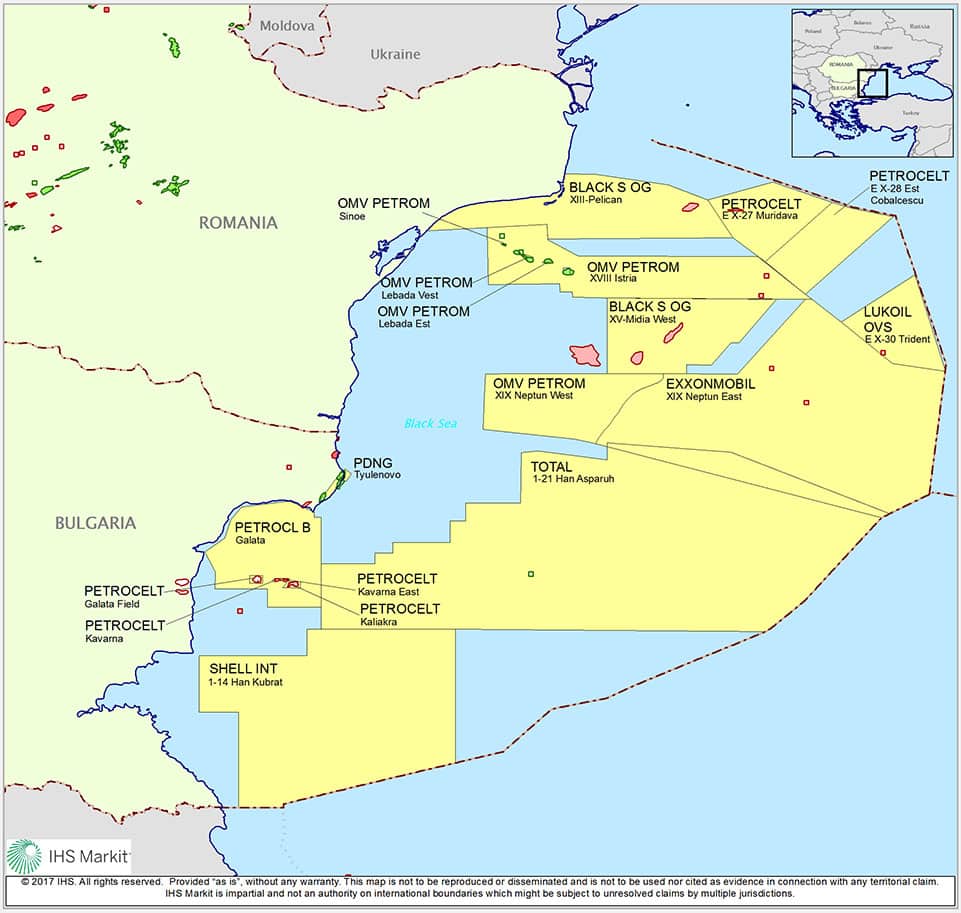 To date a total of six discoveries have been made offshore Bulgaria, none of them are currently producing.

The exploration drilling activity in Bulgaria started in 1984 when COMGEO (Bulgarian Committee of Geology) spudded the Samotino Iztok exploration well about 25 km off the coast in a water depth of some 40 m. The well was drilled to a total depth of 3,400 m and abandoned with gas shows. The first discovery was made one year later with Samotino More 1. The well was drilled about 7 km north of the Samotino Iztok well in a water depth of 50 m and to a total depth of 3,648 m. Gas and condensate were tested below 1,760 m but the pressure decreased too rapidly to achieve commercial rates.

In 1991 Texaco started its activity in the Bulgarian Black Sea when it was awarded one offshore block. Two years later, the company made a gas discovery with the Galata 1 exploration well drilled in a water depth of about 35 m. The well was targeting Valanginian sandstones with a planned total depth of 2,500 m but it discovered an unexpected Middle Miocene reservoir. In 1996 Texaco confirmed the discovery with the Galata 2 appraisal well, however, in 1998 the company decided to exit the licence. Consequently Petreco took operatorship of the licence and drilled two successful development wells in 2004 with the field coming onstream the same year. In 2006 the gas production at the Galata field peaked at approximately 61,000 Mcf/d from which point the output started to decline until 2015 when production ceased. It was the first commercial offshore discovery to be developed in Bulgaria.

In 2008 Melrose (which became Petroceltic in 2013) made the Kaliakra and the Kavarna gas discoveries 15 km and 7 km east of the Galata field respectively in a water depth of about 50 m. Distant from some 7.5 km, the Kalikakra 1 and the Kavarna 1 discovery wells are very similar; both wells intercepted the reservoir at a depth of more than 800 m which is represented by the Maastrichtian Dobrina Formation and the Paleocene Kornarevo Formation. Both formations form a single reservoir system. The fields were put onstream in late 2010 and reached a peak in gas production in 2012 with some 25,500 Mcf/d. Both fields ceased production in 2014.

The mid-2010s saw the entry of two major companies offshore Bulgaria; Shell and Total (with partners Repsol and OMV). Total drilled Bulgaria's first deep offshore well, Polshkov 1, in the 1-21 Han Asparuh permit in 2016. The well is situated in a water depth of more than 1,900 m some 130 km from the shore. The well reached a total depth of 5,615 m likely terminating in the Jurassic. Total declared the well as an oil discovery but did not release any additional information. Former operator of the licence, OMV, conducted two 3D seismic surveys between 2013 and 2014 totaling some 11,000 sq km.

In 2017 the other major company, Shell, completed a 5,400 sq km 3D seismic survey in the 1-14 Han Kubrat licence of which two-thirds of the area covers deep water. 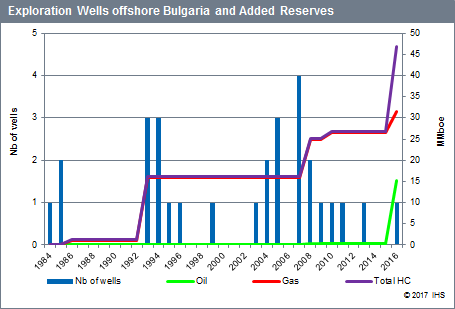 Figure 2: Number of spuds and the volume of hydrocarbons discovered by year offshore Bulgaria

To date a total of 17 discoveries have been made offshore Romania with five currently producing and five others under an appraisal or development programme.

The first known drilling activity offshore Romania dates back to 1976 when Petrom spudded the Ovidiu 1 exploration well. The hole was drilled about 110 km from the coast in a water depth of some 80 m. Ovidiu 1 reached a total depth of more than 5,000 m and was abandoned with gas shows the following year. The first discovery was made by MMPG (Ministry of Mining Petroleum and Geology) with the Lebada Est 8 exploration well in 1980. Lebada Est 8 was drilled to a total depth of 3,542 m terminating in Lower Cretaceous limestones. The well encountered oil in the Upper Cretaceous and gas in the Eocene. The well produced at low rates and was not considered to be commercial, however, following successful appraisal oil and gas production was possible.

Between 1980 and 2007 the national oil companies (MMPG and Petrom) discovered five fields which are currently producing offshore Romania: Lebada Est (oil & gas), Lebada Vest (oil & gas), Sinoe (oil & gas), Pescarus (oil & gas) and Delta 4 (oil). This group of fields is located approximately 75 km from Constanta harbour in a shallow water depth ranging from 40 to 50 m. In a geological sense the fields are on the same structural trend with reservoirs situated in the Lower and Upper Cretaceous and in the Eocene.

The first commercial oil and gas production offshore Romania started in 1987 at the Lebada Est field followed by the Lebada Vest field which came onstream in 1992. The Sinoe, the Pescarus and the Delta 4 fields commenced production in 1999, 2003 and 2009 respectively.

Currently there are four international companies holding offshore acreage in the Romanian waters of the Black Sea: Lukoil, Black Sea Oil & Gas, Petroceltic and Exxon Mobil which is the most active company. The national company OMV Petrom operates two blocks in the Black Sea.

ExxonMobil's involvement in the Romanian Black Sea started in late 2008 when it became partner of OMV Petrom in the XIX Neptun East block. In 2009 OMV Petrom conducted a 3,210 sq km 3D seismic survey which at the time was the largest area covered by a 3D seismic offshore. The data interpretation lead to the drilling of the Domino 1 exploration well which was drilled between late 2011 and early 2012 some 170 km off the Constanta harbour in a water depth of 930 m. The well discovered a net pay of 70.7 m below 2,500 m in the Dacian. The early estimation of gas reserves ranging from 1.5 to 3 Tcf was later revised by local reports to 4 Tcf. Following this significant discovery ExxonMobil took operatorship of the block while OMV Petrom remained as a partner. In 2013 the group then completed an additional 3D seismic survey covering almost twice the size of the one recorded in 2009 and in 2014 work started on a seven well drilling campaign on the block which ended in 2015. The drilling programme, which included two appraisal wells of the Domino discovery, resulted in two successful wells; Domino 4 and Pelican South 1. The latter was drilled in 2015 about 20 km north of the Domino discovery in a water depth of 128 m. Pelican South 1 found gas with reserves estimated at some 0.7 to 0.9 Tcf and was appraised the same year but the well's result was not communicated.

Melrose (Petroceltic since 2013) became a new player in 2010 when it was granted the E X-28 Est Cobalcescu and E X-27 Muridava blocks. The company drilled one well on each block between 2013 and 2014 which were both abandoned. Prior to this drilling campaign Melrose conducted a 3D seismic survey on both blocks totaling 1,930 sq km.

Lukoil entered the country in 2011 when it was awarded the E X-30 Trident and E X-29 Est Rapsodia blocks. The latter was relinquished in 2016 following the disappointing result of Helena 1X. In 2015 the company drilled two consecutive wells in the E X-30 Trident block resulting in one gas discovery with Lira 1. The well was drilled some 195 km from Constanta harbour in a water depth of 700 m to a total depth of 2,700 m. Lira 1 unlocked a 46 m gas interval reservoir in the Miocene to Pliocene with reserves which could exceed 1 Tcf of gas.

Black Sea Oil & Gas (formerly Midia Resources) is the current operator of the XV-Midia West and XIII-Pelican blocks. The XIII-Pelican block contains the Eugenia 1 discovery made in 2012 but never appraised. Black Sea Oil & Gas completed in 2016 a 3D seismic survey on the XV-Midia West block which contains the Ana and Doina discoveries made respectively by Midia Resources in 2008 and by Enterprise Oil in 1995. 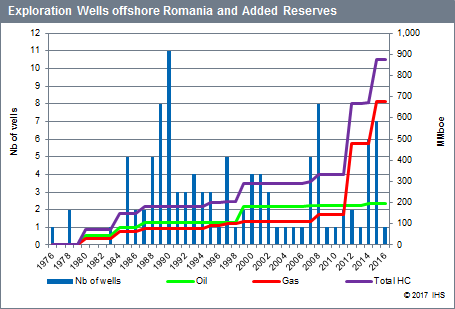 Figure 3: The number of spuds and the volume of hydrocarbons discovered by year offshore Romania

This non-exhaustive summary of the E&P activity in the Romanian and Bulgarian waters of the Black Sea highlights the important role played by international companies in recent years. These companies have introduced the technology to drill at deeper depths contributing to finding new deposits and increasing potential reserves. Companies like Total, Shell, Exxon Mobil, Lukoil and Black Sea Oil & Gas have all achieved recent success with more work planned:

The various planned projects show that interest is still high offshore Romania and Bulgaria and the activity is definitely moving forward in the Black Sea. Now the challenge facing the industry is to develop and turn the discoveries into producing fields despite current market conditions.

#upstream - #Mozambique is celebrating the shipment of its first #LNG cargo from the offshore Coral South field in… https://t.co/FrXBSsVLWf

Nov 25
{"items" : [ {"name":"share","enabled":true,"desc":"<strong>Share</strong>","mobdesc":"Share","options":[ {"name":"facebook","url":"https://www.facebook.com/sharer.php?u=http%3a%2f%2fwww.spglobal.com%2fcommodityinsights%2fen%2fci%2fresearch-analysis%2fep-activity-in-the-romanian-and-bulgarian-waters-of-the-black-sea-where-do-we-go-from-here.html","enabled":true},{"name":"twitter","url":"https://twitter.com/intent/tweet?url=http%3a%2f%2fwww.spglobal.com%2fcommodityinsights%2fen%2fci%2fresearch-analysis%2fep-activity-in-the-romanian-and-bulgarian-waters-of-the-black-sea-where-do-we-go-from-here.html&text=E%26P+activity+in+the+Romanian+and+Bulgarian+waters+of+the+Black+Sea%3a+Where+do+we+go+from+here%3f","enabled":true},{"name":"linkedin","url":"https://www.linkedin.com/sharing/share-offsite/?url=http%3a%2f%2fwww.spglobal.com%2fcommodityinsights%2fen%2fci%2fresearch-analysis%2fep-activity-in-the-romanian-and-bulgarian-waters-of-the-black-sea-where-do-we-go-from-here.html","enabled":true},{"name":"email","url":"?subject=E&P activity in the Romanian and Bulgarian waters of the Black Sea: Where do we go from here?&body=http%3a%2f%2fwww.spglobal.com%2fcommodityinsights%2fen%2fci%2fresearch-analysis%2fep-activity-in-the-romanian-and-bulgarian-waters-of-the-black-sea-where-do-we-go-from-here.html","enabled":true},{"name":"whatsapp","url":"https://api.whatsapp.com/send?text=E%26P+activity+in+the+Romanian+and+Bulgarian+waters+of+the+Black+Sea%3a+Where+do+we+go+from+here%3f http%3a%2f%2fwww.spglobal.com%2fcommodityinsights%2fen%2fci%2fresearch-analysis%2fep-activity-in-the-romanian-and-bulgarian-waters-of-the-black-sea-where-do-we-go-from-here.html","enabled":true}]}, {"name":"rtt","enabled":true,"mobdesc":"Top"} ]}
Filter Sort