As in many other parts of the world, oil and gas exploration in Latin America saw a dramatic decrease in the middle of the decade. Considering the number of wildcats spudded each year since 2008, conventional activity reached a historic low in 2016 with fewer than 100 wells drilled in the entire region. The decrease was particularly significant in the deep offshore, with only 17 wells reported in 2016, and notably in Brazil where no deepwater wildcats were drilled that year. The main reason for the decline was the fall in oil prices that started in mid-2014. In the case of Brazil, the economic crisis and the difficult financial situation of state oil company Petrobras put further pressure on the country's upstream scene. Overall, activity is now steadily increasing and despite a volume of drilling far below the 2008 level, companies have regained confidence and new exploration areas have opened up. In the deep offshore, formerly largely dominated by Brazil, other areas have emerged, in the Atlantic Ocean, but also in the Caribbean Sea and along the Pacific coast.

Over the past 12 years, despite the dominance of onshore activity in the number of discoveries in the region (see first graph), the deep offshore sector has been the largest contributor in terms of reserves (see second graph). The most outstanding year was 2010, with a total of almost 20 Bboe for the Brazilian pre-salt Buzios, Libra and Mero finds alone. Without disregarding the notable results achieved by ExxonMobil and partners offshore Guyana, where over 5.5 Bboe have been discovered since 2015, the order of magnitude is different and upcoming work offshore Brazil is eagerly awaited. While the operations conducted so far in 2019 have mainly focused on the appraisal of the Carcara discovery in the Santos Basin and of a 2012 discovery in the Sergipe-Alagoas Basin, many companies have requested permission to proceed with deep offshore exploration. 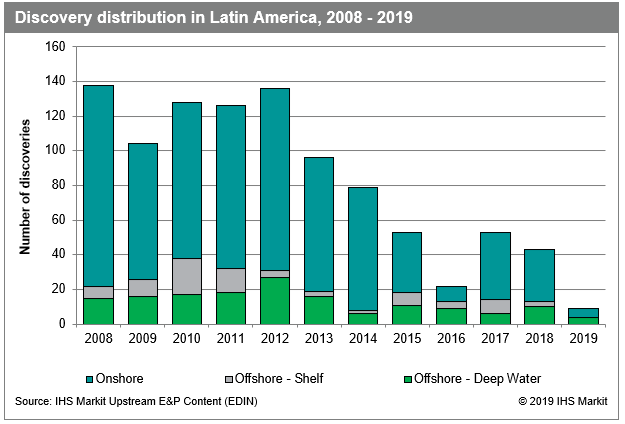 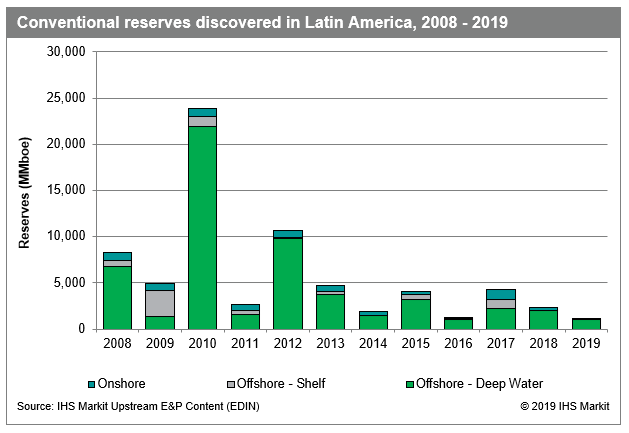 The international interest in Brazil's offshore oil and gas potential grew stronger with the First Pre-Salt Bid Round in 2013, which saw Shell, Total, CNPC and CNOOC joining operator Petrobras for the assessment and development of the Libra resources in the Santos Basin. Seven oil and gas tenders followed, with varying degrees of success, and beginning in 2017, thanks to clear incentives for foreign investors and signs of recovery in commodity prices, the country drew more attention. In 2018, the 5th PSC Pre-Salt Round resulted in the award of all four blocks, with Shell, ExxonMobil, BP and Petrobras retained as operators, and four other companies joining as partners. While the highly-anticipated Transfer of Rights PSC Bid Round is planned for later in 2019, this year should already see an increase in exploration activity, primarily in the pre-salt play of the Campos and Santos basins, and possibly in other basins as well. Drilling permission has been requested for up to 53 exploration wells in the pre-salt area and tentatively, 10 to 15 wells could be drilled. Concerning blocks in the eastern and equatorial margin basins, environmental permits were pending for at least 51 prospects at the beginning of the year.

While exploration offshore Brazil is slowly ramping up, other territories have seen increased interest and activity in recent years. Further west along the Equatorial Atlantic margin, ExxonMobil has so far reported 13 deepwater discoveries in Guyana and current operations are focused on appraisal work at the Hammerhead discovery and development drilling on the Liza field, where first oil is anticipated in early 2020. Although the efforts conducted elsewhere in the Guyana Basin have brought mixed results so far, new exploration wells are planned in the near future. Notably, Tullow Oil is preparing to test the Jethro-Lobe and Joe prospects in the Orinduik Block. In neighboring Suriname, Apache has contracted the "Noble Sam Croft" drillship for one firm well plus three options in Block 58, starting in July, and Kosmos is planning to test the Walker carbonate prospect in Block 42 in 2020.

With the opening of the energy sector to private and foreign investors, Mexico's upstream has seen the arrival of many international companies since 2015, and exploratory drilling is expected to significantly increase in 2019, both onshore and offshore. The deep offshore area has been sparsely explored so far and the largest oil discoveries currently consist of Trion 1 and Exploratus 1 in the Perdido Fold Belt, made by PEMEX in 2012-2013. The operatorship of Trion has since changed, with Australia's BHP now holding 60% interest and the state oil company the remaining 40%. Trion 2DEL, spudded in November 2018, was the first well to be drilled by an international operator in deep offshore Mexico, and a second outpost is slated for later in 2019. Overall, some 50 exploration wells are anticipated to be drilled offshore. The first deepwater wildcat was spudded in January by Total and the "Rowan Renaissance" drillship has since moved to the Campeche Deep Sea Basin to drill the high-impact Yaxchilan Este 1 well on behalf of Petronas.

Offshore Trinidad and Tobago, the deepwater Le Clerc 1 gas discovery in 2016 has prompted BHP to undertake a multi-well exploration campaign to further test the Magellan play. Operations are ongoing in almost 2,000 m of water, using the "Deepwater Invictus" drillship. No further deepwater wells are currently being drilled in the region, but other areas may see future activity. In Colombia, the conversion of Technical Evaluation Agreements into E&P contracts is ongoing in the Caribbean Sea. Anadarko, which is in the process of being acquired by Occidental, is reportedly in discussions with the authorities to convert four licenses. In 2015-2017, the US company drilled four successful wells in over 1,500 m of water, notably Gorgon 1, which is estimated to have uncovered 1 Bboe of gas. Meanwhile, Ecopetrol has signed for Block COL-5, followed by the awards of Blocks COL-3 and GUA OFF-3 to Shell and Blocks COL-4 and GUA OFF-1 to Repsol.

Recent developments in more frontier areas may also lead to further deep offshore exploration. Equinor has reached a farm-out agreement with Cairn Energy for its four blocks located off the Pacific coast of Nicaragua. The acreage covers an area of 16,000 sq km in the Sandino Basin and a first well could be drilled as early as 2020. Further south, off the coast of Peru, deepwater drilling may also take place early next year, following the farm-in agreement between Tullow Oil and Karoon Energy for Block Z-38 in the Tumbes Basin. Finally, one of the most promising initiatives has been the granting of 18 licenses in offshore Argentina licensing round. Several major companies actively participated in the tender, notably including Equinor, ExxonMobil, Total, Shell and Eni. The deep to ultra-deepwater blocks in the Argentina Basin are totally unexplored, and initial geological and geophysical studies will help better delineate the potential of the newly-awarded areas.

Although conventional exploration in Latin America is only slowly recovering from the 2016 low, the busy tendering activity and the response of the oil industry should bode well for future operations.

Clients can see further expert coverage and analysis on activity in Latin America with the Global Exploration and Production Service.