With US crude oil production having reached new record highs, close to 13 million b/d, according to the Energy Information Administration (EIA), the big question is the direction of future flows from the country, with some major importers starting to express their appetite for more US barrels. The country's production is estimated to average around 13.3 million b/d this year, which would allow the US to further strengthen its position among major crude oil exporters.

According to IHS Markit Commodities at Sea, which has been providing live data on US crude oil shipments with accuracy above 98% against EIA's official data since early 2017, the country's exports from PADD 3 (US Gulf Coast) has surpassed three million b/d. 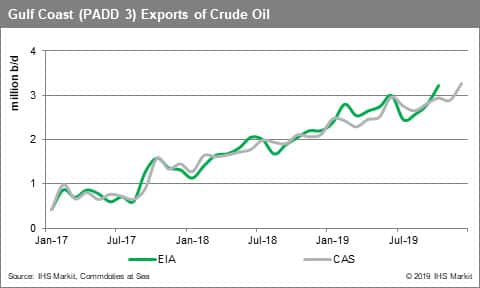 Meanwhile, EIA has raised its 2020 forecasts for West Texas Intermediate (WTI) crude oil prices to USD 59.25 a barrel. The sentiment across the global oil market has improved lately, with oil futures moving higher, driven by expectations that US relationships with other countries will improve. The US Senate has approved the US-Mexico-Canada trade agreement, while a trade deal was signed last week between Washington and Beijing, providing optimism that global energy demand growth could be much healthier than earlier anticipated. 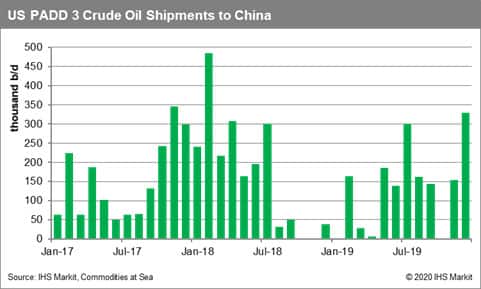 There seems to have been a revival in the US crude oil trade flows to China since late Q2 2019, as shown by IHS Markit Commodities at Sea data, with last month's shipments having surpassed 310,000 b/d for the first time since February 2018. Loadings in January have been moving lower so far, closer to 200,000 b/d, but the activity is believed to be affected by the approaching Chinese New Year as well. China is expected to further increase its purchases of US crude oil after the Phase 1 deal Washington and Beijing signed. With China's oil imports at a new record high, a healthier trade relation with the US would only benefit the country providing access to one of the world's biggest crude oil exporters.