There is no doubt South Korea will struggle if oil flows through the Strait of Hormuz face any future disruption, even if the country diversifies away from traditional crude oil suppliers towards more US crude oil barrels. But data by IHS Markit Commodities at Sea suggests that South Korea's plan to reduce its reliance on crude oil carried through the Strait of Hormuz has taken place quicker than expected. Back in 2017, producers across the Middle East supplied around 74% of crude oil flows to South Korea, with their share having dropped to 68% in 2018 and 64% last year. The decline is only marginally related to the country having avoided any Iranian barrels after the sanctions imposed by the US, with around 250,000 b/d imported back in 2017. 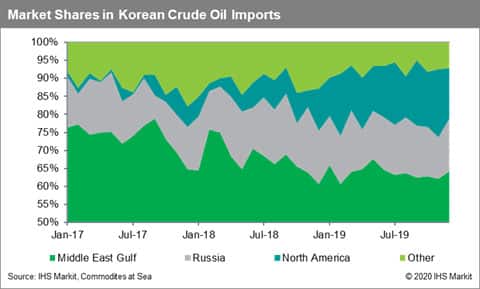 Meanwhile, South Korea's won, together with other Asian currencies has felt severe pressure earlier this year, mostly due to the geopolitical tensions in the Middle East which translated into concern around future oil prices. The country's heavy reliance on oil imports from the Middle East caused the won to tumble just after Iran attacked the US bases in Iraq. There's high risk around the currency's performance if oil prices increase.

South Korea emerged as the region's major importer of US crude oil barrels in 2019, a trend expected to last in 2020. The relationship started in an effort to replace Iranian flows, once the US decided not to renew the sanction waivers. South Korea has managed to diversify away from the Middle East Gulf, but there is a long path ahead. Lighter and sweeter US crude grades are quite popular in South Korea. However, the rally in the international crude oil tanker freight market could act as a threat for the further development of the route, if the US-Asia arbitrage becomes uneconomical. This was primarily driven by the sharp spike in VLCC freight rates, after the US imposed sanctions on COSCO tankers in late September. 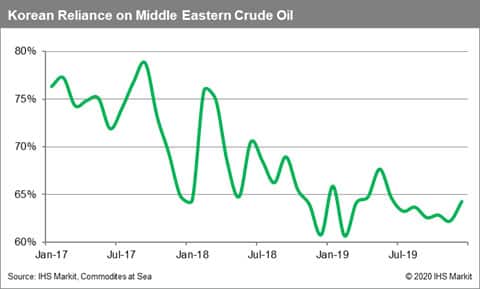 Meanwhile, South Korea has refused to send any troops to the Strait of Hormuz, even if its exposure to the region remains quite high. The US has been requesting South Korea to contribute by sending troops to support the US-led coalition against Iran, but Seoul is in a dilemma as it avoids damaging its trade relations with Tehran.