Crude Oil Trade: Libyan production and exports back to normal?

Good news from Libya, as production has gradually restarted at El Sharara. This is the country's largest oilfield, south of Zawiya port. Capacity is estimated at 340,000 b/d, but production typically stands marginally below 300,000 b/d. The field was shut since late July, after unknown gunmen blocked a pipeline. This has affected around a quarter of Libya's oil output, having prompted NOC to declare force majeure on loadings of the crude grade.

Just before the shutdown, production ranged between 1.2 to 1.3 million b/d, the highest reached during the last six years, after a rather challenging recovery observed since the beginning of 2019. July levels are estimated to have dropped to around 1.05 million b/d of crude oil, the lowest since February.

Exports have been surpassing one million b/d since June, with a record high achieved in July, as total volumes approached 1.2 million b/d. However, liftings are expected to feel the impact and fall below these levels in August. There is no doubt that the country still has a long path to return to pre-civil war production levels of 1.6 million b/d. The field closures in July still highlight the high risk in Libya's oil industry.

In terms of destinations, as data by IHS Markit Commodities at Sea shows, Italy and the rest of Europe have been absorbing the most, with ENI being quite active in supplying energy, including gas, to the country and recently discussing renewables projects. Flows to China have remained close to 130,000 b/d between February and June, before doubling in July, having reached 265,000 b/d. It will be interesting to see if flows to the Far Eastern country will further strengthen in the near future, assuming there are no further disruptions domestically. 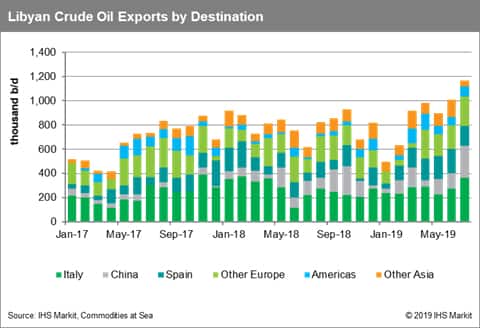