Crude oil shipments to Asia down further in September

OPEC and non-OPEC producers around the world are planning how to respond to a potential second wave of the COVID-19 pandemic that could shake global oil demand yet again in Q4 2020. All eyes are now on China and other major importers of crude oil. China may be sending confusing a message though, with imports having remained strong in Q3 so far, while high congestion has been observed close to its major crude oil ports. But activity so far in September suggests that the world's biggest importer of crude oil has been absorbing much less than a month ago. Barrels discharged in the last two weeks stand below eight million b/d, at levels similar to what China imported in March and April.

*Including storage facilities and volumes re-exported

Meanwhile, what has been reported so far by IHS Markit Commodities at Sea for other major importers across Asia does not leave much hope. Demand and imports seem to still be under severe pressure. Inventories built by domestic refineries are considered one of the parameters defining the current fragility in oil prices. Ports in the Shandong region, where several independent refineries are located, still face massive delays due to congestion. Volumes near the port still remain close to historic record highs. At least 87 ships carrying more than 100 million barrels of crude oil have remained in the area for seven up to 21 days.

Chinese refineries have rushed to take advantage of relatively cheap prices in Q2 2020 but are now facing difficulties in absorbing these barrels and find buyers for refined products locally produced. This translates into significantly fewer fresh deals for crude oil, with shipments to China continuing to decline. According to IHS Markit Commodities at Sea, crude oil shipments to China dropped to 7.6 million b/d so far in the first half of September, compared to 7.9 million b/d in August and 8.7 million b/d in July. Cargoes loaded in April and May 2020 exceeded 12.4 million b/d. It's interesting to report that flows from West Africa to China seem to be strengthening this month, for the first time since June. Meanwhile, less volumes have been shipped from storage facilities in South East Asia, while the US has started exporting more crude oil to China, after a break last month.

Crude oil shipments to China by origin in million b/d 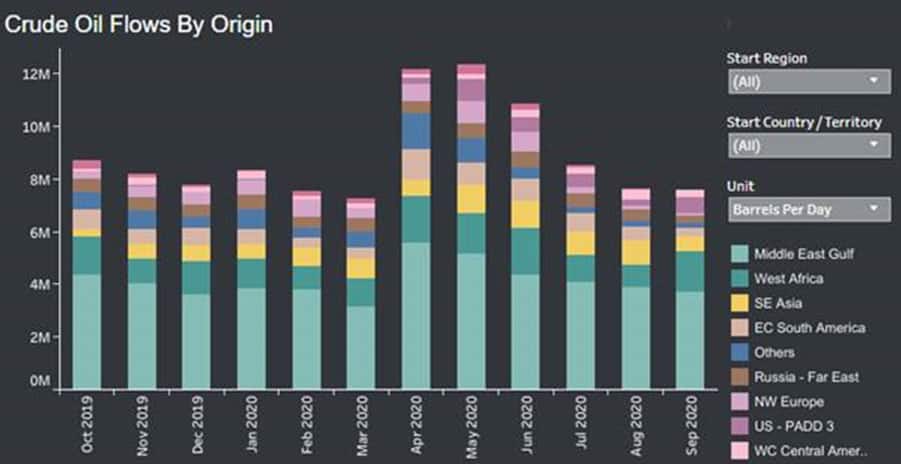 Overall, oil imports to Asia have extended losses and could report the lowest figure this year, with volumes down between eight and 10% so far this month since August. Volumes have been declining since July, when they reached 24.5 million b/d.

Meanwhile, India is the next big question for the market. India's state-owned refineries focus more on domestic demand with consumption finally recovering, but still at a rather slow pace. But the country's exporting refineries controlled by the private sector face a lack of demand, with more pressure for the country's exports of refined products on the horizon.