The global market for conventional crop protection products (excluding sales of herbicide tolerant and insect resistant seed, as well as non-crop agrochemicals) is estimated to have increased by 4.7% in 2021 to reach $65,206 million. A key influence on the global crop protection market in 2021 has been the economic recovery following the outbreak of coronavirus which was first identified during an outbreak of pneumonia in Wuhan City, Hubei Province, China in December 2019.

Although many industries were significantly impacted by the pandemic, agricultural economies have been largely sheltered from the worst impacts given the essential nature of food production. Agricultural input manufacturing and supply have largely been excluded from lockdown restrictions. However, some impacts to our industry have included reduced availability of migrant farm labour, issues surrounding delays of shipments in ports, availability of raw materials boosting product prices, reduced demand for biofuels and fibrous crops such as cotton, and there have also been some significant currency movements due to the influence on the wider economy.

The crop protection industry in 2021 is led by the two largest R&D companies, Bayer and Syngenta, each with sales in excess of $10 billion. The next level of the market, companies with sales of between $10 billion and $5 billion, consists of BASF, Corteva Agriscience, UPL and FMC. The third tier, with sales between $5 billion and $1 billion is dominated by the leading generic manufacturing companies with the exception to Sumitomo Chemical who invests significant value into a strong research and development pipeline.

M&A activity of the last couple of years has had a significant impact on the leading companies active in the agrochemical industry. The most notable moves include Bayer which has overtaken Syngenta as the leading company in the industry and UPL jumping to 5th position following the acquisition of Arysta Lifescience. In 2021, the combined sales of the leading players in the crop protection industry achieved double digit growth, boosted by strong growth in Latin America during the twelve-month period ending 31st of December 2021. Other major influences on company sales were pricing increased and strong volumes which were somewhat offset by currency headwinds. 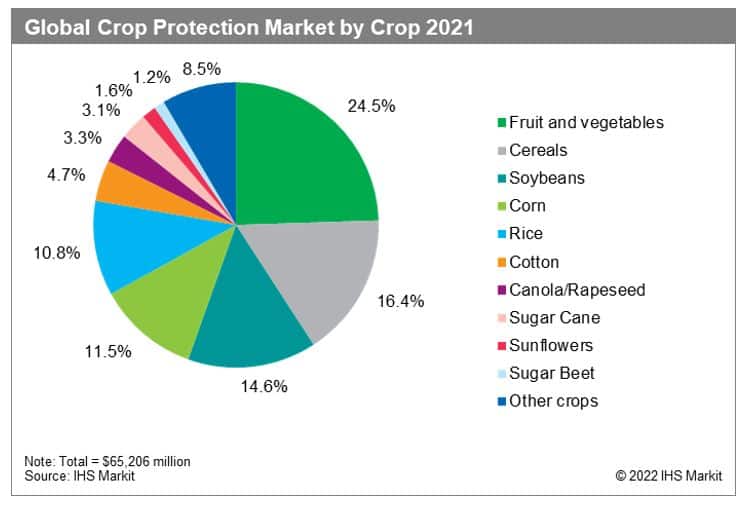 The conglomerate Fruit and Vegetable segment has historically been the most significant global crop sector, and this continued in 2021 with the market equating to around a quarter. Of this segment, vine (table and wine grapes), pome fruit and potatoes are the most significant crops; for these crops, fungicide sales are of greatest significance. Looking to the major grains, the global situation for cereals, corn and rice was positive in 2021 with some exceptions being dryness in Brazil during 2020/21 limiting prospects for maize as well as wheat in Russia where unfavourable conditions were also experienced.

In oilseeds, the situation was a mixed bag with soybeans being essentially flat with a decline in Latin America in 2020/21 being offset by growth elsewhere, while canola/rapeseed and sunflower experienced strong growth. These two crops were boosted by strong areas, promoting pesticide demand. However, yields of canola were poor, with reduced output in Canada and the USA as a result of dry conditions impacting global production. The cotton sector experienced a slight rebound following weakness in 2020 when the pandemic limited demand for textiles. 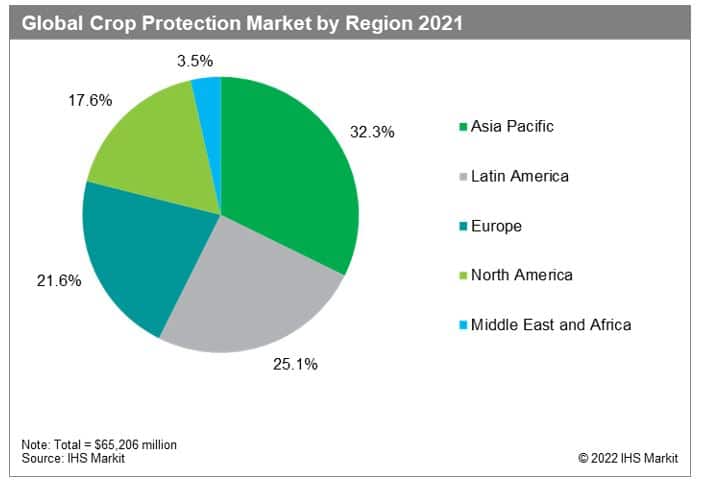 Overall, the Asia Pacific crop protection market is estimated to have grown by around 8 % to approximately $21 billion during the year boosted by growth in the major markets of China, India, Japan and Australia where favourable conditions boosted crop prospects. In recent years, the European crop protection market has been in a trend of decline with the region impacted by one of the strictest regulatory regimes and a number of molecules being banned/phased out, as well as unfavourable weather events.

In 2021, however, the region bucked this general trend, with particularly strong growth being achieved - regional total increased by over 7% to approximately $14 billion. Aside from expanded areas of key crops, the strength of the Euro boosted dollar term growth. Drought in the Pacific Northwest was offset by more favourable conditions elsewhere resulting in growth in the North American crop protection market. In contrast to the other regional markets, during 2021 we expect Latin America to show a notable decline, falling by around 3.0% to $16,377 million with the 2020/21 season impacted by dry conditions and continued currency headwinds, particularly so for Brazil.

Despite the decline experienced in 2020/21, Brazil remains the leading crop protection market, followed by the USA, then the major Asia Pacific nations of China, India and Japan. Strong growth in India has, however, resulted in the country overtaking Japan as the 4th largest market. The next biggest markets are those of Canada and Argentina then a block featuring the major European players of Russia, France and Germany. The return to favourable conditions in Australia has resulted in the country overtaking Italy as the 11th largest country market.