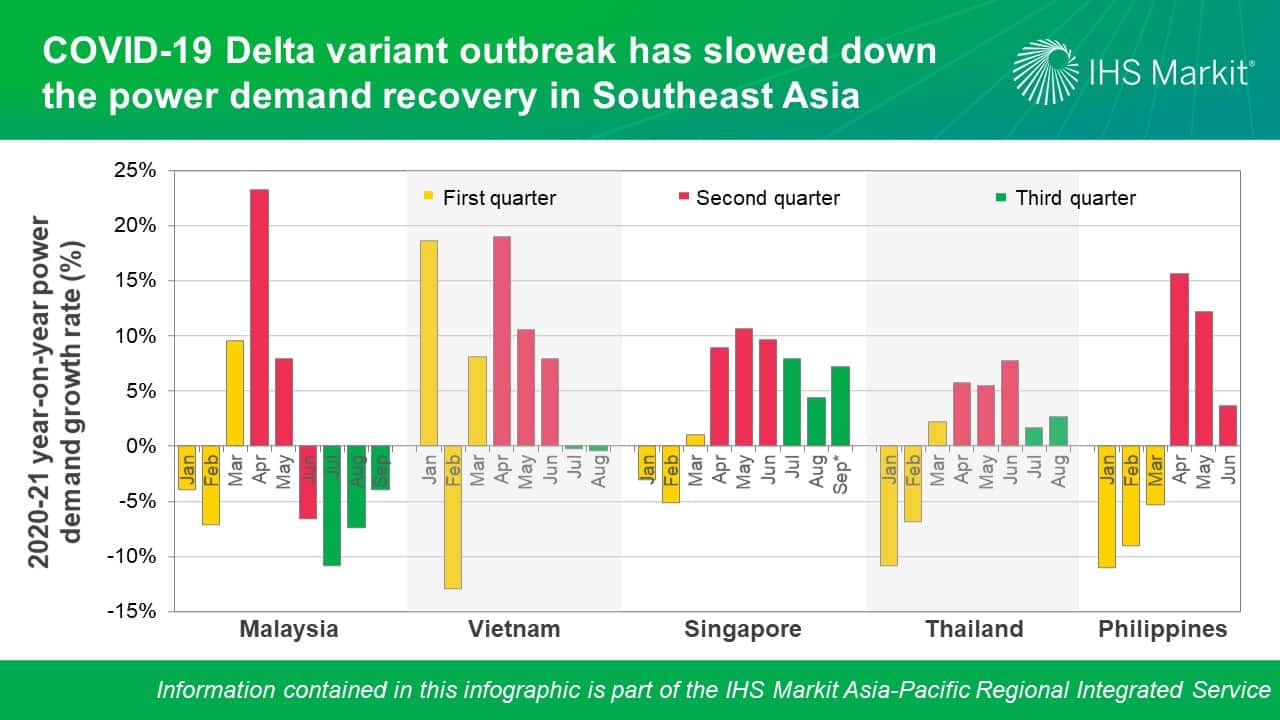 Most of the SEA countries started to impose regulations to battle COVID-19 since the end of March 2020. The power demand or market were not largely affected in January and February of 2020, considered as pre-COVID-19 comparative months. Most markets featured a y/y demand drop in January and February 2021, indicating that the power demand had yet to recover to pre-COVID-19 levels but increased significantly in March. In the first quarter, Vietnam was the only nation with a positive y/y power demand (average 4.6%), while the Philippines and Thailand witnessed a substantial decline in y/y power demand, with an average of 8.5% and 5.2%, respectively.

The power demand has risen in SEA region during the second quarter, with positive y/y power demand growth ranging from 3.7% to 19.1%. It revealed that the market was beginning to recover from COVID-19, suggesting a rebound in power market demand. Vietnam had the highest y/y power demand growth rate, with an average of 12.5%, which is followed by the Philippines (average 10.5%), Singapore (average 9.8%), Malaysia (average 8.2%), and lastly, Thailand (average 6.3%).

By the third quarter, the highly transmittable Delta variant of COVID-19 had struck the SEA region and stalled the power market recovery. The following section presents the details of each market's power market scenario:

The scenario in Malaysia was considerably complicated, involving the coronavirus, the economy, and politics. The unravelling COVID-19 situation can be partly explained by political instability. Slow vaccination has forced the government to rely on repeated tightening restrictions to curb the spread of COVID-19, causing major disruptions in business operations. After the new Prime Minister was appointed in August and a rise in vaccination rates, the power market has been slowly rebounding, albeit it remained in negative growth.

Among all SEA countries, Vietnam is one of the highest industrialized with a large unvaccinated population. With the surge of COVID cases, the country imposed strict stay-at-home orders and demanded more factories to shut down. The economy was strangled by lockdowns, triggering a sharp drop to negative y/y growth in power demand for July and August.

Meanwhile, the impacts of the Delta variant of COVID-19 have been minimal in Singapore. Even though the Phase 2 measures were imposed in the third quarter, the power market continued to grow at a rate ranging from 4.4% to 8%. The country has high vaccination rates and has started to impose the booster. The government proclaimed to adopt a "living with COVID-19" approach soon, which would include ease of more COVID-19 restrictions.

Thailand has a similar trend as Singapore, which is still performing a y/y power demand growth amid the Delta variant outbreak. This is mostly owing to Thailand's severe economic recession in 2020. As a result, there has been some recovery momentum in power market, with an average y/y power demand increment of 2.2% for July and August. September power market data was still unavailable, but they are estimated to remain at the same level as the third quarter.

The SEA's robust power demand recovery from COVID-19 is losing momentum as a highly infectious Delta variant surge driving more tightened restrictions and factories shut down. However, the power market is expected to rebound if community immunity is achieved and countries find their way to live with COVID-19.

Although the power market recovery is fluctuating, the SEA region has never retreated in the climate change front, and the Association of Southeast Asian Nations (ASEAN) governments have continued to work on several measures to keep their emission targets. In the third quarter of 2021, Indonesia, Malaysia, and Myanmar submitted their updated nationally determined contributions (NDCs).

On 22 July, Indonesia submitted an updated NDC and kept the same emission reduction target as the last one, 29% of unconditional reduction and up to 41% conditional reduction of the business-as-usual (BAU) scenario by 2030. Although the updated NDC did not commit to a net-zero target, the Long-Term Strategy (LTS) documents ― "Vision Indonesia 2045" and the "Long-Term Strategy on Low Carbon and Climate Resilient Development 2050" offered long-term emission scenarios toward net-zero emission in 2060 or sooner in Indonesia. Additionally, support was received from the state-owned electricity utility PLN, which pledged to stop developing coal-fired power plants after 2023 and that could reduce greenhouse gas (GHG) emissions by 7‒11%.

Myanmar released its new NDC with details about the GHG emission target by 25 August. The Burmese government sets a conditional GHG emission reduction target of 144 million metric tons of carbon dioxide equivalent (MMtCO2e) in the energy sector by 2030, against the BAU scenario of 297 MMtCO2e. In parallel, the unconditional target is looking to decrease 105.25 MMtCO2e by 2030 compared with the BAU scenario. This will be achieved by increasing the share of solar and wind energy to 53.5% (from 2,000 MW to 3,070 MW) and improving energy efficiency by 20% (resulting in 15 MMtCO2e decreases in emission by 2030).