Most major South China ports are now subject to some form of limitation over all types of coal imports.

The controls vary in form and degree, with some imposing total bans, others banning various user groups, and others tightening their customs clearance procedures.

There is yet to be any indication of how long these restrictions will remain in place.

Beijing appears to have been spurred by a desire to quell the surge in import volumes seen in the first quarter.

On Friday, ports in Guangxi, Zhejiang, and Guangdong started to restrict imports, following similar action at two terminals in Fujian province in the previous week.

There were also new restrictions in Fujian, with Xiamen port and Quanzhou Port Said to be suspending the berthing of all vessels carrying imported coal from 13 April onwards.

Power generators in the region, including SDIC and Guodian, were also heard to have encountered difficulties berthing vessels carrying imports.

"We awarded a tender for Indonesian material last week," a buyer at a Fujian based power plant said. "We and our peer end users in the region will appeal, with the aim of at least getting permission for the performance of existing contracts."

Fangcheng port and Qinzhou port in Guangxi province will not allow the berthing of vessels carrying imported coal from trading houses and will determine the allowance of shipments for end-users on a case-by-case basis.

In Guangxi province, it is understood that the customs clearance process is expected to take longer.

"The existing inventory at Fangcheng port is very healthy. Traders like us are now forced to find end users to take our arriving cargoes instead of building higher port stocks and doing stock and sale business," said a local trader in Fangcheng.

Zhoushan port and Yuhuan port in Zhejiang province has also imposed restrictions on imported coal, only allowing clearance of shipments for those who have already declared a discharging port.

Only local end users at Zhuhai Gaolan port and Zhanjiang port in Guangdong province will be allowed to take imports from this week onwards, it is understood.

Major imports terminal Guangzhou Xinsha was said to have held a meeting this afternoon, where the port authority informed stock and sale traders that stricter imports inspections and port clearance processes would be in place, however coal imports would not be banned.

Market participants told IHS Markit that the restrictions are casting a shadow over the outlook for imports into the country, but has been a boon domestically.

"The imports restriction policy is a relief to domestic stock and sale traders at North China ports, who are sitting on high inventory levels and have suffered a slide in prices in the past two months," one Chinese trader said.

Beijing is looking for imports to fall or be stable to 2017 levels, many market players believe, although no official policy has been announced.

The timing of the restrictions may also be to support the falling domestic price, which now sits within the Government target range of RMB500-570/t, down from February's high of around RMB750/t.

It is likely that the government would want to avoid this level of increase prevailing throughout the rest of the year, and taking action in the weakest consumption season is opportune. 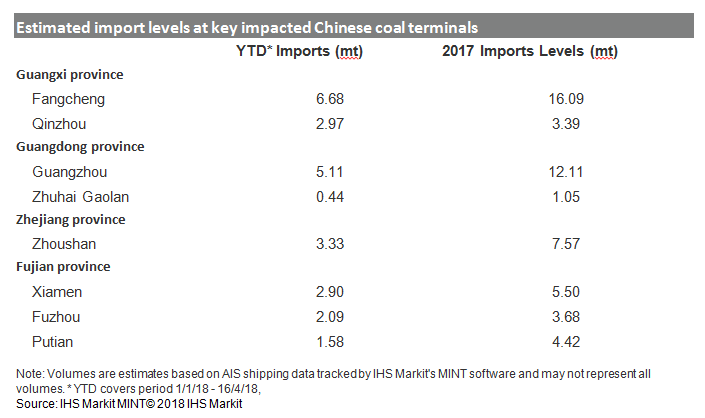 Learn more about our global coal news and analysis.

Michael Yu is an Associate Director for our Coal team and is deeply involved in setting IHS Markit's major coal markers in Asia.
Posted 17 April, 2018