Chinese domestic LNG price spikes again: How is it different from the 2017/18 winter?

During December 2020 and January 2021, Chinese domestic wholesale LNG prices shot up to levels unseen since the winter of 2017/18, then owing to an aggressive coal-to-gas switching campaign that set off a nationwide gas shortage. Just a few months ago, this would've been hard to imagine given the below $2/MMBtu spot LNG prices and the domestic wholesale LNG prices falling below the regulated citygate gas price levels in some regions—something that had never happened before.

Yet, deregulated domestic LNG prices managed to shoot up dramatically. In the second week of December 2020, a cold spell sent temperatures plummeting across China. With limited volumes of piped gas for emergency supply, citygas companies rushed to the liquid market. By the second week of January 2021, the average wholesale LNG prices in northern China, where demand is most seasonal, reached nearly 7,500 yuan per metric ton, or $22/MMBtu. Despite the fact that wholesale LNG prices spiked as around the same time as the surge in North Asian spot prices, the events were largely unrelated as Chinese importers had already cancelled purchase tenders at the high spot prices.

While the price spike this winter resembles the 2017/18 shortage, China's gas market has evolved since. In 2017/18, even the highest priority gas users like homes, schools, and hospitals had supply curtailed. Supply for these end-users has been much more stable in the 2020/21 winter season. 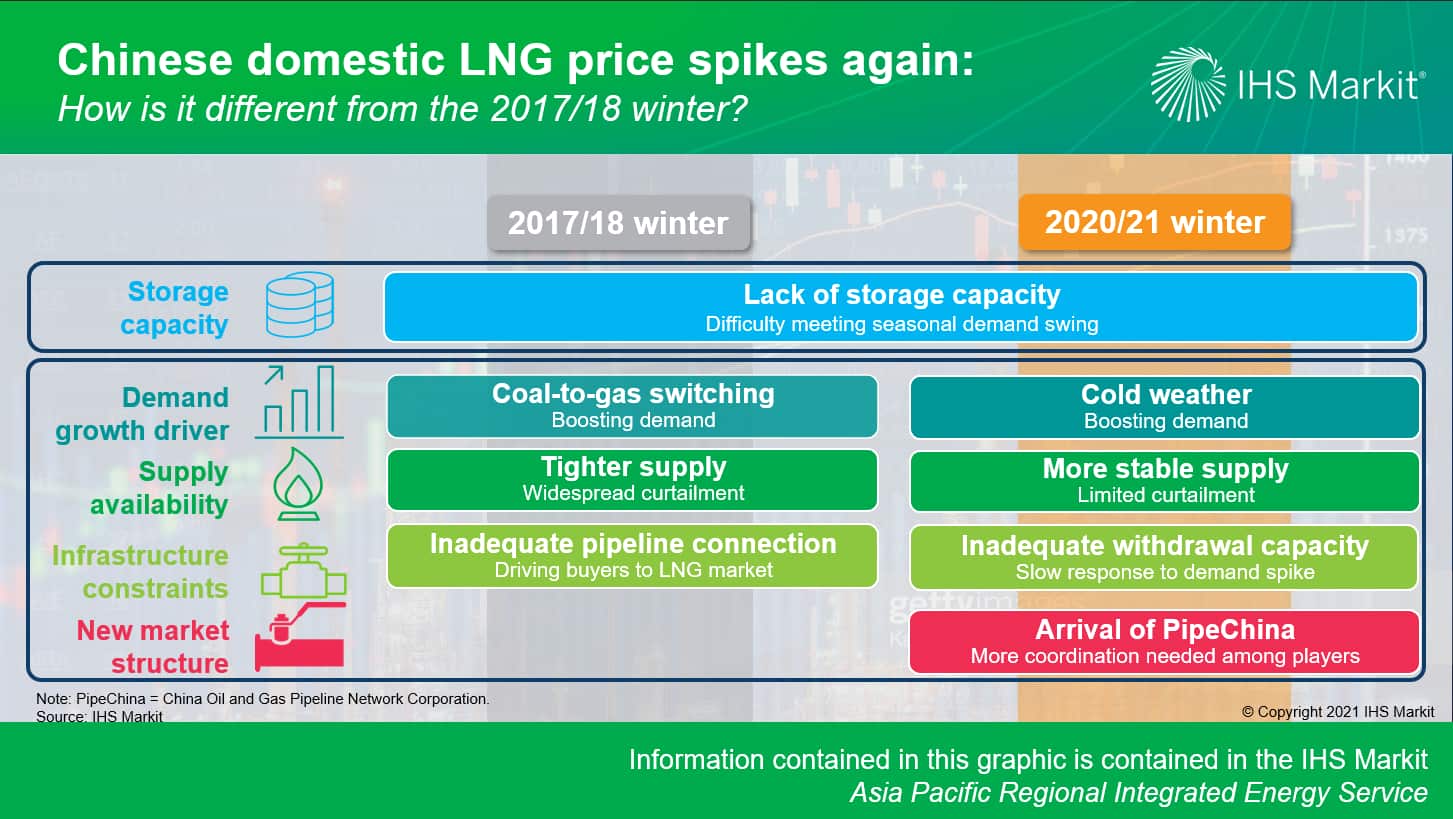 The lack of storage is a well-known issue in China's gas market. However, the rush purchasing by citygas suppliers shines the spotlight particularly on the need not only to develop new storage capacity but also to improve withdrawal capacity and emergency supply capacity. When temperatures suddenly dropped, heating demand surged almost instantaneously, but gas did not come out of the pipeline system or large storage facilities fast enough.

In addition, PipeChina's taking over the dispatching responsibility for the first time also played a role in changing the market landscape. With the 2020/21 winter being PipeChina's first peak supply season, gas suppliers and downstream players had to adapt to changed roles and responsibilities in the new status quo. As can be expected in a first year, cooperation among players was not streamlined, resulting in some degree of system-wide inefficiency contributing to periods of supply scarcity.

What we can glean from the price spike from the 2020/21 winter is that supply resiliency challenges are not a thing of the past. Despite efforts to increase domestic gas supply, peak shaving capabilities—especially emergency storage response—will still need to be addressed. Midstream unbundling and the creation of PipeChina marks a step forward for China's gas market reforms, yet it will also take time for the market to adjust.

Learn more about our coverage of the Greater China energy market through our Asia Pacific Regional Integrated Service.

RT @SPGCI: Conversations at COP27 prove that renewables (solar, wind, +) have made significant progress in the energy mix. We will find bal…