In late October 2021, the State Council of the People's Republic of China announced two separate documents on achieving carbon emission ambitions—the Opinion on Completely, Accurately, and Comprehensively Implementing New Development Concept and Achieving Carbon Peak and Carbon Neutrality (the Opinion) and the Action Plan for Carbon Peaking before 2030 (the Action Plan). The former, dated September 2021, addresses both the 2030carbon peak and 2060 carbon neutrality goal, while the latter, dated October 2021, focuses on the action plan to achieve carbon peak before 2030. 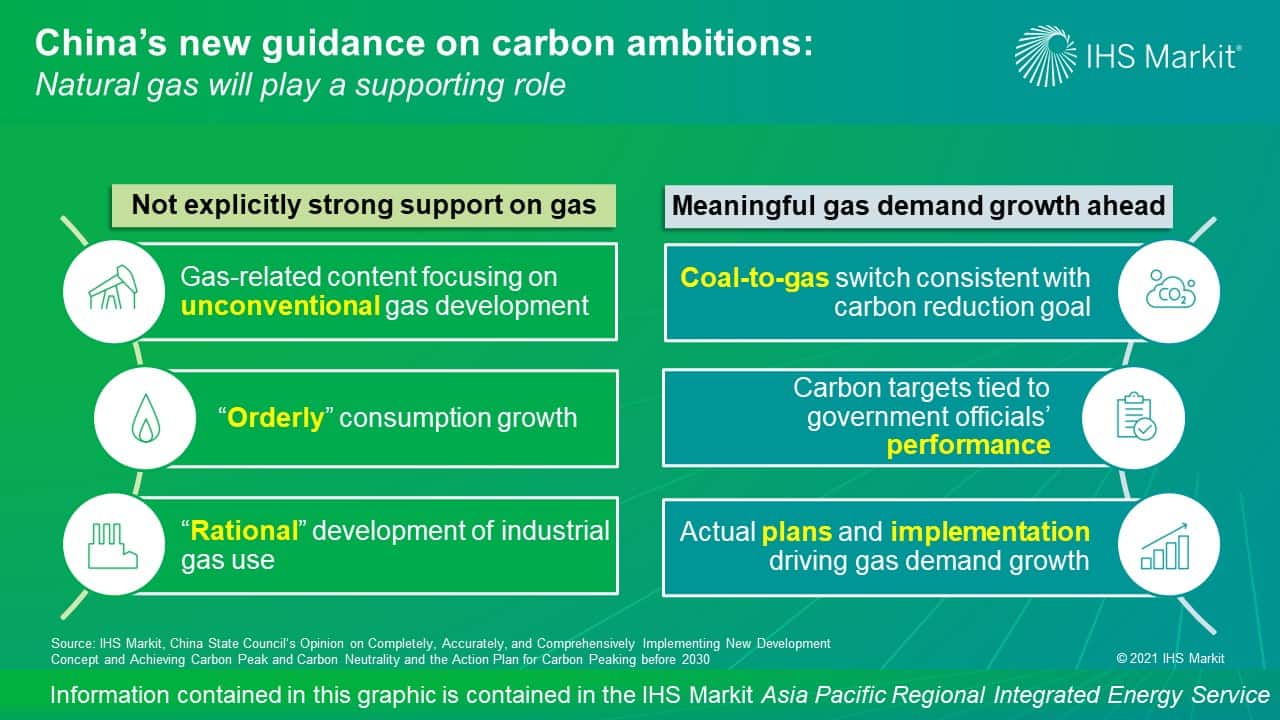 Together, these two documents reaffirm the Chinese central government's commitment on the carbon goals—carbon peak by 2030 and carbon neutrality by 2060. Among the few new quantitative targets is an 80% share of nonfossil fuel in the primary energy mix by 2060, indicating the use of carbon sinks to offset carbon emissions from the remaining 20%. The 14th Five-Year Plan (FYP) period ending in 2025 is designated as the time to lay the foundation for achieving carbon ambitions, while 2030 and 2060 represent the milestones to realize the carbon peak and carbon neutrality goals, respectively.

Based on the amount of discussion on natural gas in the Opinion and the Action Plan, natural gas will play a supporting, not central, role in achieving China's carbon ambitions. Of the almost 14,000 Chinese words in the Action Plan, only one paragraph of 195 words is dedicated to the oil and gas markets. Gas-related content in the Opinion is even less. Specific guidance on natural gas centers around domestic resources, particularly accelerating unconventional gas development, indicating the continued emphasis on maintaining supply security and controlling import dependency. On the demand side, the Action Plan calls an "orderly" growth of gas consumption and a "rational" development of industrial gas use.

Despite the lack of explicit support in the Opinion and the Action Plan, Chinese gas demand growth will still be meaningful. The two documents serve as high-level general guidance, leaving different government agencies and levels to create subsequent development plans for specific industries. Indeed, the Opinion specifically calls for a responsibility system tying carbon peak and neutrality targets to the performance of leading Communist Party members, local Communist Party committees, and local governments at all levels. Natural gas has much lower carbon emissions and higher energy density and efficiency than coal, making it a good option to displace coal to help China reduce carbon emissions.

In particular, "rationally" guiding industrial gas use as stated in the Action Plan is subjective. Local governments' actual plans and implementation will vary based on local supply availability and affordability. Regions that have access to growing gas supply and high affordability with strong commitment to air pollution control and decarbonization will continue to drive gas demand growth. Coal-to-gas switch will also proceed in industries where energy costs are a relatively small part of total costs.