"Dual control" to reduce energy intensity and to limit total energy consumption is a key measure that the Chinese government implements to help meet its energy and climate goals. Despite a policy tool implemented five years ago, on 3 June and 12 August 2021, the National Development and Reform Commission (NDRC) issued the quarterly reviews of the target achievement for the first time, with progress alerts upon provinces. On 16 September 2021, the policymaker released "The Scheme to Refine Dual-Control of Energy Intensity and Total Energy Consumption" (the Scheme). Just days after that, some provinces with "progress alerts" started to employ power rationing and production curbs.

China's dual-control policy on energy consumption was first implemented in 2016 during the 13th FYP, but the energy intensity target has a longer history that dates to 2006 during the 11th FYP. Under the current dual-control mechanism, lowering energy intensity is given a much higher policy priority compared with controlling total absolute energy consumption.

China has been able to steadily bring down its energy intensity level in the past decade thanks to the continuous energy efficiency enhancement of the industrial sector as well as the expansion of the less energy-intensive services sector.

However, the COVID-19 outbreak has created a strong counterforce that has disrupted this declining trend. Exuberantly upbeat manufacturing activities and the yet-to-fully-recover services sector have combined to tilt China's energy intensity balance towards the heavier end, shoveling up the market's total power consumption to a decade-high growth of 17% in the first half of 2021. This has made reducing energy intensity particularly a challenging task for this year especially for many of the manufacturing-reliant provinces. 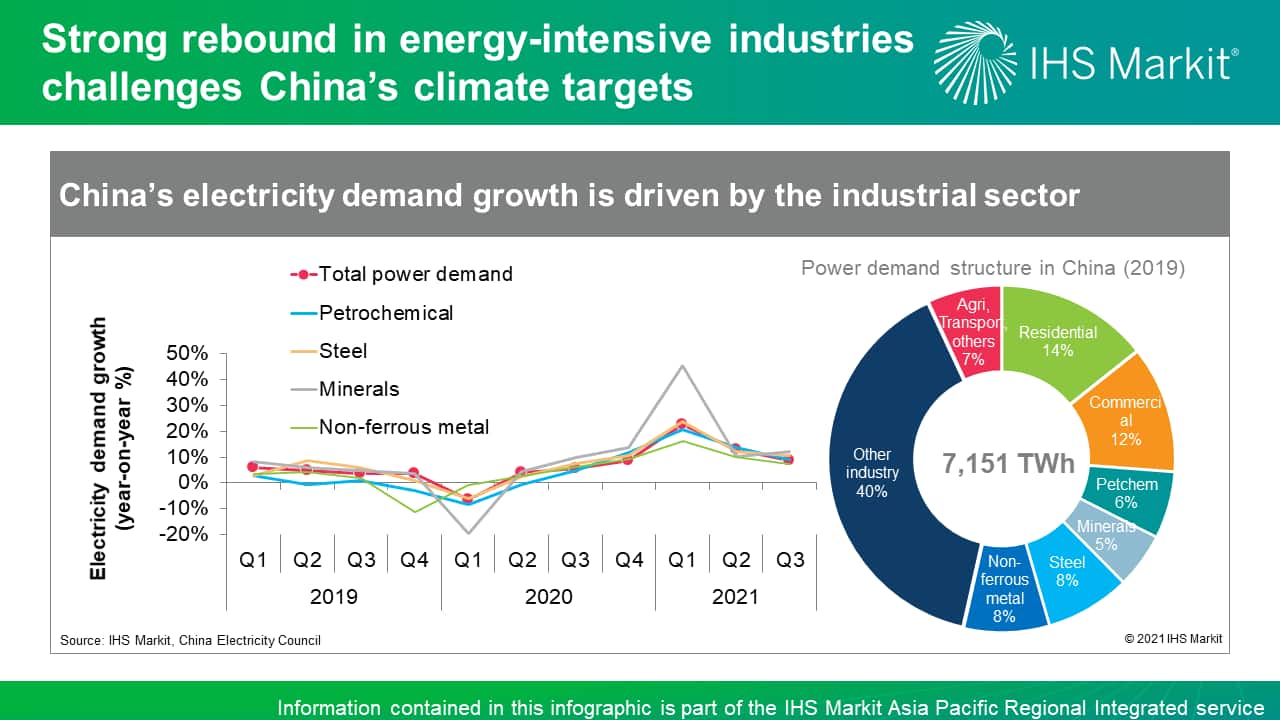 This challenge is met with China's ambitious carbon pledges that have turned energy consumption control into a highly prioritized nationwide campaign, essentially forming a strong "policy crunch" against underperforming provinces that has forced them to resort to power rationing to meet dual-control targets. This has coincided in time and contributed to the severity and scale of a recent wave of power outages sweeping across two-thirds of the region, of which a shortfall in coal supply is believed to be the chief cause.

However, IHS Markit expects that the recent round of dual-control-induced power rationing and production curbs will be relatively short-lived and is expected to be gradually lifted during the fourth quarter. The manufacturing sector is expected to cool off into next year thanks to the moderation of export demand, while the services sector will continue to rebound to reshuffle some of the energy use toward less energy-intensive ends. This will make it directionally easier for provinces to meet their dual-control targets next year, reducing their likelihood of having to resort to last-minute control measures.

Even if conditions render such actions necessary in the future, IHS Markit expects the rationing will happen over a more limited scale and time horizon. The governments will likely adopt a more forward-looking, proactive, and differentiated approach in managing their province's energy use profile.

Looking beyond just the recent scramble, IHS Markit expects the dual-control policy will be one of the primary long-term tools that the Chinese government will use to meet its energy and climate targets. It is no easy task for an economy as grand and complicated as China to regear itself from the traditional energy-intensive development pathway to a low-carbon and clean future, and the market's ambitious carbon pledges have simply made this process all the more urgent and necessary. Various forms of control measures are therefore needed to facilitate and accelerate the much-needed transition so that China could land on a lower-carbon emissions peak before it sets out to neutralize the emissions. In this context, the strong synergy between energy consumption and carbon emissions has enhanced the priority level of this dual-control policy. Moreover, at this stage, energy conservation policy is a more effective tool compared with direct carbon emissions reduction. The policy already has a history of more than 15 years in China, and the market has maintained a much more developed measurement, reporting, and verification system on energy intensity and energy consumption compared with that on carbon emissions.