China’s carbon neutral pledge: Setting the stage for another four decades of transformation

In a recent announcement to the United Nations, Chinese President Xi Jinping committed China to a carbon-neutral future, to be achieved by 2060. This is the first time that China has pledged a carbon emissions target in absolute terms and is a historic announcement that is bound to effect major changes to its energy sector, with global implications.

It will require China to execute a nationwide transformation over the next 40 years, one that is perhaps even more dramatic than over the past four decades. If done right, it would not just create a new energy system, but a new economy.

China is taking on the Herculean task of decarbonization when energy demand is still growing.

Unlike many other regions that committed to similar targets (such as Europe and Canada), China's per capita energy consumption remains relatively low—roughly 40% below that of Germany and 67% below that of the United States and is still growing. New investment in carbon-free energy will need to not only replace existing fossil resources but also meet incremental demand.

Reducing coal use and decarbonizing the transport sector will be vital to achieving the goal.

Power generation and industrial sectors' energy use are dominated by coal, accounting for 64% of China's current carbon emissions, with the transport sector, which is dominated by oil products, representing another 12% (see below). 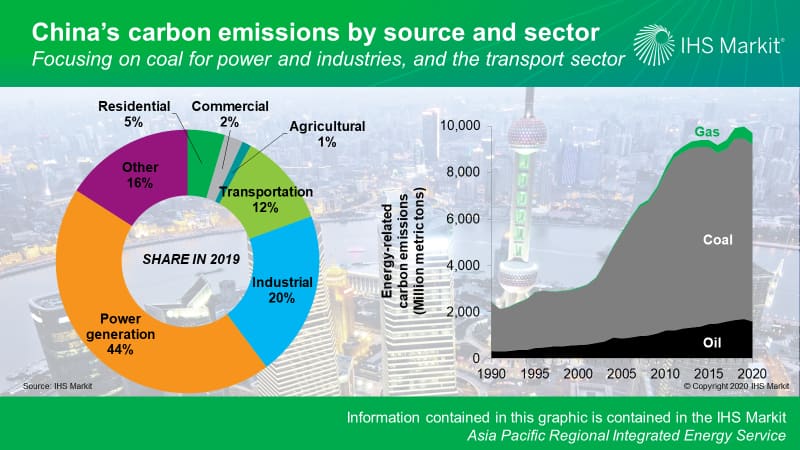 Renewable energy, electrification, carbon capture, and low-carbon hydrogen will be contributing factors to drastically reduce carbon emissions in key emitting sectors, and the pace of technological improvement must accelerate significantly so that they can scale up to meet the carbon neutral challenge. We provide detailed analysis on these key technologies in our Global Clean Energy Technology Service.

Interestingly, the age profile of the majority of China's coal-fired power fleet actually fits President Xi's timeline quite well. Most of China's existing coal plants were built before 2015 - about 1,000 GW (more than enough to power all of Europe today). Assuming a 30-year technical life, all of these plants will be retired before 2045.

How do we replace 1,000 GW of baseload coal-fired power supply with carbon neutral resources in a 20-year period, especially at a time when demand will likely still be growing? Can conventional hydro and nuclear power play a role? Or will renewables and energy storage technologies mature quickly enough that they can scale up to meet this demand challenge? We explore this in more depth in our Asia-Pacific Regional Integrated Energy Service. 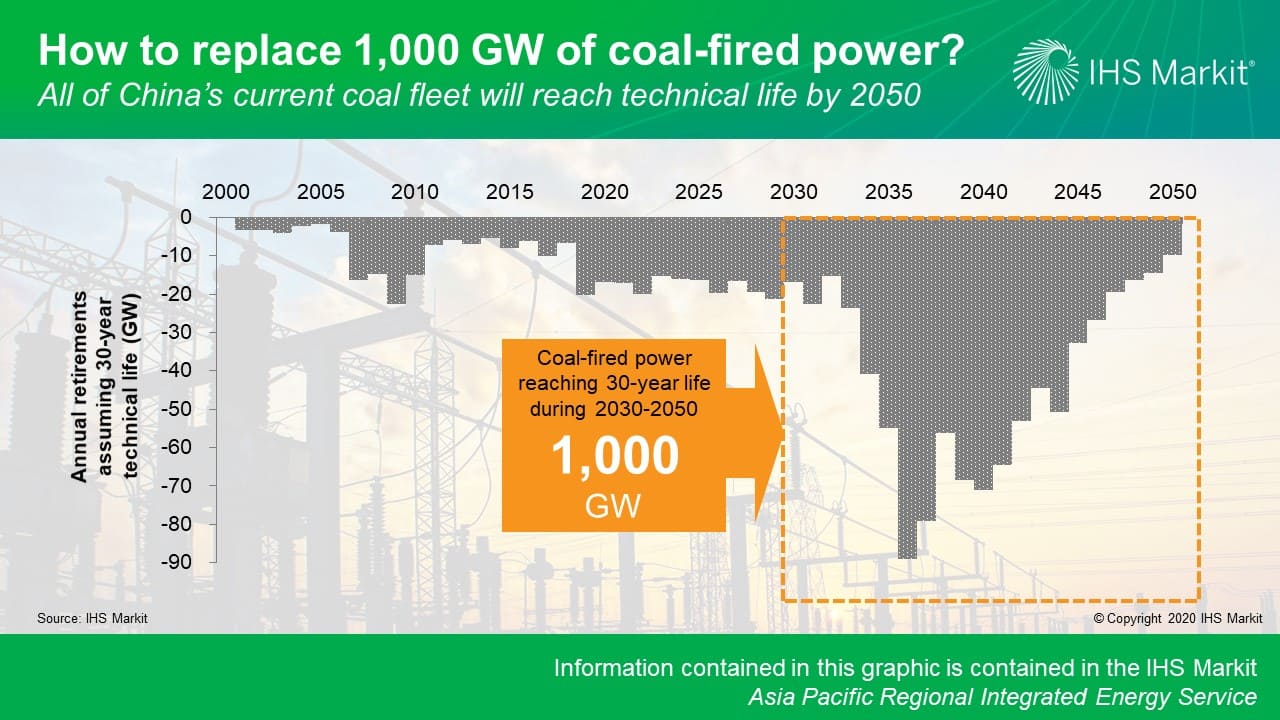 For the industrial sector that relies on coal to produce heat and steam in their production processes, the campaign to switch from coal to natural gas the past few years has already helped reduce coal consumption, but with carbon neutrality, even natural gas will have to be minimized. For processes that require gaseous or liquid forms of energy, then, biofuels, hydrogen and other renewable gases will be needed.

This is why many Chinese companies are actively pursuing hydrogen energy today.

And there's another important end use for hydrogen, and that is the transport sector. China is a leader in electric vehicles today, but hydrogen fuel cell technology is attracting more and more attention, especially when it comes to heavy duty transport needs. We have gathered a community in our Hydrogen and Renewable Gas Forum to further explore this.

Carbon removal as well as transaction mechanisms will be needed to address sectors that are the hardest to decarbonize. Carbon capture and storage and nature-based solutions such as emissions offset through forestry projects can still allow for some fossil fuel consumption in certain energy-consuming sectors that are extremely difficult to decarbonize.

The target will require accelerating technological advancements and radically creative policy formulation, presenting a colossal challenge to many companies but also immense opportunities. The IHS Markit Accelerated Carbon Capture and Storage scenario envisions China's energy-related carbon emissions dropping rapidly to just 72 million metric tons in 2050, very close to achieving the net carbon neutrality goal. There are many other pathways that can take China to a net zero emissions future, which we explore in depth in our Climate and Energy Scenarios Service, but whichever pathway, all this means an entirely transformed energy landscape, with players vying for a spot in a new economy - some may perish while others, including brand new ones, will flourish.

Another four decades of transformation?

Forty years ago, China's economy was 1/30 of its size today, and electricity consumption was 1/25 of today's level—met by just a few coal plants or hydro projects in each province; most households were still burning wood and coal briquettes for cooking and heating; roads were filled with bicycles, and passenger vehicles were rare sightings.

Over the past four decades, China went through such a thorough transformation that few back in 1980 would recognize it today. Perhaps it is with this spirit that China will look 40 years ahead and boldly chart out yet another transformed future.

Xizhou Zhou is a Vice President and Global Managing Director of power and renewables at IHS Markit.
Jenny Nguyen Yang is a Senior Director for Asian gas markets at IHS Markit.