Carbon capture and storage (CCS) in the Middle East – a future powerhouse of the hydrogen industry?

It has been established in the last decade by the 2016 Paris Agreement, and subsequent reports by the International Energy Association (IEA), that to limit global temperature increases to 2°C by 2060, 14% of cumulative emission reductions must be derived from CCS technologies.

CCS has been implemented since 1972 and, as of the end of 2021, approximately 40 million metric tonnes per annum (MMtpa) was captured across 29 operational CCS facilities, globally. This is an increase of 12 MMtpa from the end of 2015, when only 15 large-scale CCS projects were operational. The project pipeline capture capacity, that is all facilities at different stages of the development cycle, is around 150 MMtpa. This paints an optimistic picture, but this potential was originally projected in 2011 when capacity decreased year-on-year until 2017.

When viewed in context with the modelling provided by the IEA - which suggests that to limit the average global temperature increase to 2°C, approximately 4 billion metric tonnes per annum (Gtpa) of carbon dioxide (CO2) will need to be captured by 2040, followed by 6 Gtpa by 2040. At the current pace of CCS development, this target will not be reached from the pipeline of commercial CCS facilities. The capture capacity of facilities will need to increase 100-fold to meet environmental targets. Assuming a CCS facility has an average CO2 capture capacity of 1.5 MMtpa this would suggest roughly 2,500 facilities will need to be operational, globally, by 2040. 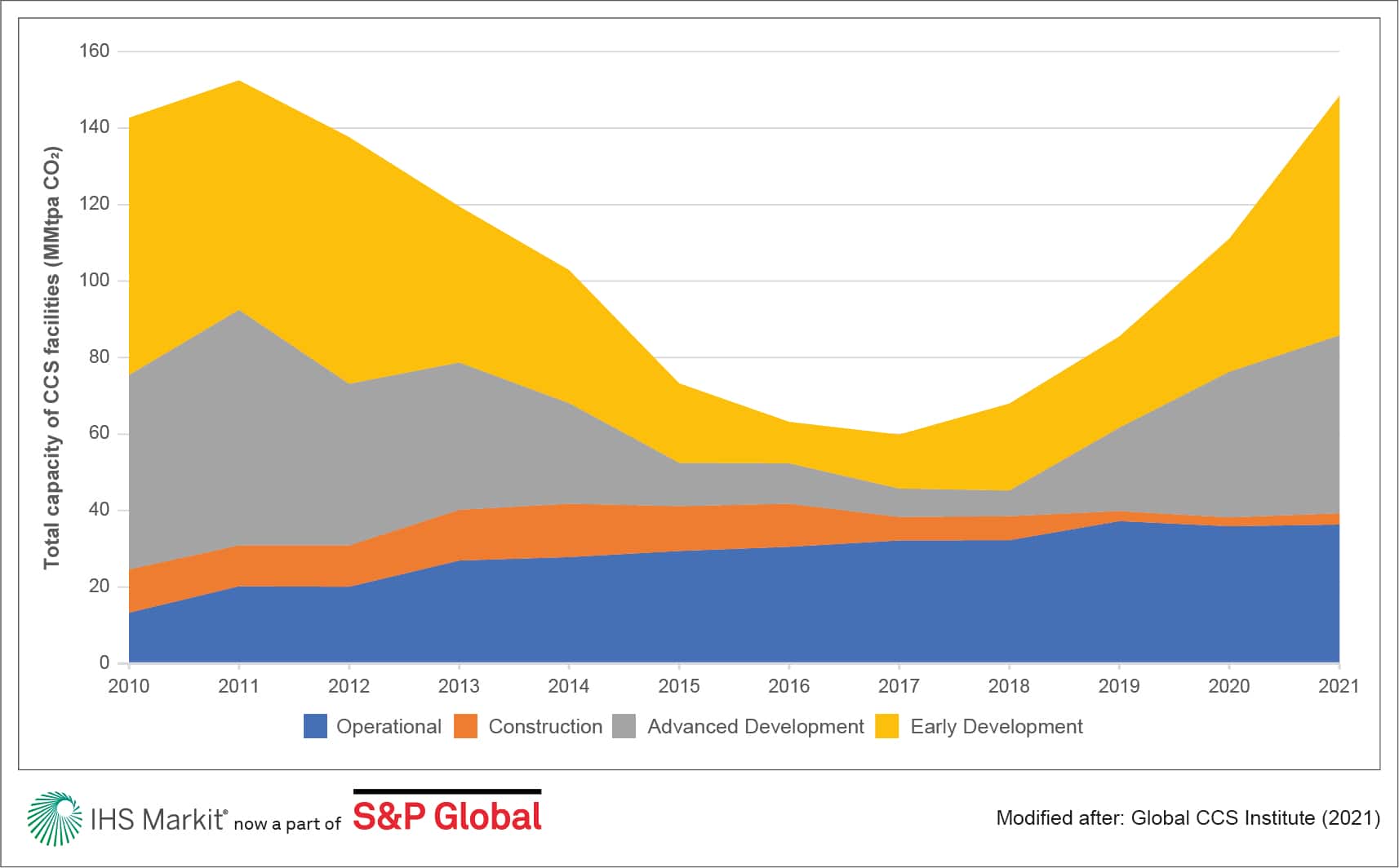 The objective of the Uthmaniyah CO2-EOR Demonstration Project was to assess the applicability to sequester CO­2 in a mature zone within an oil reservoir. The project became operational in July 2015 and involves the capture, compression, and dehydration of 0.8 MMtpa of CO2 from the Hawiyah Natural Gas Liquids (NGL) Recovery Plant. Once captured, the gas is then piped approximately 85 km to the Uthmaniyah sector of the Ghawar field (the largest oil field in the world) and injected into an oil reservoir at a rate of 40 million standard cubic feet per day (MMscf/d): sequestering the gas whilst maintaining pressure and enhancing oil recovery.

Interchangeably referred to as Abu Dhabi CCS, the Al Reyadah Project is located onshore in Mussafah and is the world's first commercial-scale CCS facility capturing 0.8 MMtpa of CO2 from the steel industry. Phase 1 became operational in 2016 following successful CO2-EOR pilots in both 2009 and 2012. The project captures, compresses and dehydrates up to 90% of CO2 from an Emirates Steel production facility at Musaffah and transports and injects CO2 through a 43 km buried pipeline for EOR at the onshore Rumaitha and Bab oil fields.

The Ras Laffan CCS Project, colloquially referred to as the Qatar LNG CCS or RasGas CO2 Injection Project, is thought to have become operational in 2005, however the finer details of the project are undisclosed. The project involves the capture of CO2 from the Ras Laffan Liquefied Natural Gas (LNG) facility. Unlike the efforts of Saudi Aramco and Abu Dhabi National Oil Company (ADNOC) to utilise the captured CO2 for EOR purposes, QatarEnergy opted to inject the gas into a dedicated geological storage site, understood to be the Arab Formation. Initial CO­2 injection rates into the subsurface were estimated to be 1.1 MMtpa with recent estimates suggesting an increase to 2.1 MMtpa. 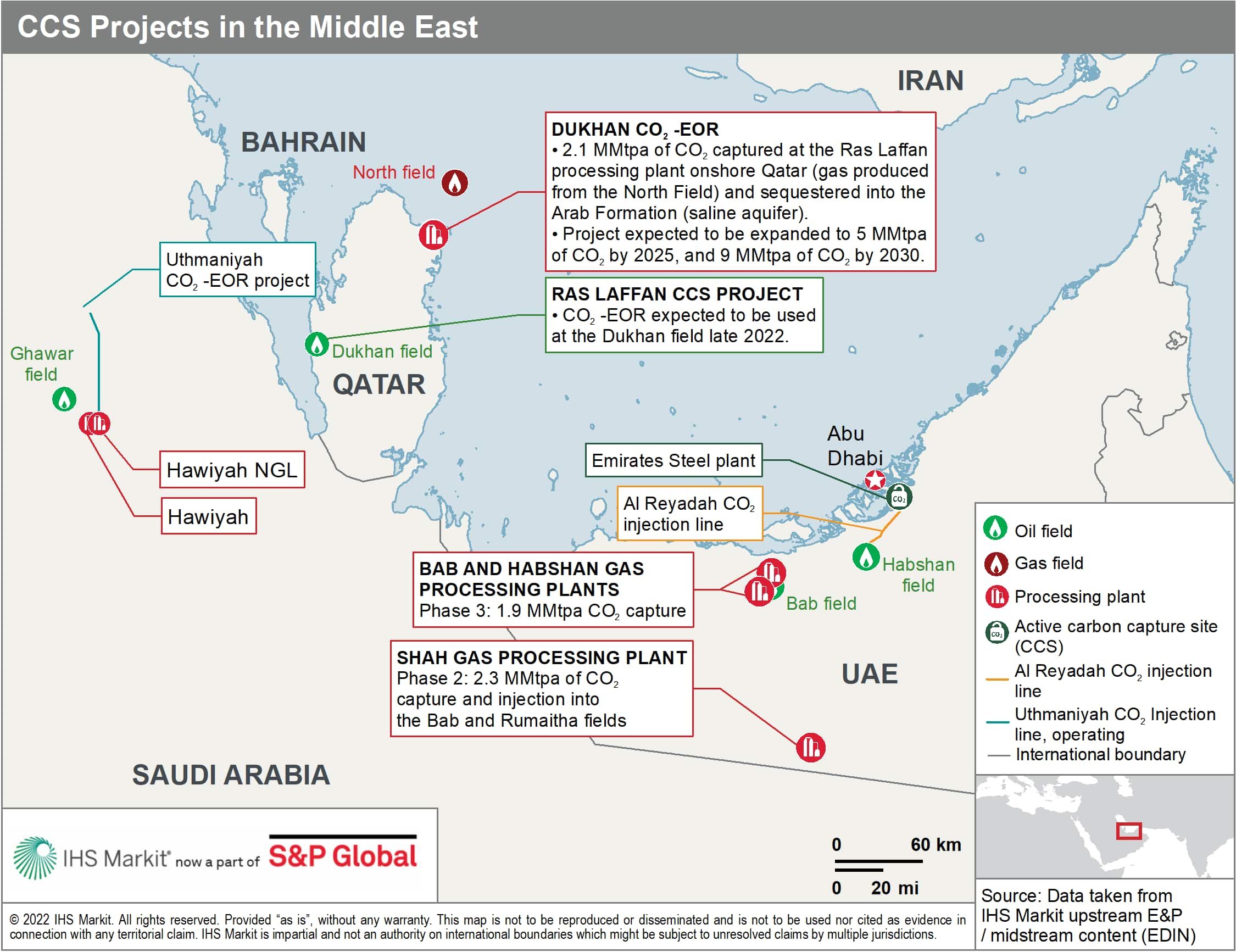 Despite the high likelihood that the cost of green hydrogen will decline over time, blue hydrogen will remain a competitive option in regions with low-cost fossil fuels and CO2 storage resources. Alongside this, blue hydrogen production is associated with more than 800 MMtpa of CO2 globally, providing an opportunity to address these emissions, with CCS currently capturing approximately 3.7 MMtpa CO2 from hydrogen-production facilities. 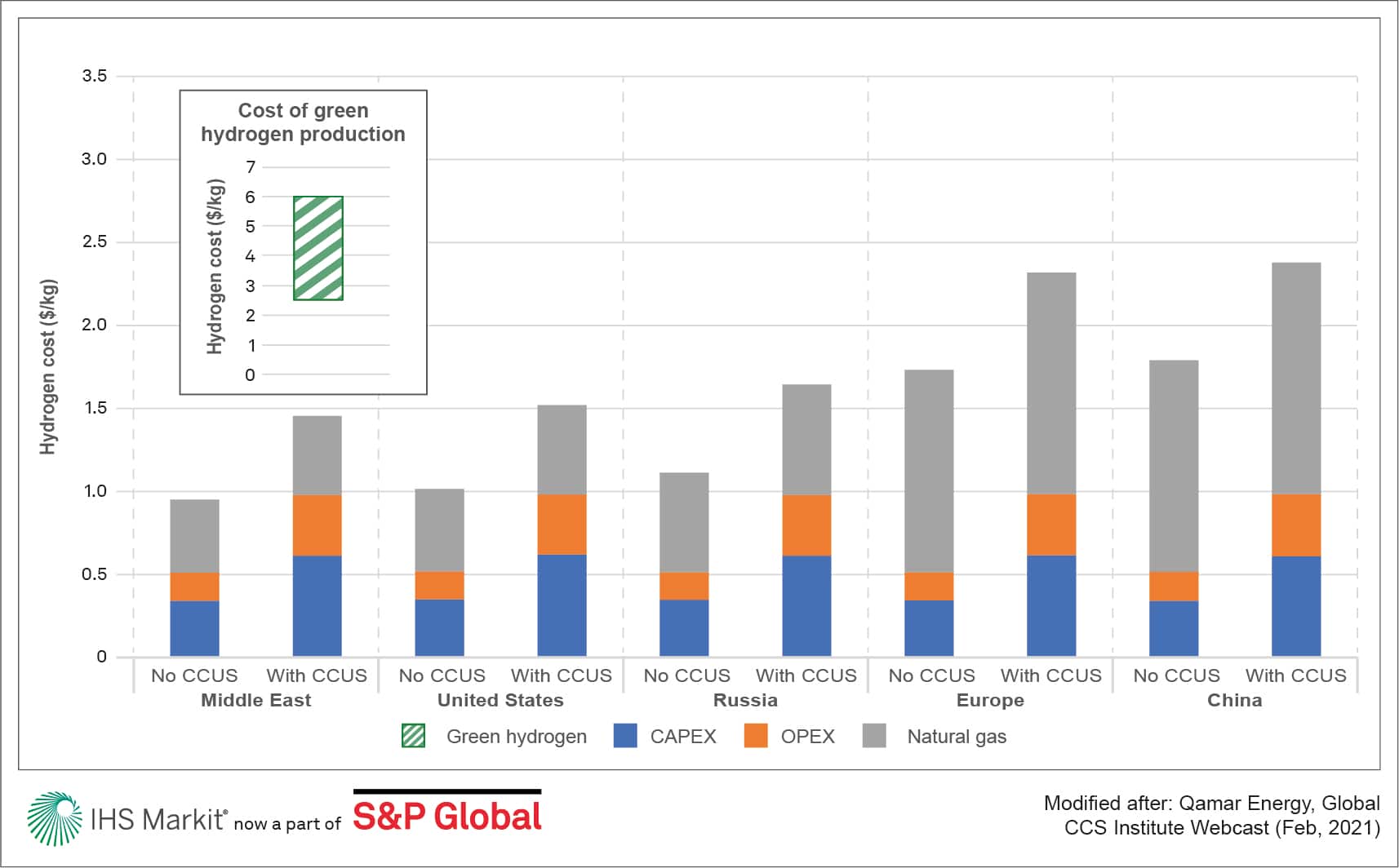 For further insight please see the October 2022 edition of the PESGB titled "Carbon capture and storage (CCS) in the Middle East: a future powerhouse of the hydrogen industry?" where the topics discussed herein are elaborated on further (publishing on 17th October 2022).