Condensate is an ultra-light crude oil near the vapor point. Because of the limited set of products that can be made from condensate, it typically trades at a discount to other crude oils. One exception being in western Canada where condensate has become a critical part of the heavy oil transportation system. In its natural state, bitumen produced from the Canadian oil sands is not able to be transported by pipeline and it must be upgraded into lighter synthetic crude oil or diluted with lighter hydrocarbons to reach market. Condensate has become the preferred blending agent. Blending agents are not free, and the lower density of condensate compared to other blending options, such as light conventional crude oil, means less of it is required to meet pipeline transportation requirements. The most common ratio of bitumen to condensate is about 28% diluent to 72% bitumen or on a per barrel of bitumen production about 0.39 barrels of condensate are required.

Meeting oil sands diluent demand has become a large business in western Canada. As seen in Figure 1, in 2019 about 1.9 MMb/d of bitumen required about 750,000 b/d of diluent. This is a three-fold increase from a decade ago, when demand was 250,000 b/d. 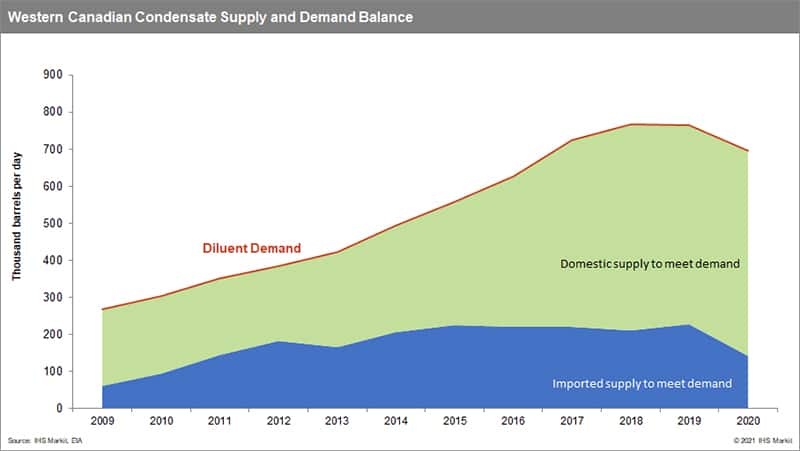 Oil sands diluent demand exceeds regional supply and imports from the United States have grown alongside of Canadian oil sands output. Most of this demand is met with pentane plus or condensate, with smaller volumes of refinery naphtha, synthetic crude oil and light sweet crude oil also being sourced as diluent, as noted in Figure 2. In total about 70% of oil sands diluent demand is met by condensate with about four-fifths of this being supplied by domestic producers. The remainder—about 125,000 b/d in 2019 - is imported up from the United States. Imports make their way from the US via one of two inbound pipelines: the Cochin pipeline, with a capacity of 95,000 b/d, or the Southern Lights pipeline, with a capacity of 180,000 b/d. NOTE: Pipeline capacity numbers come from the Canadian Energy Regulator. 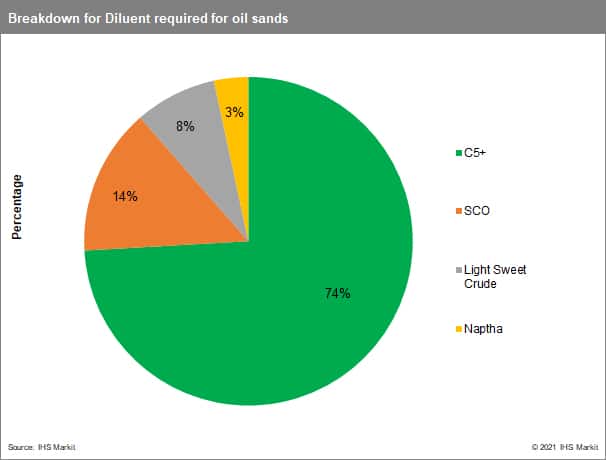 This unique relationship between oil sands production and ultralight crude oil has resulted in a price premium for condensate in western Canada as opposed to a discount in other markets. It is also an actively traded product with buyers throttling their buying based on regional prices. In turn diluent can impact the value producers ultimately receive for their oil. These attributes make for a very interesting aspect of the western Canadian oil market. Traders closely watch regional demand, density of domestically sourced condensate which can impact blend rates, cost, and import volumes.