In response to the energy and cost of living crisis in the UK, the Government lifted the moratorium on fracking in England during September 2022, but the moratorium remains in Scotland and Wales. Domestic gas production has been in decline since 2000 with the UK becoming a net importer of gas in 2004 (see Figure 1). The government hopes shale gas can accelerate domestic energy supply with the aim of the UK becoming a net energy exporter by 2040. The government believes that shale gas has the potential to reduce dependency on imports, improve energy security, deliver tax revenues, and benefit communities through job creation. However, there are still hurdles associated with the industry, which include the geological complexity, commerciality, limited effect on energy bills and widely publicised environmental impacts. Local support is required for granting planning permission for future wells; however, stakeholders are often fiercely opposed, even with companies looking to reinvest into the local community. 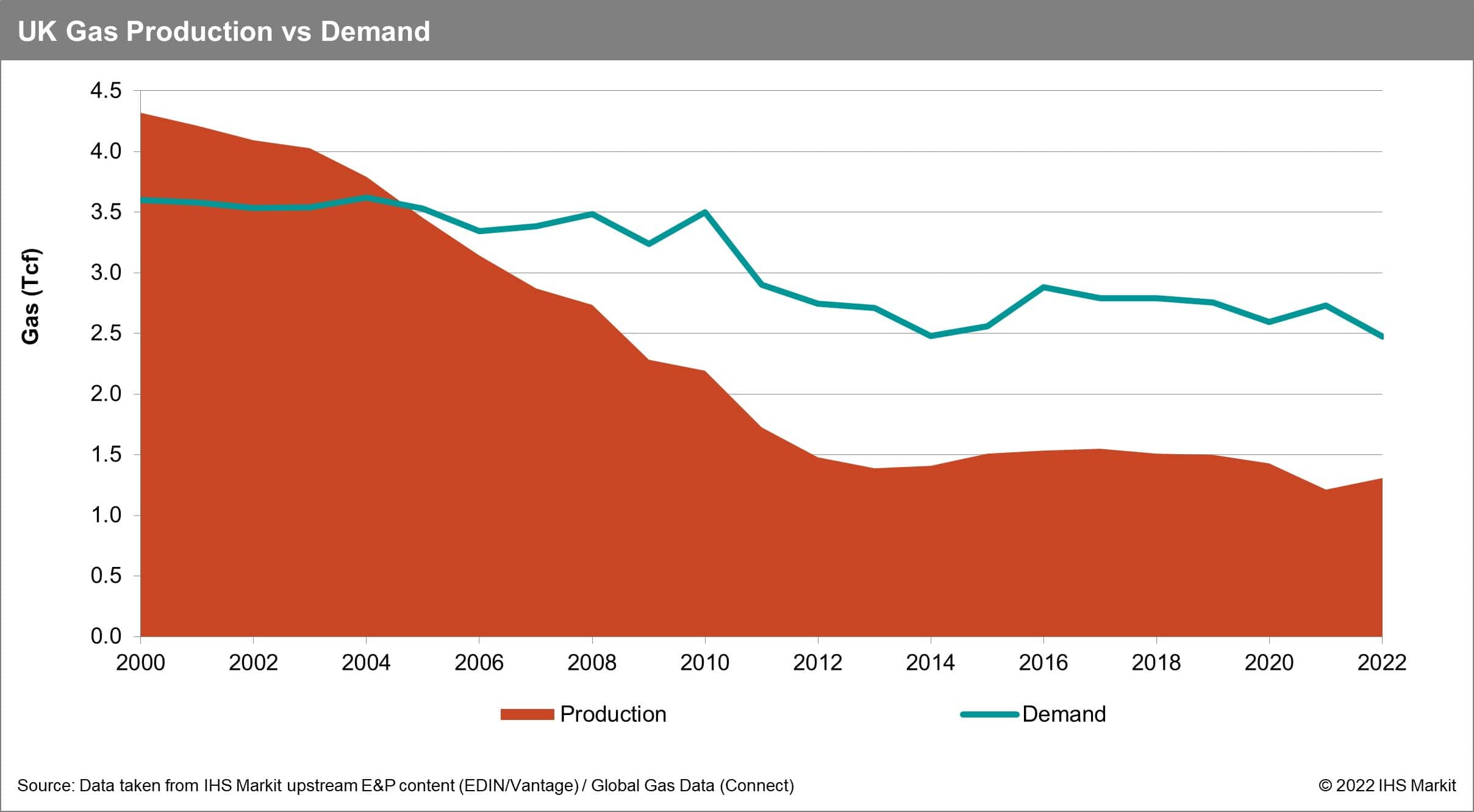 A total of 14 wells have been drilled to explore for shale gas in the UK, with only three wells being fracked to date. Currently, there are no proven shale gas reserves due to the lack of wells drilled and tested, which limits the understanding of well deliverability. The government believes through lifting the moratorium and drilling more wells, it will allow the commerciality of shale gas to be fully evaluated. The UK shale gas industry is currently focussed on the Carboniferous Bowland-Hodder Shales in the north of England. In 2013, the British Geological Society (BGS) estimated the area to hold GIIP of 1,139 Tcf. The UK consumes approximately 2.8 Tcf a year and if 10% of the resource was recovered then shale gas could suffice consumption for over 40 years. As new research has emerged the resource estimate has been downgraded. Whitelaw et al. (2019) and Lodhia et al. (2022) calculated GIIP of 140 Tcf and 131 Tcf respectively which is ten times lower than what the BGS derived but still a significant resource. The research was based on UK shale data and took into consideration the geological complexity in comparison to the BGS study which focussed on US analogues.

Reversing the moratorium will not provide a quick fix to reducing UK gas prices because UK gas is traded on an international market where prices are set in relation to global supply and demand. If the resource potential of shale gas is proved, gas storage facilities could be required if production exceeds demand. The UK has some of the lowest storage capacity in comparison to other major European countries. Therefore, the gas could be exported rather than used domestically until capacity issues are addressed.

The diverse nature of the UK's geology will pose significant challenges for fracking operations. Basins in the north of England have been subject to a complex geological history resulting in highly faulted and compartmentalised basins, which has reduced the economic potential of the shale gas. Thousands of wells would be required to be drilled to ensure commerciality over areas with high population densities, which would increase the cost and time to produce shale gas in the UK.

Shale gas provides an opportunity for the UK to significantly increase energy security by increasing domestic gas production and reduce reliance on imports in the medium to long term. This could provide the UK with more bargaining power when negotiating long-term gas supply contracts. However, shale gas will not provide an immediate solution to energy security due to the time it will take to drill the number of wells required to produce commercial quantities, coupled with the requirement of drilling rigs with specialist equipment and highly skilled fracking crews which are not currently available in the UK. Finally, local support and planning permission are key to commencing operations and this remains an enormous hurdle for the industry.

Shale gas production could reduce the reliance on imports which have a higher associated carbon footprint. The North Sea Transition Authority reported that domestic production has less than half the emission intensity of imported LNG. Gas is the cleanest fossil fuel and will play a significant part in the UK reaching carbon neutrality. Shale gas could be used as a bridging fuel through replacing coal and oil to produce energy until renewable and nuclear capacity increases.

However, the process of fracking is fiercely opposed by environmentalists especially following the induced seismicity from hydraulic fracturing at the Preston New Road wellsite in 2018 and 2019. Another environmental concern is the risk that fracking poses to groundwater contamination. However, the depth of shale in the UK is often much deeper than the aquifers and unlikely to pose a major risk. Large supplies of water are required for fracking operations and the method and rate of extraction could impact local water supplies. Other impacts to local communities include increased traffic, damage to the natural environment and noise and air pollution.

Based on the aforementioned points, the lifting of the moratorium on fracking could lead to an increase in domestic production, however the understanding of the environmental impacts and gaining societal acceptance must be addressed before shale gas can positively contribute to the UK's energy security.