Global floating photovoltaic (FPV*) installations are forecast to increase 143% from 2019 to reach over 900 MW in 2020 according to IHS Markit's 'Floating PV Report - 2020'. The total installed capacity at the end of 2019 was estimated to have reached 1.5 GW. This was driven in recent years by a surge in the number of floating PV systems installed globally in countries such as China, South Korea, Japan, and the Netherlands. These countries have taken a lead with developers installing large quantities of FPV to gain an in-depth understanding of the technology as well as installing pilots to test the capabilities and cost effectiveness of the technology.

Floating PV represents a growing opportunity for developers to install solar in countries that are land constrained, or in specific locations that have favorable conditions such as water bodies with proximity to existing grids, such as hydropower dams or water treatment plants where they can use of existing infrastructure to make floating PV more cost competitive. Offshore installations at pilot stage are proving successful and are being closely monitored as they increase in size. However, in some cases floating PV will continue to be a relatively niche technology as countries, and developers consider it a relatively expensive method of installing solar compared to ground-mount solar on land and roof-top solar especially with regard to stringent requirements of anchoring, insurance, permits and water surface rights. 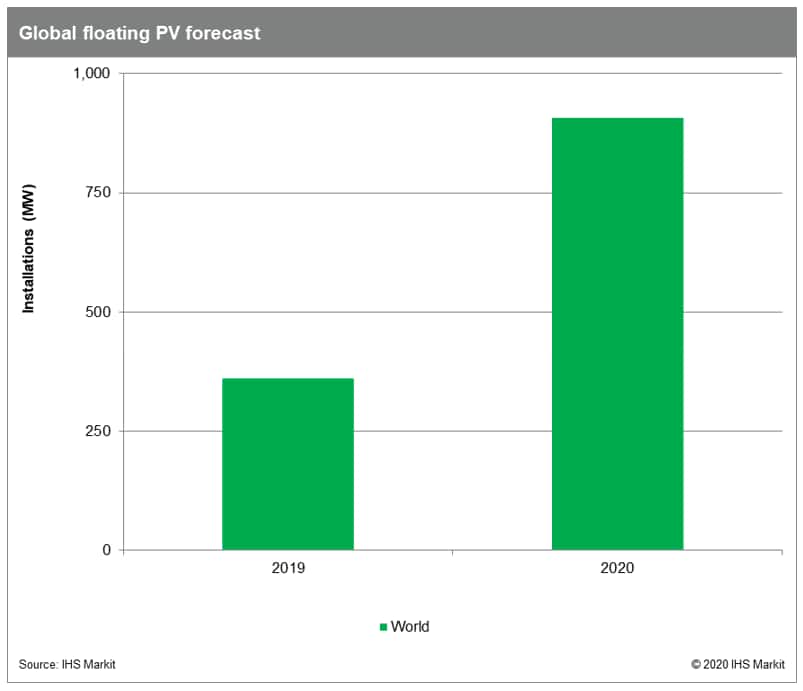 FPV installations continue to be get larger

New records continue to be broken as both suppliers and developers increase their knowledge relating to the capabilities of the FPV technology. Currently, China holds the record for the largest floating PV installation of 150 MW in Anhui, but this is set to be surpassed by a 180 MW installation in Taiwan due to be completed in 2020/21 using both Sungrow and Ciel et Terre floats. BayWa r.e. currently has the largest FPV project in Europe, completed in the Netherlands, at 27.4 MW in size.

China maintained its ranking as the largest market for floating PV for the third year in a row in 2019. Its rate of installations declined in 2019 compared to record installations in 2018 owing to the general decline of the Chinese PV market following policy support uncertainty in 2019 and removal of top-runner policy which helped incentivize usage of high-end technology. However overall, China's installed floating PV base is estimated to be double the next largest eleven countries in terms of installed base greater than 5 MW. China continues to install large amounts of solar on/over water but many of these installations are located on piles and not floating mounts and as such not considered floating PV.

IHS Markit expects Asia to account for over 70 percent of total floating PV installations in the next five years. The top-three markets are expected to be India, South Korea and Vietnam which will account for over half of total installations if development and completion continues as planned. IHS Markit is tracking over 300 floating PV projects globally in its 'Solar deal tracker' from early stage development to under construction that plan to be installed in the next five years, and of which are heavily concentrated in Asia. Tenders and auctions are expected to be the main drivers to help the adoption of floating PV in many of the Asian markets and the fallout from the impact from Covid-19 may dampen the rate of installation of floating PV in these markets.

Outside of Asia, key markets will be the Netherlands in Europe owing to its aggressive target for floating PV due to having an abundance of shallow inland water and its support via the SDE+ subsidy scheme. Brazil is expected to be the biggest market for floating PV in the Americas due to its siting of floating PV on hydropower plant sites.

Floating PV installations are expected to grow strongly in the coming years due to an increasing pipeline of global projects. Many of the largest planned installations are facing delays with tenders, site challenges, and financing, but expectations are high for record-breaking floating PV systems to begin construction shortly. Floating PV may not be the cheapest method of installing solar, however, its benefits can outweigh the challenges. In many countries, particularly densely populated areas, there is an appetite to utilize this technology especially where sites are close to grid connection points, making projects economically viable, and weather patterns are manageable. Disused mining sites, hydropower plants, shallow inland waterways, and man-made reservoirs, are among the many locations to be considered attractive, while offshore floating solar is tested and evaluated further.

*Floating PV is defined as being mounted on buoyant platforms, or membranes, on a body of water. It is not fixed on piles or bridges. 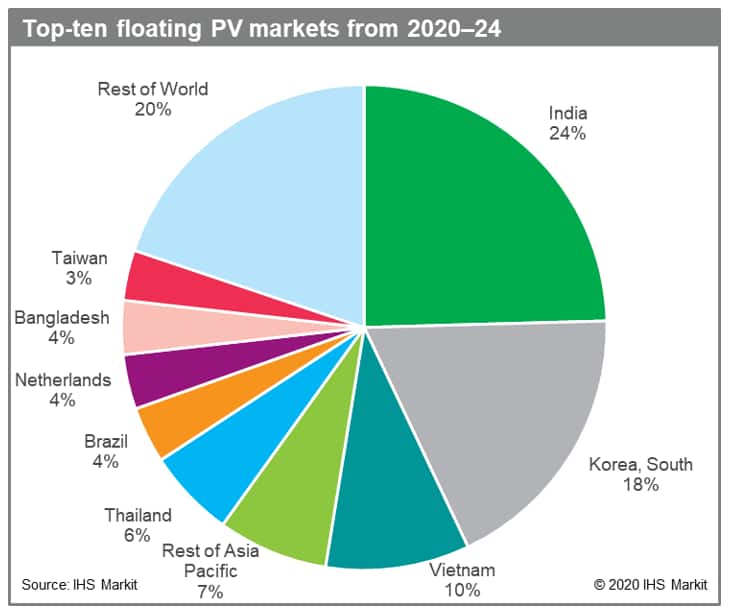 Learn more about our solar PV research and analysis.

IHS Markit experts are available for consultation on the industries and subjects they specialize in. Meetings are virtual and can be tailored to focus on your areas of inquiry. Book in a consultation with Cormac Gilligan.