As one of the top oil producers in Oklahoma, this company began using an electronic system to make information available to all of its employees. Production data is no longer entered manually so it is available for analysis the next morning and overall production increased because problems are resolved as much as a week sooner. 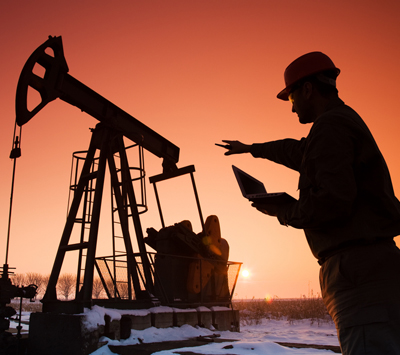 Mack Energy and its associated interests typically drill or participate in 10 to 20 new wells per year. About 15 staff pumpers and several contract pumpers collect data daily in the field for producing and waterflood wells. Until 2001, pumpers logged production in gauge books and submitted them weekly. A production clerk would then re-enter that data in spreadsheets. If staff wanted to look more closely at a specific well or lease, there was just one gauge book with that information. With the lag between pumpers recording data in the field and availability of that information in the office, foremen, engineers and managers looked at production data that was typically a week old.

Mack needed an electronic means of recording production data to eliminate manual data entry and make that information available to everyone more rapidly - to ultimately expedite troubleshooting and increase production.

In 2001, Mack Energy brought in FieldDIRECT from S&P Global as its production database. Pumpers record production, pressures, volume, and other data right at the well on hand-held units. At the end of the day, they download that data to a computer and it is immediately available for analysis via a Web interface.

"We reviewed several options before choosing FieldDIRECT," said Randy Smith, VP of Production. "We felt that the overall package offered by FieldDIRECT for a set price per month per well, instead of requiring a lot of up- front costs, was a good fit with what we wanted to accomplish."

With FieldDIRECT, pumpers record daily numbers for oil and gas producing units and injection wells. They also make notes about anything unusual, such as equipment or electrical outages. At the end of the day, some upload the data back in the office while others do so from home computers. They can verify the accuracy of information going back about 30 days right on their hand-helds, or check it online from any computer.

Pumpers quickly began using the application in their daily workflow after minimal training. With the cumbersome, manual process before, they "were more than ready to get rid of the old paper system," said Danny Bryant, Production Superintendent.

Glenn Kovar, Pumper, appreciates that FieldDIRECT keeps track of everything he does in a single location as he records daily data on about 40 wells in the Velma, Oklahoma area. Because that information is entered throughout the day, his office time at day's end has been cut in half and he no longer has to juggle multiple gauge books. "Without FieldDIRECT, we'd just have a lot more paperwork," Kovar said.

Same goes for Allen Jordan, also a Pumper, who appreciates that FieldDIRECT handles the calculations he must complete each day. "It does all your figuring for you," he said.

If we've got a problem, we can fix it in a day now. Before, we might be a week behind. FieldDIRECT increases production because we don't have those delays.

Before FieldDIRECT, Mack's field foremen received production reports on a weekly basis. For Rodney Kaus, Field Production Foreman, that meant spending a full day looking at week-old data in separate gauge books - for all 120 leases he oversees. With FieldDIRECT access, he and the other foreman now view their pumpers' activities the next day.

"Everybody has forgotten about all that paperwork now," Kaus said. "I can look at all my leases in 10 minutes. I can see my production to make sure it's not low and look for any changes. I look at graphs for about a month going back. It's easier to see than on a ledger."

Danny Deaton, also a Field Production Foreman, manages wells on waterflood injections by comparing current numbers to levels from a year before. "In minutes, I can pull up a report," Deaton said. "I like the way you can customize it for whatever amount of time you want. It makes it a whole lot easier to track the wells I'm in charge of, which is right at 100-plus. We could do reporting before FieldDIRECT but it was time-consuming and you had to do it on paper."

In the past, pumpers might have forgotten to tell their foreman about known problems in the field. Because they now make notes in FieldDIRECT, anyone looking at data can see corresponding notes for explanation.

Timely information contributes to faster decision- making. "If we've got a problem, we can fix it in a day now," Kaus said. "Before, we might be a week behind. FieldDIRECT increases production because we don't have those delays."

Production and engineering staff in the office likewise use FieldDIRECT on a daily basis. While a percentage of staff time was once devoted to basic data management such as re-entering and auditing data, and plotting data on charts, FieldDIRECT has eliminated the need for re-entry of well data. "Since we've started using FieldDIRECT, I would estimate that my production clerk is spending as much as four days per month less processing data than before," Smith said.

Without the need to input data, engineers and managers view the previous day's production each morning. "It definitely allows us to see if a well is dropping off and see what's going on with it," said Dinah Mayes, Engineering Technician. "Unlike before FieldDIRECT, we can jump on a problem before it's a week or two into it." Access to the most up-to- date production data helps Mack identify short-term developments quickly. FieldDIRECT automatically plots data into a variety of graphical formats so users see changes in production. "We have found that the trend data is key for quick decision-making," Smith said.

From pumpers to company management, individuals throughout Mack Energy now have next-day access to current production data, available from any computer. "Before it was one paper book we posted to," Mayes said. "With FieldDIRECT, it's nice that anyone can access it anytime and use it for as long as they want, and not interrupt someone else's work. It's always there and always available."

Mayes, who interfaces with S&P Global regarding FieldDIRECT, also finds support for the product exceptional. Anytime she needs to add or change a well, the company processes it immediately and the well shows up in Mack's database.

"S&P Global support has been really good," she said. "S&P Global people are always right on the ball."

Such responsive customer support from S&P Global, along with the increased production and immediate data access, make FieldDIRECT an integral part of Mack Energy's production operations.

If we've got a problem, we can fix it in a day now. Before, we might be a week behind. FieldDIRECT increases production because we don't have those delays.