As the global sustainability movement gains momentum, investors are pressing companies to tackle environmental, social and governance issues broadly and climate change specifically. As a result, boards and management teams are increasingly paying attention to climate change — a topic in the spotlight this November as global policymakers and corporate leaders convene in Glasgow for the U.N.’s 26th annual Conference of the Parties, or COP26.

Despite the growing focus on climate change, a new analysis from S&P Global Sustainable1 shows how far the corporate world must move the needle to align with Paris Agreement goals. Our data shows that the companies composing key indices in the U.S., Europe and Asia-Pacific are not on track to meet the Paris Agreement goal of limiting global temperature rise to 1.5 degrees C relative to preindustrial levels. Most sectors are not even on track to meet a less ambitious 2-degree warming goal. Some fall short of aligning even with a 3-degree scenario.

And that matters at a time when the frequency and severity of extreme weather events appear to be growing. In summer 2021, a sobering report from the U.N.’s Intergovernmental Panel on Climate Change, or IPCC, told corporations and governments in no uncertain terms: Act with urgency to lower emissions and adapt to the impacts of climate change at a more rapid pace and at greater scale.

The corporate world is making some strides. Over the past year, we’ve seen a precipitous increase in the number of companies setting goals to reach net zero emissions by 2050. But with stakes this high, S&P Global Sustainable1 believes that setting long-term climate commitments is not sufficient. Companies must also provide credible, near-term signposts on their path to decarbonization. And we believe leadership teams must be accountable for those near-term goals. 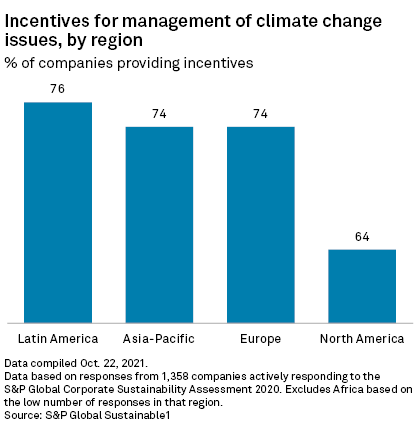 One way to ensure accountability is to tie remuneration to climate goals — an approach that regulators and investors across the globe are weighing.

And indeed, some companies already link executive compensation to climate goals. Around three-quarters of companies in Latin America, Asia-Pacific and Europe that participated in S&P Global's 2020 Corporate Sustainability Assessment, or CSA, offer incentives for the management of climate change issues.

But North American companies lag peers in other parts of the world when it comes to linking compensation to climate change goals, according to our analysis. The latest data from the CSA shows that 65% of U.S. companies participating in the annual evaluation of sustainability practices provide incentives for the management of climate change issues. Moreover, the average age of S&P 500 board members is over 60 and the average age of CEOs is nearly 60, meaning that most of the current corporate leaders at the largest U.S. companies will have stepped down by the time 2050 climate deadlines arrive. This presents a challenge for investors seeking to hold leadership teams accountable in 30 years for the pledges they make today.

Taken together, our findings reinforce the need for companies to set credible near-term signposts on the path to their ambitious long-term climate targets. The analysis also suggests that there is significant room for improvement when it comes to creating the climate accountability that more and more investors and regulators are demanding.

Most sectors are far over budget on direct emissions

Under the Paris Agreement, more than 190 parties committed to limiting the global rise in greenhouse gas emissions to well below 2 degrees C, and preferably 1.5 degrees C, relative to preindustrial levels. The legally binding agreement is the first of its kind in that it brings together nations from around the world to work toward a common climate goal.

The summer 2021 IPCC report, however, warned that even under a net zero scenario, global warming could reach as high as 1.7 degrees relative to preindustrial times by 2040.

Our analysis of S&P Global Trucost Paris Alignment data shows that based on current trajectories, almost every sector in the S&P 500 will overshoot the goal of limiting warming to “well below” 2 degrees — another way of describing that 1.5-degree target. The data set sums actual emissions from 2012 to 2019, eight previous years, and then forecasts emissions for the following six years, from 2019 to 2025.

Importantly, our analysis only includes Scope 1 emissions, those created by company operations, and Scope 2 emissions, generally those associated with any electricity a company purchases. This analysis does not include Scope 3 indirect emissions, which occur in the supply chain — including when customers use the products or services the companies provide.

Financial institutions like banks have relatively low Scope 1 emissions but higher Scope 3 indirect emissions financed through their loans and investments. Scope 3 emissions are inherently harder to calculate, partly because they depend on accurate emissions information from suppliers. Some of those suppliers operate in countries without disclosure requirements. Generally speaking, the lack of transparency and accountability for emissions created in corporate supply chains is a significant concern when assessing the achievability of net zero commitments and completeness of reporting against these targets.

Energy companies are poised to be far over budget relative to the 1.5-degree goal — more so than any other sector in the S&P 500. In fact, the analysis shows that three sectors are not even on track to meet a 3-degree goal at the current rate of decarbonization: Energy, materials and real estate.

How do indices in other parts of the world compare? Our analysis found that nearly every sector in the S&P EUROPE 350 is over budget under a 1.5-degree scenario — with the energy and materials sectors missing the mark by the most.

Under a 2-degree scenario, most sectors in the S&P Europe 350 will still be over budget. Only the utilities, healthcare and financials are on track to meet this less ambitious scenario, according to Trucost data.

And under a 3-degree scenario, many sectors in the index remain over budget — most significantly, energy companies, which are collectively over budget in this scenario by 678 million carbon dioxide-equivalent metric tonnes.

The picture shifts slightly when considering the S&P Asia Pacific LargeMidCap index. Every sector in this index will miss the Paris Agreement goal of limiting warming to 1.5 degrees, according to Trucost data.

Cumulatively, the S&P Asia Pacific LargeMidCap is poised to miss the 1.5-degree mark by close to 9 billion carbon dioxide-equivalent metric tonnes — more than the S&P 500 and S&P Europe 350 combined.

As many sectors overshoot Paris Agreement goals, a question that begs to be answered is: How do you create accountability today for a goal nearly 30 years in the future? This question takes on added weight when considering the age of many corporate leadership teams. The average age of S&P 500 directors is 63.1, up from 60.4 five years ago, according to our analysis of S&P Global Market Intelligence data.

Many of the directors and C-suite executives currently at the helm of S&P 500 companies will have retired in 28 years. Linking executive compensation to more near-term climate goals could be an effective way to add accountability to climate goals coming due far in the future.

There is support in some corners of the sustainability world for tying executive compensation to ESG-related goals.

In February 2021, for example, the Principles for Responsible Investment supported a European Commission proposal to mandate inclusion of ESG issues into executive pay under the bloc’s Sustainable Corporate Governance initiative. The U.N.-supported PRI has over 3,000 signatories worldwide, including pension funds, insurers, investment managers and service providers with approximately $100 trillion in assets under management. In June 2021 the group released recommendations for investors to drive more meaningful integration of ESG metrics in executive pay.

To get to the long-term goal, you need near-term accountability

Some companies already have incentives for the management of climate issues. Our analysis found that 86% of global utility companies participating in the 2020 CSA provide incentives for the management of climate change issues — a higher percentage than any other sector. This was followed by the consumer staples sector (83%) and energy sector (82%). 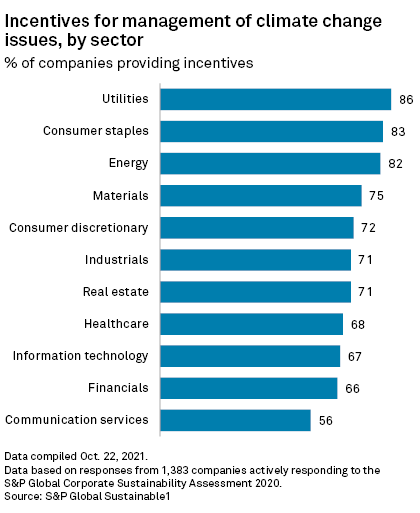 Many companies have set ambitious climate goals, and S&P Global Sustainable1 welcomes these long-term commitments. At the same time, the current lack of alignment with the Paris Agreement demonstrates the need for near-term plans.

As management teams and boards trend older, it becomes clear that those near-term plans must include an element of accountability for corporate leaders no longer in charge when 2050 arrives. Tying remuneration to climate goals is one method of creating that accountability, and it’s gaining traction with investors and in some jurisdictions.

While some companies do have policies linking pay to climate goals, there is room for far greater adoption. As the sustainability world turns its attention to COP26, we cannot lose sight of the role that corporate governance must play in holding leaders accountable for long-term climate goals.

Zero in on net zero with unparalleled data and insight from S&P Global Sustainable1.

We’re here to help you accelerate your journey to carbon neutrality. Get connected with an ESG specialist who can advise you on your next steps.


Talk To An Expert