ESG at the Forefront: The Investment Industry Strives for Net Zero

The downside of buying these certificates is that they don’t always encourage the production of new wind or solar farms.

That could undercut efforts to fight climate change, which require a huge expansion of clean energy to replace fossil fuel power.

Many U.S. and European companies have set lofty net zero targets, but their approach to clean energy doesn't always encourage the production of new wind or solar projects — an outcome that could undermine broader corporate efforts to cut emissions and fight climate change.

For most companies, the main source of greenhouse gas emissions is the fossil-fuel-based electricity they use. That's why, in pursuit of a net zero carbon footprint, many have promised to rapidly switch to "100% renewable energy." But a huge chunk of the wind, solar or hydro power that companies purchase isn't actual physical electricity, but tradable instruments called "unbundled" certificates. Under this system, a solar farm is allowed to sell its power to the grid and separately sell credits against that power to corporations and other buyers. A corporate buyer of these standalone credits may claim to have hit its clean energy goal.

But the transaction has little real-world impact: it doesn't necessarily help to displace fossil-based electricity, and it doesn't help much to decarbonize the grid. 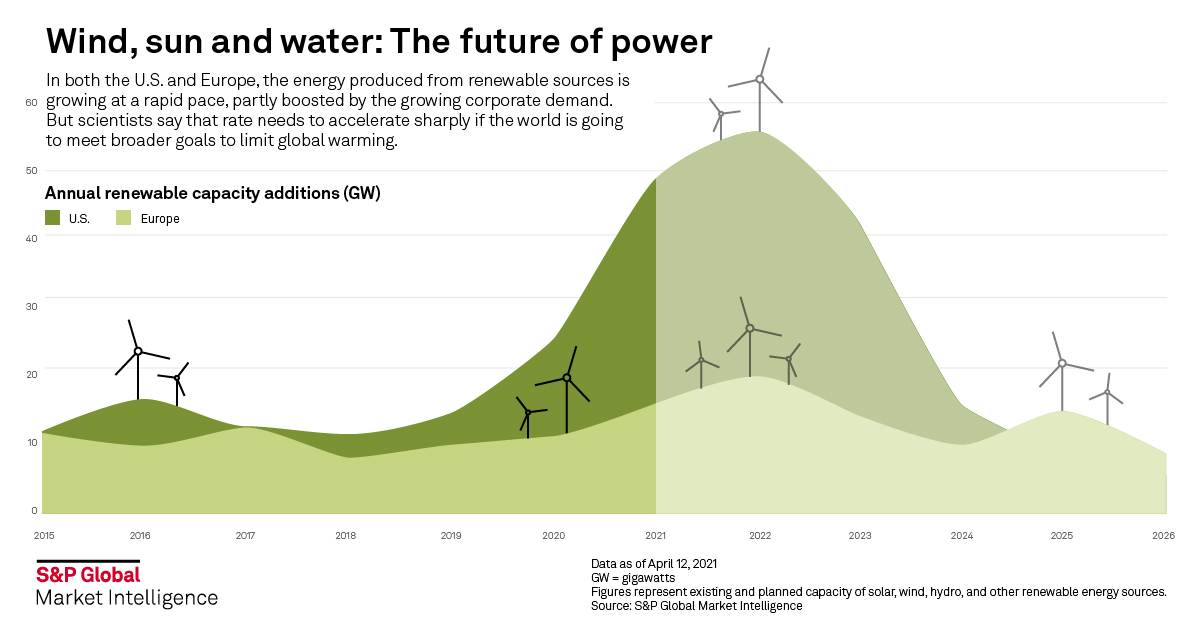 The purchase of unbundled credits "can make it look as if a company's electricity emissions have become zero, when they haven't," says Matthew Brander, senior lecturer of carbon accounting at the University of Edinburgh.

In the U.S., the credits are known as renewable energy certificates, or RECs. In Europe, they are called guarantees of origin, or GOs. Each REC represents 1 MWh of renewable electricity, which is enough to power about 2,000 homes for an hour. Once a REC is "retired" by the buyer, it cannot be reused. In the U.S. there also exist "compliance RECs" that electricity service providers purchase, but that's a different market from the voluntary RECs that corporations tap into.

The sale of unbundled RECs is booming; today they are the most common form of green-power procurement in the voluntary market. U.S. sales of unbundled RECs jumped from 19.8 million MWh in 2010 to 68.7 MWh in 2019, according to the latest data compiled by the National Renewable Energy Laboratory. Some of the biggest buyers are corporations. 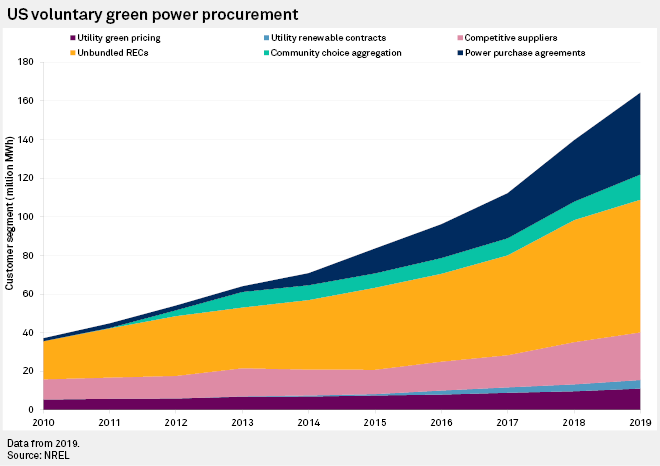 Unbundled RECs are a little less popular than they once were, but they nonetheless accounted for 42% of renewable energy share in 2019, down from 60% in 2015, according to the 2020 annual report of RE100, a global initiative on renewable energy that counts more than 290 major companies as its members. About a third of RE100's members bought over 75% of their renewable energy through these instruments, even though the group itself backs alternative methods.

"We recommend members source more directly, through on-site generation or long-term agreements when possible," RE100 says in its report.

Companies can lower the emissions associated with the electricity they buy — known as scope 2 emissions — in several ways. They can affix solar panels to buildings and generate their own clean power. They can buy renewable energy directly from a utility. Or, they can sign a long-term contract to purchase power from a newly-planned clean energy plant, thus supporting its construction. On April 8, for example, big U.S. bank Wells Fargo entered into a 20-year agreement to buy power from a planned solar farm in North Carolina that will only start to operate in 2022. These are valuable steps towards emissions reduction because they spur additionality — the creation of wind, solar, hydro or geothermal projects that didn't previously exist. In simple terms, additionality means not just reshuffling existing renewable energy, but instead adding something new that results in a net positive to the renewable energy world.

Indeed, some big players such as Amazon, Google-owner Alphabet, and fast-food giant McDonald’s now buy a large amount of their renewable electricity from direct energy sources. As a result, the U.S. clean-energy contracted capacity of power purchase agreements, green tariffs and outright project ownership jumped from 1.54 gigawatts in 2016 to 10.6 gigawatts in 2020, according to the Renewable Energy Buyers Alliance.

Most companies, however, prefer to meet their goals through the less effective route of buying unbundled RECs. When a company buys an unbundled REC — one that is acquired without also acquiring its underlying energy — it creates little or no additionality. Most wind and solar farms were built with the help of government subsidies, not REC dollars. And when the operator of a wind or solar farm earns fresh dollars from REC sales, it is under no obligation to use the money to expand capacity. The transaction merely reshuffles existing renewable energy.

Using RECs also allows a company to say it has reduced its scope 2 emissions simply by writing a check, while it can continue to put out greenhouse gases as before. Because many companies are taking this route, critics of RECs say the effort to reduce real-world emissions could be sharply undercut.

"It's a very sensitive topic," says William Gore-Randall, a research analyst at Lazard Asset Management who has broached the subject with several companies. "They get very cagey and most don't want to talk about it."

The big draw of RECs is the price. Thanks to oversupply, they are extremely cheap. In the fall of 2020, a European Guarantee of Origin certificate could be purchased for as little as €0.85 per MWh, a pittance compared to the €40 per MWh wholesale price tag for the underlying electricity itself.

According to Gore-Randall, there is a comparable disparity in the U.S. that allows companies to convert "old and dirty power" to "clean energy" for a mere 1% to 2% premium.

"The reaction when you tell companies about this is mixed," says Brander, the University of Edinburgh lecturer. "Some corporates are horrified when they find out about non-additionality. Others ignore it, saying they'll keep buying unbundled RECs as long as existing standards allow them to do it, and as long as their peers do it."

Some companies openly shun unbundled RECs. IBM won't buy them because it "obfuscates the need for hard public policy decisions and investments ... to genuinely increase the quantity and availability of renewable electricity delivered to the grid," according to IBM's published description of energy use.

Walmart makes a similar argument. "We do not have confidence that offsetting instruments alone are sufficient to drive new renewable projects, as opposed to simply shifting around ownership of existing renewable electrons," says the world's biggest retailer, in a document describing its approach to renewable energy. "Thus, RECs may not have the desired impact of accelerating renewable energy development."

Cloud-computing company Salesforce says it hasn't purchased unbundled RECs on the spot market since 2017. "They don't necessarily lead to emissions reductions, which at the end of the day means that they're not worth our time and attention," says Max Scher, head of clean energy and carbon accounting at the San Francisco company.

Adam White, director of RECS International, a Belgium-based nonprofit that tracks the renewables market, says the criticism about RECS is overdone. He argues that rising demand from companies and other buyers will eventually help counteract the additionality problem. "As more demand for renewable energy comes in, it will mop up everything put in with government subsidies," says White. "Prices will rise as demand goes up."

Nonetheless, any backlash against unbundled RECs could hurt both companies and investors. Buying RECs as a way to cut emissions "undermines a company's greenhouse-gas accounting," says Brander. "That matters whether you're an impact investor or one who is looking to reduce risk."

Gore-Randall of Lazard similarly worries that many REC buyers could be caught off guard. "I wouldn't be surprised if regulatory bodies step up and debate the topic of additionality," he says. "Then, suddenly, if the rules change, companies that use unbundled RECs to measure scope 2 emissions could end up being very exposed."

Gaurang Dholakia contributed to this article.

Learn more about our ESG Solutions