The European Banking Authority will ask banks to disclose information on climate risks and their plans to address those risks starting in December 2023.

Banks’ loan exposure to industries throughout the economy — from energy companies to real estate and everything in between — means they could face write-downs because of climate change policy or extreme weather events.

Lenders will have to disclose the proportion of their loans that are environmentally sustainable, the energy performance of their underlying real estate assets and provide information on exposure to the top 20 polluting companies globally, among other information, the EBA told the ESG Insider podcast.

Regulation is playing a growing role in shaping the direction of the environmental, social and governance movement. Investors have been demanding more consistent disclosure and reporting on climate risks in particular, and more regulators are paying closer attention to how climate change is affecting corporations and financial institutions. The European Banking Authority, or EBA, is one such regulator. The EBA recently announced it will make climate disclosures mandatory from December 2023, something it says will push banks to amass the information they need to manage climate risks.

Why is the EBA planning to regulate lenders’ climate disclosures?

Banks are key in achieving net zero goals because they lend to businesses across vast swathes of the economy. But that position also means they face climate change exposure from many angles, and as a result, regulators are taking steps to ensure they are adapting to deal with that risk. The EBA said it will require lenders to disclose their exposure to transition risk — carbon-intensive activities, fossil fuels and financed emissions — and physical risk in the form of assets directly at risk from the impact of climate change. Banks would also disclose to what extent their financing activities are likely to meet net zero goals.

S&P Global Market Intelligence data shows that companies operating in carbon-intensive sectors are at risk of credit downgrades based on orderly and disorderly scenario analysis by the Network for Greening the Financial System, a group of central banks collaborating on how to tackle climate change. A disorderly scenario implies a delayed or sudden implementation of transition policies such as a carbon price, combined with high costs, while an orderly transition means transition policies are enacted earlier and ramp up more slowly with limited costs. Oil and gas companies face the highest potential credit impact related to transition risks by 2050 under an NGFS disorderly scenario, the S&P Global Market Intelligence data shows, potentially leading to losses for banks that lend to them.

Data as of November 2021.
Based on Network for Greening the Financial System scenarios. An orderly scenario assumes the early introduction of climate policies. A disorderly scenario implies a delayed or sudden introduction of transition policies. Analysis assumes the credit risk of transition risks based on 5,608 companies: 3,800 in oil & gas sectors, 1,290 in power generation sectors, 410 in metals & mining sectors, 95 in the airline industry and 13 in automobile manufacturing.
Source: S&P Global Market Intelligence, S&P Global Sustainable1. Results produced using Climate Credit Analytics.

How will the standards work and what will be the impact on banks?

The EBA said it created a Green Asset Ratio, or GAR, to be introduced in December 2023, and a Banking Book Taxonomy Alignment Ratio, or BTAR, effective in 2024. Both ratios will provide information on how much an institution’s banking book is in line with the EU taxonomy, Pilar Gutierrez, the EBA’s head of reporting, told S&P Global Sustainable1 in a podcast interview. The taxonomy is a list of sustainable activities compiled by the EU. Financial institutions will have to assess to what extent the loans, bonds and equity holdings in their banking book are taxonomy aligned, the EBA said.

A bank’s GAR, required as of the end of 2023, contains information on exposure to large corporates and retail lending, including mortgages and car loans, Gutierrez said. The BTAR, enforced from June 2024, covers exposure to small- and medium-sized enterprises. Both ratios will clarify how institutions are mitigating climate-related risks by supporting the transition and adaptation plans of their counterparties, Gutierrez said. The ratios will demonstrate a bank’s sustainability performance as well as its transition plans and guide stakeholders in investment decisions, she said.

Lenders will also have to provide information on their exposure to the top 20 polluting companies globally, she told us. “We thought it was also important that banks are transparent in their exposure towards these corporates that can be very much impacted by climate-related risks, transition risks.”

How will the EBA disclosures differ from other reporting standards?

Several disclosure frameworks already exist, including the recommendations of the Task Force on Climate-Related Financial Disclosures, which are becoming mandatory in several jurisdictions. In the EU, there is the Non-Financial Reporting Directive.

The EBA developed its disclosure rules by building on the TCFD’s recommendations, Gutierrez told us. The TCFD has provided companies with a voluntary framework since June 2017, and it is designed to steer companies in disclosing material climate risks. Its recommendations include detailing management’s role in calculating and overseeing climate-related risks, as well as conducting scenario analysis to test a company’s resilience to different climate-related scenarios. The TCFD has specific recommendations for banks, including the disclosure of significant credit exposure to fossil fuel assets as well as providing the metrics used to calculate the impact of climate-related risks on their lending.

Gutierrez said the EBA saw room for improvement in the disclosure reports corporations and banks were submitting based on the TCFD recommendations, she said.

“When assessing these reports, we still observe growth for improvement in terms mainly of consistency of comparability of the disclosure,” she said. The EBA rules “should help to address these shortcomings at the EU level by setting mandatory, consistent disclosure requirements with the definition of granular templates and tables and associated instructions. And we hope that it also will also push for better disclosures at the international level by establishing best practices.”

How is the EBA expecting banks to measure their fossil fuel exposure and financed emissions?

Banks will have to disclose the gross carrying amount of loans to, as well as bonds and equity holdings in, carbon-intensive industries and the fossil fuel sector in their banking books, Gutierrez said. A carrying amount is the cost of an asset minus its accumulated depreciation. Banks will also have to disclose their exposure to corporates excluded from Paris Agreement-aligned benchmarks in the EU, she said in the podcast interview. Those are companies that derive revenues from coal, oil, or electricity generation with a certain greenhouse gas emissions intensity, she said. Lenders will need to break down to what extent they finance the Scope 1, Scope 2 and Scope 3 emissions of these companies, Gutierrez added. Banks have relatively low Scope 1 emissions — those are emissions from their direct operations — and Scope 2 emissions — generally associated with electricity a company buys. However, lenders  typically have high Scope 3 indirect emissions financed through their loans and investments.

The EBA said it is also tackling financed emissions and transition risks in sectors such as real estate, and banks will have to report the energy performance and consumption of their real estate portfolios. Buildings are responsible for about 40% of the EU's energy consumption and 36% of greenhouse gas emissions from energy use, according to the European Commission. Fuel consumption and emissions data from S&P Global Commodity Insights’ Global Integrated Energy Model shows that reducing housing sector emissions will be key to achieving 2030 emissions targets in Europe and the U.K. “Banks’ real estate assets are causing a huge part of CO2 emissions in the EU and worldwide,” Gutierrez said. 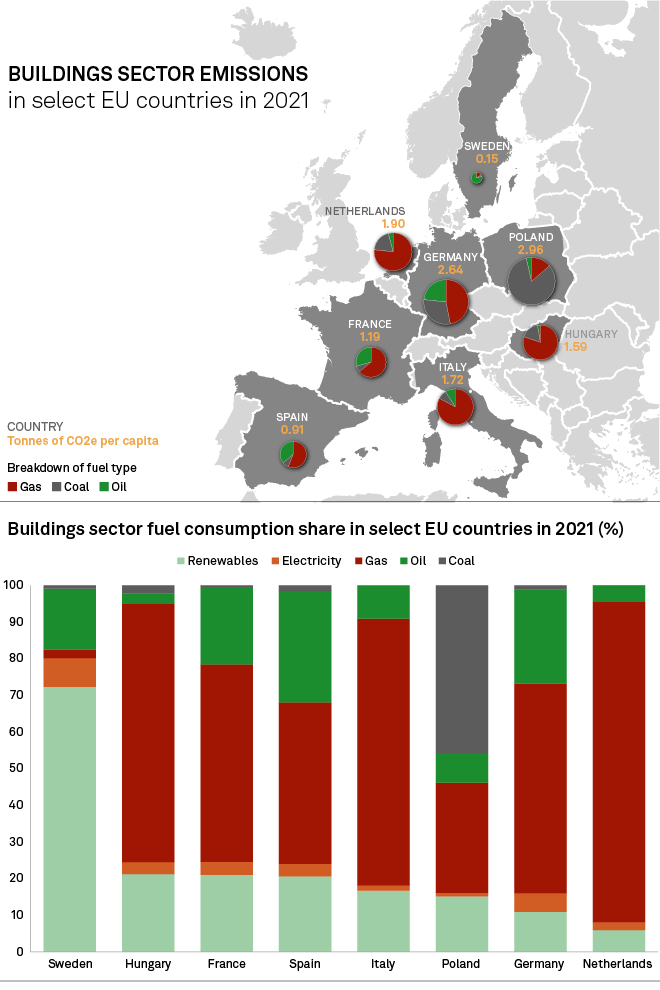 Data compiled June 8, 2022.
Downstream emissions only, not including the impact of methane emissions upstream.
Emissions from electricity consumption are approximated based on share of power generation emissions in the country.
Data is for full-year 2021.
Map credit: Zain Ullah
Source: S&P Global Commodity Insights Global Integrated Energy Model, May 2022, and S&P Global Sustainable1.

Amassing ESG data is a major challenge, particularly when it comes to smaller, private companies. How does the EBA expect banks to meet that challenge?

Nonfinancial corporates in the EU will have to start disclosing how much of their revenues are taxonomy aligned on Jan. 1, 2023, which will give banks the time to collect this information from borrowers before they need to disclose it to the EBA from December 2023, Gutierrez said. For information on SMEs as well as retail exposure, banks will have to request information from their counterparties, she said. For example, for mortgage holders, banks will need to know a house’s energy performance; for a car loan, banks will have to ask for the car’s energy performance certificate, she said. They will also have to work with SMEs to find out how much of their activities are taxonomy aligned, she noted. But they will only have to concentrate on the main business activity of an SME, and not the company’s whole scope of activities, she told us.

"We acknowledge that the first set of disclosures will be in some cases on a best effort basis. But the important thing is that banks start gathering this information and making it publicly available,” Gutierrez said. “We don't expect the perfect set of disclosures from the beginning, but still information which is on a best effort basis or estimates is better than nothing. And this will push banks to gather all this information that they also need for their risk management purposes.”