What Is Blue Hydrogen? 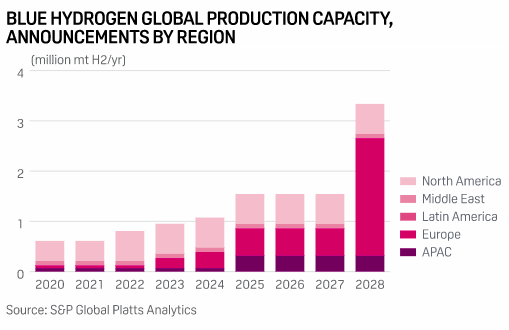 Prices for blue hydrogen -- produced from natural gas via steam methane reforming with carbon capture and storage -- have risen in recent days, driven by stronger natural gas prices in Europe.

But firm carbon allowance prices have driven the cost of producing unabated "grey" hydrogen even higher.

Hydrogen could comprise up to 15% of the global energy mix over the next three decades, but it is expected to serve more of a complementary role in meeting climate goals, panelists said in an April 26 webinar.

"Of course, it's not a silver bullet -- it's one part of what we need to decarbonize," said David Bryson, Uniper's chief operating officer.

Questions around hydrogen's efficiency, cost of production, and scale are still at the forefront of the debate around hydrogen but should not be limiting factors preventing the market from getting off the ground, Bryson said at the Financial Times' Hydrogen Summit.

"There are inefficiencies, but those are removed over time and improved," Bryson said. "They should not allow us to stop from moving forward."

Blue and green hydrogen will both become critical to a net-zero carbon future, helping the global energy industry to meet emissions reductions targets across its entire value chain.

Answerable to increasingly climate-conscious investors, the future of Western Australia's mining sector depends on its ability to use hydrogen as fuel and in downstream processes, experts said May 20.

The UAE plans to focus its efforts on blue hydrogen as OPEC's third-largest producer pushes ahead with its clean energy program, and taps into its oil and gas sector to help create a new industry that is likely to take shape before green hydrogen, an energy ministry official told S&P Global Platts.

"Realistically, blue hydrogen is cheaper than green hydrogen and as an oil and gas producer we are very well positioned to be very competitive when it comes to blue hydrogen and it's coming in the next few years, while green hydrogen still needs more time," Yousif al-Ali, the ministry's assistant undersecretary for electricity, water and future energy affairs, said in a May 16 interview.

Green hydrogen is produced from renewable energy, while blue hydrogen is derived from fossil fuels with carbon capture, utilization and storage. The energy ministry, Abu Dhabi National Oil Co, the country's biggest energy producer, and two sovereign wealth funds ADQ and Mubadala Investment Co. have formed a hydrogen alliance to promote the production and use of the fuel in the UAE, and ultimately for exports.

Blue hydrogen production, promoted by oil companies, will not be economical beyond the short term as green hydrogen costs fall rapidly.

BP said March 18 it will consider developing what would become UK's largest blue hydrogen production plant on the northeast coast of England as part of a plan to transform the region into a hub for the low carbon fuel.

The facility, to be built in the industrial hub of Ruwais in the emirate of Abu Dhabi, will have the capacity to produce 1 million mt/year of blue ammonia, ADNOC said in a May 24 statement.

The facility, part of the TA'ZIZ industrial park in Ruwais, is envisaged to start production in 2025. ADNOC didn't disclose the cost of the project. Blue ammonia is made from nitrogen and blue hydrogen, which is produced from fossil fuels, with the CO2 by-product from hydrogen production captured and stored.

UK's Hydrogen Future Could Involve Both Blue and Green Pathways

The UK's hydrogen future could involve a mix of both blue and green production pathways, but it needs to get started or risk falling behind, panelists said March 3.

Neptune Energy is progressing its PosHYdon offshore green hydrogen pilot project in the Dutch North Sea and its DelpHYnus blue hydrogen project in the UK, the company said May 13 in a results statement.

It is one of the biggest use cases for hydrogen and could be a boon for renewable energy demand. But greening ammonia, the chemical primarily used to make fertilizer, will take a lot of heavy lifting.

Ammonia plays an essential role in the agriculture industry as a key plant food, as well as being used in manufacturing and for other purposes. It is produced by combining nitrogen and hydrogen — mostly "gray" hydrogen derived from natural gas — and is responsible for around 2% of all fossil fuel use globally.

But given the European Commission's ambitious strategy to produce "green" hydrogen, made with renewable power using electrolysis, the resulting green ammonia could become a major offtake market for utilities and renewables developers. The UK's National Grid is looking to make the case for blending hydrogen into the natural gas network as it navigates its role in the country's transition to a low-carbon economy.

UK to Move Away From Colors in Hydrogen Strategy

The UK's much anticipated hydrogen strategy will take on a colorless approach when it is released by the middle of this year.

UK Offshore Wind Must Consider How to Integrate Hydrogen