Unicorns: Only in Fairy Tales


Unicorns: Only in Fairy Tales

“A company for carrying on an undertaking of great advantage, but nobody to know what it is”

-Description of company marketed during the South Sea Bubble (1720)

Private companies, particularly those hailing from Silicon Valley and combining just the right mix of buzzwords, have captured both headlines and investor attention.  The media report breathlessly on the increasing herd of “unicorns” – private companies that have managed to achieve valuations of over a billion dollars – while a pursuing pack of venture capital and private equity funds competes to place ever higher valuations on their portfolio companies in advance of their initial public offering (IPO).

However, a post-IPO pop up in pricing is not guaranteed.  The additional price transparency that comes from a public listing can be challenging: earnings must be reported, sceptical market participants can short stocks and thereby act to deflate bubbles, and (perhaps most importantly) the existence of an actual stock price eliminates the ability of venture capital and private equity funds to assign arbitrary valuations to their holdings, at a time of their convenience.

Recently, there have been signs of trouble in tech paradise, with Uber and Lyft’s post-IPO struggles and WeWork’s “failure to launch” highlighting the potential challenge of transferring private valuations onto the public stage.  The S&P U.S. IPO and Spin-Off Index, which measures the performance of U.S. companies worth over $1 billion that have IPO’d or spun-off within the last five years, has underperformed the S&P 500® by 11% over the last 6 months. 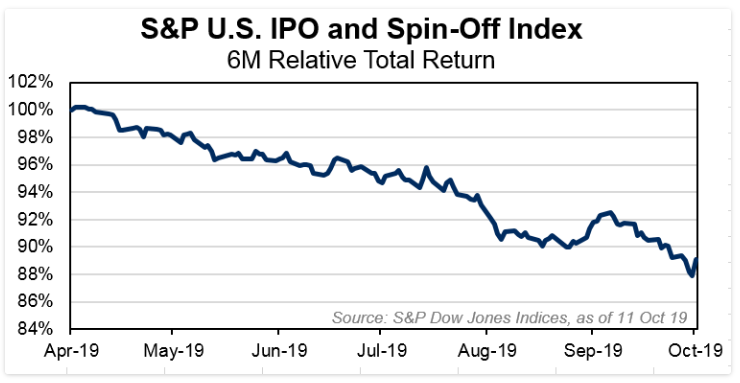 There could be more hard times ahead.  According to Professor Jay Ritter at the University of Florida, last year, 81% of companies to IPO in the U.S. did so with negative 12-month trailing earnings on the day they went public. This was the highest such proportion since the tech bubble days of 2000, up from 76% in 2017 and 67% in 2016.

According to our analysis, this trend has continued in 2019.  80 percent of this year’s IPOs with data available reported negative earnings over the 12 months preceding their launch.  Had not WeWork and Endeavor pulled their IPOs in recent weeks, the figure would have been on track for the highest reading ever. 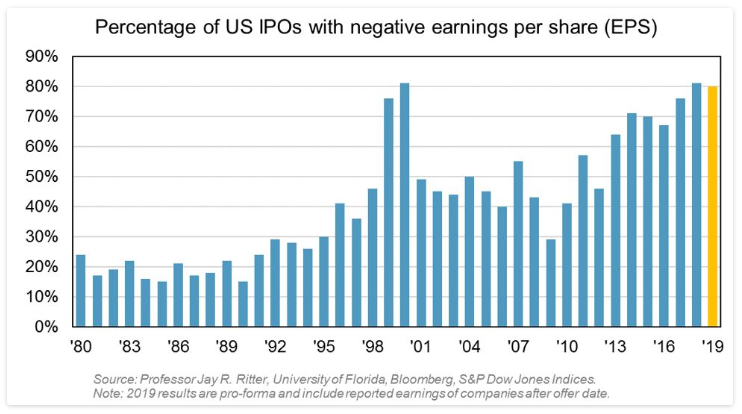 These trends may give investors pause regarding the stellar valuations currently held by pre- IPO companies, particularly those without a clear path to profitability.  The current environment also emphasizes the importance of benchmark construction for ‘market’ indices, some of which place constraints on the additions of newly-listed, or unprofitable companies, and some of which don’t.  Investors tracking the S&P Composite 1500® family of indices, which includes the S&P 500, the S&P MidCap 400® and the S&P SmallCap 600®, may be less exposed: each of these indices requires both a history of positive earnings, and a one year seasoning period (for new listings), before companies become eligible for inclusion.

Sometimes, requiring a demonstrated profit before investing in a company means missing out on the next “big thing”.  However, the problem with unicorns is that they are most often found in fairy tales.