One of the precursors to the European Union was the European Coal and Steel Community, formally established in 1951 to regulate two commodities on a continent ravaged by World War II. Now, war has returned to the European continent, and with it, energy and commodity shortages. The Russian invasion of Ukraine has caused skyrocketing coal, natural gas and oil prices that are likely to persist as many European nations seek to decouple from Russian energy.

Since the Russian invasion began, Western sanctions have affected commodity supplies and continue to cause price volatility. Russian President Vladimir Putin’s Sept. 20 announcement of a partial mobilization of reservists, and of plans to hold referenda on joining Russia in the occupied areas of Ukraine, is likely to make the sanctions harsher, according to Paul Sheldon, chief geopolitical adviser at S&P Global Commodity Insights.

In anticipation of further sanctions, which are set to kick in on Dec. 5, Russia's seaborne oil exports fell 6% in the first half of September, according to S&P Global Commodity Insights. Exports of Russian oil to the EU have fallen to under 1 million barrels per day for the first time. Russia’s allies within the Organization of the Petroleum Exporting Countries, plus its partner countries, have been quick to blame Western governments and sustainable investment for the price volatility.

"When you shame oil and gas investors, dismantle oil- and coal-fired power plants, fail to diversify energy supplies (especially gas), oppose [liquefied natural gas] receiving terminals, and reject nuclear power, your transition plan had better be right," Saudi Aramco CEO Amin Nasser told a conference in Switzerland on Sept. 20. "Instead, as this crisis has shown, the plan was just a chain of sandcastles that waves of reality have washed away, and billions around the world now face the energy access and cost-of-living consequences that are likely to be severe and prolonged."

While the public discourse has focused on the opposition between energy transition and energy security, research by the Energy and Natural Resources team at S&P Global Commodity Insights shows that the supposed opposition between security and transition may be overdetermined. In Europe, investment in clean energy has increased since the war began, driven by a combination of fossil fuel prices and new legislation.

According to the researchers, “preliminary data from our global power and renewables practice show that since the beginning of the Russia-Ukraine war, the world's power generation has become less carbon-intensive and investment in clean energy has accelerated while coal-fired power build has slowed.”

EU member states have been working to reduce dependence on Russian natural gas and to increase imports of liquefied natural gas, particularly since the reduction of flows from Nord Stream 1. Germany's authorities have approved plans for two floating liquefied natural gas terminals to be managed cooperatively by three companies, saying the urgent need for new gas supply outweighs any competitive concerns. Seemingly, an EU that came together to deal with commodity shortages caused by a war is once again responding to commodity shortages caused by a war.

Today is Thursday, September 22, 2022, and here is today’s essential intelligence. 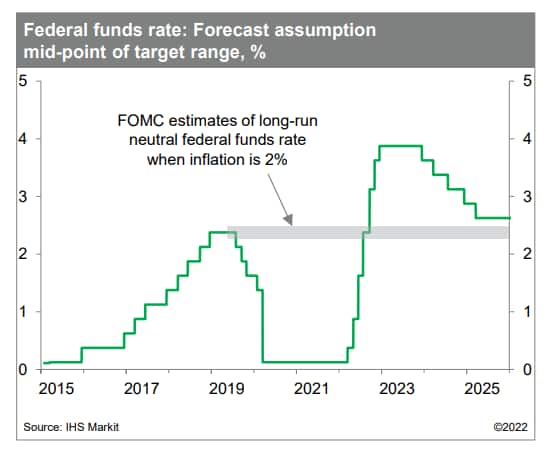 The outlook for U.S. GDP growth remains weak for the third quarter and beyond. S&P Global Market Intelligence lowered its forecast of third-quarter GDP growth to a scant 0.4% (annual rate), largely because new and revised data on retail sales through August suggested lower growth in personal consumption expenditures. Total retail and food services sales rose 0.3% in August. This exceeded consensus expectations and followed a 0.4% decline in July that was revised down from no change. 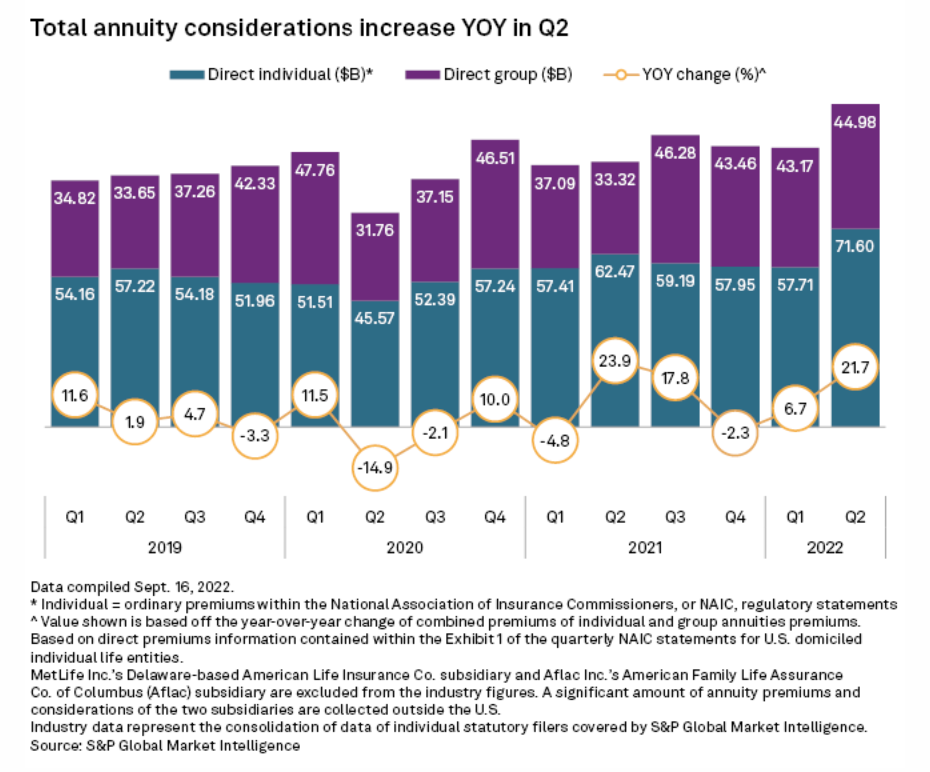 Direct U.S. individual annuity considerations hit an all-time high in the second quarter as several of the top individual underwriters more than doubled their growth rates year over year. The U.S. annuities market booked $116.58 billion in total considerations in the second quarter, up 21.7% from $95.79 billion in the second quarter of 2021, according to an S&P Global Market Intelligence analysis. The surge in annuity growth was sparked by several macroeconomic developments including the Federal Reserve's interest rate policy, which helped stimulate sales of certain types of individual annuities as the life insurance industry's expansion slowed from its prior pandemic-induced highs. 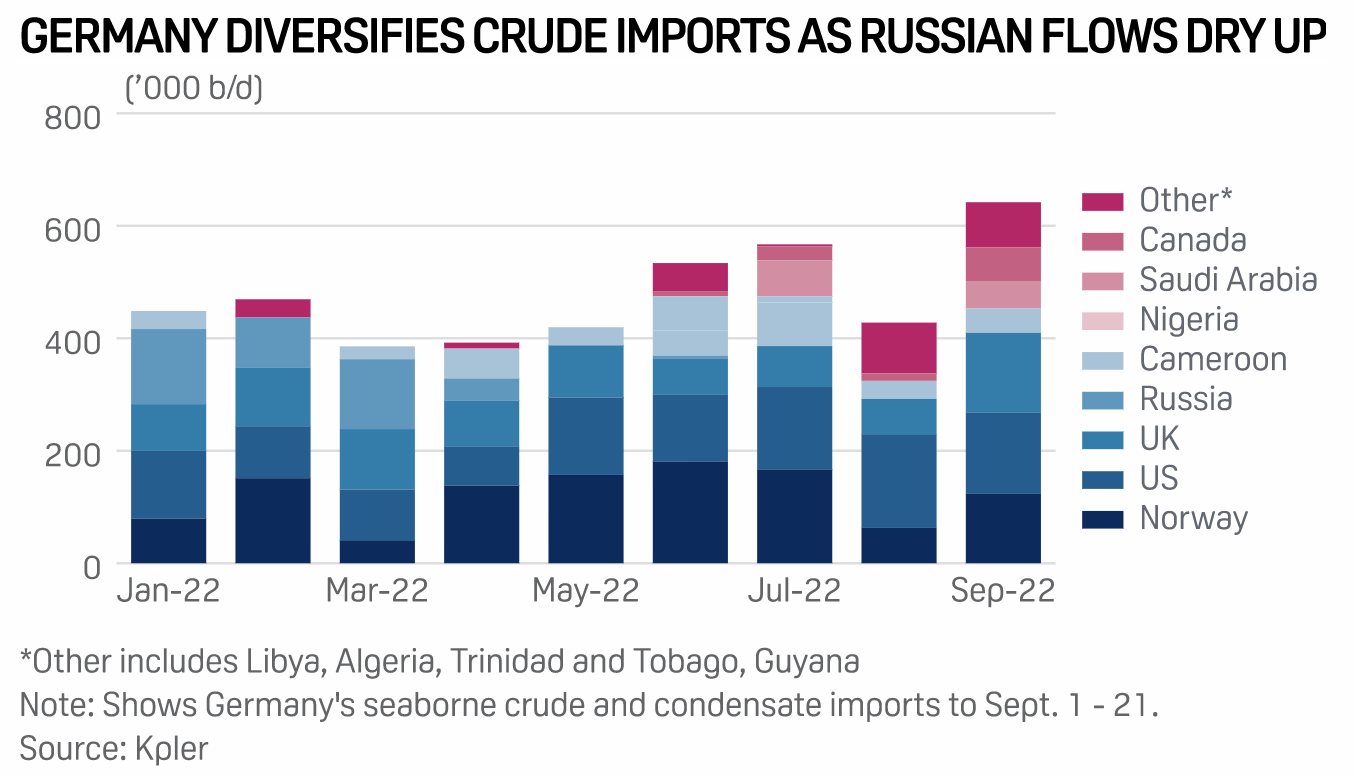 Germany, Europe's biggest oil consumer, has more than doubled its sources of imported crude in recent months, according to shipping data, as its refiners increasingly hunt for alternatives to Russia's medium sour Urals crude in the wake of the Ukraine war. In addition to boosting seaborne crude imports from existing suppliers Norway and the U.S., German refiners have turned to crudes from Canada, Algeria, Saudi Arabia, Cameroon and Libya in recent months as supplies of piped medium sour Russian oil dwindle, according to vessel analytics provider Kpler.

Australia has accelerated its climate ambitions with a new commitment to cut emissions by 43% by 2030, which translates into having about 82% renewable power in its energy mix. Alongside that, the 2019 National Hydrogen Strategy aims to position the country as a top global exporter of the energy carrier. In this episode of the Platts Future Energy podcast, Ruchira Singh discusses the contours of the Australian government's climate policy measures and the considerations around hydrogen for the nation's decarbonization journey with Mendo Kundevski, Ankit Sachan and Anton Ferkov. 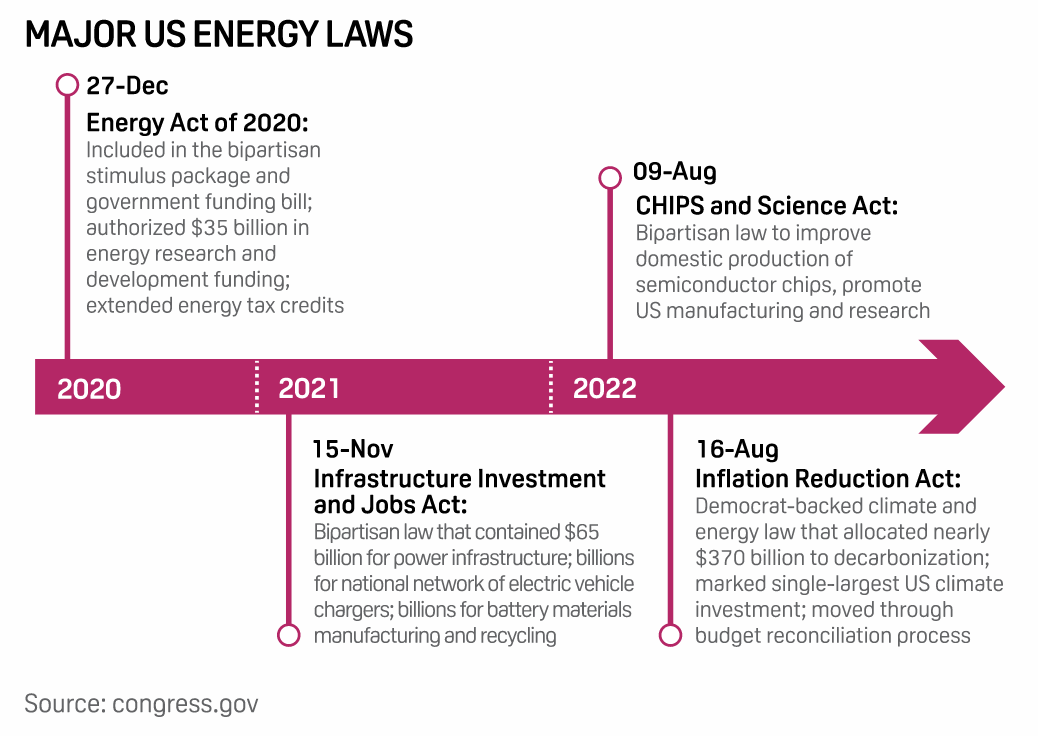 In the wake of a historic U.S. climate law, further federal action to curb planet-warming emissions from the U.S. power sector could largely play out at administrative agencies over the second half of President Joe Biden's first term. With much of the heavy legislative lifting complete, observers anticipate a wave of power-sector regulations from the U.S. Environmental Protection Agency and Federal Energy Regulatory Commission. 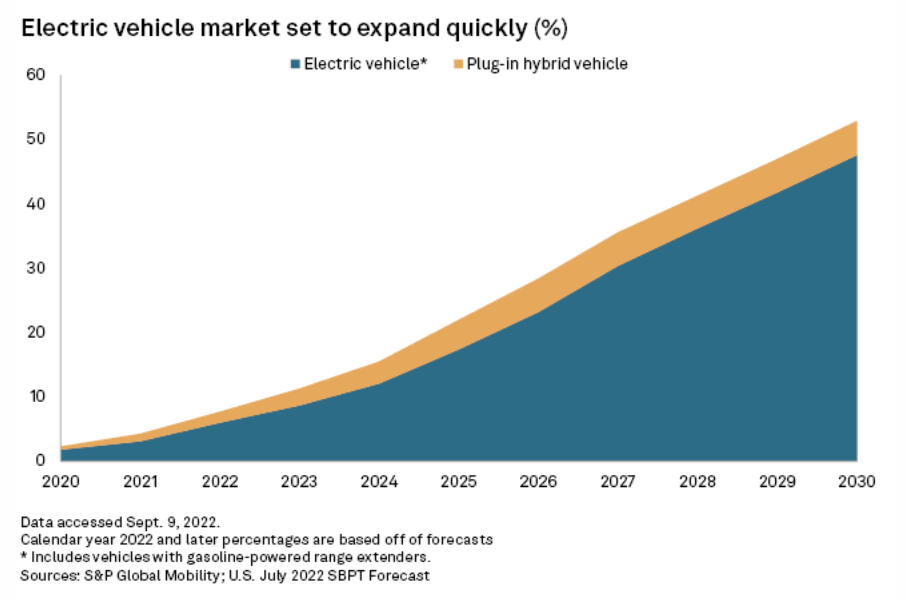 General Motors Co., the largest U.S. carmaker with a 16% market share, is throwing its weight behind President Joe Biden's plan to phase out sales of gasoline-powered vehicles by 2035. To get there, new and stronger federal tailpipe emissions standards should be in place by the fall of 2023 and take effect in 2027, GM said. GM, in a joint statement Sept. 20 with the Environmental Defense Fund, laid out several recommendations for federal regulators to consider as they develop the next round of car emissions standards.