What businesses, investors need to know about the UN’s explosive new climate report


What businesses, investors need to know about the UN’s explosive new climate report

A sobering new report from the U.N.’s Intergovernmental Panel on Climate Change tells corporations and governments in no uncertain terms: Act with urgency to lower emissions and adapt to the impacts of climate change at a more rapid pace and bigger scale. What do companies and investors need to know about the nearly 4,000-page report garnering headlines around the globe? We outline three key takeaways below.

The world has already reached a tipping point in some aspects of climate change, but urgent and large-scale action can still help mitigate the worst impacts. At S&P Global Sustainable1, we expect the latest IPCC report could prompt more serious discussions around climate heading into COP26, and motivate corporations to up their commitment to adaptation in the face of serious, near-term climate risks.

One of the key findings of the report is that the world could reach 1.5 degrees in the early 2030s under all emissions scenarios. That’s about 10 years sooner than previously projected. This means that the impacts of climate change will also worsen at a faster pace.

But even under a net zero scenario, global warming could reach as high as 1.7 degrees relative to pre-industrial times by 2040. Although the world might in the interim overshoot the 1.5-degree goal even while pursuing net zero emissions, temperatures could later drop again as global output of emissions starts to decline in pursuit of that target.

In comparison, a worst-case, high-emissions scenario would most likely result in warming of 2.4 degrees from 2041 through 2060, and global warming would continue to climb to 4.4 degrees by the end of this century relative to pre-industrial levels.

These differences in temperatures make a big difference in how much damage occurs to the planet.

S&P Global Trucost analyzed the physical risks linked to climate change that most of the world’s companies face. The analysis used market cap-weighted average physical risk scores across seven risk indicators under low, moderate and high emissions scenarios in 2050, including data from 15,000 public companies, representing about 95% of global market capitalization.

The analysis under the high scenario shows that on average companies are most exposed to water stress, with a score of 60, followed by heat waves, cold waves and wildfires, respectively. 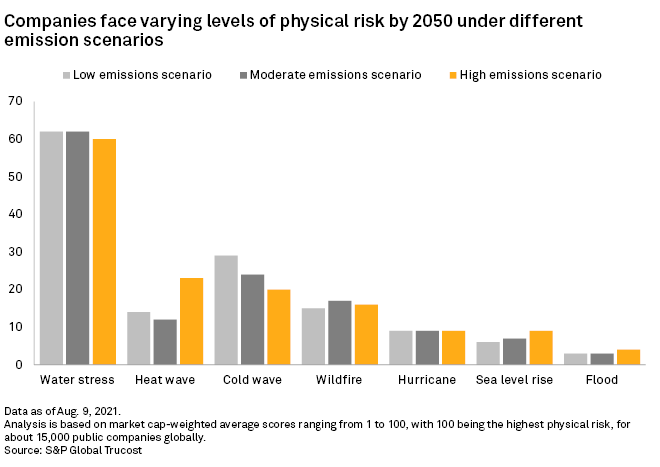 Even small increases in annual global temperatures can make a huge difference in the impact of climate change, the IPCC report said.

“With every additional increment of global warming, changes in extremes continue to become larger,” the IPCC wrote in the report’s summary for policymakers. For example, only half a degree of warming causes “clearly discernable” increases in the intensity and frequency of hot extremes such as heat waves, heavy precipitation and agricultural and ecological droughts, the report said.

The IPCC also found that compound events — that’s when two or more climate impacts such as heat waves and droughts occur at the same time — are becoming more frequent as global warming increases.

Scientists in this report were also able to better connect human-caused emissions — primarily due to the burning of fossil fuels — to specific climate and weather extremes such as heat waves, heavy precipitation that leads to flooding, droughts, and tropical cyclones.

Climate change-exacerbated events can prove costly. For example, the U.S. experienced 22 extreme weather-related disasters that collectively caused at least $95 billion in damages during 2020, according to the National Oceanic and Atmospheric Administration. 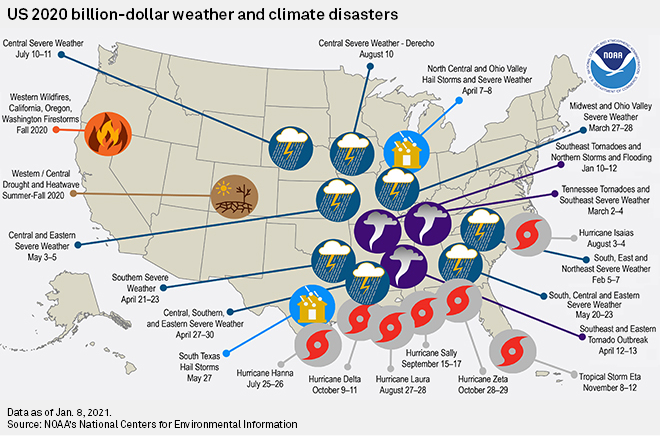 Among other things, the IPCC report said that change in the number of major category 3-5 tropical cyclones is likely linked to climate change. The report also noted that climate change is causing tropical cyclones to produce more rain than in the past, which can lead to catastrophic flooding of the kind seen in Texas in 2017 due to Hurricane Harvey.

The IPCC findings should prompt businesses and investors to reassess how these projected changes to climate might affect their operations and government policies. While the report continues to frame net zero as an important goal, it also makes clear that action needs to be taken immediately to slow the pace of climate change.

Where government efforts fall short, S&P Global Sustainable1 sees opportunity for the private sector to step up. Pricing transparency in the voluntary carbon market is a critical prerequisite to help channel investment into projects that can make a difference, including projects that can permanently capture and sequester carbon from the atmosphere. Most recently, Platts has been assessing the value of carbon offsets associated with carbon capture projects at upwards of $100 — with such projects providing a key potential tool for facilitating net zero or even net negative efforts.

2. The world is at or near the tipping point for certain climate impacts such as sea level rise and ocean acidification.

In past reports, the IPCC has shied away from saying the world is past the tipping point for stopping certain cascading impacts. That has changed in the latest report, which says the best the world can hope for in some circumstances is to slow the pace of those changes.

Impacts that could worsen for decades or even thousands of years include ocean acidification, warming ocean temperatures, Arctic ice melt and sea level rise.

And as sea levels rise, coastal flooding in low-lying areas and coastal erosion will increase. “Events that occurred once per century in the recent past are projected to occur at least annually at more than half of all tide gauge locations by 2100,” the report said.

In fact, even using technology to withdraw greenhouse gases from the atmosphere may not be enough.

“If global net negative CO2 emissions were to be achieved and be sustained, the global CO2-induced surface temperature increase would be gradually reversed but other climate changes would continue in their current direction for decades to millennia,” the report found.

“For instance, it would take several centuries to millennia for global mean sea level to reverse course even under large net-negative CO2 emissions.”

The IPCC’s new findings that the world is past the tipping point on some impacts should prompt companies and investors to speed up plans to lower emissions and also to look for climate assessment tools to better understand how changes to the ocean and sea levels might affect their operations, physical assets and investment portfolios.

3. We need a greater emphasis on regional impacts and adaptation

The fact that certain impacts such as coastal flooding tied to sea level rise will continue in the foreseeable future led the scientists behind the latest report to put a greater emphasis on helping the world understand regional impacts and the need for adaptation. Additional details on adaptation strategies are expected in subsequent reports.

The impacts of climate change will not be isolated to a few regions or countries. “With further global warming, every region is projected to increasingly experience concurrent and multiple changes in climatic impact-drivers," the report noted.

The report therefore includes regional fact sheets and data sets that range from continent-scale to geographic features such as mountains, oceans and urban areas. The IPCC also created an interactive online Atlas that shows the different scenarios and regional impacts as well as an accompanying set of downloadable data to enable further tailored analysis.

The IPCC outlines various physical risks that climate change poses. Some parts of the world will face increased precipitation, while regions that rely on storm patterns like monsoons may see total rainfall decrease — see the following chart from the IPCC report. Increased precipitation can equal flooding and other issues, while decreased rainfall can cause droughts that affect the supply chain and broader economy. In other words, these changes can have serious knock-on effects for businesses.

The IPCC’s tools can help businesses, investors and regulators use data about their specific circumstances to understand how climate change can impact them directly — for example, in the form of physical risks to their office buildings and other physical infrastructure, employee health, and broader economic drivers.

Going forward, companies should expect renewed questions from investors and regulators on how they are using the information available from the scientific community to plan for and adapt to these impacts.

What you need to know about IPCC reports

The IPCC releases reports every few years (this one was delayed by the COVID-19 pandemic) that synthesize recent scientific findings to help policymakers and businesses understand and act on the challenges of climate change.

These reports pack a punch. For instance, the IPCC’s interim climate assessment in 2018 shaped policy discussions and investor expectations around the world over the past few years. It was that interim report that made mainstream the idea that the world needs to achieve net zero emissions by 2050 to limit global warming to 1.5 degrees C relative to pre-industrial levels. That prompted many companies to set net zero targets amid growing investor pressure. For example, 23 of the 30 largest power utilities in the U.S. have now set net zero targets, S&P Global Market Intelligence reported in June.

Why the timing of this one matters

The timing of this latest report is important as it comes less than 90 days before the November COP26 gathering of parties to the Paris accord in Glasgow, an important event on the global sustainability calendar.

Authors of the report in a press briefing indicated they hope their findings will prompt governments and policymakers to raise their ambition on tackling climate change ahead of COP26. At present, government pledges fall far short of the action necessary to achieve the Paris agreement goal of limiting global warming to 2 degrees C relative to pre-industrial levels.

The IPCC’s nearly 4,000-page report by its Working Group I was one of several expected to be published under the IPCC’s sixth climate assessment cycle, which the IPCC is slated to finalize by the end of September 2022. The findings of this first report were based on more than 14,000 peer-reviewed scientific papers and went through an extensive consultation period regarding the physical science of climate change. Future reports will focus in more detail on adaptation and mitigation options, impacts to biodiversity, regional analysis, and innovation and technology.

Compared to the fifth climate assessment cycle that concluded in 2014, the new IPCC report more directly connects human-induced emissions to extreme weather and climatic events, provides more regional details on climate impacts, and notes the world may be at or past the tipping point on certain effects of climate change that are likely to continue for thousands of years.