The ongoing energy crisis is challenging the design of many power markets globally.

The Power Sector's Policy Responses to the Global Energy Crisis 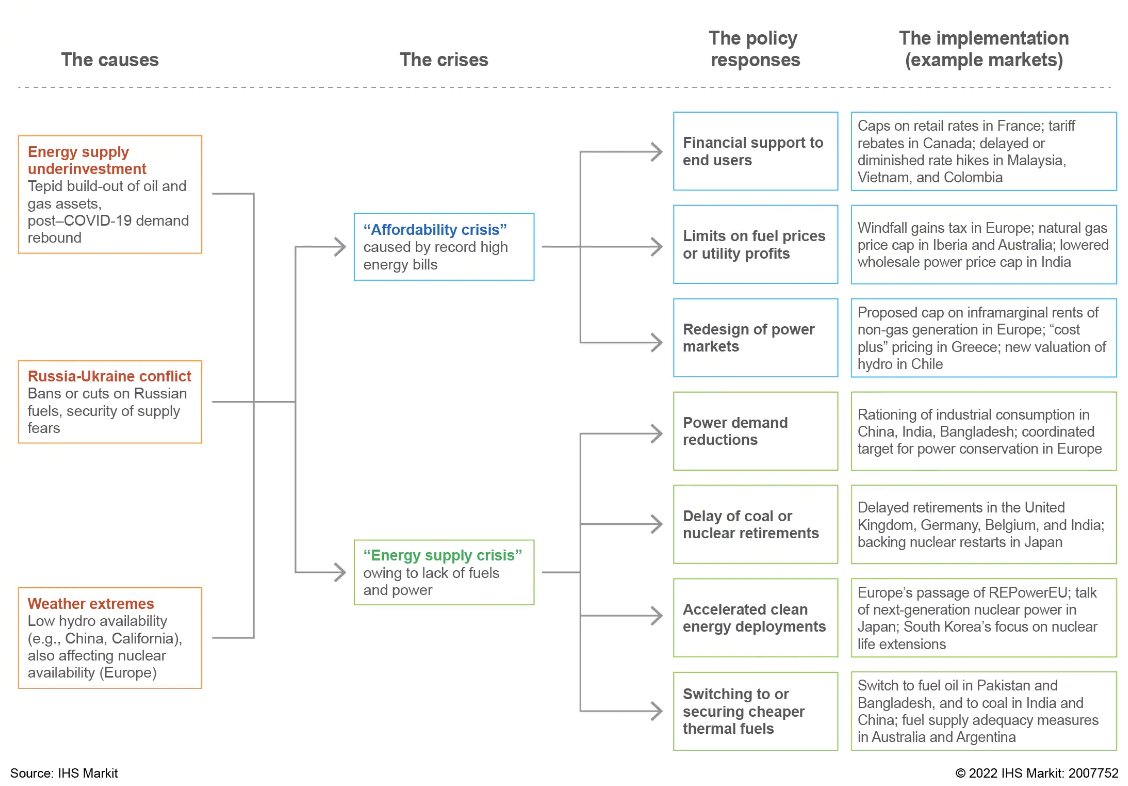 The Glasgow Financial Alliance for Net Zero has urged G-20 governments to provide greater clarity on how response measures to the unfolding energy crisis are impacting the energy transition. The alliance also wants better guidance on how nations intend to get "back on track" in terms of their climate commitments.

The North Atlantic Treaty Organization on Sept. 29 vowed a "united and determined" response in the event of deliberate attacks on critical energy infrastructure, describing recent damage to the Nord Stream gas pipelines in the Baltic Sea as deliberate acts of sabotage and a risk to shipping that also entailed substantial environmental damage.

In a complicated world where one event triggers challenges for seemingly unrelated industries, the S&P Global network of over 750 global experts can provide you a 360-degree view of key trends. Get in-depth insights into the intersection of topics such as economics, shipping, automotive, commodities trading, oil and gas, financials, sustainability and more.

EU Caps Power Trading Revenues – But What Is The Impact?

Europe's energy crisis has been in the headlines for most of 2022. Owing to the gas supply crisis, worsened by low nuclear availability, European power users face exceptionally high power bills this winter.

Forward And Day-Ahead Prices in Germany

More than half of Europe's major banks expect the current energy crisis to negatively impact their short-term ability to stay on track with their climate transition agenda, according to new research.

The ‘A’ Factor: The Role of Algorithmic Trading During an Energy Crisis

Algorithmic trading is becoming increasingly common in European natural gas and electricity markets, with traders often blaming the innovation for extreme volatility, as regional prices have been swinging this year on the back of tight supply and accelerating uncertainty.

Do you need to understand the market value of LNG in regional and global markets? What is the value of freight rates and shipping costs between export and import locations? Or how supply and demand fundamentals are impacting the price of LNG? S&P Global Platts delivers the data and prices you need to make competitive decisions.

Asian spot LNG prices for the summer of 2022 are at their highest level for this time of the year. The Platts JKM for August was assessed at $36.888/MMBtu June 24, S&P Global Commodity Insights data showed.

European gas fundamentals are still largely dictating global spot LNG prices and as LNG continues to replace piped gas supply into the region, Asia will lose LNG cargoes to Europe and see lower inflows for the rest of this year compared to previous years. 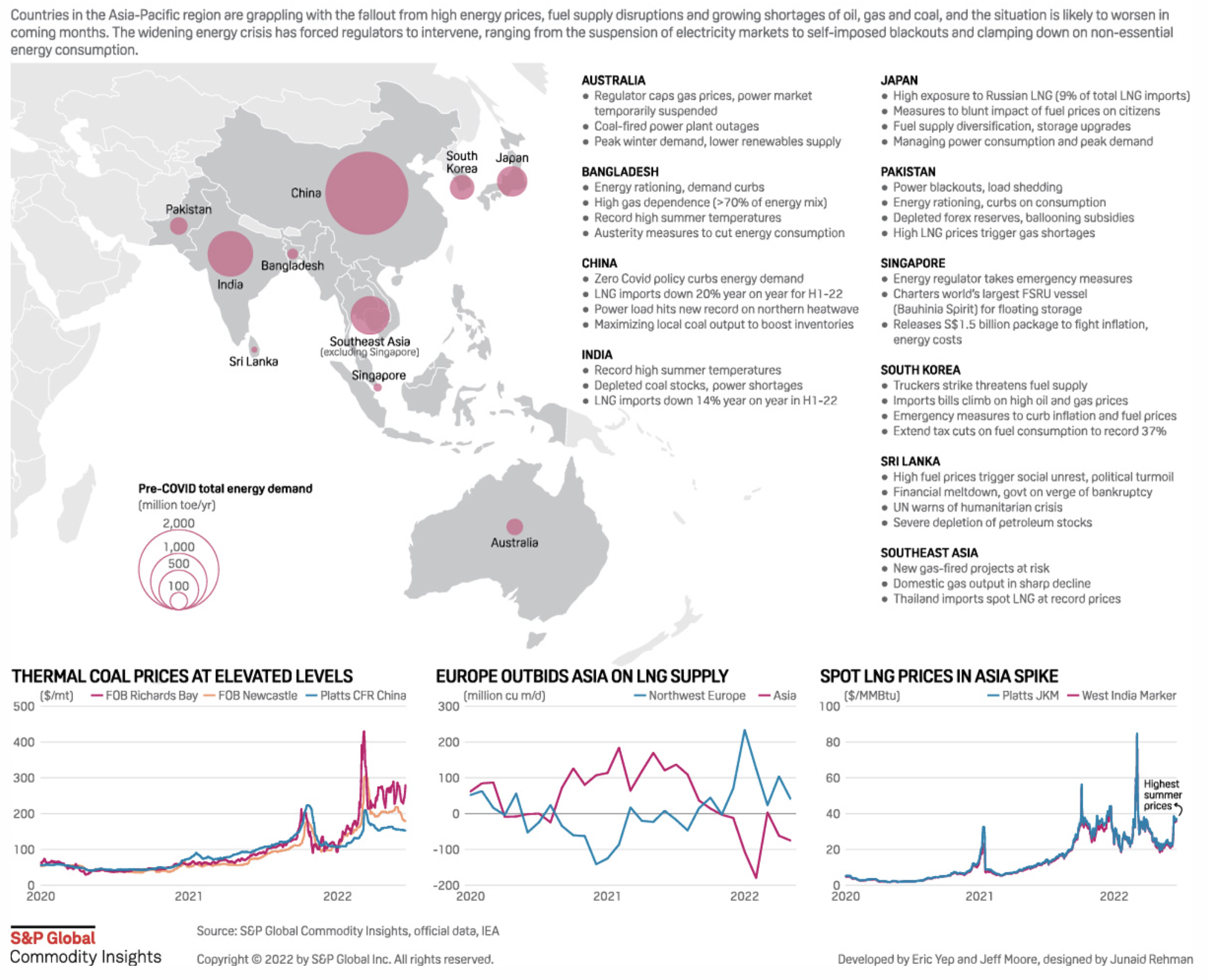 Bangladesh is expected to see a huge ramp up in coal-fired power generation in coming months as new capacity comes online, which will boost the share of coal in its energy mix to its highest on record.

Severe floods in Pakistan, triggered by record monsoons and a glacial melt in the mountainous north, have endangered grid stations and exacerbated power shortages at a time when the country is already grappling with an acute energy crisis and limited LNG supplies.

VLCC freight rates for hauling crude from the Middle East to North Asia neared a two-year high Aug. 29 on the back of burgeoning oil demand and following altered trade flows which began with the Russia-Ukraine war.

U.S. coal exports rose in the second quarter as demand and prices remained elevated amid a global energy crisis.

The global coal market has become tight as several countries shunned supplies from Russia following its Feb. 24 invasion of Ukraine. High natural gas prices and the lack of new project investments have also pushed up coal prices. However, rail transportation constraints, weakening demand in China and fears of a global recession pose risks to the sector.

Asia and Europe received the most coal shipments from the five largest ports in the U.S.: Norfolk, Va.; Baltimore; New Orleans; Mobile, Ala.; and Seattle. Other destinations for U.S. coal exports included South America and Africa. All coal shipped through Seattle during the second quarter went to Asia. 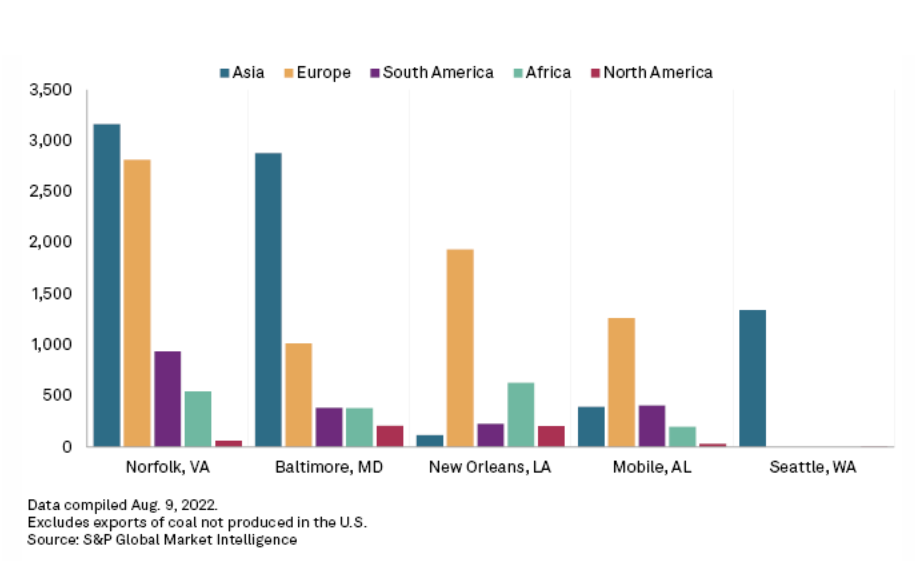 OPEC+ Chops Oil Quotas, in Another Snub to the U.S., as White House Threatens Retaliation

OPEC and its allies on Oct. 5 slashed their production quotas by 2 million b/d for the next 14 months in a bid to stabilize sliding oil prices, provoking a strong backlash from the U.S., which had warned the group to avoid a potential supply squeeze and distance itself from Russia.

Argentina said Aug. 8 it has authorized Cammesa, operator of the wholesale power network, to increase the amount of diesel supplies it can import under a tax-free scheme this year to 25.2 million barrels from 15.7 million barrels as diesel demand for electricity generation grows faster than previously expected.

A Summer Gas Supply Crisis in Europe, Made in Russia

Citing technical faults, safety concerns, and sanctions, Russia's technical regulator reduced the operational capacity of the Nord Stream pipeline by 60% on 16 June. This has reduced pipeline deliveries of Russian gas to the EU by about 35% to unprecedented low levels.

Saying what many were thinking, German minister of economy and climate Robert Habeck has called the technical issues "a pretext" and accused Russia of seeking to drive up prices and destabilize the gas market.

Talk to the Expert