A Community Bank Shares its "Going Green" Story with Stakeholders

The Essential Podcast, Episode 37: Happy Birthday to The Dow — 125 Years of the DJIA

This article is reprinted from Panjiva, part of S&P Global Market Intelligence.

The signing of the Regional Comprehensive Economic Partnership (RCEP) trade deal by 15 countries creates the largest managed trade area in the world, following eight years of negotiations. As discussed in Panjiva’s research of Oct. 2 the deal represents a China-led attempt to define the rules of trade in Asia. It remains to be seen whether President-elect Biden will rejoin the CPTPP to attempt to provide a counterweight.

The agreement will cut tariffs on around 90% of product lines over a one to 20 year period and also brings into place a wide-range of IP and digital trade rules, though it is not as complete as other trade deals such as CPTPP. RCEP will only come into force once it has been ratified by its member states which include the ASEAN bloc, China, Japan, South Korea, Australia and New Zealand.

Panjiva’s data shows total exports within the bloc reached $3.14 trillion in 2018, led by China with $1.34 trillion (including Hong Kong and Macau) followed by Japan and South Korea with $366 billion and $350 billion of trade respectively.

At the product line the largest intra-group product line traded was semiconductors worth $430.6 billion, followed by telecoms equipment worth $187 billion and refined oil products with a value of $131 billion.

A key incentive for the developing Asian countries to enter the group is to be able to access the largest markets on a reduced-tariff basis. That may be particularly useful for Indonesia whose RCEP exports as a proportion of GDP were the third lowest of the group at 9.3% with only China and Japan being lower. 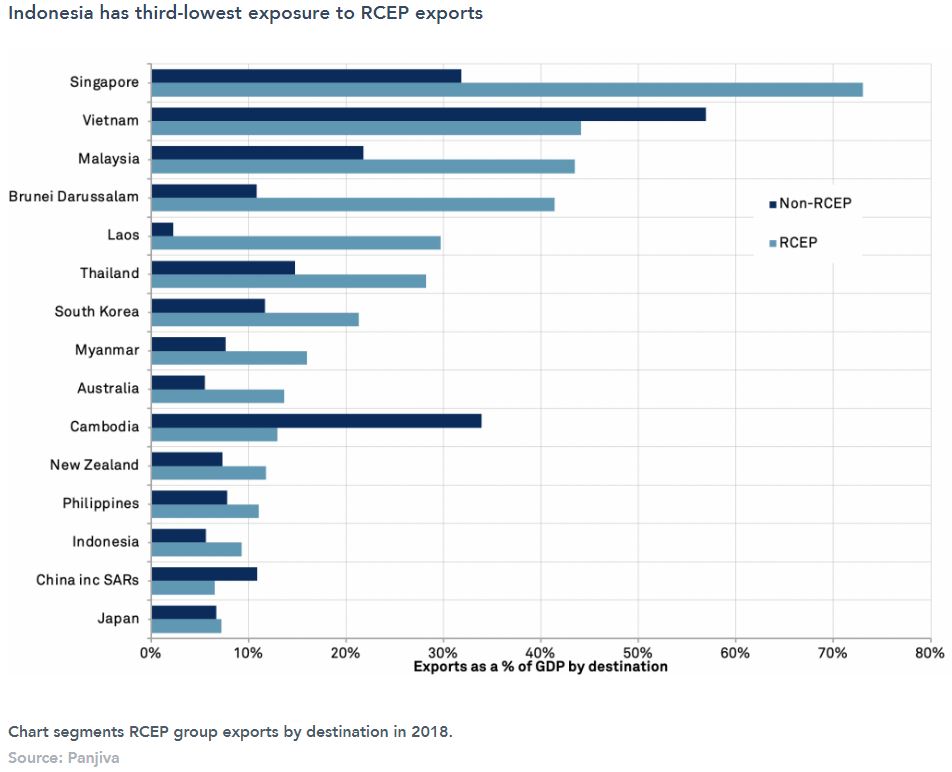 A key area of under representation for Indonesia in its exports to the RCEP group versus the rest of the world is in apparel and footwear. Together the categories are equivalent to 13.9% of Indonesia’s exports to the rest of the world but only 3.1% of shipments within the RCEP group. One challenge for growth will come from many of the other RCEP countries also being keen exporters of apparel. A similar issue may apply in furniture, which accounted for 2.4% of exports outside of RCEP but only 0.4% of intra-RCEP trade.

Within commodities Indonesia’s palm oil exports to the rest of the world represented 16.2% of all exports but only 6.5% of RCEP exports. Similar issues will likely apply for rubber and coffee. Taking advantage of RCEP will therefore require the Indonesian government to find ways to build relative competitive advantage in its largest export areas.

On the flip side, Indonesia “over-exports” energy and mineral ores to RCEP versus the rest of the world. One area where defensive action may be needed is autos, which represented 5.7% of exports to the RCEP group but only 3.7% globally. 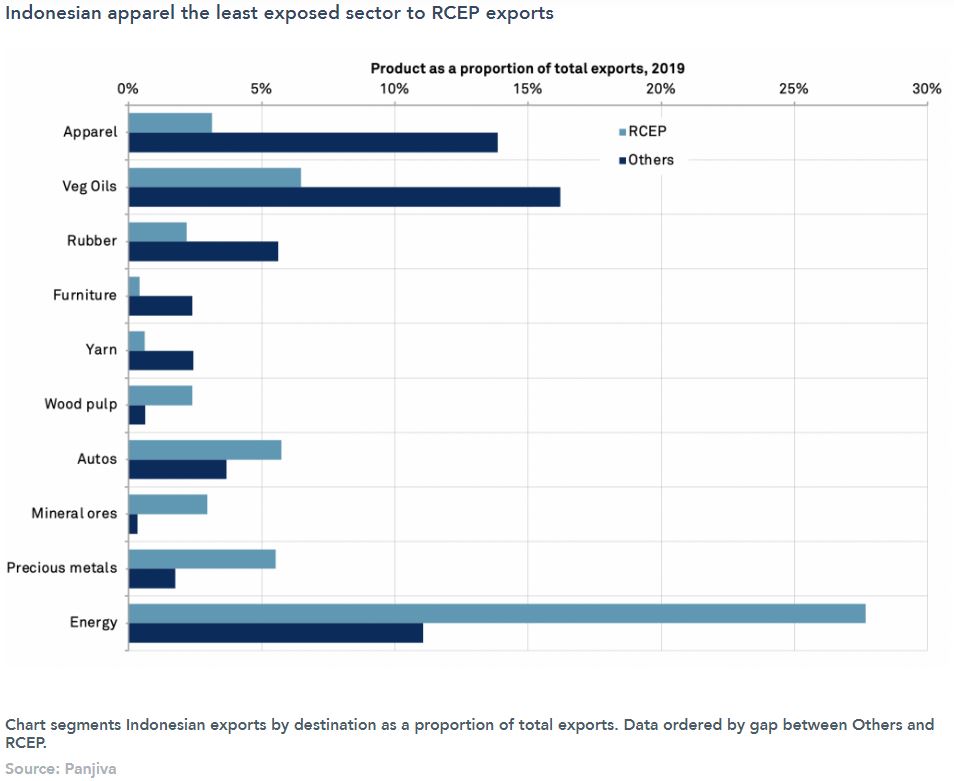 Panjiva’s data shows that the largest exporters of apparel and footwear to the RCEP group account for no more than 6.1% of the total, making for a fragmented competitor group. The industry is also only steadily recovering from disruptions from the pandemic.

Indonesia’s apparel exports to the RCEP group dropped by 21.9% year over year in the three months to July 31, led by a 39.6% drop in shipments by privately-owned Parkland World while Pan Brothers declined by 19.3%. Others have recovered more quickly, with shipments linked to Pou Chen having improved by 2.1% after a 36.8% surge in June. 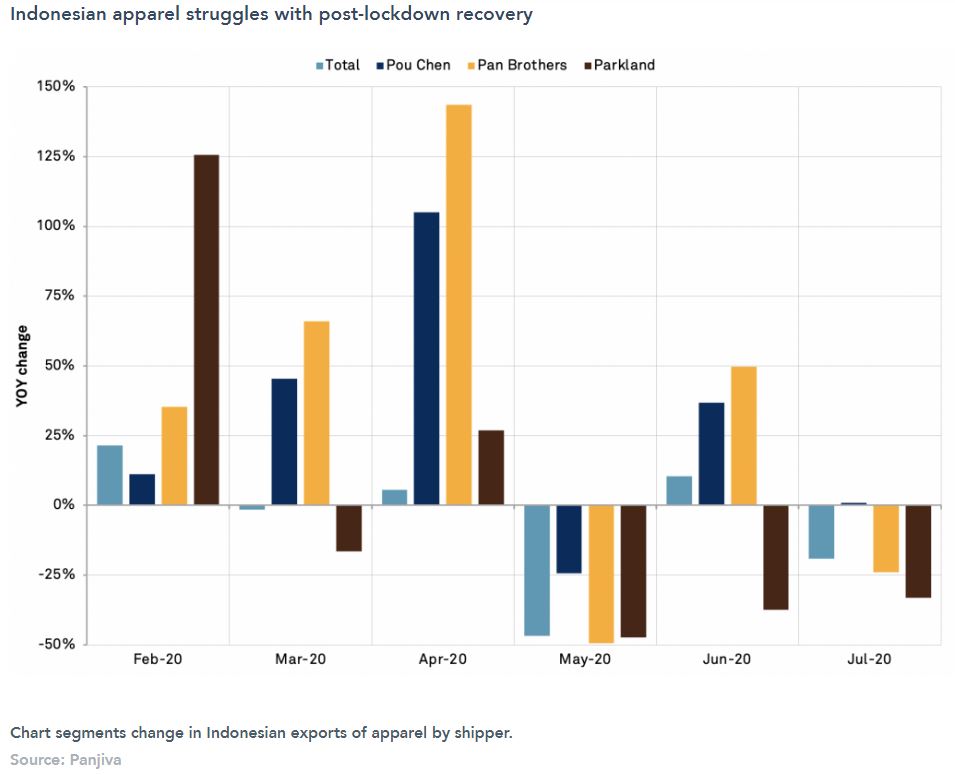