The U.N.’s latest Intergovernmental Panel on Climate Change report warned that the world may warm by 1.5 degrees in the early 2030s under all emissions scenarios, marking an acceleration of 10 years sooner than previously projected. In order to keep global warming within 2 degrees—the maximum amount that scientists believe that atmospheric temperatures can rise before conditions become irreversible at best and uninhabitable at worst—the international community would need to dramatically cut annual fossil-fuel-related emissions across multiple sectors by 2025 relative to 2019 levels, no matter the scenario, according to S&P Global Sustainable1 research.

In the immediate term, companies and communities have experienced devastating weather and other climate events that are only expected to worsen in the coming three decades. Utilities face the greatest threats to physical assets from climate-related events like wildfires, storms, and water stress now and in the future.

Globally, water stress will likely emerge as the most pressing climate risk to corporate assets, particularly for utilities and materials sectors, by 2050, according to S&P Global Sustainable1. In those 30  years, many areas across Europe and the most highly populated U.S. counties are expected to confront water stress as their biggest climate risk.

"Physical climate risk really is everywhere," Christopher Schwalm, a risk program director and senior scientist at the U.S.-based think tank Woodwell Climate Research Center, which works with companies on ascertaining their climate risk, told S&P Global Market Intelligence. "That hasn't quite achieved the level of resonance it ought to have in the broader corporate world.”

Major carbon emitters, like the U.S., would need to take overwhelming action to reduce their carbon emissions within the next three years. The global energy mix would need to prioritize renewables, with generation from wind and solar increasing by 133% and 98%, respectively, from 2019 levels by 2025, according to S&P Global Sustainable1’s analysis of S&P Global Platts Analytics’ Future Energy Outlooks.

“Companies would have to make proactive changes on the path to net zero now. They would need to create realistic plans to transition to a low-carbon world,” S&P Global Sustainable1 said in the recent research. “And crucially, those transition pathways would need to include near-term milestones. The path to 2050 won’t be attainable without credible signposts in the next few years.”

Today is Tuesday, September 28, 2021, and here is today’s essential intelligence. 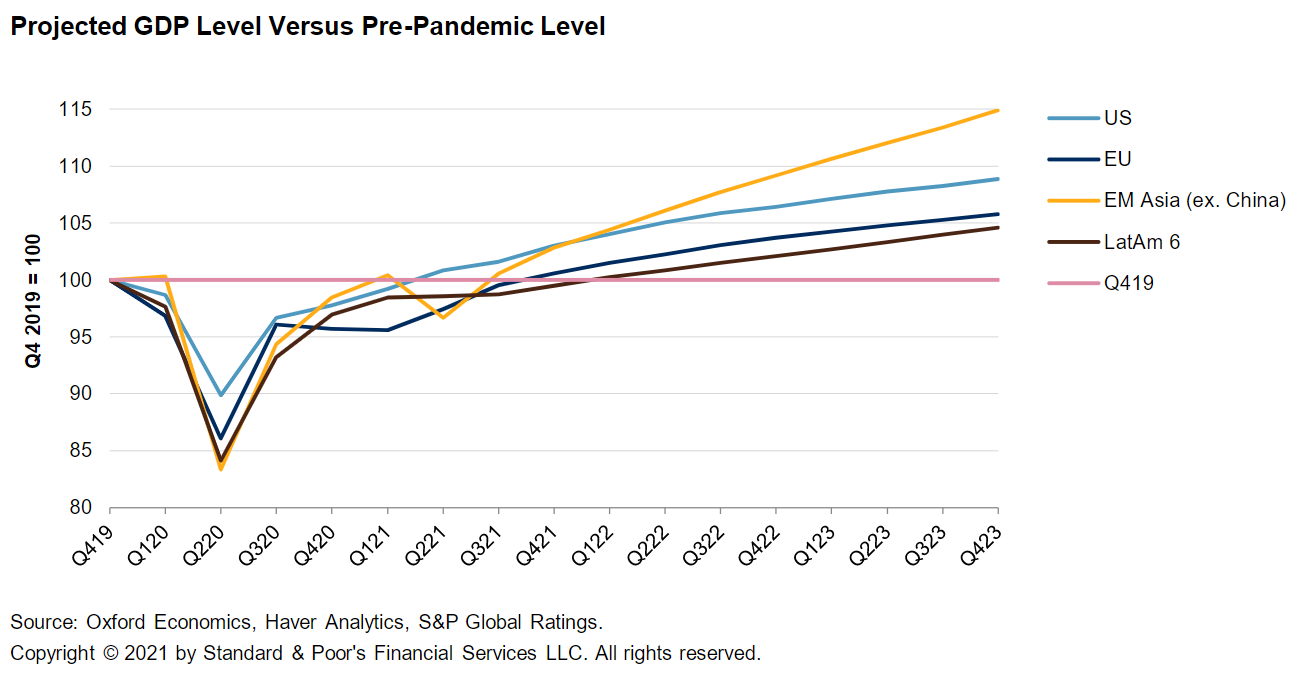 While COVID-19 is far from over, its impact on GDP in Latin America is falling. Lockdowns are less of a drag on growth, and reopening provides less of a boost. Most of the sectors that are operating significantly below capacity, and will benefit from further progress in vaccination, are relatively small as a share of GDP.

Domestic travel numbers reached 85% of the 2019 level in July this year across the Americas and Asia, but international traffic only 26%, according to the International Air Transport Association (IATA), signaling an uneven and protracted recovery of global air traffic.

According to S&P Leveraged Commentary & Data (LCD), a total of 15 new issue middle-market (MM) collateralized loan obligations (CLOs) have closed in 2021 year to date, while another 17 have experienced either a refinancing or a reset. 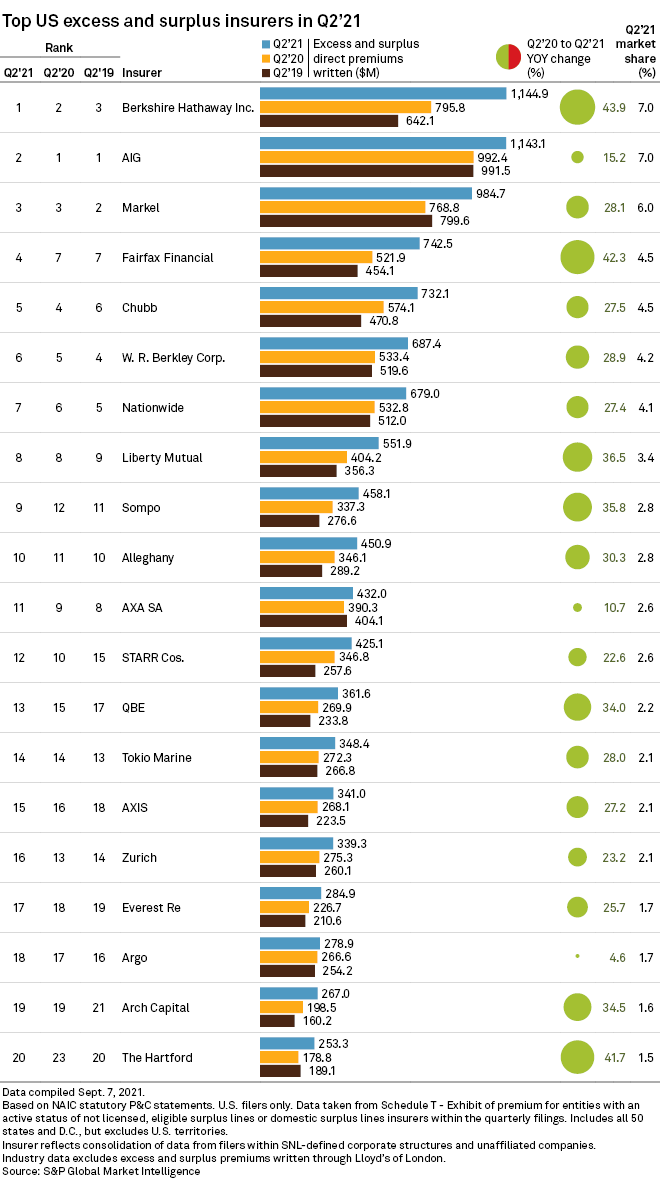 Berkshire Hathaway Inc. and American International Group Inc. controlled very similar shares of the U.S. excess and surplus market during the second quarter of 2021, a period that saw growth of the segment overall continue strongly. 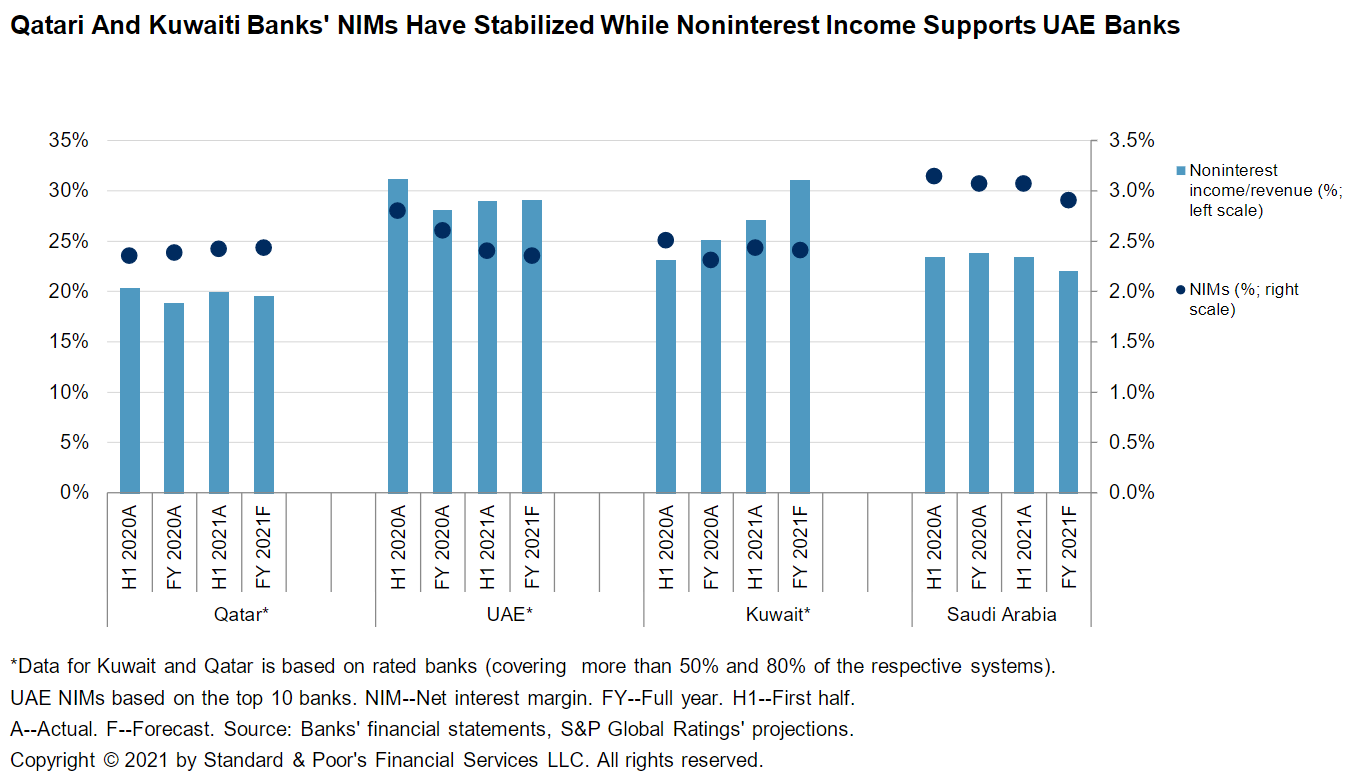 UAE banks are among the most vulnerable in the GCC region, as a result of their high exposure to real estate and other hard-hit sectors, while Saudi banks are better placed thanks to stronger profitability.

Germany's large banks are among the least efficient in Europe, data from S&P Global Market Intelligence shows. In a sample of the continent's 50 largest banks by assets, the four with the highest cost-to-income ratios at the end of the second quarter included three German lenders.

India's new government-backed bad bank can help lenders recover capital from nonperforming assets if it can ensure a timely resolution and attract a pool of professionals who are allowed to work independently, analysts said. 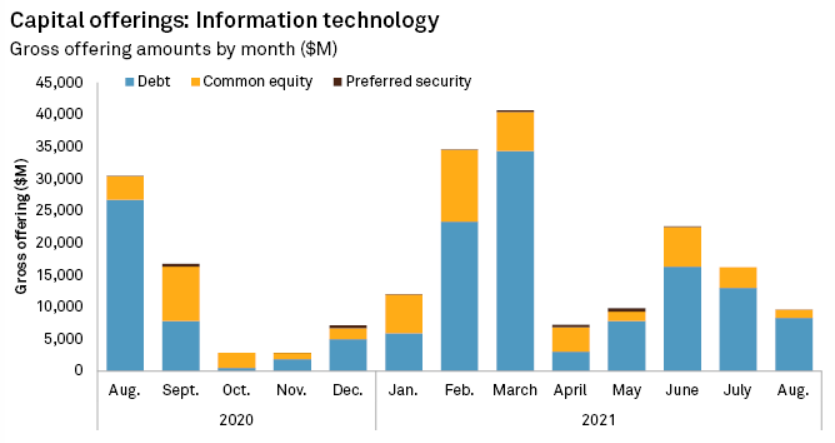 Publicly traded information technology companies in the U.S., Canada and Bermuda raised about $9.58 billion through capital offerings in August, marking the second-lowest total for 2021.

After a quiet July, Capital market activity in publicly traded telecommunications companies in the U.S., Canada and Bermuda bounced back in August, raising about $5.97 billion.

After raising just $1.72 billion through capital offerings in July, capital markets activity in the media sector rebounded strongly with about $18.06 billion in August, the sector's highest total for 2021. 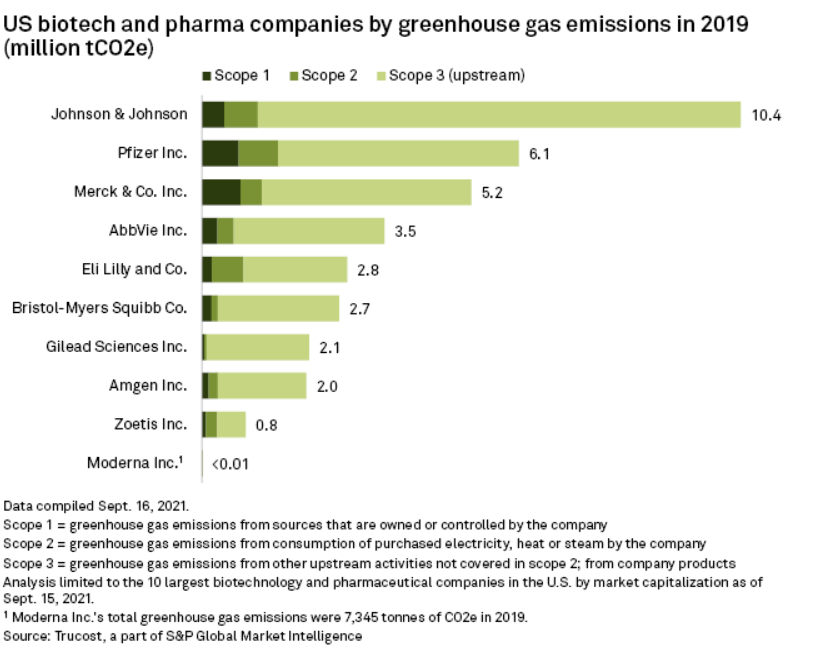 The largest U.S. drugmakers have all committed to reducing greenhouse gas emissions in the near term as a global economic forum drew attention back to the sector's growing carbon footprint.

The future of wood biomass fuel for electricity generation in the United States balances on a knife-edge awaiting federal and state policy to determine if it more broadly qualifies as clean energy, experts and executives said.

Feature: No Common Path On Forward Pricing Of Voluntary Carbon Credits In OTC Market Yet

A common approach for putting a price on voluntary carbon credits for forward delivery has yet to emerge in the broader over the counter market although some patterns seem to appear for some specific types, market participants told S&P Global Platts.

Qatar can utilize being a planned economy to gain the first-mover advantage over Australia in the emerging market for hydrogen and hydrogen-derived energy products, Peter Coleman, former CEO of Australia's largest oil and gas independent company Woodside Petroleum, said Sept. 27 at APPEC 2021.

Global oil demand will still be significant for years, even under the most ambitious energy transition. So which basins will continue to produce, and which others will be abandoned? 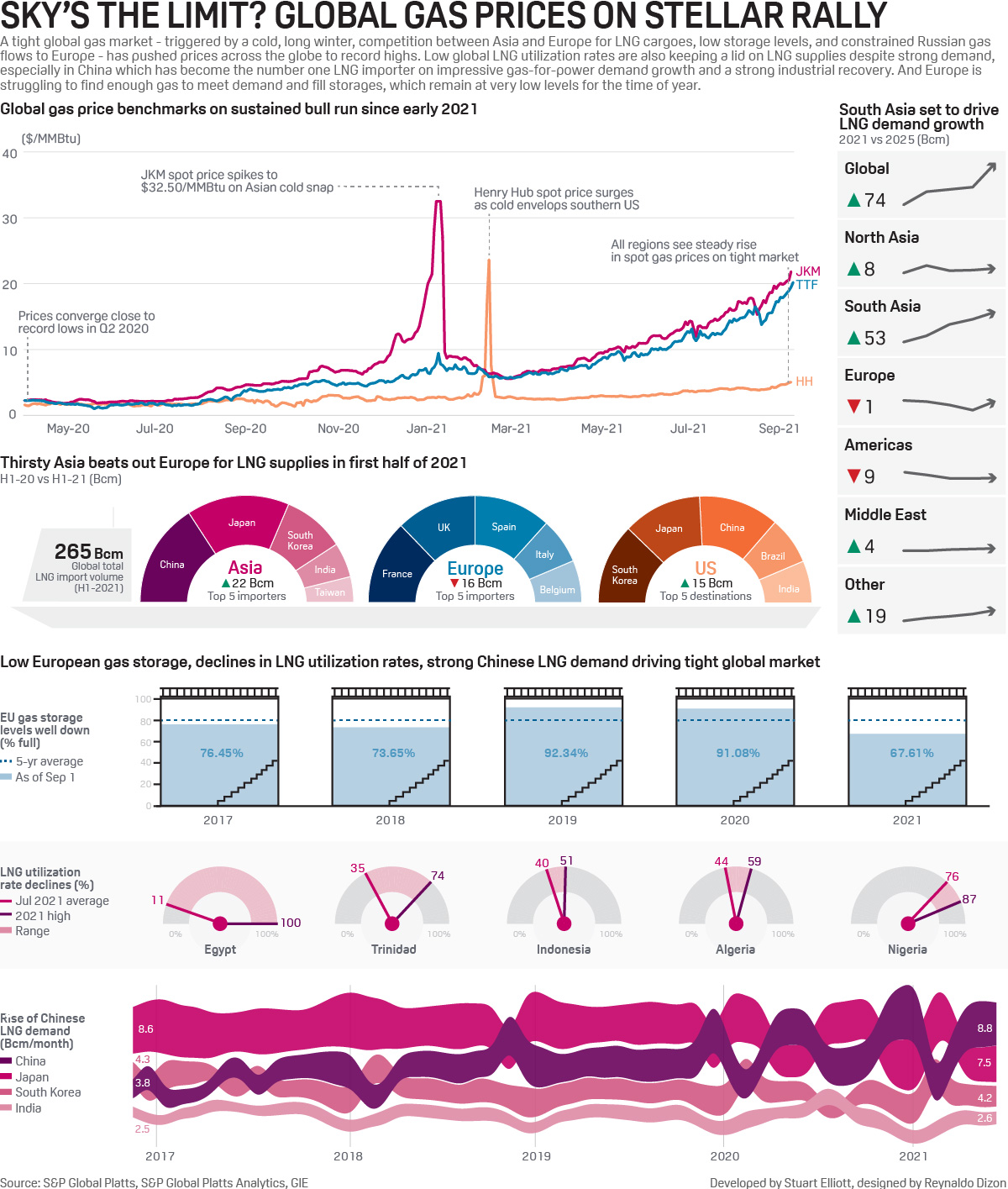 U.K. refiners and fuel retailers were struggling to restock fuel stations on Sept. 27 after panic buying drained most of Britain's pumps and the government outlined moves to ease the impact of a lack of drivers needed to resupply retail sites.

Japan's impending leadership change, which would typically not change the course of its energy policy, is in the spotlight due to a potential major shift in focus after the ruling Liberal Democratic Party votes to elect a new president on Sept. 29.

Global oil demand seems poised to recover to pre-pandemic levels in 2022, but a sharp decline in upstream investments and OPEC's cautious approach in lifting the group's production volumes could lead to an undersupplied market next year.

Asian refiners could soon find their crude oil procurement options in the regional spot market increase significantly as Colombia's state-run Ecopetrol rapidly accelerates its heavy crude marketing efforts in the Far East, while the upstream company's ambition to apply carbon offsets to its crude cargoes could lure many Asian end-users seeking to raise their share of low carbon feedstock purchases.

Malaysia's Petronas remains cautious on the near-term petroleum refining business outlook amid the fragile transportation fuel demand recovery in Asia, with the state-run oil and gas company seeing a greater need to diversify its product slates by expanding into chemicals.