Taking Steps to Reduce the Carbon Footprint at a Bank

Utilities and local governments across the U.S. are taking action to make power and energy grids more resilient in the face of increasing climate risk.

New infrastructure legislation that has the potential to jumpstart a modernization of the  U.S. energy grid is advancing through Congress, and the Federal Energy Regulatory Commission is extending its rule-making efforts to transform the nation's energy landscape.  Market participants have called on regulators to impose climate policy onto the power sector, strengthen competitive transmission project bidding, establish a bold grid authority with a multigenerational view of transmission planning, and financially reward power companies that increase their percentage of clean energy while fining those that don’t.

Experts anticipate that the U.S. may need to triple its electricity-transmission capacity, and integrate the widespread use of renewable energy, to decarbonize its economy by midcentury. In the immediate term, risks to energy grids’ reliability and resiliency are intensifying. Last year’s 22 extreme weather and climate-related disasters—alongside this year’s devastating wildfires raging in California, polar vortex freezing Texas, punishing heatwaves across the West, and Hurricane Ida whipping through the Southern and Northeastern U.S.—have reinforced the urgent need to strengthen aging transmission systems and infrastructure. Such incidents have left millions without power and sent energy prices soaring. The U.S.’s bulk power system was strong enough to withstand the pandemic, cybersecurity threats, and supply chain issues last year while accommodating the integration of renewable energy sources like wind and solar. But extreme weather and climate-related events during 2020 resulted in more hours of operators’ localized load loss than the prior four years combined and the highest level of air conditioning circuit unavailability in the last five years, according to the North American Electric Reliability Corp.

Planning for more frequent extreme weather events is the "reliability challenge of our lifetime," John Moura, director of NERC's reliability assessment and performance analysis, told reporters during a webinar last month, according to S&P Global Platts. "Weather and the climate is the most important factor of the electric system.”

"I don't know of any utilities that are not preparing for more extreme weather today," Larry Gasteiger, executive director of Wires, a trade group representing transmission owners and developers, told S&P Global Market Intelligence. "There are all kinds of extreme weather events that seem to be increasing and that we need to deal with in the transmission system. I think it's more a question of which ones are taking additional measures."

The first half of this year saw a 17% year-over-year increase in clean power capacity installations, totaling 9.915 gigawatts and surpassing last year as the most active six months in new clean power installations, according to the American Clean Power Association. In the second quarter, the U.S. added 5.62 gigawatts of clean power—a 13% year-over-year increase and the most new capacity ever installed in that three-month time period.

"The clean energy future is well underway in America," ACP CEO Heather Zichal told S&P Global Market Intelligence. "Moving quickly on climate change in the U.S. will require meeting the Biden administration's goal of reaching 100% carbon-free power by 2035. The growing offshore wind industry can play a significant role in this as the next major source of homegrown American energy, representing a once-in-a-generation opportunity for the maritime industry and coastal and port communities."

This year’s overall renewable power growth follows last year’s surge in wind energy development. Wind accounted for 42% of all new installed U.S. power capacity in 2020, more than any other source, according to the Department of Energy.

"With a record pace of installations in the first half of 2021, our industry not only provides good-paying jobs but also is a key part of solving the climate crisis,” Ms. Zichal said in an Aug. 24 statement. "This growth and expansion are expected to continue, but we need policymakers in Washington to make long-term decisions to ensure we can continue to develop these critical projects.”

Today is Monday, September 13, 2021, and here is today’s essential intelligence. 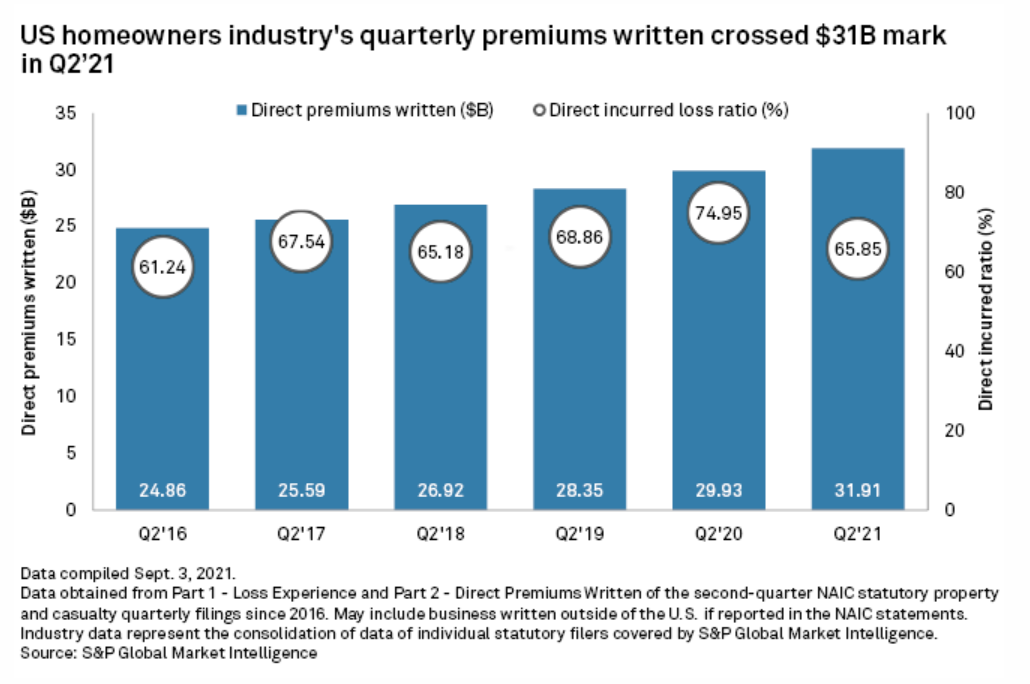 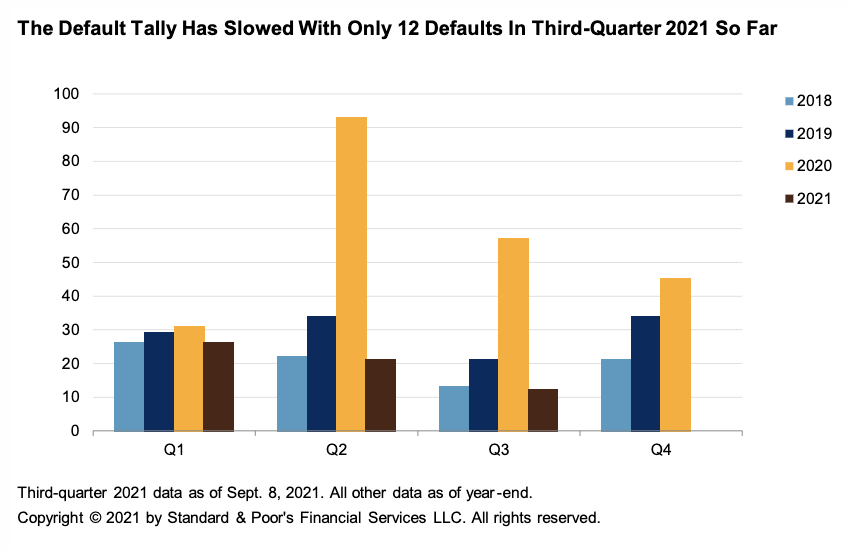 There were only 12 defaults in third-quarter 2021 so far—considerably lower than the first two quarters of 2021 with 21 and 26, respectively. Several factors have contributed to the slow in defaults, but the main drivers include a stronger-than-expected U.S. economic recovery fueled by the success in the COVID-19 vaccine, as well as stabilizing credit quality propelled by exceptionally favorable financing conditions.

Year-to-date European investor-placed benchmark covered bond issuance is about 30% lower than the already weak 2020 level, setting it on course for a record low in the full year. Transaction count has experienced a similar decline. The main causes of the decline are issuers' renewed access to competitively priced central bank funding and growth in bank deposits due to reduced consumer spending.

There's A New Catalyst In The Brent/Dubai Crude Complex 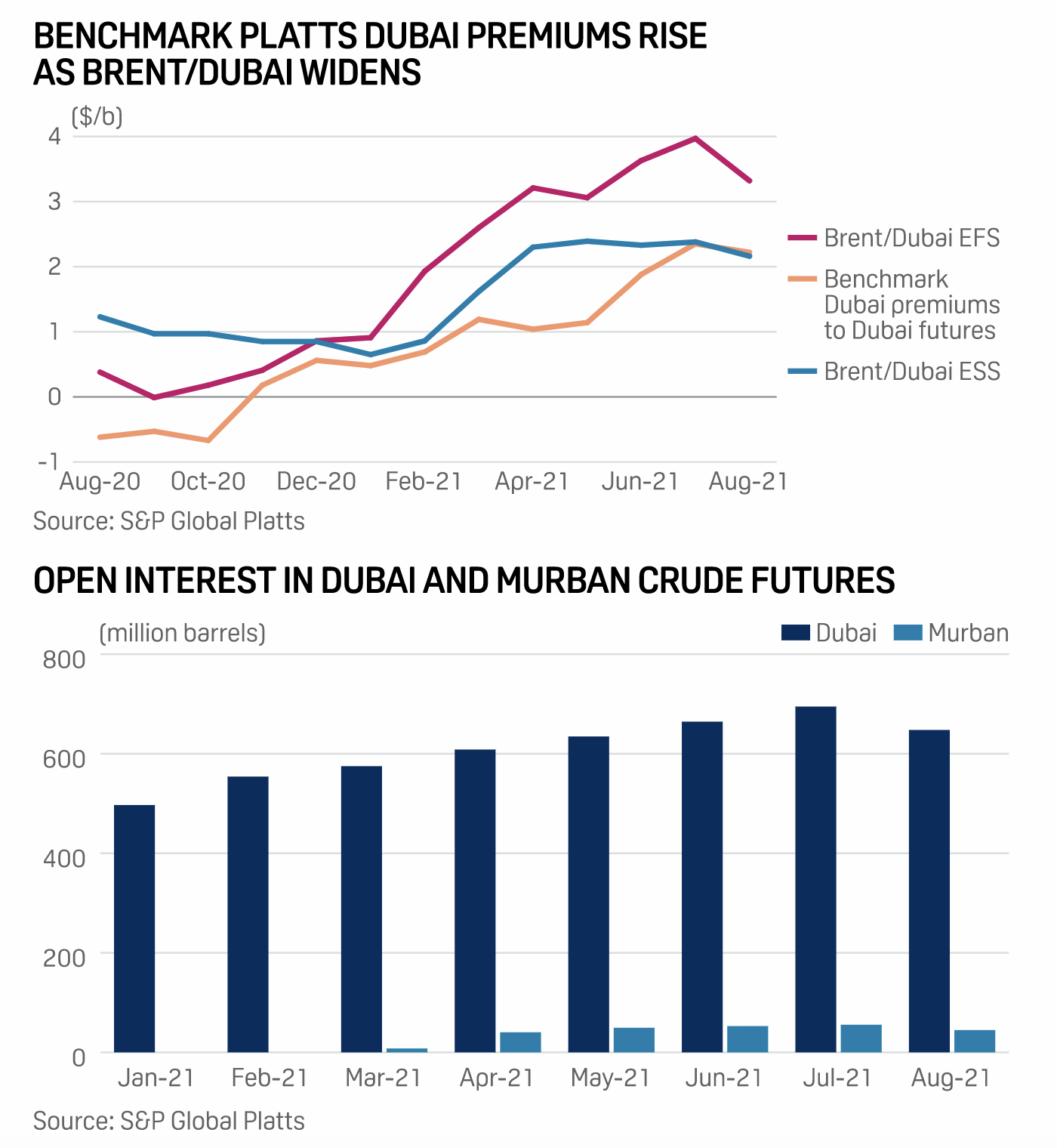 As the price spread between light, sweet Brent and medium, sour Dubai crude oil futures widened to the most in more than a year in July, market participants began to question what was driving the rally. The spread is vital to global oil flows as it is key to the economics of arbitraging oil barrels to Asia from all around the world.

The ongoing crude oil production shortage in the U.S. Gulf of Mexico following Hurricane Ida is now triggering demand increases and price hikes for both domestic light sweet crudes from the Permian Basin and for more imported crude grades.

On Aug. 10, 2021, the U.S. Senate approved the much-debated Infrastructure Bill, a cornerstone of President Joe Biden’s agenda. The bill overall is worth over $1 trillion. It is estimated that the bill will increase tax revenue collected from digital asset investors by $28 billion, not by raising tax rates or creating new taxes but rather by applying new information reporting requirements on participants in the digital asset industry. 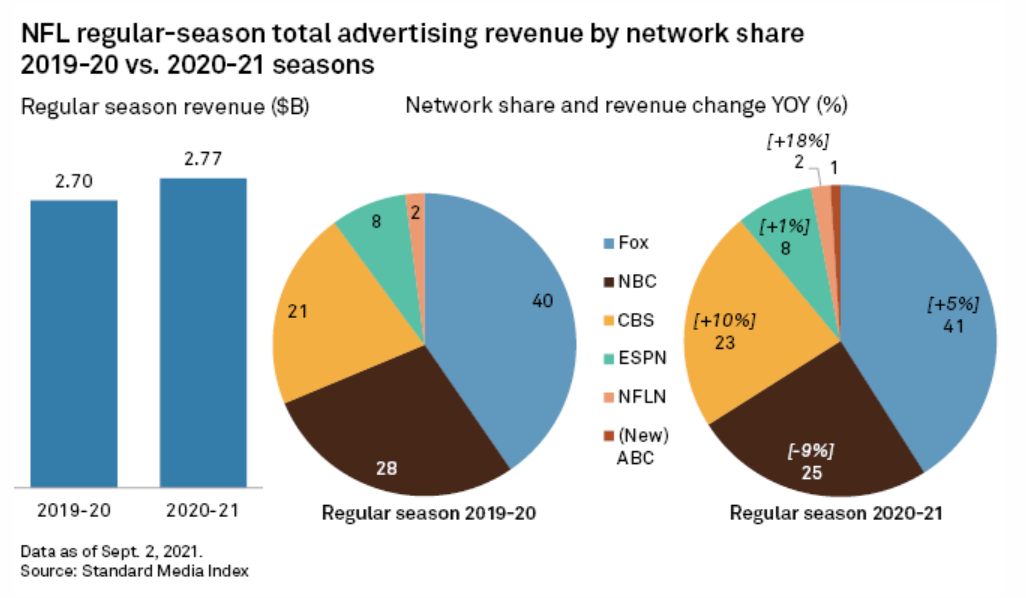 The 2021-22 NFL season is officially underway, and the league's network partners say they are in strong positions with advertising sales. Network executives at CBS, FOX, and NBC all reported significant NFL pricing gains over last year and cited multiple reasons to be bullish on the 2021-22 season, including strong upfront and scatter pricing, an extended season and the growth of sports betting.

The prevalence of cord cutting in the U.S. and the persistent decline in cable network viewership complicate carriage agreements between cable network companies and traditional multichannel operators. Traditional multichannel operators face weakening demand due to the rise of over-the-top platforms, but cable programmers continue to ask for affiliate rate hikes to keep their linear businesses afloat. 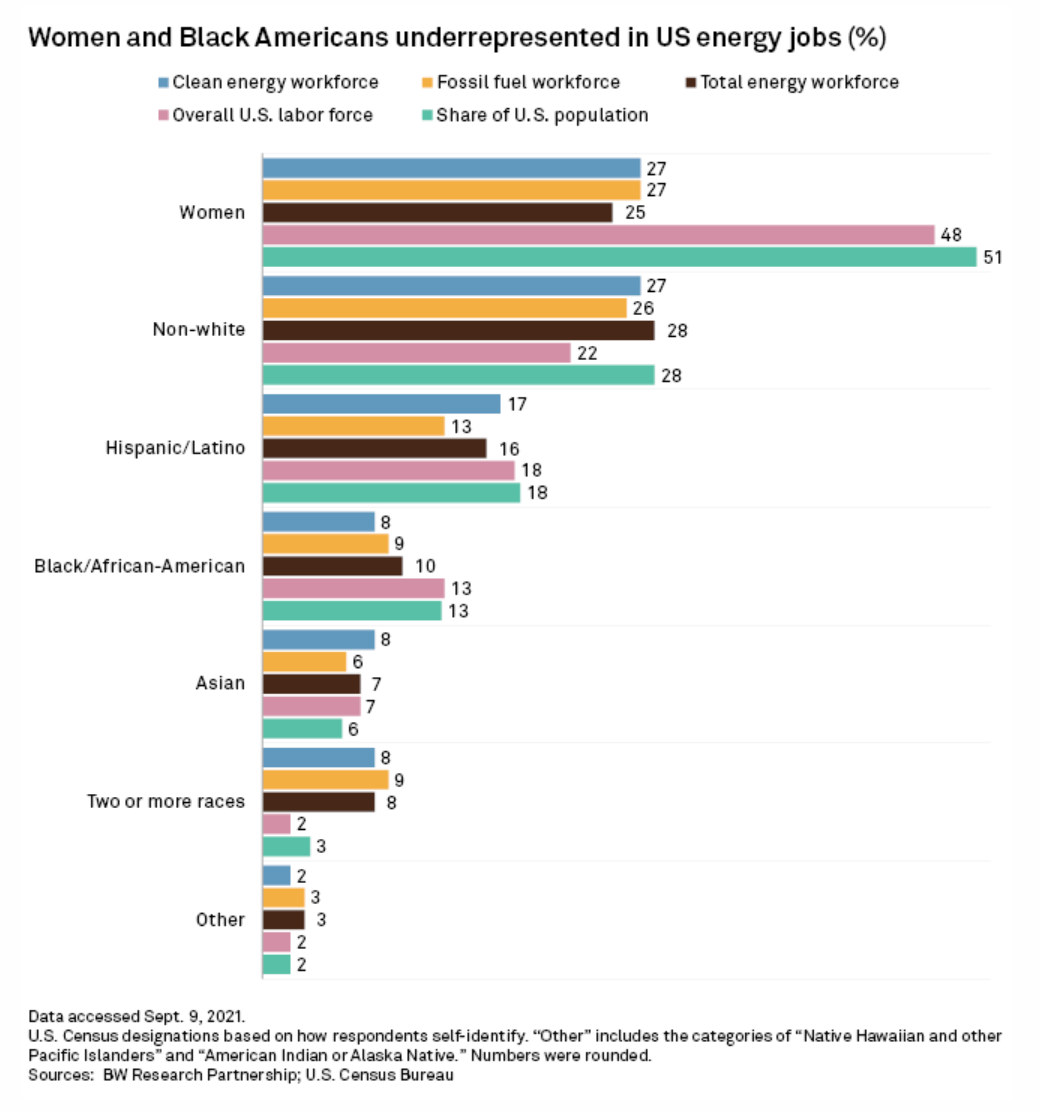 The market-driven transition to a low-carbon energy system, along with billions of dollars in federal and state funding to boost the economy, is expected to create several million new jobs in coming years. However, to help build a more equitable economy, the clean energy industry must also expand its hiring practices, said one Sept. 9 report released by multiple advocacy groups.

At a time when prices in the voluntary carbon market are gradually increasing, there is a segment proving to be even more expensive than regular carbon credits — Fairtrade-certified credits.

The global surge in devastating and destructive forest fires over the last several years has raised questions about the quality of nature-based carbon credits, which has had an impact on the prices of credits generated in areas that are at high-risk of potential carbon reversal.

Technological advances in removing carbon dioxide directly from the air have made significant strides but do not give countries and industries a free pass to burn fossil fuels without regard for the ensuing emissions, a US Department of Energy official said Sept. 9, a day after the launch of the world's largest direct air capture plant in Iceland.

The Biden administration's proposed target to cut US aviation emissions by 20% by spurring the production of 3 billion gal/year of sustainable aviation fuels by 2030 is achievable, if done at the expense of other fuels like renewable diesel, according to S&P Global Platts Analytics.

Oil And Gas Groups Go On Offense Ahead Of Methane Fee In U.S. Legislation

The American Petroleum Institute and a host of other oil and gas trade associations are working to fend off fees on methane emissions that could be included in a budget reconciliation package as part of efforts to combat climate change. 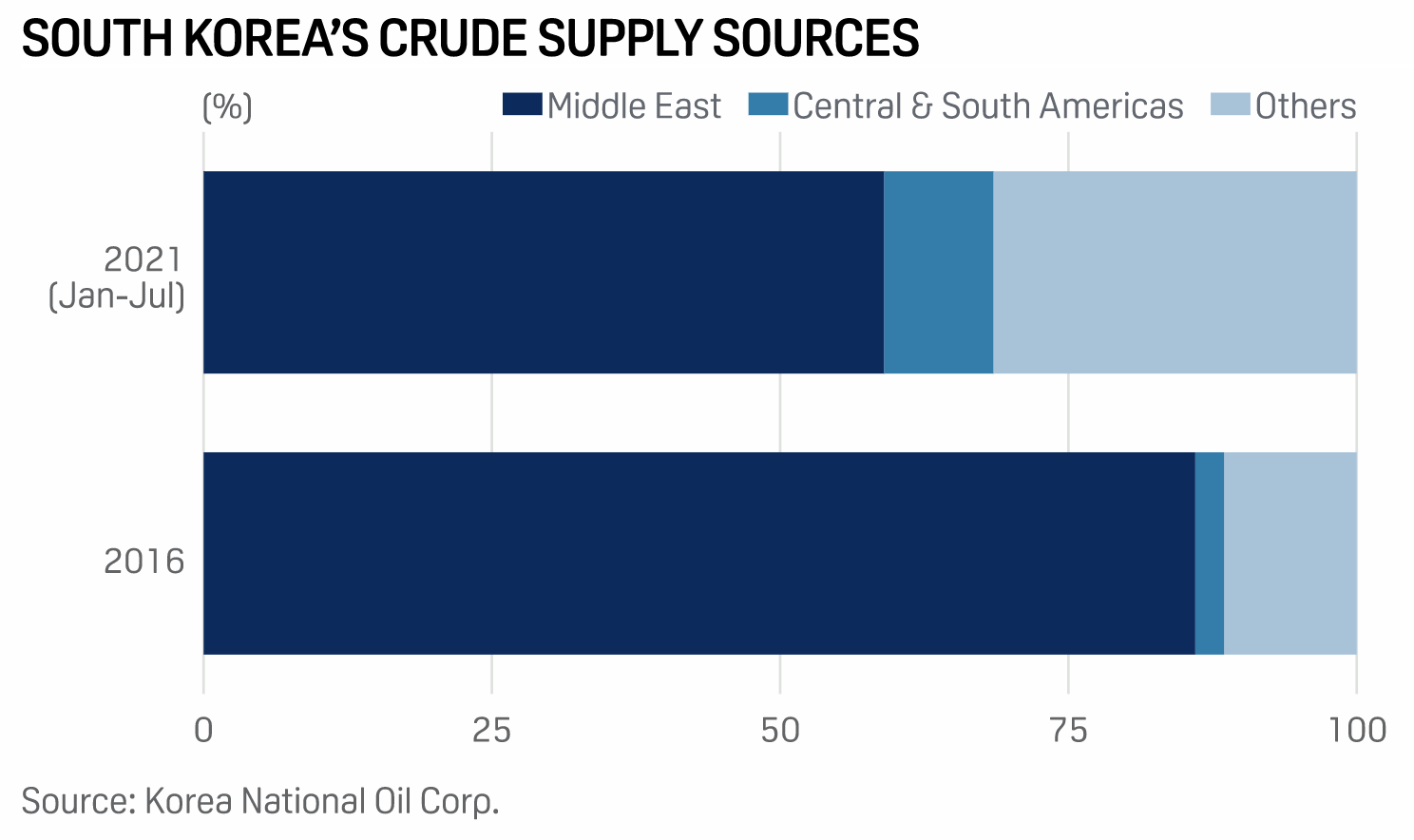 Major U.S. oil and gas producers have cut the volume of natural gas flared from oil and gas wells by 50% in a year as measured by energy intensity, according to a partnership organized by the industry's largest trade group, the American Petroleum Institute.