The prevalence of cord cutting and the decline in cable network viewership complicate carriage agreements between cable network companies and traditional multichannel operators.

According to Kagan estimates, top cable networks lost about $179.5 million in affiliate fees since 2013 from cable carriage disputes that resulted in blackouts that were eventually resolved.

The prevalence of cord cutting in the U.S. and the persistent decline in cable network viewership complicate carriage agreements between cable network companies and traditional multichannel operators. Traditional multichannel operators face weakening demand due to the rise of over-the-top platforms, but cable programmers continue to ask for affiliate rate hikes to keep their linear businesses afloat.

When a carriage deal expires and the parties involved do not reach a new agreement, cable networks go dark on the platform, which can cost the networks millions of dollars in lost revenues. According to Kagan estimates, top cable networks lost about $179.5 million in affiliate fees since 2013 from cable carriage disputes that resulted in blackouts that were eventually resolved. In 2020 alone, cable network companies lost $18.4 million because of these disputes. 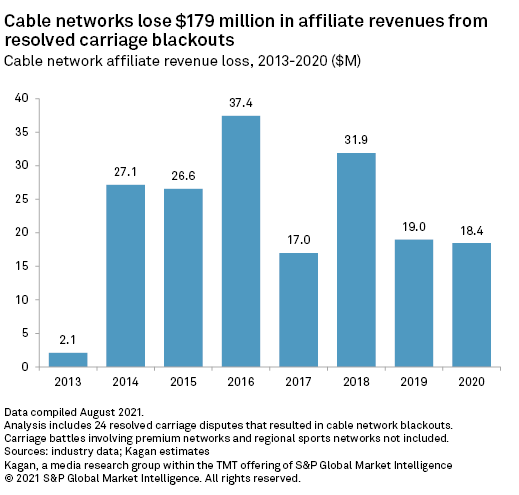 The carriage dispute between Fox Corp. and DISH Network Corp., which made FOX Sports 1, FOX Sports 2, BTN and FOX Deportes go dark on DISH from Sept. 26 to Oct. 6, 2019, was one of the higher-stakes cable carriage blackouts in recent years, with around $175.3 million of annual carriage fees left hanging. The dispute was part of a larger contract disagreement between Fox and DISH, which involved the retransmission contract terms of Fox's local broadcast channels. The 10-day blackout cost Fox around $4.8 million in affiliate revenue loss, according to Kagan estimates. 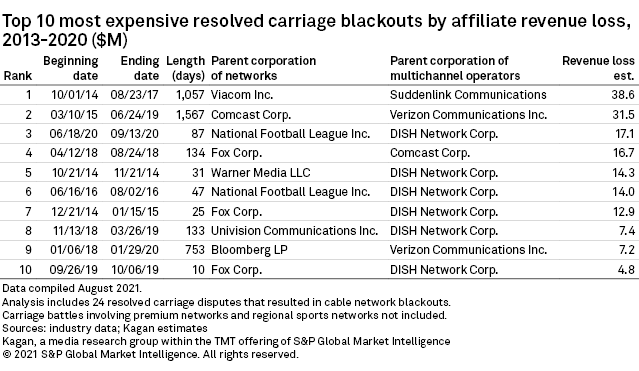 The most recent addition to Kagan's database of resolved cable carriage blackouts was the December 2020 battle between Nexstar Media Group Inc. and DISH over the carriage of NewsNation. Like the Fox-DISH dispute, the battle between Nexstar and DISH was part of a larger contract disagreement involving Nexstar broadcast TV stations. Approximately $18.3 million of annual cable carriage fees were at risk because of the blackout, but it was resolved after 22 days, costing the network $1.1 million in affiliate revenue loss.

The shortest resolved carriage blackout in Kagan's database was between Univision Communications Inc. and Charter Communications Inc., which lasted for just two days in February 2017. The companies' multiyear distribution agreement had not yet expired at that time, but Univision still pulled Galavision, TUDN and El Rey Network from Spectrum on Feb. 1, 2017.

Univision accused Charter of breaching their carriage contract by using lower affiliate rates, the implementation of which started after Charter bought Time Warner Cable, which had lower carriage rates with Univision. The blackout ended Feb. 3, 2017, after the New York Supreme Court granted Charter a temporary restraining order against Univision. Univision and Charter resolved their dispute in December 2017, but the two-day blackout cost Univision around $152,000 in lost carriage fees. 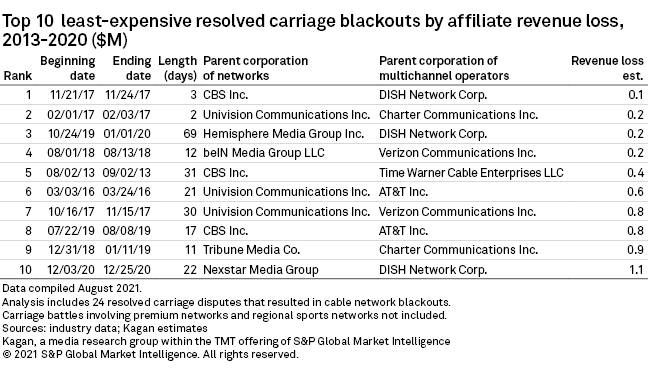 Looking at individual networks, The Weather Channel's 1,567-day blackout on Verizon Communications Inc. registered the largest loss from a resolved carriage dispute since 2013, with more than $31.5 million in lost carriage fees. The second-largest loss for an individual network came from the carriage dispute between National Football League Inc. and DISH over NFL Network. The sports channel was dark on DISH for 87 days from June 18 to Sept. 13, 2020, which resulted in an estimated affiliate revenue loss of about $17.1 million.

Cable network owners risk affiliate revenue loss in hopes of producing a more favorable deal with traditional multichannel operators, which still serve more than half of the video subscription market in the U.S. and still supply billions of dollars in revenues for the cable network industry. Although traditional multichannel operators continue to lose subscribers over the years, cable networks will not abandon their cable, satellite and telco customers in the near term, as traditional cable is still a profitable business. 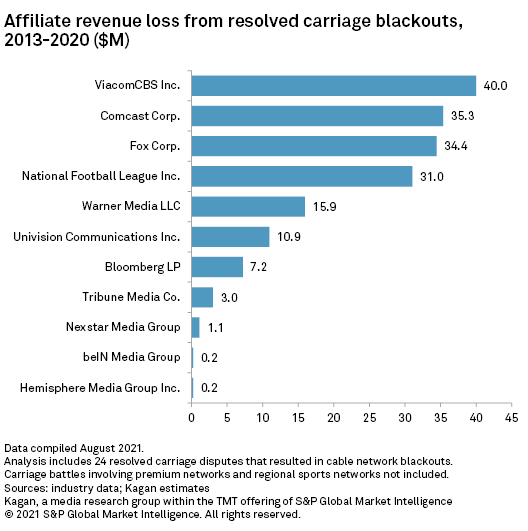 Distribution revenue at US cable network companies rises 9.3% in Q2'21