Major energy companies are pitching carbon-neutral crude as their solution to the climate crisis, despite advocates’ concerns that bundling offsets with fossil fuels is more marketing ploy than emissions reduction effort. Certifying and trading carbon-neutral crude may be a component of the broader effort to align oil and gas conglomerates with the energy transition to renewable sources.

“The market value of a crude grade has traditionally been defined by its density and sulfur content, but as the oil sector looks to better understand the emissions associated with producing different grades, carbon-intensity could become the most important characteristic of them all,” S&P Global Platts said in an analysis last week. “Light sweet crudes currently tend to trade at a premium to heavy sour ones because they easily crack into the most-demanded products of gasoline and diesel. But as countries and companies commit to decarbonization targets, transport fuels may no longer remain the dominant force, as carbon intensity is expected to emerge as the new standard determining the quality of a crude grade.”

Many countries’ fossil fuel dependence and climate ambitions remain dramatically at odds, even after the 2021 United Nations Climate Change Conference that was widely considered the international community’s last best chance to agree on how to combat climate change. Investing in carbon-neutral crude—oil whose greenhouse-gas emissions and carbon footprint created in production are negated by carbon offsets purchased—may prove to be an accessible solution to this prolonged problem.

S&P Global Platts, which recently launched a Market on Close assessment process on the spot market for trading carbon-accounted crude, defines carbon-neutral crude as allowing “for carbon-mitigation efforts around the world to offset the emissions caused during the lifecycle of crude, from the wellhead through fuel combustion. Comparatively, achieving net-zero would amount to being free of emissions without this type of third-party mitigation. Assessing crude oil’s carbon intensity is likely to define its value—with higher carbon-intensive crude holding lower value, especially for oil produced at a high rate of emissions.

Following success in the liquified natural gas market, sales of carbon-neutral crude have happened this year without common criteria, raising questions about what constitutes actual and verifiable carbon-neutral crude. Texas-based energy multinational Oxy sold the world’s first carbon-neutral crude cargo of 2 million barrels, which was offset by voluntary carbon credits certified by the Verified Carbon Standard, at the beginning of this year to Indian refiner Reliance. In a sale of 600,000 barrels of what it characterized as "certified” carbon neutral crude to Mediterranean refiner Saras, Nordic oil and gas company Ludin’s deal covered "life of field" emissions but not combustion. Recent carbon-accounted crude activity has also been seen in the  U.S., Libya, and other  economies.

Although global oil demand would need to decline 75% in the next three decades to put the world on a pathway to net-zero emissions by 2050, the world’s most ambitious energy transition scenarios include oil in the near- and medium-term global energy mix, according to S&P Global Platts. Recent oil market tightness may end soon as the international oil supply is expected to rise by 1.5 million barrels per day through the end of this year. Oil majors have been adamant that oil plays a prominent role in the energy transition, too.

“Comprehensive and immediate action to manage and reduce the emissions generated by human activity will require a complete re-think about how we look at the carbon intensity of those things that we rely on every day … The oil industry is going to have to start reckoning with the relative climate impact of the fuels they produce and the crudes they opt to use,” S&P Global Platts said in a separate analysis. “When looking at the bigger picture and all that is necessary to become net zero by 2050, being aware of carbon-intensity when it comes to existing commodities is just the first step. Although it's a first, surely it is one that is absolutely necessary.”

Today is Wednesday, November 24, 2021, and here is today’s essential intelligence.

Sector Lead Casper Andersen and analyst Natalie Swiderek join S&P Global Ratings this week to give an overview of the 2021 German, Swedish, and Danish covered bond markets, the three largest in Europe. The latest episode of Take Notes also explores some of the differences between the regional markets and deep dive into the current trends in each market. In this end of autumn episode of Capital Markets View Taron and Chris discuss the reason why loan pricing is going up, despite high CLO issuance, as well as a look across the market.

—Watch and share this video from S&P Global Ratings 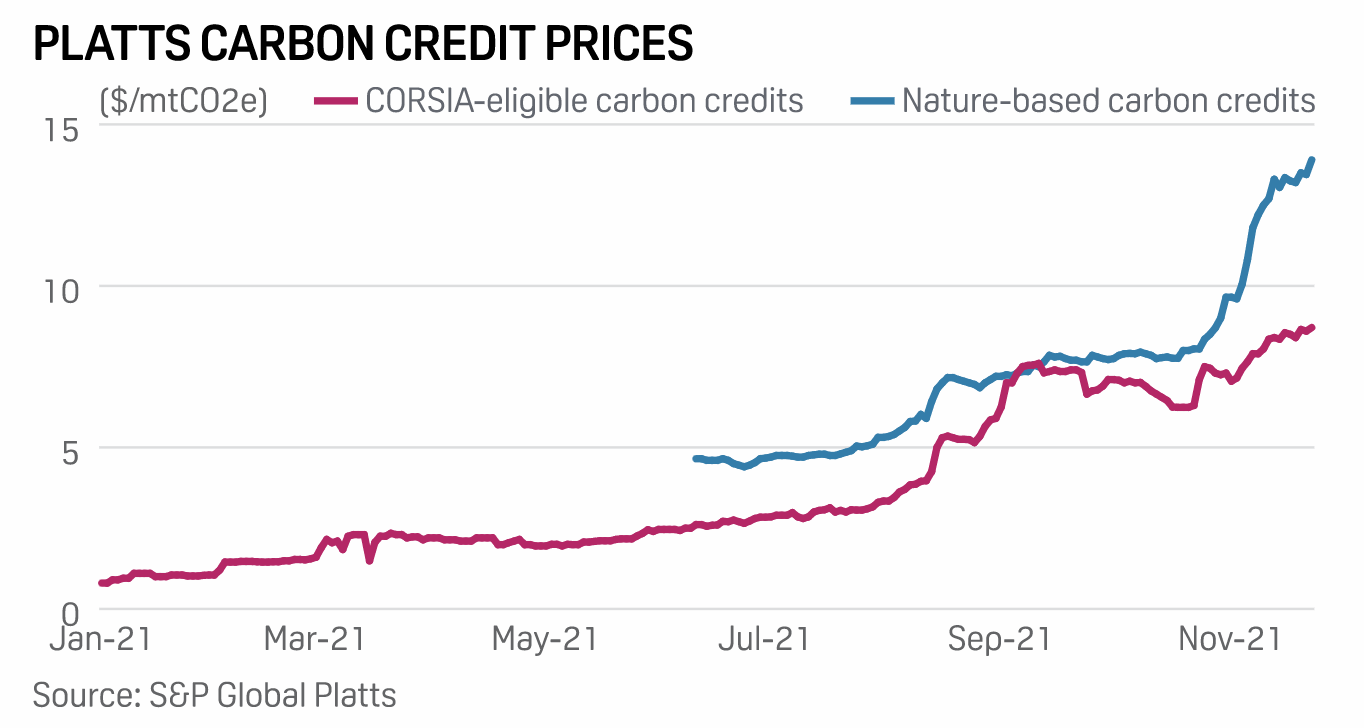 The deal reached at the UN Climate Change Conference in Glasgow Nov. 13 confirms the role of the voluntary carbon market, environmental markets standards-setter Verra said late Nov. 22. Almost 200 countries reached agreement on Article 6 of the Paris Agreement, which sets out the rules for global trade in greenhouse gas emissions reductions— a move that strengthens the market for voluntary carbon credits, Verra said. 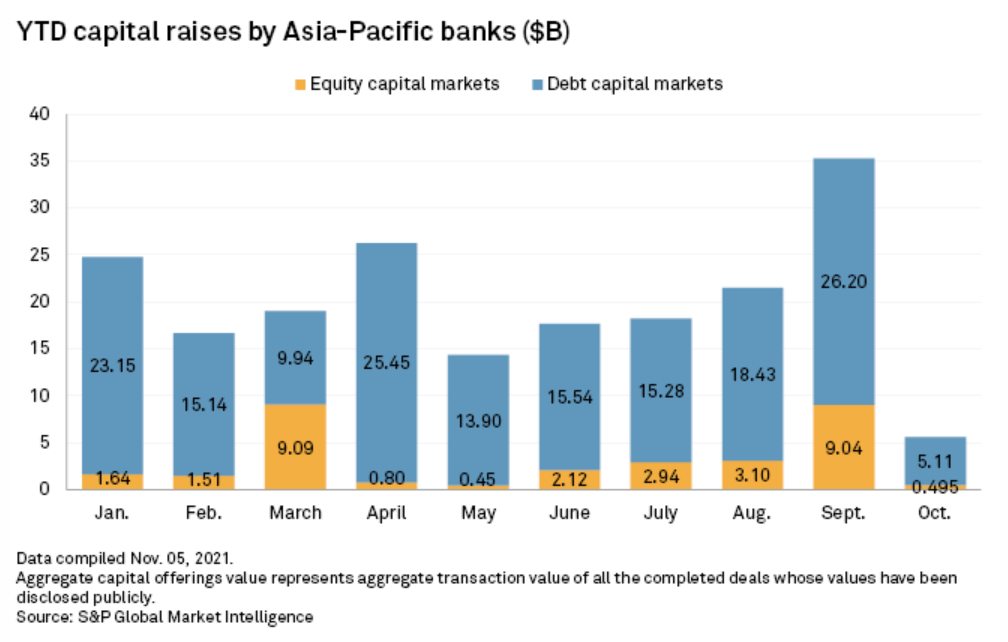 Aggregate capital raised by Asia-Pacific banks via debt in October slumped to its lowest this year, as concerns grew over a potential spillover of the liquidity crunch in the Chinese property sector. Banks in the Asia-Pacific region raised about $5.11 billion selling debt securities in October, led by Mitsubishi UFJ Financial Group Inc.'s $3 billion issue and Industrial & Commercial Bank of China Ltd. Hong Kong branch's $1 billion issue.

Svenska Handelsbanken AB (publ)'s decision to put its Danish and Finnish operations up for sale is a welcome move for an M&A-hungry banking sector in Denmark, while in Finland finding a buyer is likely to be more difficult. Sweden's largest lender by assets said last month that it would divest these businesses because there was little opportunity to scale up its offerings without significant investment. 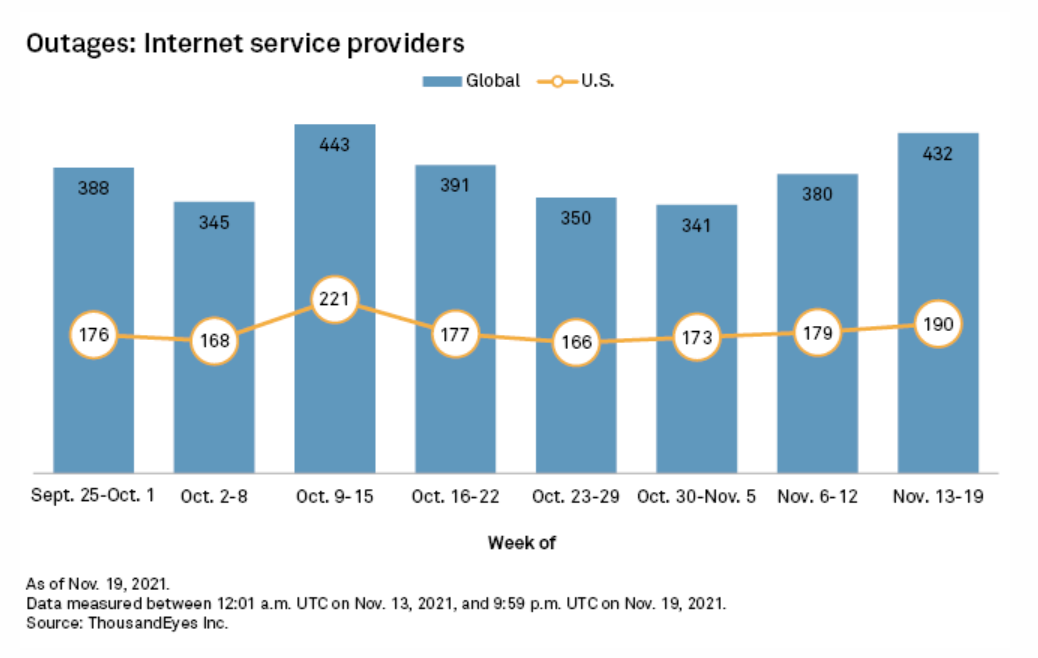 Global internet outages increased 14% to 432 for the week of Nov. 13, marking the second consecutive weekly increase, according to data from ThousandEyes, a network-monitoring service owned by Cisco Systems Inc. U.S. outages were up 6% to 190. The U.S. total made up 44% of all global interruptions observed last week, down from 47% in the prior week. 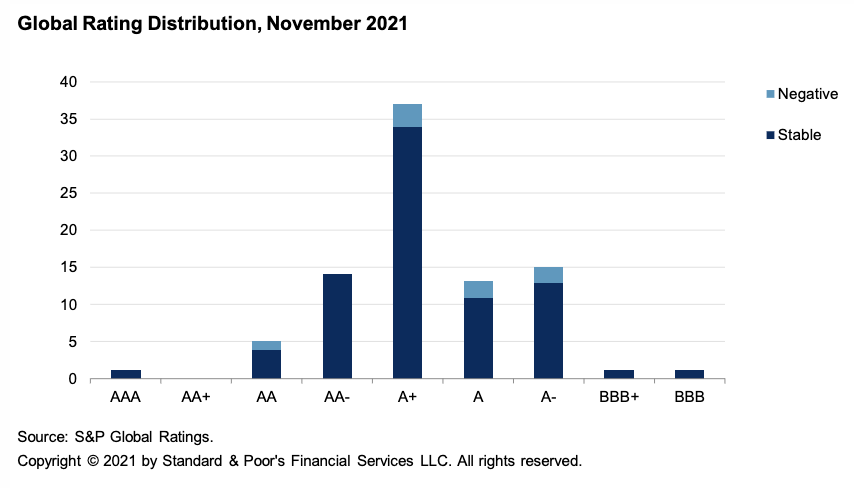 Our ratings on social housing providers globally are expected to remain largely stable in 2022, with some negative bias in the U.K. Demand for affordable housing remains strong, and we expect SHPs to continue to invest in new homes, while increasing spend to enhance the quality of the existing asset base.

A request for comment from the Federal Insurance Office has seemingly rekindled the industry's concerns over federal incursion into the state-based system of insurance regulation. President Joe Biden in an executive order tasked FIO with assessing "climate-related issues or gaps in the supervision and regulation of insurers" and examining the prospects of "major disruptions" of private insurance coverage in parts of the U.S. that are particularly vulnerable to the impacts of climate change.

California regulated utilities are on track to reach the state's Renewable Portfolio Standard goal of procuring 60% of retail sales from renewables by 2030, although 27 are at risk for not meeting near-term goals, according to a California Public Utilities Commission report to the Legislature.

Hydrogen Firms Rally Around U.S. Reconciliation Bill Provisions As It Heads To Senate

Companies up and down the hydrogen value chain are rooting for eight long-term provisions within the U.S. Build Back Better Act that they say would accelerate the U.S. hydrogen economy to maturity.

E.ON To Invest Eur27 Billion By 2026 Into Europe's Energy Transition

Europe's biggest energy network operator E.ON plans to invest some Eur27 billion ($30.4 billion) in the energy transition over the five years to 2026, the Germany-based utility said Nov. 23. Some Eur22 billion are planned for the expansion of its gas and power distribution networks with E.ON also planning to add 5,000 new electric vehicle charging points across Europe boosting its customer solutions business, it said.

In addition to powering electric vehicles, batteries will play an essential role in the energy transition story by optimizing intermittent clean energy sources such as wind and solar. But what happens to batteries in their end-of-life? Although it can still be optimized, battery recycling technology already exists; but despite its potential to alleviate battery metals' tightness in the future, can it really replace lithium, cobalt, and nickel mining?

—Listen and subscribe to Platts  Future Energy, a podcast from S&P Global Platts 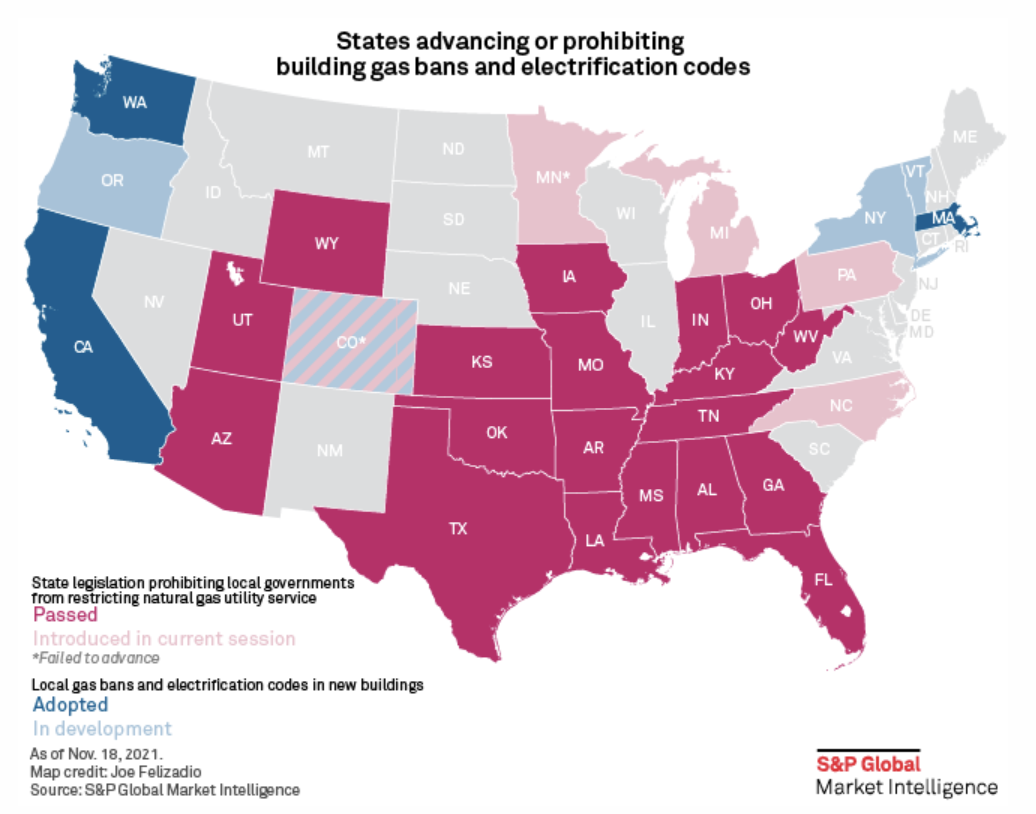 The movement to ban natural gas use in buildings reached a milestone in the second half of 2021, with California notching its 50th building electrification mandate. Meanwhile, the number of states prohibiting the policy appeared poised to top out around 20 this year, as all-electric construction ordinances advanced on the East and West coasts and cropped up in Oregon.

FERC Hears Concerns On Costs, Duplication As It Weighs GHG Mitigation For Pipes

The U.S. Federal Energy Regulatory Commission received some warnings about the risk of duplicating regulation and saddling consumers with added costs, as it weighed whether to require interstate natural gas project applicants to mitigate climate impacts tied to their facilities.

Carbon pricing, a wholesale power market and the development of hydrogen and ammonia trading hubs could incentivize low-carbon hydrogen investment in the Middle East, Alcazar Investment Management said this week in a report.

The European wholesale market for natural gas has become part of a wider global market for the fuel, and a key driver within it, participants in a panel discussion said at the S&P Global Platts European gas and LNG conference Nov. 23.

UAE Sees No Need Yet For OPEC+ To Deviate From Planned 400,000 B/D Oil Output Increase

OPEC and its allies are likely to stick to their plan to increase crude oil output by 400,000 b/d next month, even if key consuming countries release barrels from their strategic reserves, though a looming oversupply in the first quarter will bear watching, UAE energy minister Suhail al-Mazrouei said Nov. 23.