As operating conditions changed in the first quarter, so did attitudes. Now, many market participants expect volatility to define debt markets in 2022.

Against the backdrop of the Russia’s invasion of Ukraine, rising energy and food prices and the implementation of interest rate increases by central banks, ratings downgrades are outpacing upgrades. In the first quarter of this year, global corporate defaults reached 14—the lowest year-to-date level since 2014, but the highest quarterly total since the April-June period in 2021, according to S&P Global Ratings. The defaults were centralized equally in emerging market economies and the U.S., with seven defaults each.

The majority of U.S. buy-side, sell-side and advisory professionals expect volatility to continue for the foreseeable future, as 35% of investors believe the worst is yet to come regarding price swings in leveraged credit markets, according to a first-quarter leveraged finance survey by Leveraged Commentary & Data, part of S&P Global Market Intelligence.

“As volatility in financial markets has increased and borrowing costs have begun to rise, we see a high risk that investors could soon demand significantly higher returns because of an escalation in the Russia-Ukraine conflict, the continuation of historically high inflation, or other unexpected adverse events,” S&P Global Ratings said in its second-quarter global credit conditions outlook. “A sharp and rapid market repricing could hurt liquidity, exchange rates, and capital flows, and cause higher debt-servicing costs and tighter financing conditions—which is especially concerning against the backdrop of record high debt levels. This could harm particularly the large share of lower-rated borrowers (globally, we rate 19% of nonfinancial corporates ‘B-’ or below) and some emerging markets and low-income countries most dependent on external financing.”

Nearly 70% of investors surveyed by LCD expect inflation to remain above 4% a year from now, and approximately one-fifth of LCD’s survey base, or 22%, continue to expect inflation to be the risk most likely to affect credit portfolio performance over the next six months.

Inflation has already contributed to a slowdown in mergers and acquisitions in the U.S. During the first quarter, the number of deals fell 16.7% year-over-year in February, while the value of those deals dropped 30% over the same month in 2021, according to S&P Global Market Intelligence.

“The final piece of the early 2022 picture was the continuing rise in inflation,” S&P Global Economics said in its global second-quarter macroeconomic forecast. “Inflation has moved front and center as a policy challenge: Higher U.S. dollar rates will tighten financial conditions, moderate growth, and spill over to other economies, while the ECB tightening will be much more gradual.”

Today is Tuesday, April 5, 2022, and here is today’s essential intelligence. 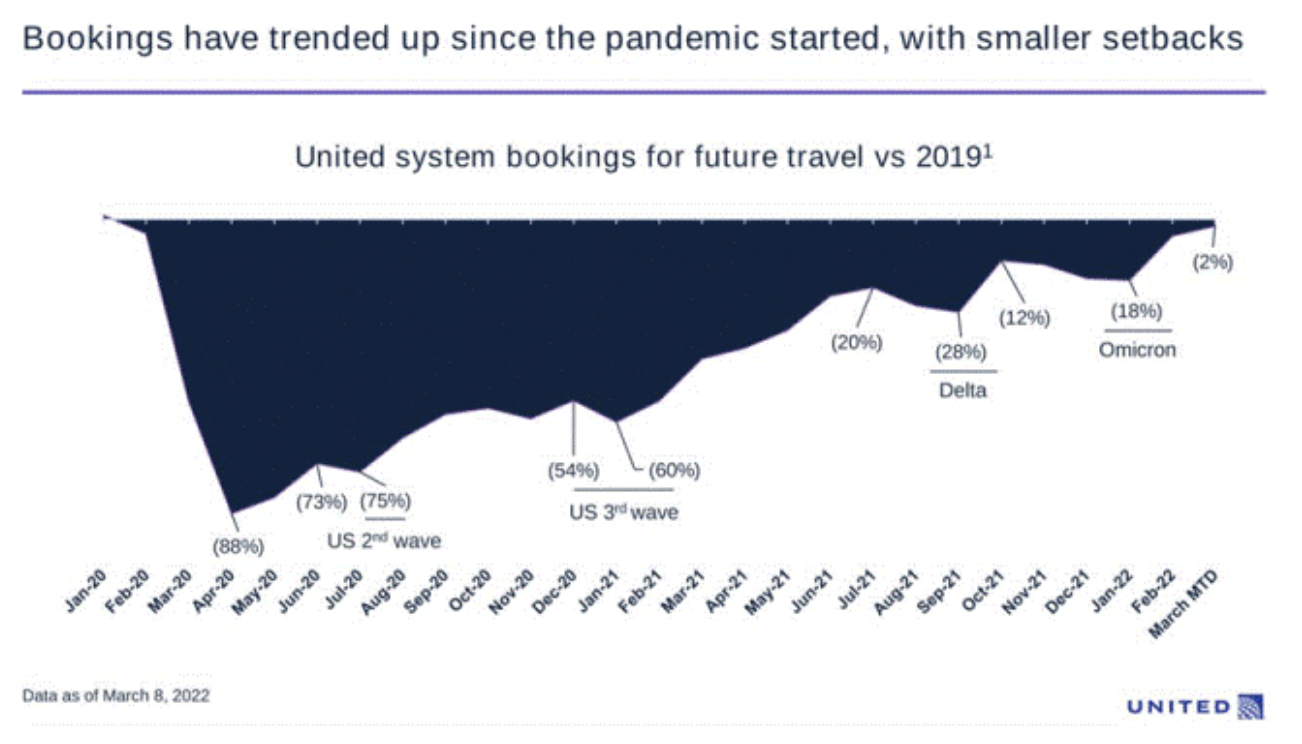 Russia's invasion of Ukraine has added an additional obstacle to the airlines' financial recovery from the COVID-19 pandemic. For U.S. airlines, this is not so much due to any material loss of traffic, rather these headwinds stem from the war's indirect effects, particularly the significant increase in oil (and thus jet fuel) prices. Because few U.S. airlines hedge their fuel costs, they will need to rely on raising air fares to offset their higher fuel expense. Fuel is normally the second-largest expense for airlines after labor costs. In their 2021 annual reports, U.S. airlines disclosed estimates of how much a specified increase in jet fuel prices would raise their expenses.

Low volatility strategies were designed for times like the ones we’ve experienced so far in 2022. Year-to-date through March 31, 2022, equities have struggled. In the U.S., the S&P 500® was down 4.6% YTD. The S&P Developed Ex-U.S. BMI and the S&P Emerging Plus LargeMidCap fared even worse, plummeting 5.6% and 6.7% YTD, respectively. But emerging markets have underperformed broader global benchmarks and the U.S. since long before the first quarter of 2022. In the past 25 years, the S&P Emerging Plus LargeMidCap gained 6.8%, while the S&P 500 was up 8.6%.

Tyson Slocum, energy program director at Public Citizen, is among stakeholders pushing the agency to engage publicly on the implementation of its regulation setting federal speculative position limits on physical commodity markets. He also recently authored a letter urging the CFTC to reject any bailouts for commodity traders, in light of wild price swings in energy, metal, and agricultural commodity prices that have stressed the markets. He joined senior editor Jasmin Melvin on the Capitol Crude podcast to discuss that letter and what he'd like to see from this latest composition of the CFTC. He also gave his take on the new U.S.-EU task force working to send more U.S. gas to Europe and the Biden administration's latest efforts to ease pain at the pump for U.S. consumers.

The increase in European natural gas and power prices being exacerbated by Russia's invasion of Ukraine could create a U.S. manufacturing advantage for a couple of years if domestic power and gas prices remain lower than in Europe, experts said April 1. To address current energy policy challenges, it is important to look at the origins because it is easy to blame current commodity price increases on Russia's actions, "but let's recall we had an electricity and natural gas crisis in Europe prior to the Russian invasion," Brenda Shaffer, senior advisor for energy at the non-profit research institute Foundation for Defense of Democracies, said during a webinar hosted by Our Energy Policy, a non-profit energy topic discussion platform. 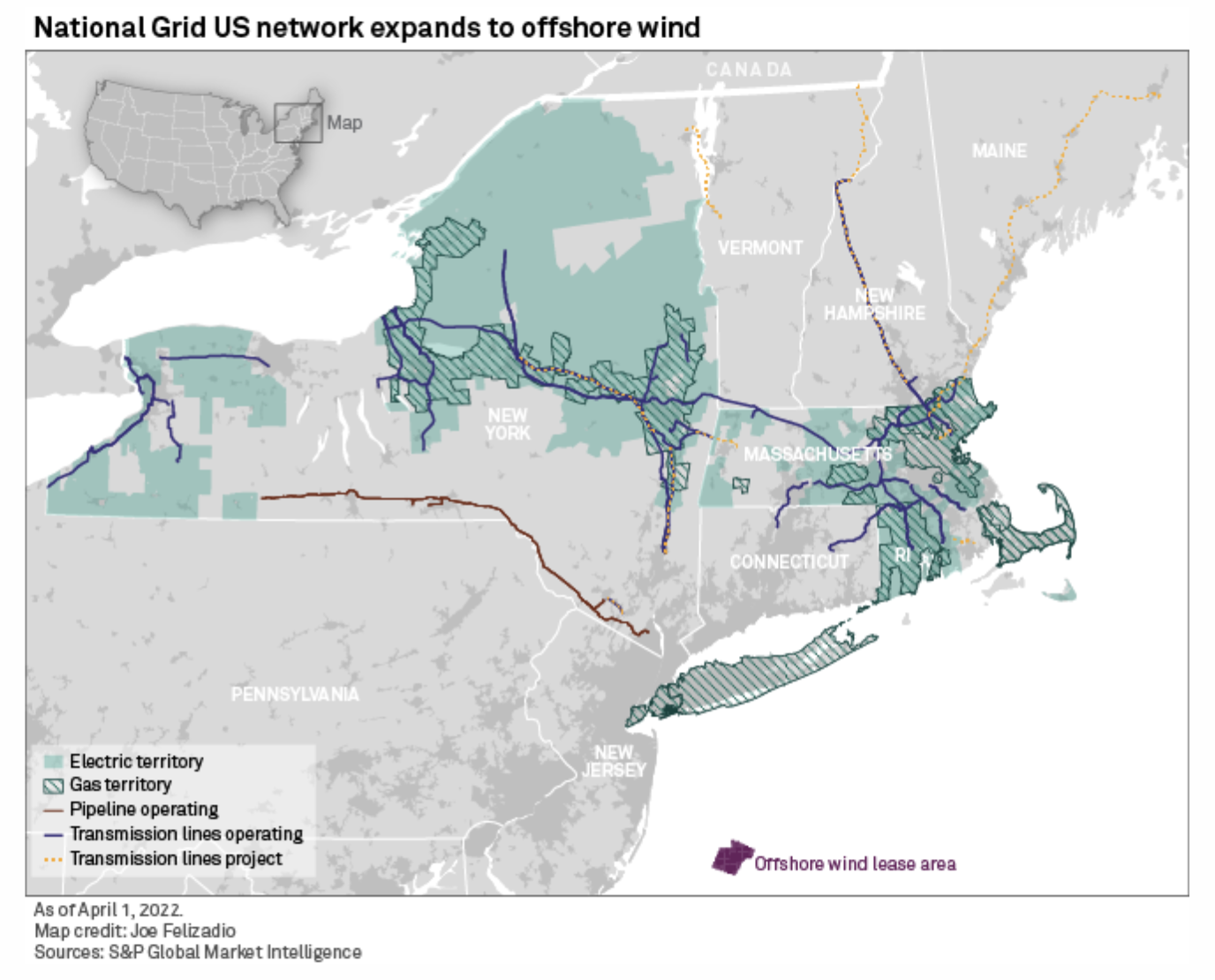 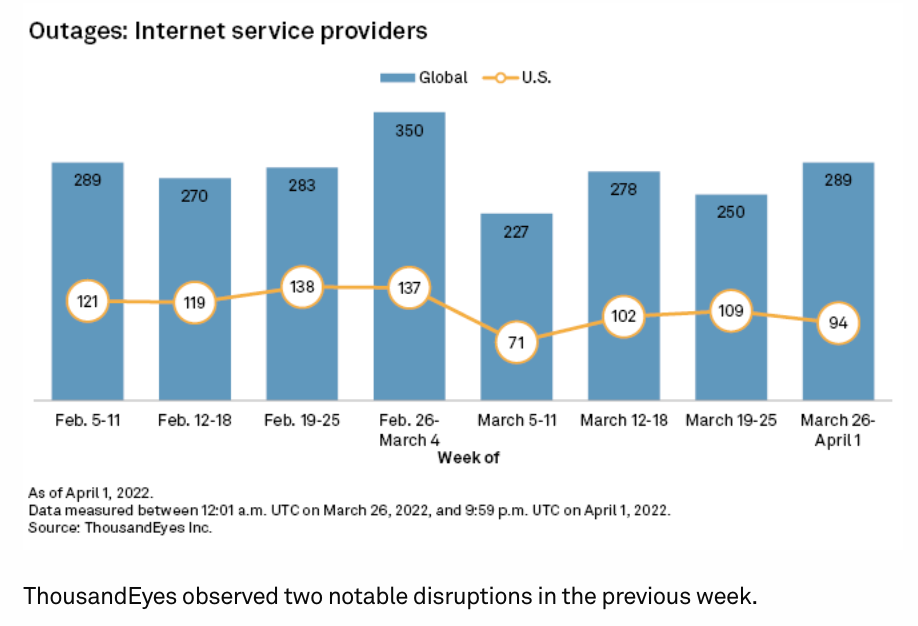 The volume of global internet outages increased 16% to 289 in the week of March 26, marking a return to levels seen in early February, according to data from ThousandEyes, a network-monitoring service owned by Cisco Systems Inc. U.S. outages fell 14% to 94 from 109 in the prior week, accounting for 33% of all global disruptions. ThousandEyes observed two notable disruptions in the previous week.