Video: Corporate and portfolio strategies of the global oil and gas companies

Debt levels of oil & gas companies had been rising significantly and peaked in 2017. Since then, debt and leverage ratios have started to drop and are expected continue to do so driven by improved cash flows and capital discipline programs across all groups of companies.

Organic capex in 2019 has increased compared with 2018 and it is expected to modestly continue in 2020-2021. Nevertheless, current organic capex remains at a fraction of the levels recorded in 2013/2014 and, as oil price looms, have been languishing in recent months, budgets are expected to be revised slightly downwards.

Moreover, the upstream sector has performed poorly in the stock markets not only since the oil price downturn in 2014, but also over the last decade. In addition, the share of the energy industry in stock market indexes such as the S&P 500 has recorded a staggering drop from roughly 25% four decades ago to below 5% currently.

More recently, this underperformance has started to have a momentous impact on investors who, as a result, are pressuring oil & gas companies to deploy excess free cash flow to reward investors (via share buybacks and higher dividend yields), slash debt, and to reduce investments in expensive, complex, long-cycle projects of the sort that experienced massive cost overruns and delays in the past decade.

Recent IHS Markit research shows that the Exploration & Production (E&P) sector is experiencing a 'crisis of perception' as investors that were driven by growth and value shift their portfolios from E&P to better performing index funds and/or "greener energies" sectors. Learn more details in our forced change study.

Obviously, reluctance to invest in E&P - based on the performance of the sector and/or Environmental, Social and Governance (ESG) aspects - raises worries around capital availability for the sector, heighten by recent announcements from some financial institutions and pension funds to be more restrictive in lending to or investing in certain or all fossil fuels. Furthermore, until oil & gas companies can achieve more attractive returns in line with historical mid-teen averages from traditional business sectors, they are unlikely to remain out of favor with investors.

In response, oil & gas companies are shifting their portfolios to shorter-cycle projects with faster payback periods, and in many cases prioritizing gas as the fossil fuel with the least carbon footprint, and allocating an increasing amount of capital to sectors seen as supporting the energy transition. IHS Markit research shows that investments in low-carbon sectors by the seven integrated oil & gas companies made since 2010 have reached over $8 billion. Nevertheless, until the oil & gas companies can achieve attractive returns from these new sectors, it is expected that they will not scale up investments significantly and their efforts will continue to be perceived by certain stakeholders as greenwashing. 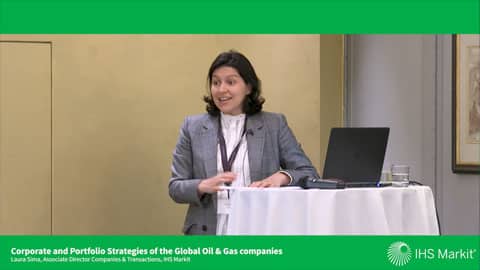 Laura Sima is an associate director for companies & transactions at IHS Markit.