COVID-19 shaping the future of the US crude oil market

With the impact of COVID-19 pandemic spreading quickly across the world, all eyes are now on the US and how major cities have been reacting, with the large companies already closing offices and operations. Additional measures to isolate more people in an effort to slow the spread and protect the vulnerable population groups, could translate in much harder times for the oil industry over coming weeks or months. The potential effects for US oil in case of a full quarantine is the topic we'll discuss below.

So far, we've already observed US border closures in combination with travel restrictions, which were then followed by shop and school shutdowns hitting the US oil industry rather hard. The sharp decline in the West Texas Intermediate (WTI), the primary US oil benchmark, by around USD 30 per barrel in just a month, leaves no space for US oil producers to achieve any profits. Current oil prices only marginally surpass breakeven for most producers in the country.

In the meantime, Saudi Arabia and Russia proceed with expanding their production, planning to flood the world with much more crude oil from early April, even if global demand for oil is under severe pressure. With travel bans and entire countries shutting down everything starts becoming the new normal.

The US has been the largest consumer of crude oil in the world, with a market share estimated at around 20% at marginally below 20 million b/d. The transportation sector is responsible for almost half of these volumes consumed in the US.

Crude Oil flows to the US has remained below three million b/d in 2020 Q1, as the country has turned into a net exporter. Saudi Arabia and Iraq, together with oil producers across the Americas, including Mexico, Colombia, Canada, Ecuador and Brazil, remain the major suppliers of crude oil to the US. 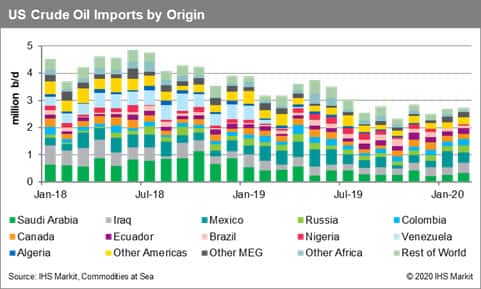 Seaborne exports from the US have been strengthening in 2020, with South Korea continuing to absorb more than 350,000 b/d, while India surpassed 250,000 b/d once again last month. However, barrels to be added by Saudi Arabia and other producers across the Middle East in combination with India imposing a general lockdown could add pressure against US flows to the South Asian country. China hasn't managed to increase imports from the US so far, even after the "Phase One", but the future by late 2020 could turn much more promising. 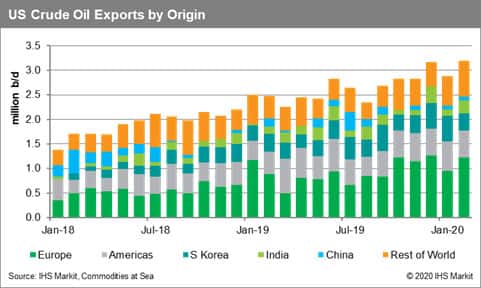 Most recently, there has been some recovery in oil prices in hope that Washington will finalize a USD two trillion coronavirus aid package to support the country's economy which could support oil demand. Volatility in WTI prices is set to remain high. However, the overall crude demand outlook looks rather disappointing as long as travel restrictions remain in place to prevent the coronavirus spread.

Moreover, the US Department of Energy announced its plans buy up to 30 million barrels of crude oil for the Strategic Petroleum Reserve by the end of June. This is according to President Donald Trump's directive to fill the emergency stockpile to support domestic crude producers.

This could affect future seaborne exports and imports. The reserve in Texas and Louisiana has 77 million barrels of available capacity. Volumes of both sweet and sour crude oil will be bought primarily from small and midsize producers with less than 5,000 employees.