Power generation in Asia Pacific is a key area for exploring the potential use of carbon capture and storage (CCS). In 2020, power generation accounted for 36% of global carbon emissions, and Asia Pacific represented a 47% (and growing) share of global power demand. We identify three markets—Australia, Vietnam, and China—as case studies to showcase the diversity in economic development, power market structure, decarbonization goals, resource availability, and affordability across the region. Without carbon capture (CC), carbon emissions from a CCGT unit are approximately half that from a coal unit, while CC equipment can capture 90% of a plant's carbon emissions. Incremental CC capex does not vary among different markets at the current stage. However, CC premium as a percentage of total generation cost diverges widely owing to the high level of variation of components in the non-CC levelized cost of electricity (LCOE), impacting coal-gas competition differently across the region. 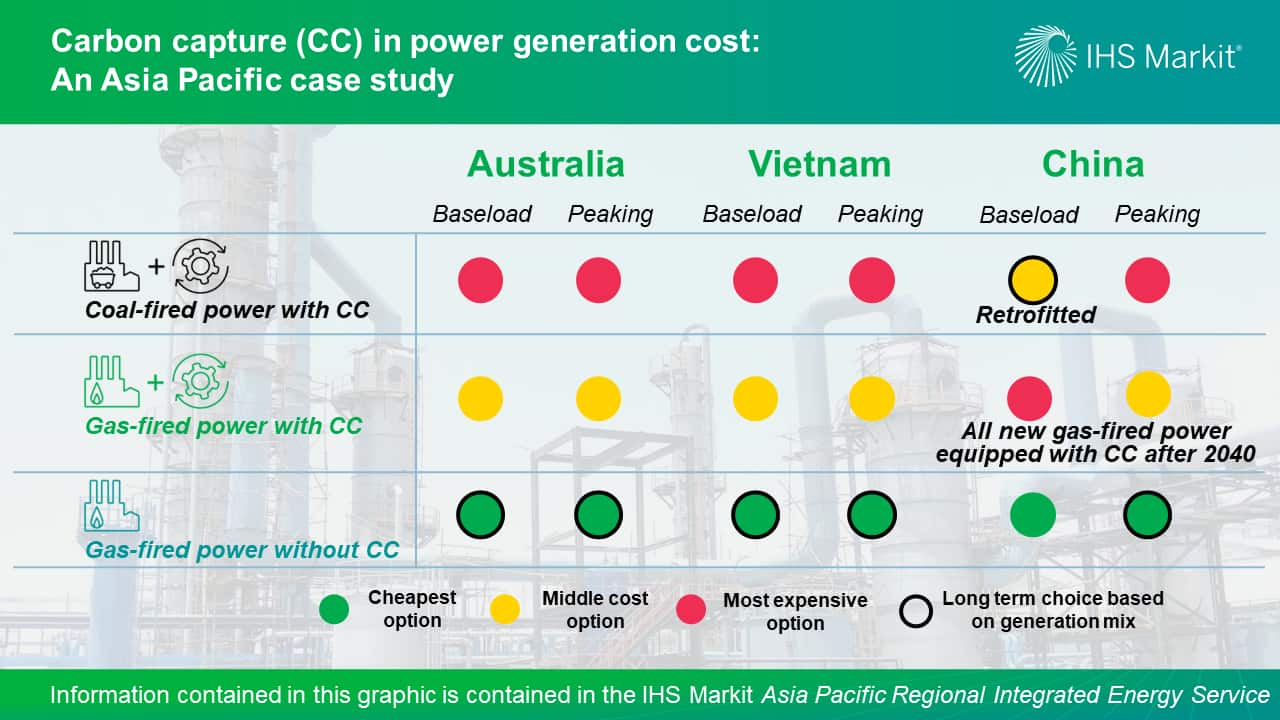 Incremental CC capex on a coal-fired power plant is about twice the incremental capex for a gas unit owing to the larger amount of carbon that needs to be captured. In Australia and Vietnam, the significant incremental cost of CC on coal-fired power compared with on gas units will make coal-fired power more expensive than gas-fired power running as baseload, midmerit, and peaker. As a result, CC will not reverse the coal phaseout in these markets. The role of thermal power with and without CC in the future capacity mix will depend on renewables' and energy storage's penetration levels to meet power demand and the action plans to achieve carbon commitment in each market.

Transportation and storage costs are significant elements that need to be taken into account but do not change the conclusion that with CCS gas power is cheaper than coal power in Australia and Vietnam. In China, the high end of carbon transportation and storage can alter the coal versus gas competitiveness in generation cost. Nonetheless, the key conclusion for China also remains unchanged—gas without CCS will be a medium-term decarbonization option, while new coal-fired power, with or without CCS, will lose favor owing to the global decarbonization ambitions and the supply chain disruption that will follow.