Fuel of the Future

Hydrogen is a fuel for the future, but its use is already well established. To harness its potential to decarbonize energy systems and create a real hydrogen economy, large-scale investments are needed, write Jeffrey McDonald and Andrew Moore.

An unusual amount of commentary on renewable hydrogen during second-quarter earnings calls offered a view into the nascent U.S. power-to-gas ecosystem, with at least two U.S. utilities staking out leadership positions in the emerging decarbonization strategy.

Executives at large North American utilities and power generators outlined plans to ramp up renewable hydrogen production in the coming years. While they generally agree it will take roughly a decade to scale up the technology, production marks the first step towards ultimately displacing downstream natural gas use, including at local distribution companies, or LDCs.

“As important as oil was in the past”: Hydrogen Rises Up the Agenda in Q2

Considered a distant dream by many just a year ago, hydrogen has reached the European utility mainstream in recent months. Evidence of a gear change shone through in recent second-quarter earnings calls, as power generators and network operators outlined their planned involvement in a future market for the fuel.

Policy certainty is responsible for much of the hype, with the EU's hydrogen strategy setting out the blueprint for 40 GW of installed electrolysis capacity by 2030 and national governments following suit with their own targets. Hydrogen is at its inflection point as governments and the industry step up efforts to embrace the fuel, but expanding use beyond refining and chemicals as well as developing a trading model would be crucial for cargo flows and consumption to take off, industry leaders told the Gastech Virtual Summit.

While hydrogen's versatility is attracting interest from governments and companies, there are many challenges -- such as high costs, transportation as well as scaling up production -- that have to be addressed through clear policies, projects and incentives, they added.

EC Focused on Green Hydrogen but Still Role for Blue in EU: Simson

"Our focus is renewable hydrogen, because it brings the biggest added value: it is fully emission-free [and] it helps manage our electricity system," Simson said during a visit to the 10 MW Refhyne electrolyzer project at Shell's Rheinland refinery in Wesseling, Germany.

The EU has "global leadership" in producing electrolyzers, Simson said.

But "in order to scale up demand for green hydrogen, we need to take industry on board and they need security of supply," she said.

This means other types of low-carbon hydrogen could be used to help develop both a hydrogen economy and the EU's transition to climate-neutrality by 2050, she said.

Low-carbon "blue" hydrogen is produced from natural gas via steam methane reforming and carbon capture and storage, or via pyrolysis.

Get the latest news, analysis and multimedia featuring S&P Global Platts insights on hydrogen and its current and future role in the global energy mix.

READ MORE ON THIS TOPIC

Why Gas Utilities Could Get Left Behind in the Hydrogen Economy

Natural gas utilities could find themselves largely observing the rise of the U.S. hydrogen economy from the sidelines, according to a consultant who closely follows the emerging renewable hydrogen market.

The gas industry envisions a future in which local distribution companies, or LDCs, decarbonize heating by delivering a blend of renewable hydrogen and natural gas to utility customers, energy consultant Tom Russo said during an Aug. 25 webinar hosted by the U.S. Association for Energy Economics.

But a lack of government and regulatory support at the state and federal level as well as technical challenges unique to LDCs could leave gas utilities with a marginal role in the hydrogen economy, Russo warned.

The nascent business venture is now moving aggressively toward construction of the hydrogen plant with plans to break ground in Kern County, California by the fourth quarter. A startup to production is tentatively planned for early 2021.

Ways2H and its EPC partner plan to build the first modular and transportable waste-to-hydrogen production facility in the US, with a pipeline of additional projects to follow in 2021. 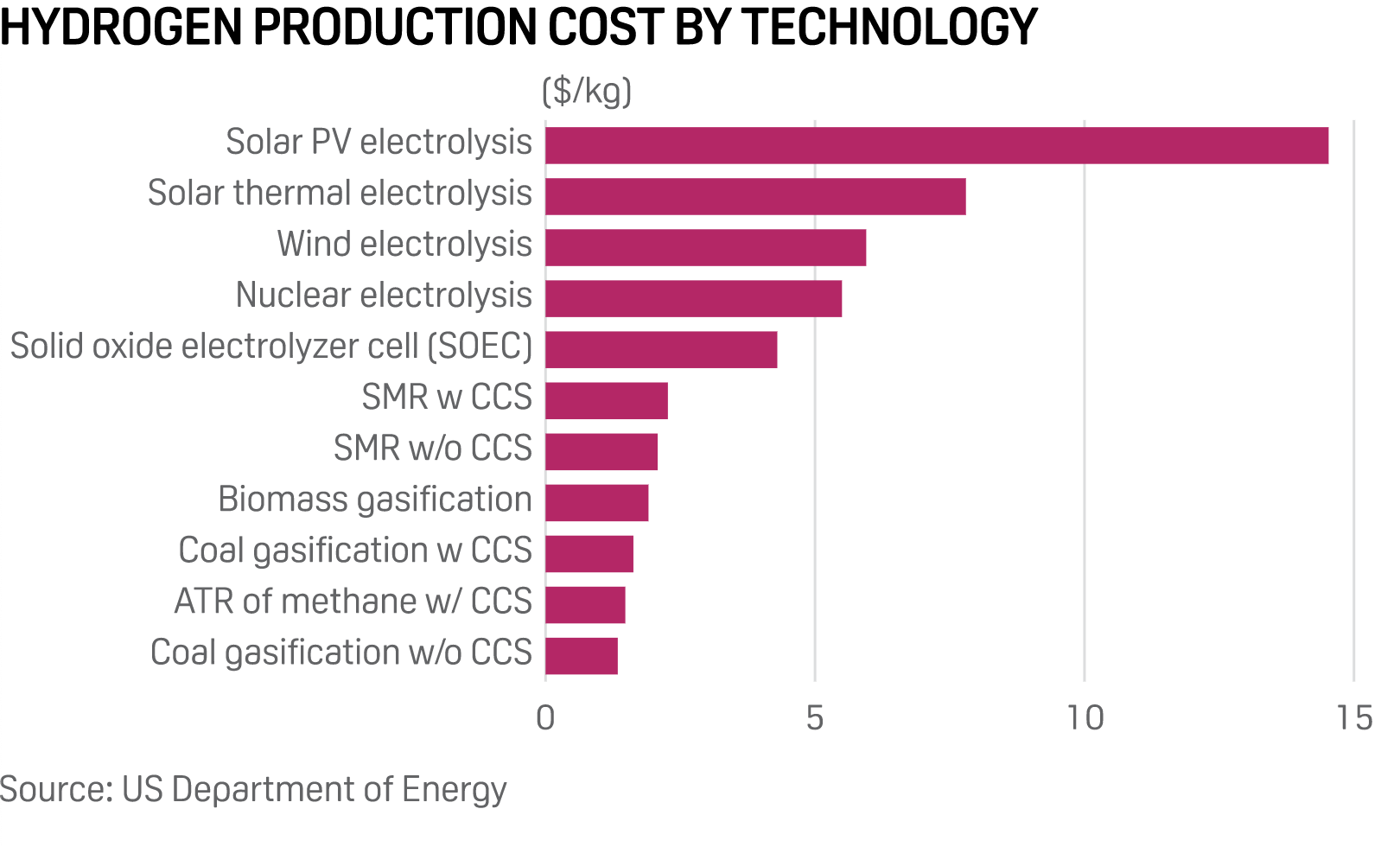 Natural Resources Canada confirmed June 7 it is developing a national hydrogen strategy, joining a number of countries in doing so.

"We are seeking to identify opportunities for clean hydrogen production and optimal end-use across the economy, in the short, medium, and longer term, while also identifying export market growth potential for Canadian clean hydrogen, as well as hydrogen and fuel cell technologies and services," said the agency in a statement emailed to S&P Global Platts.

The federal agency said it is working with governments at all levels as well as academia and the private sector to inform the strategy's development.

Australian iron ore producer Fortescue Metals Group has inked another agreement on hydrogen in a bid to potentially scope out a new export opportunity and decarbonize its Western Australian operations.

The Perth-based miner said Aug. 20 that it had signed a memorandum of understanding with South Korea's Hyundai Motor Company and Australia's main research body, the Commonwealth Scientific and Industrial Research Organisation, or CSIRO, to collaborate on renewable hydrogen technology.

Fortescue said the collaboration would look specifically at "developing and commercializing" metal membrane technology, or MMT, which has been developed by the CSIRO.

China might lead the world in battery vehicles, but until recently it was a relative laggard in hydrogen. Now, it’s catching up.

Edgare Kerkwijk spoke to S&P Global Platts Senior Editor Sambit Mohanty on how hydrogen is garnering attention among policy makers and industry leaders in Asia as the region prepares for energy transition. Kerkwijk is a member of the board of the Asia-Pacific Hydrogen Association, a regional industry platform that aims to promote the interests of the hydrogen sector. Its members include utilities, power project developers, equipment manufacturers, technical consultants and financial institutions.

Countries in the Asia-Pacific region, such as India, Japan, South Korea, China and Australia, are planning to set up projects as well as speed up policy formulation, as they step up efforts to make hydrogen a part of their energy mix.

While most hydrogen exists in its molecular or compound forms, such as in water and organic fossil fuels, increasingly, hydrogen molecules are being looked upon as a potential energy carrier. Hydrogen can be produced from a wide array of pathways and feedstocks. But three pathways have garnered attention -- steam methane reformation, biomass reformation, and electrolysis. Japan's ENEOS and JERA jointly launched Aug. 25 one of the country's largest hydrogen stations on the site of the latter's operated Oi thermal power plant in central Tokyo, with the utility supplying feedstock city gas for the production of hydrogen.

Peter Godfrey, Asia Pacific Managing Director of The Energy Institute of the UK, joins S&P Global Platts Senior Editor Sambit Mohanty in this episode of Commodities Focus Podcasts to tackle the questions around the development in Asia's hydrogen market.

From IOC to Reliance: India's Hydrogen Ambitions Get Stronger by the Day

India's push toward embracing hydrogen is gaining speed as some of the country's top energy companies, such as Indian Oil Corp., Reliance Industries and Adani Group, are increasingly highlighting the urgency to move toward the carbon-free fuel, which may have an edge over other non-fossil fuel sources.

The plant may enable future use of pure hydrogen in both blast furnaces, after the group gains experience in using the fuel.

Russian and German businesses have proposed an expansion of energy ties and the construction of a hydrogen production plant, the German-Russian Chamber of Commerce said July 7.

"Russia and Germany should take advantage of years of their successful partnership in the oil and gas industry to closely cooperate in the development of hydrogen, climate-friendly technologies for the future," the proposal sent to relevant ministries of both countries said.

As a pilot project, the two countries should start by building a hydrogen production plant, Matthias Schepp, the head of the chamber of commerce, said.

With talks proceeding well with the government on issues on a new hydrogen chapter in France's Energy Code, including traceability via certificates of origin, the association hoped an original deadline of November 2020 would be met without needing a four-month extension allowed as a result of Covid-19.

Germany needs to add some 5 GW of solar and 3.7 GW of onshore wind capacity each year to achieve its 2030 target of renewables having a 65% share in the power mix, utility lobby group BDEW said Aug. 24.

Clean hydrogen, renewables, batteries, and carbon capture and storage are among the energy transition technologies set to benefit from billions of euros of public funding as the EU seeks to become climate neutral by 2050.

Shifting Plans in the UK

The UK's official advisory body on climate change has urged the government to speed up planning for a post-pandemic economic recovery, setting out a range of recommendations to achieve a net-zero emissions target sooner while protecting the economy from future climate shocks.

In its annual report on emissions reductions to parliament on June 25, the influential Committee on Climate Change said emphasizing green investments, including on energy networks and new technologies such as green hydrogen, could speed up progress on climate targets and position the UK as an international leader on climate action ahead of the COP26 climate summit in 2021.

Norway's Equinor said July 1 it is leading a project in the UK to develop one of the world's first "at-scale" facilities to produce hydrogen from natural gas in combination with carbon capture and storage (CCS).

The project, called Hydrogen to Humber Saltend (H2H Saltend), supports the UK government's aim to establish at least one low-carbon industrial cluster by 2030 and the world's first net-zero cluster by 2040.

It will be located at Saltend Chemicals Park near the city of Hull and its initial phase comprises a 600 MW auto thermal reformer (ATR) with carbon capture, the largest plant of its kind in the world, to convert gas to hydrogen.

Capital shortfalls and government inaction threaten renewable hydrogen projects with even a high level of deployment insufficient to meet demand projections for the decarbonized energy carrier, sustainable energy think-tank the Institute for Energy Economics and Financial Analysis (IEEFA) said in a report Aug. 24.

IEEFA estimated some 50 viable renewable hydrogen projects had been announced globally in the past year with a production potential of four million mt per year H2 via 11 GW of electrolyzer capacity and 50 GW of renewable capacity. In total the projects would need investment of $75 billion.