A greater share of this debt is from nonfinancial companies ($7.1 trillion) than from financial services issuers ($2.2 trillion).

The 'BBB' category is the largest by debt amount, with nearly $3.8 trillion, 77% of which is from nonfinancial companies.

May. 17 2019 — Outstanding debt instruments from U.S. companies account for 48% of global corporate debt. Tightening financing conditions contributed to a 24% decline in U.S. corporate bond issuance in 2018. However, even with these headwinds, the level of U.S. corporate debt grew by 3% during the year, and this increase was in line with global credit growth. 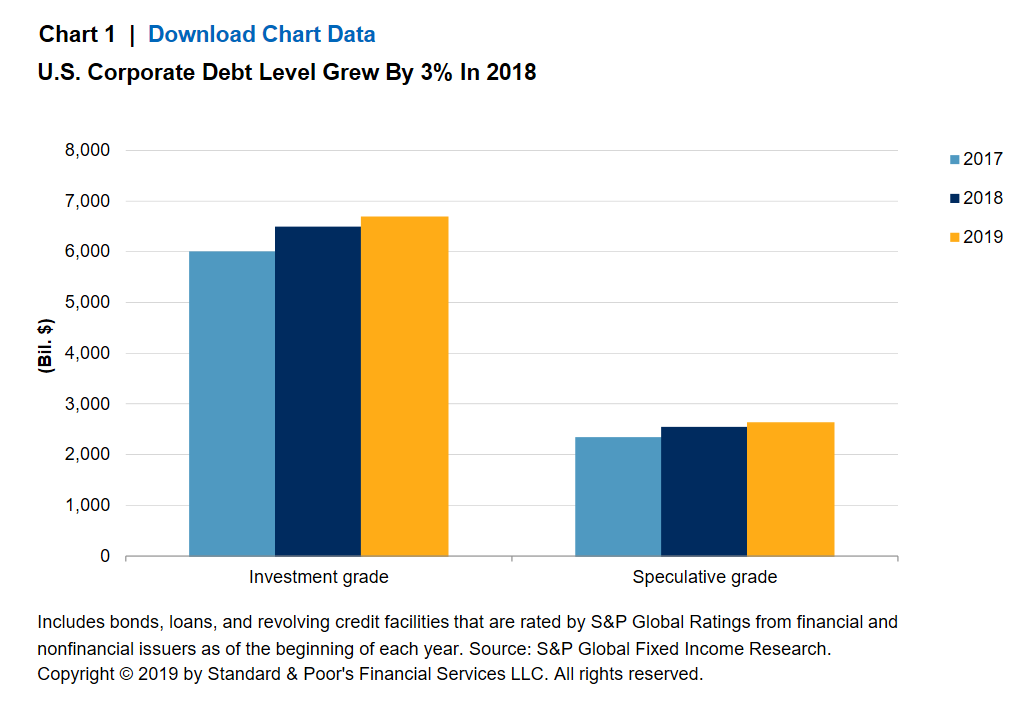 For this report, we looked at the state of play of the U.S. corporate credit market in 2019 by estimating the dollar-equivalent volume of currently rated debt and segmenting by rating, sector, instrument type, and other variables. We show the rating distribution by the dollar amount of currently outstanding debt, whereas we typically report on the distribution by issuer count in many of our other reports. Chart 2 compares rated debt by dollar amount of outstanding debt instruments with the number of rated issuers, and the appendix includes the distribution of global corporate ratings by issuer count over time. 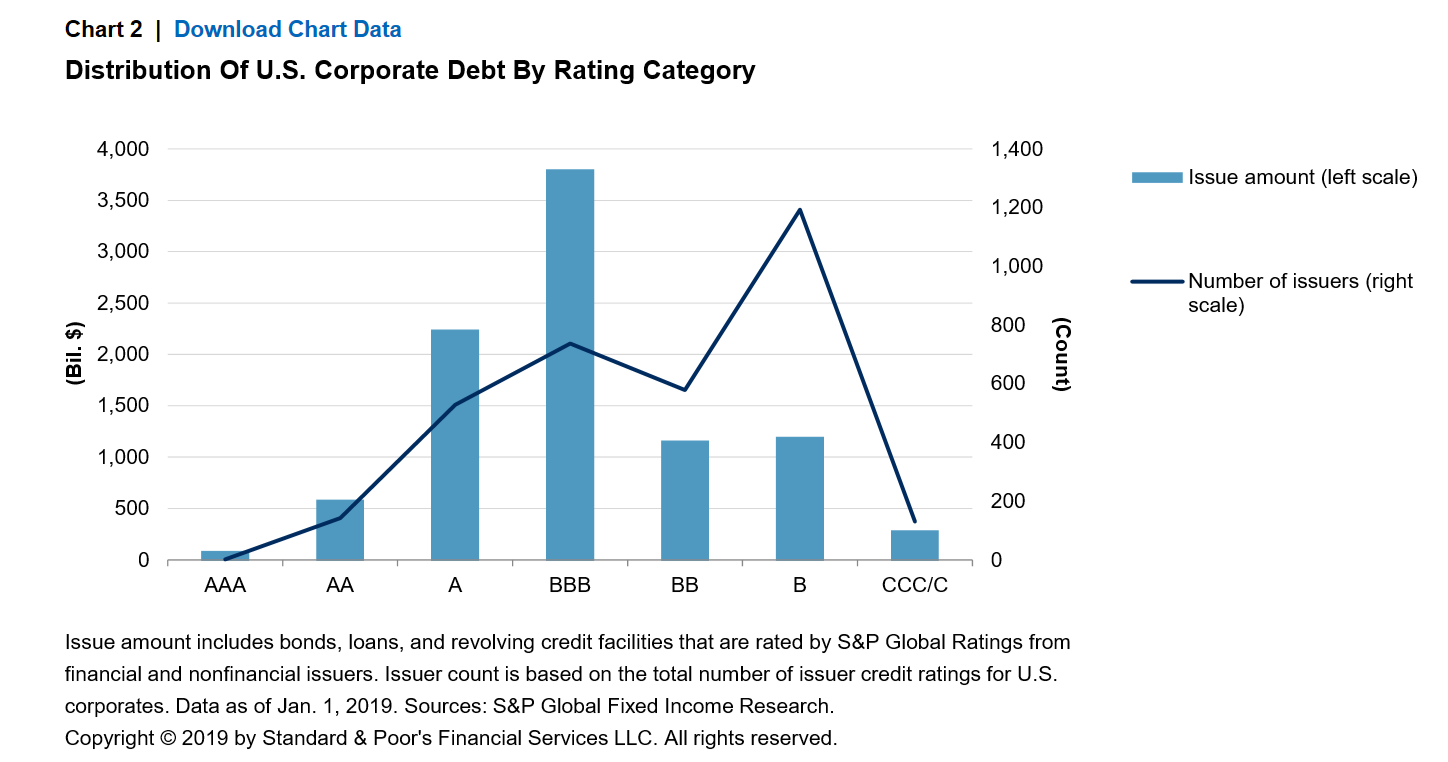 The nonfinancial sectors with the largest amounts of rated corporate debt are high technology ($899.7 billion), utilities ($855.1 billion), and telecommunications (with $752.9 billion). The amount of debt associated with the high technology sector has grown steadily in recent years, and the amount of U.S. corporate debt from this sector grew by 11% in 2018. About 66% of the sector's debt is investment grade, and this includes debt from some of the largest companies in the U.S., such as Apple Inc. and Microsoft Corp.

Financial institutions--including banks, brokers, asset managers, and finance companies--account for most of the debt within the financial services sector, while insurance companies cover only 22% of it.

By debt type, $7.2 trillion of currently outstanding U.S. corporate debt is in the form of bonds and notes, while about $2.1 trillion debt is in form of revolving credit facilities and term loans (see Table 3). Term loans constitute a considerably higher share of funding for speculative-grade companies, nonfinancials in particular. Loans and revolvers account for more than half (55%) of speculative-grade debt and less than 10% of investment-grade debt.

Bonds typically are issued with longer maturities than loans, and currently outstanding loans have a shorter maturity profile on average than bonds. By instrument type, 67% of loans are scheduled to mature through 2023 compared with 45% of bonds. Investment-grade nonfinancial entities tend to issue debt with longer maturity terms than do speculative-grade companies. About 38% of investment-grade bonds were issued with original maturities of 13 years or more compared with 6% of speculative-grade bonds (see Table 4).

The median tenor at issue of a speculative-grade loan to a nonfinancial firm is 6.5 years, while the median tenure of a speculative-grade bond at issue is 8.1 years. Agreements on revolving credit lines are usually of five to six years. Companies often refinance loans three or four years after issue, though this largely depends on credit market conditions and liquidity.

Financial services companies have a median tenor of 10 years (at issue) for bonds. At original issue, the largest share 40% of financial services debt had maturities of seven to 13 years, and 37% had original tenors of seven years or less (see Table 5).

For this study, we included companies incorporated in the tax havens of Bermuda and the Cayman Islands with the U.S. region. Nearly all (97%) of the debt covered in this study is from companies incorporated in the U.S., while $262 billion in debt is from issuers incorporated in the tax havens. This debt shows some notable concentrations by sector, as the high technology, homebuilders and real estate, and telecommunications sectors together account for nearly 44% of this debt from tax havens. In both the high technology and the homebuilders and real estate sectors, much of this debt belongs to issuers that operate primarily in China but were incorporated in the Cayman Islands, where they could gain more access to sources of external funding through global debt and equity markets.

For the U.S. region (including Bermuda and the Cayman Islands), we included the rated debt of all U.S. companies and their foreign subsidiaries. We counted the debt of all of these companies regardless of the currency or market in which the debt was issued. We converted any non-U.S.-dollar-denominated debt to U.S. dollars based on the end-of-day exchange rates on Jan. 1, 2019. Unless otherwise noted, we did not include in our totals debt issued by foreign companies in the U.S. market or debt issued by U.S.-based subsidiaries of foreign companies.

We aggregated the data by issue-level credit rating. We also aggregated sector-specific data according to the subsector of the issuer. The financial sector is defined as all banks, brokers, insurance companies, asset managers, mortgage companies, and other financial institutions. We aggregated debt issued by financial arms of nonfinancial companies with the sector of the corporate parent. We excluded government-sponsored agencies, such as Fannie Mae and Freddie Mac, and public finance issuers. 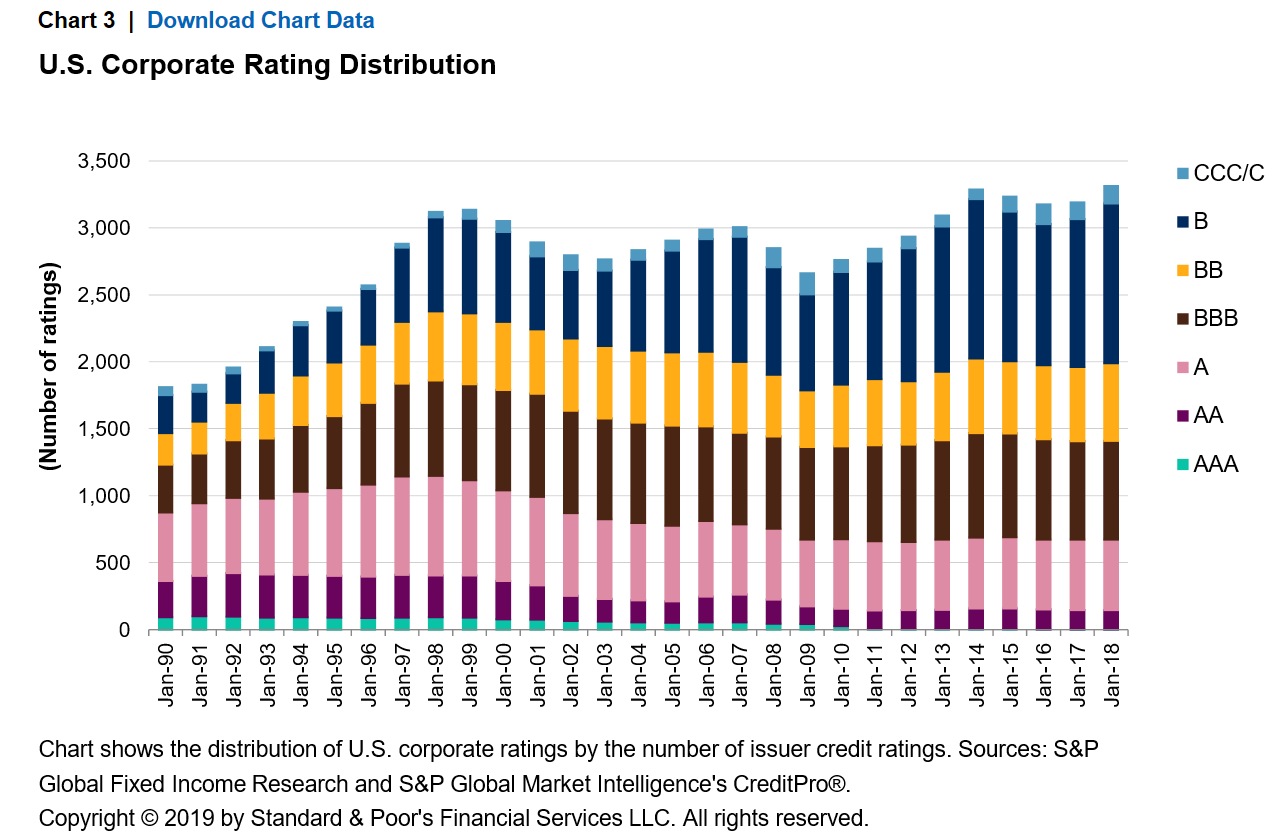