I ndia's ambition of sustaining its relatively high growth depends on one important factor: infrastructure. The country, however, is plagued with a weak infrastructure incapable of meeting the needs of a growing economy and growing population. S&P Global Ratings projects India's GDP to grow around 8% for the next three fiscal years, among the fastest in large, growing economies. The government also aims to significantly boost the manufacturing sector to contribute an all-time high of about 25% of GDP by 2025, from below 16% currently.

India is striving to improve its manufacturing competitiveness at a time when manufacturing powerhouse China is shifting toward consumption-led growth. China now faces the risk of overcapacity in segments such as port and power. For India, on the other hand, its road to sustainably higher growth and a competitive manufacturing sector goes through robust and reliable national infrastructure, especially in power and transportation.

In our view, poor infrastructure is among the biggest hurdles facing the Indian government's ambitious program, called "Make in India," which aims to improve the nation's manufacturing capabilities and support higher growth for generating employment. We believe corporate growth and investments can be hampered if the government fails to close the infrastructure deficit, which some experts estimate costs about 4%-5% of GDP due to inefficiencies. Infrastructure development can not only help remove some of these inefficiencies contributing immediately to economic expansion but also support stronger long-term growth.

India's power infrastructure, traditionally a weakness, seems to be turning a corner, but transportation infrastructure still faces overwhelming capacity constraints. We believe execution capability will remain the biggest challenge for transportation infrastructure projects based on lessons learned from the power sector. The government has to lead by example by spending first and demonstrating the ability to execute projects. Sustained policy improvements, confidence in sustainability of economic growth, and infrastructure development will be essential to attract otherwise muted private sector investments.

We believe adequate funding should be available for commercially viable projects as contractors' financial health improves, capital markets gain greater confidence in the contractors' execution capabilities, and banks improve capital adequacy and appetite for infrastructure lending. We believe careful project selection and appropriate risk premiums by developers and financiers to build in healthy skepticism on secular growth (even if India appears to be the fastest growing large economy--for now) would be essential for sustained infrastructure development. Infrastructure may yet again be India's stumbling block, or if done right, it could be the key to achieving the country's economic potential.

Infrastructure Development Can In Turn Support Demand For Other Industrial Sectors

If successful, higher infrastructure development will have a long-term positive impact on all sectors. However, in the short to medium term, the impact will vary for different sectors.

Weak Infrastructure Is A Key Impediment To Improving Manufacturing Competitiveness

India's infrastructure bottleneck is a primary constraint to improving (or even maintaining) its global competitiveness, as measured by The World Economic Forum's study on Global Competitiveness Report for 2015-2016. India is ranked at No. 55 out of about 140 countries. Its relatively poor quality power and transportation infrastructure contribute to that weaker position compared to Asian peers like China (No. 28), Thailand (32) and Indonesia (37). However, quality of infrastructure is also a relative weakness for China. 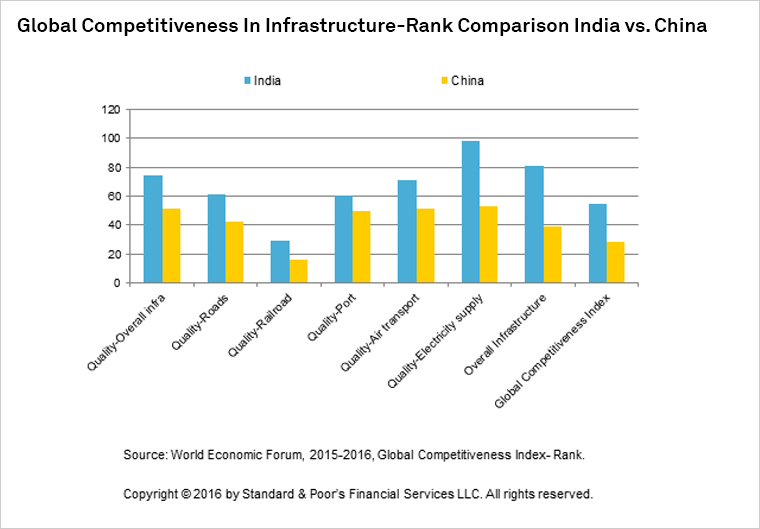 Logistic costs in India (about 15% of GDP) and China (18%-20%) are both well above the average for developed economies (5%-10%). For China, we consider toll collections, fuel taxes, and inter-province protectionism as the key reasons for the higher costs. In India, they likely reflect inadequate transportation infrastructure and a multitude of taxes across states, which results in costly and inefficient movement of goods. We believe the proposed uniform goods and service tax (GST) in India, which aims to remove the cascading effect and inefficiencies created by different layers of taxes across states and the central government, can significantly benefit manufacturing competiveness. While the GST should be favorable for most sectors, we expect the logistics and manufacturing sectors to be among the biggest beneficiaries.

Power Infrastructure Is Improving But Distribution Remains A Weakness

India's electricity generation and transmission sector is turning a corner. India expects to have its first-ever power surplus in 2016-2017 after being plagued with double-digit peak demand deficits for much of last decade. However, quality and stability of supply still need significant improvement, given brown-outs that affect the industrial sector.

The transmission sector is also witnessing strong commissioning activity and increasing private participation (projects of US$15 billion are being awarded by the government on competitive bidding). Underpinning these investments is a supportive regulatory framework that ensures adequate returns on completed projects.

The domestic coal supply has also improved significantly with adequate supply from Coal India Limited (unrated), which reduces dependence on costlier imports. We expect these factors to continue over the medium to long term and support the power sector's credit quality.

India will, however, need to carefully manage capacity additions to remain in line with demand and avoid overcapacities like China has seen in recent years due to its economic slowdown. Large capex needs to be executed with discipline because significant lead time for completing projects and land-related issues could create problems as returns on invested capital flow only after a plant is commissioned. The power sector has successfully attracted significant private sector investments, particularly in the fast-growing transmission and renewable sector recently, though competitive bidding could squeeze returns.

We believe the government's UDAY scheme (for Ujwal Discom Assurance Yojana, which aims to improve financial health and operational efficiency for state-owned distribution companies) is a practical approach to bolster perennially weak state distribution utilities, which have accumulated losses of over US$55 billion as of March 2015. Some states are realizing benefits of cheaper funding with state government support. However, reducing aggregate technical and commercial losses, distribution losses, continuing budget discipline from states, and banks' readiness to lend at lower rates in the future will determine whether UDAY ultimately succeeds in fixing the weakest link in India's energy chain, the distribution sector.

Transportation infrastructure could significantly benefit from a stable regulatory environment with an independent regulator and supportive, comprehensive policies, in our opinion. These factors underpin the credit strength of the power generation and transmission sector. Tariff disputes and in some cases a lack of independent dispute-resolution mechanism have harmed the financial health of some transportation infrastructure developers. In contrast to the highly stable regulations for transportation infrastructure sector globally and in the Asia-Pacific region, we see such regulations as a relative weakness in India. This also creates higher volatility for the cash flows of Indian companies in a sector where cash flows generally demonstrate low volatility.

As in China and other developing nations, India's infrastructure systems and networks also need to keep pace with population growth to enhance economic expansion. Although India's gross fixed capital formation is healthy at 30%-35% of GDP, it has significantly lagged China's since 1990. China has an unusually high level of investment, which S&P Global Ratings expects to remain so, at above 40% of GDP, despite the Chinese government's move toward consumption-led growth. 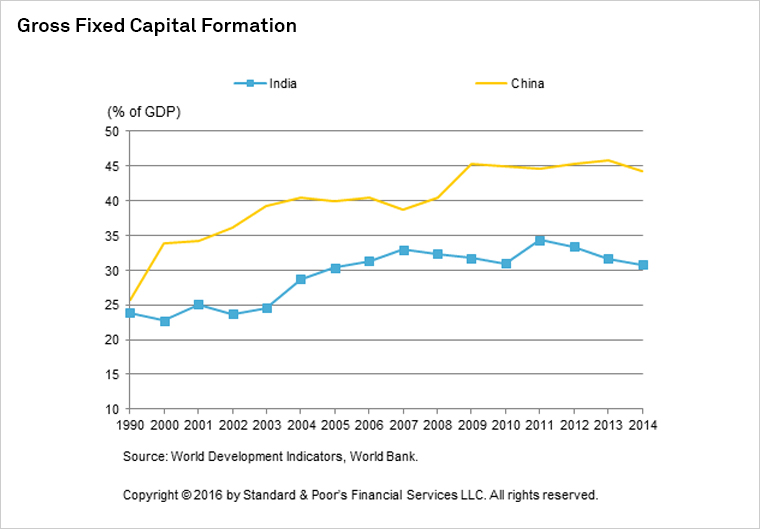 China faced similar challenges regarding funding and contractual enforcement in the 1980s and 1990s as India has been facing for much of the last decade. The Chinese government was open and flexible, initially attracting private and foreign investors through innovative contracts and concessions that essentially guaranteed a return on investment. Subsequently, it increasingly shouldered the responsibility of infrastructure development with support from banks (largely state-owned).

India needs resolute commitment to infrastructure development, and in our opinion, that will require flexible policies and the ability to manage timely execution on an unprecedented scale. We believe private sector investments will flow as the government's willingness to make projects commercially viable and to share the risks of the projects (like land acquisition) becomes clearer. Otherwise, the private sector will be left to grapple with risks that it has been unable to manage or price appropriately in the past.

In addition, many experienced developers are still trying to overcome financial problems from earlier underperforming or stranded projects. Banks and capital markets will support financially viable projects but perhaps not immediately, given developers' weak financial position and banks' own problems stemming from rising nonperforming loans (including from the infrastructure and power sectors), tighter provisioning, and higher capital requirements.

Infrastructure development in India is as much a prerequisite for maintaining current growth as it for driving higher future growth. Resolving land acquisition issues and implementing the GST are two big national reforms that could have significant positive impact on infrastructure development, economic growth and improvement in India's manufacturing competitiveness.

We believe lower labor costs alone aren't enough to bolster India's manufacturing competiveness. It will be sustainable only with adequate national infrastructure, which currently is lacking. A vibrant manufacturing sector supported by infrastructure development will be crucial if India is to reap the demographic dividends of gainfully employing the large young population. But, in our view, improving labor productivity and providing ample employment opportunities will be additional challenges.

India's domestic-focused economy is less vulnerable--though not immune--to global economic shocks, so we expect it to register relatively higher growth. Falling interest rates, benign commodity prices, and government rhetoric about improving the business climate are already generating interest from domestic and foreign investors. India remains an attractive investment destination given global economic sluggishness. Initial hesitation to invest can be allayed if the government can match its rhetoric with action and demonstrate an ability to execute much-needed infrastructure projects, provide stable and supportive policies, and--most important--focus on economically feasible projects.