Spotlight on Japan: How Carbon-Efficient Indices Can Shape the ESG Landscape

The latter is achieved by assessing the carbon performance of companies (based on GHG emissions data from Trucost), sorting them into deciles within GICS® industry groups, and reweighting accordingly. However, since some industries are inherently more GHG emitting than others, our methodology considers the spread of possible emissions within an industry group, and increases or decreases company weights by either a greater or lesser extent depending on how much a company can feasibly improve given current available technologies. For example, a highly carbon-efficient energy company in the top decile of the broad-ranging Energy industry is likely to be far ahead of its peers and, thus, deserves a significant weight increase of 120%. Conversely, a media company in the top decile of the smaller-ranging Media industry only receives a small weight increase of 20%, as it is only slightly ahead of its peers. Vice versa, a high-emitting Energy company in the bottom decile would get a weight reduction of 90% versus just 15% for a Media company in the same position (see Exhibit 1). As such, companies are incentivized to both disclose and decarbonize to boost their overall standing—to the extent that they are able to. 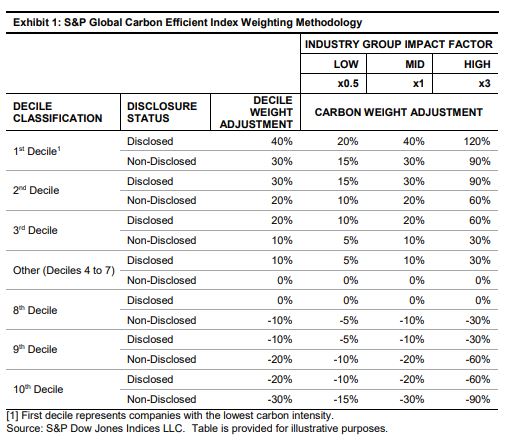 The S&P Global Carbon Efficient Index Series is designed to measure financial markets worldwide and offers market participants the opportunity to reduce their exposure to carbon risk. The methodology is also sector neutral, amounting to a carbon reduction of 20%-50% relative to the benchmarks, with less than 0.55% of tracking error and comparable returns, thereby demonstrating that there need not be an inherent trade-off between investment performance and decarbonization. In theory, the carbon performance of the S&P Global Efficient Carbon Index Series should further improve over the long term, as companies adapt their behavior and as the indices continue to grow in popularity among market participants. Indeed, our initial results to date suggest that they are already heading in that direction.

Perhaps the most interesting result, however, is that there was a significant boost in the number of companies disclosing their carbon emissions in 2019, in large part due to the GPIF’s selection of this innovative index series—with an additional 113 GHG-disclosing companies around the globe, 33 of which are based in Japan. Another interesting result is that the dispersion of the spreads of GHG emissions across GICS industry groups, upon which the weight adjustments are based, is stabilizing. There were no major changes to the classification of GICS industry groups as either “high,” “mid,” or “low” impact: defined by the spread of carbon emissions, where the bigger the spread, the higher the impact, and the larger the resultant index weight adjustments, and vice versa (see Exhibit 1). However, there was just one exception: the Commercial & Professional Services industry group, which moved from “high” to “mid” impact, suggesting that the GHG-emissions intensities of companies within that industry group are already beginning to converge.

Now, more than ever, market participants acknowledge that the impacts of climate change on their investments cannot be ignored. But while institutional investors often claim the importance of low-carbon and ESG investment approaches in general, it can be difficult for them to engage in these strategies due to their commitment to closely track market returns. The S&P Global Carbon Efficient Index Series demonstrates that it is possible to target meaningful carbon reduction and incentivize systemic behavioral change, while at least maintaining the beta coefficient. For example, the S&P/JPX Carbon Efficient Index had almost the same level of risk and return as the TOPIX, its benchmark index. As such, investors that allocate to the TOPIX could benefit from reducing their carbon exposure without compromising their fiduciary obligations. Indeed, the S&P Global Carbon Efficient Index Series offers market participants across the globe— who might otherwise be concerned with balancing their fiduciary responsibilities with sustainable investment returns—a convenient pathway for addressing climate risks.