Asia is set to benefit from IMO 2020 more than most other regions due to its surplus of gasoil and the relatively high complexity of its refineries.

China and India are well-placed to benefit from the bunker spec change with their high ratios of coking and hydrocracking versus crude distillation capacities.

Japan as the major LSFO producer and South Korea as a large gasoil exporting country will also stand to benefit from high distillate cracks.

The upcoming change in global standards for marine fuels will transform oil product flows. Asia is well placed to capitalize on the shift, despite the challenges of rising costs and oil prices, write JY Lim and Kang Wu of S&P Global Platts Analytics

Despite all these challenges, Asia is set to benefit from IMO 2020 more than most other regions due to its surplus of gasoil and its relatively high complexity of refineries. Asian refiners have continued to upgrade, allowing them to achieve greater yields of valuable lighter products and strip out sulfur. This will set them on a better footing to adjust for IMO 2020. 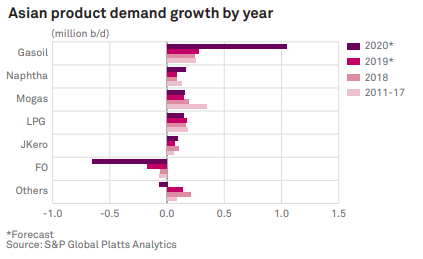 Singapore, as the world’s largest bunkering hub, will have to make major changes. Singapore’s product demand composition will undergo a drastic change, with HSFO demand dropping in 2020 while demand for MGO and LSFO rises. Market participants are keeping an eye on how Singapore will gear up to meet its bunker demand. Singapore is the world’s largest bunkering market and today imports huge volumes of HSFO.

Since 2000, Asian refiners have added substantial volumes of refining capacities as well as upgrading capabilities. In fact, the region has been adding conversion capacities more rapidly than crude distillation units (CDUs) over the past few years

The higher conversion and HDS ratios in the region will enable refineries to have more flexibility in terms of their choices on crude slates, and more fuel oil will be converted into valuable lighter products. Asian refineries are now on a better footing to make changes to meet IMO 2020 bunker specs. 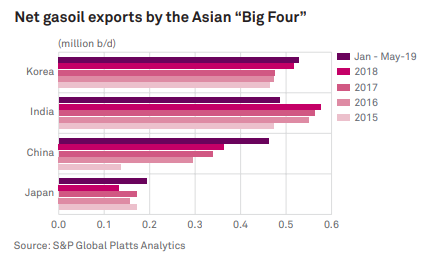 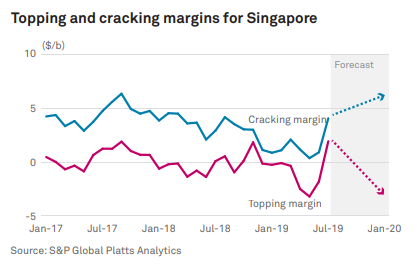 Japan’s exports, however, are expected to be slightly higher this year on the back of further declines in domestic demand despite refiners’ possible cuts.

In effect, China is well-placed to benefit from the shift to IMO 2020, particularly with its experience from the early implementation of the new Emission Control Area (ECA) rules from January 1, 2019. The rule means that any vessel entering any port in China along the coast or entering internal waters must use bunker fuels with a sulfur content of no more than 0.5%. This is essentially the same quality specification as the broader IMO specification change set to go into force in 2020.

Singapore will be a major outlet when demand for marine gasoil picks up come 2020. However, given its long distillate position, China may take the opportunity to expand its own bunkering operations.

India is the largest regional net exporter of gasoil and a very minor net importer of fuel oil. Indian refineries are relatively well positioned to deal with challenges associated with bunker spec changes under IMO 2020 owing to their high level of coking and HCU capacity relative to FCC, which would allow refiners to produce more gasoil than gasoline. State-owned IOCL, for instance, has already carried out detailed tests to advance the production of low sulfur fuel oil compliant with IMO’s 2020 rule and aims to start supplying cargoes commercially from September 2019. 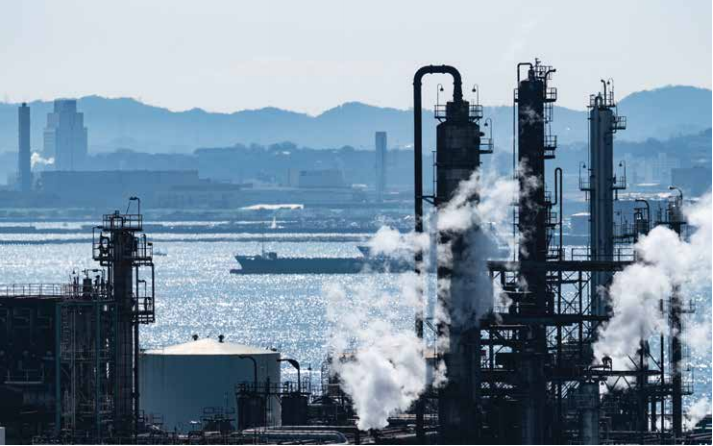 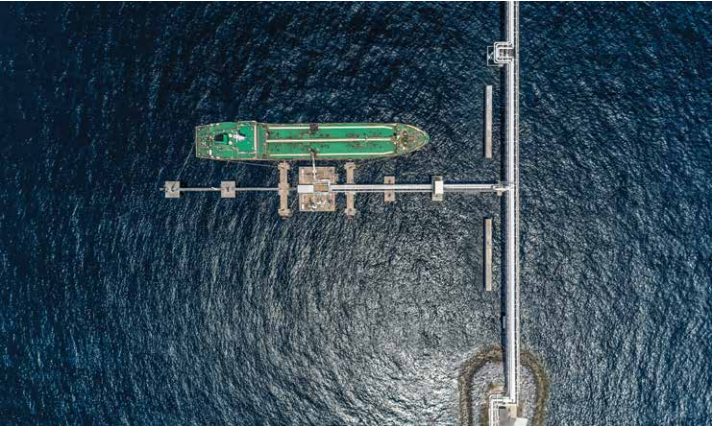