As market conditions evolve and prices increase, the global steel industry is prioritizing decarbonization as the pathway forward.

The steel market has endured unprecedented conditions due to soaring commodity prices and shortages of the metal itself, which has forced some market participants to focus on growing margins over volume and to reconsider their trade commitments. Many are watching activity in China, which is the world’s foremost producer of steel, alongside developments in the potential removal of the U.S.’s Section 232 tariffs on EU steel.

Against this backdrop, the industry’s decarbonization agenda and the buzz surrounding “green” steel are both gaining momentum as pathways to long-term growth as the market tightens. Many market participants anticipate challenges ahead—some doing so after years of planning.

Analysts estimate that steel production is responsible for approximately 9% of carbon emissions globally and 10%-20% of emissions in China, according to S&P Global Platts. But because of the technology currently available to remove coal from steel’s production process, S&P Global Market Intelligence found that many steel products made with that fossil fuel worldwide may be certified as “green” when that label should only be given to steel produced with electricity generated with renewables and with nearly zero greenhouse-gas emissions.

In China, an acceleration in steel production with a sluggish iron ore market has the potential to derail the country’s goal of peaking steel industry emissions by 2025 and reducing the industry’s emissions by 30% from that peak by 2030—alongside China’s broader, ambitious target of peaking overall emissions by 2030 and achieving carbon neutrality by 2060.

"China's crude steel production could be up 4%-7% this year, meaning the country's ability to meet its government target of limiting 2021 steel outputs to 2020 levels is unlikely without reform … As a result, China risks emitting an additional 158 million mt of CO2—the equivalent of the Netherlands' total emissions," Matthew Gray, an energy analyst at the non-profit TransitionZero, told S&P Global Platts. "China's central authorities have made good progress in reducing production in Eastern provinces, but more needs to be done in Central and Western provinces to meet their production target … With additional action, China could reduce emissions and show climate leadership in the run up to COP26."

In the U.S., which is the world’s largest importer of steel, the national steel industry is rallying behind the push for making electric vehicles readily available for mass markets, and are looking for additional immediate ways to engage in emissions-reductions efforts. Analysts interviewed by S&P Global Market Intelligence believe that companies that contribute the most emissions in the nation’s steel industry are looking to get ahead of any carbon tariffs that the Biden Administration may soon implement. However, U.S. steelmakers are still far from producing low-carbon or “green” steel at scale.

"Everybody is trying to appear green at the moment by putting big [environmental, social and governance] reports out and showing that they have the capability of producing green steel," Credit Suisse analyst Carsten Riek told S&P Global Market Intelligence. "What we're missing right now is real volume behind it."

Today is Tuesday, September 7, 2021, and here is today’s essential intelligence. 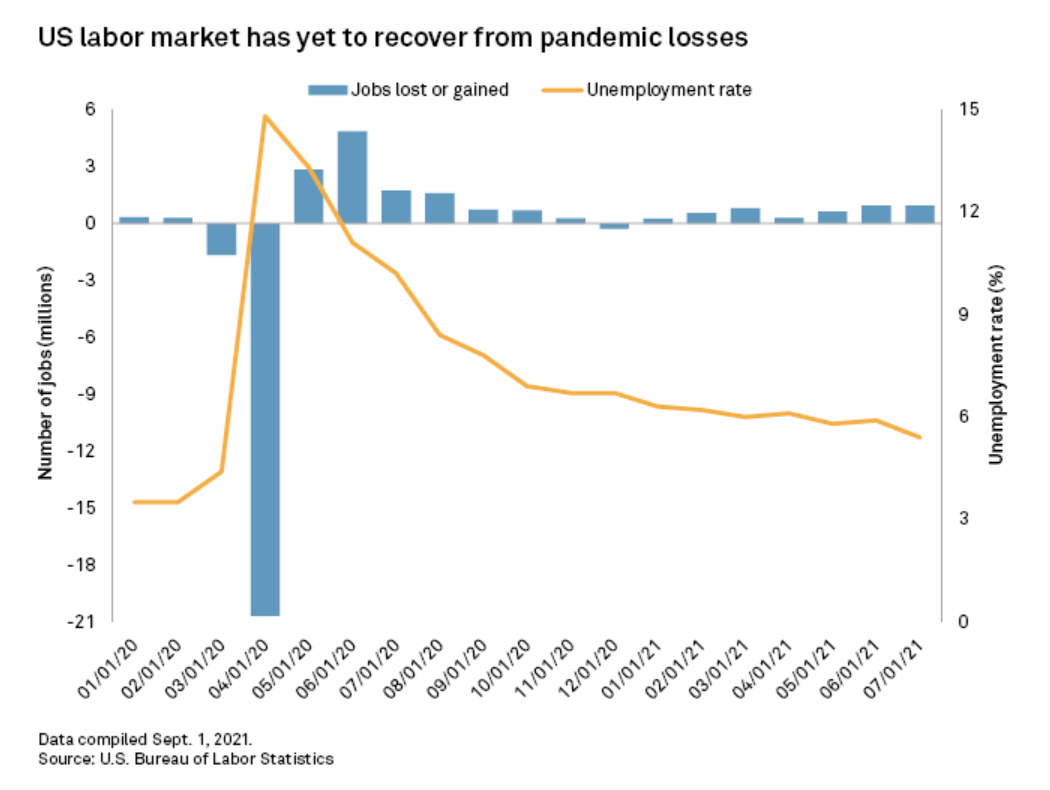 U.S. job numbers for August could determine when the Federal Reserve will start tightening its pandemic-era, ultra-loose monetary policy. Economists are already bracing for a potential slowdown in job growth from earlier this summer, according to data firm Econoday.

Oil demand markers in most of the world's biggest consuming countries recovered to hit a post-pandemic high in the final week of August, according to mobility data, suggesting key economies have bounced back from the outbreak of COVID-19's delta variant faster than expected. 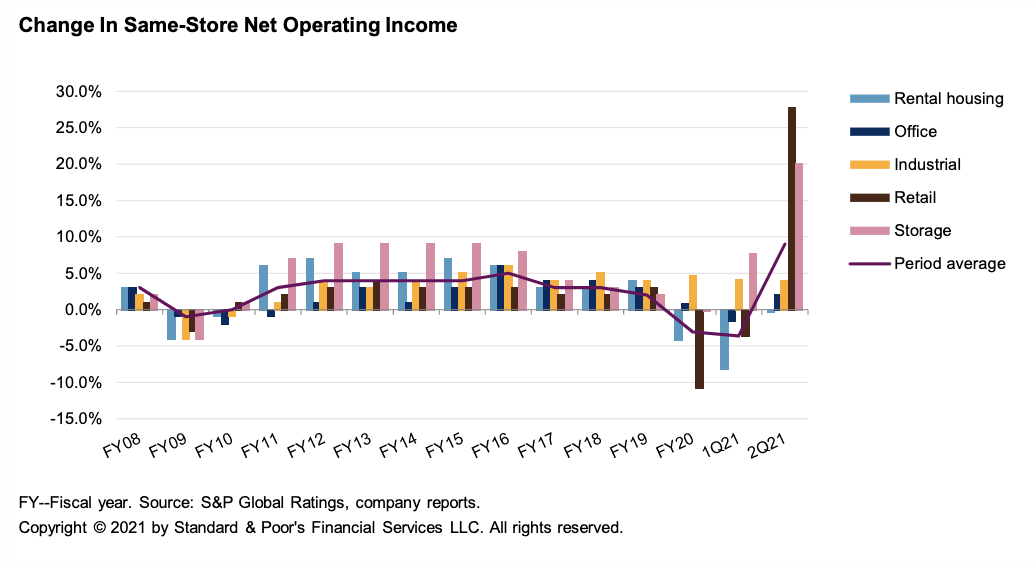 Earnings rebounded significantly in the second quarter demonstrating that REITs are on the right track for a solid comeback. The number of negative rating actions are easing up as operating performance and credit metrics recover and more rating outlooks are returning to stable. Low rates and recovering credit quality are keeping borrowing costs low and capital markets active, and REITs are positioned to grow again.

Ratings on more than 10% of global leveraged loan collateralized loan obligations (CLOs) were lowered in 2020 as the global pandemic and recession weakened credit quality. Despite credit deterioration, just one CLO tranche defaulted in 2020, down from three in 2019. 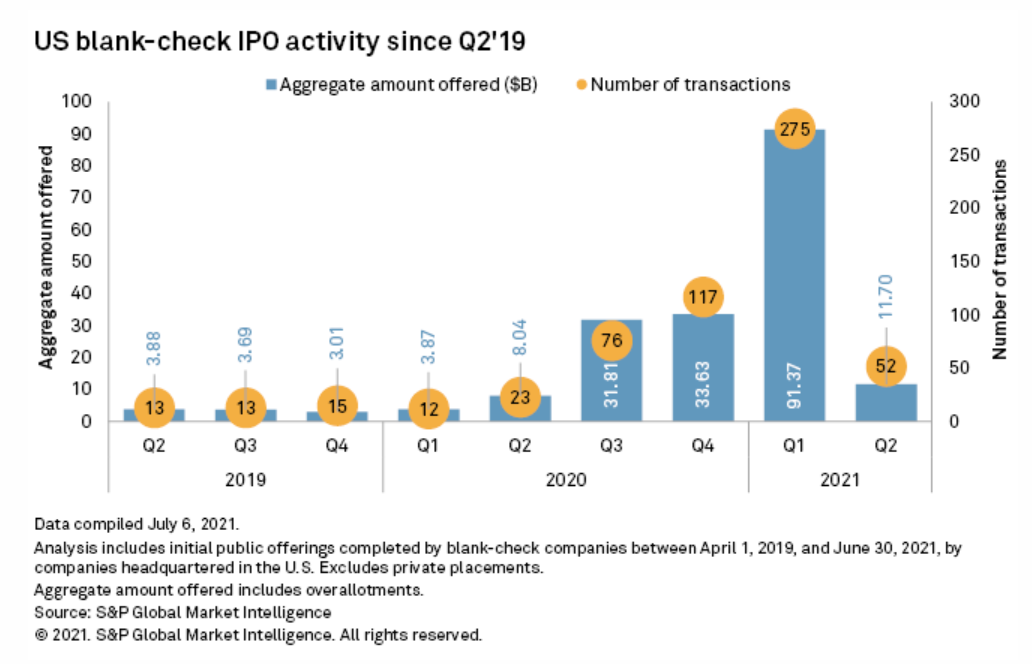 Investment bankers are bullish on the prospects of continued M&A activity even though regulators are creating some obstacles. The second quarter marked the third straight period in which total announced M&A value surpassed $1 trillion, according to S&P Global Market's Intelligence's latest M&A and equity offerings market report.

The S&P GSCI declined 2.3% in August, as industrial commodities retreated in line with a surge in COVID-19 cases attributed to the Delta variant, as well as signs that China intended to dampen industrial production to curb carbon emissions. In contrast, performance across the soft commodities was impressive, with a variety of production-related disruptions elevating the risk of lower supply.

Singapore Exchange Ltd. will allow special purpose acquisition companies, or SPACs, to list on its Mainboard from Sept. 3, seeking to tap investor demand for such blank-check companies in Asia. Potential SPACs will need to have a minimum market capitalization of S$150 million and must acquire a target company within two years of the initial public offering, Singapore Exchange said in a statement on Sept. 2. 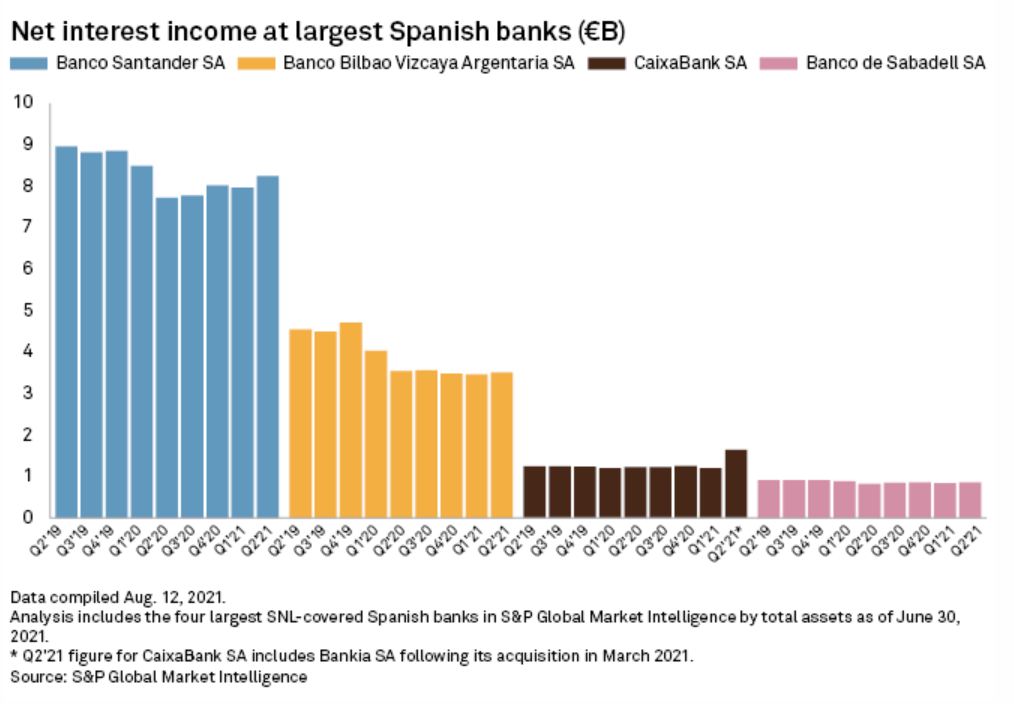 Amid the persistent low-rate environment, Spanish banks have boosted fee income and cut costs to alleviate pressure on interest income. Banco de Sabadell SA, Banco Bilbao Vizcaya Argentaria SA, CaixaBank SA and Banco de Sabadell SA, along with banks across the world, have been contending with low interest rates on the money they lend out, meaning net interest income — the difference between income earned on loans and interest paid on deposits — has declined over recent years.

Danske Bank Has Tools To Reach 2023 Target Despite Market Skepticism

Analysts are unconvinced Danske Bank A/S will reach its return on equity target of 9% to 10% by 2023, but they say it is not an impossible mission for Denmark's largest lender, which has multiple tools available to change its current course. Even if the bank falls short of its goal, its stock could still gain, according to one analyst.

Investment banks serving as advisers on Equity Commonwealth's planned acquisition of Monmouth Real Estate Investment Corp. stand to lose tens of millions of dollars in fees as a result of the deal's collapse. 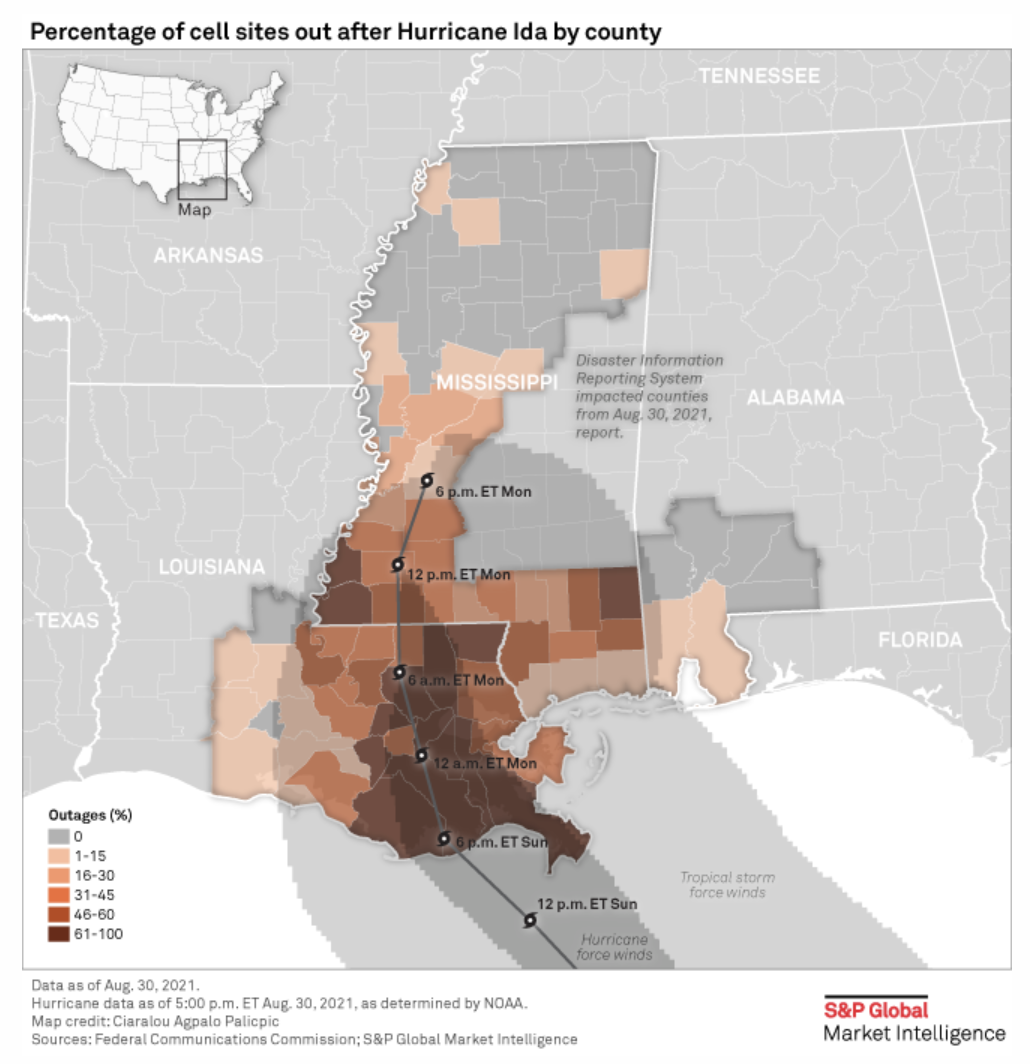 Wireless carriers are busily working to restore cell service in areas hard hit by Hurricane Ida, but power outages and flooding remain a hurdle. Over 1 million power customers are expected to be without power for weeks. About 12.7% of cell sites in the affected area remain out of service, with the greatest outages in Louisiana, the Federal Communications Commission reported Sept. 1.

The Media Rating Council has suspended accreditation for Nielsen Holdings PLC's national and local TV measurement services, opening the door for different data sets for buyers and sellers to begin to transact business on.

S&P Global economists currently expect U.S. GDP to grow 6.7% in 2021 and 3.7% in 2022. S&P Global Ratings updated its U.S. advertising forecast for 2021 and now expects advertising will grow by 14.4% (previously 7.8%), underpinned by strong 25% growth in the digital segment. Many ad-based media sectors continue to see sequentially improving advertising trends since the second-quarter 2020 bottom. 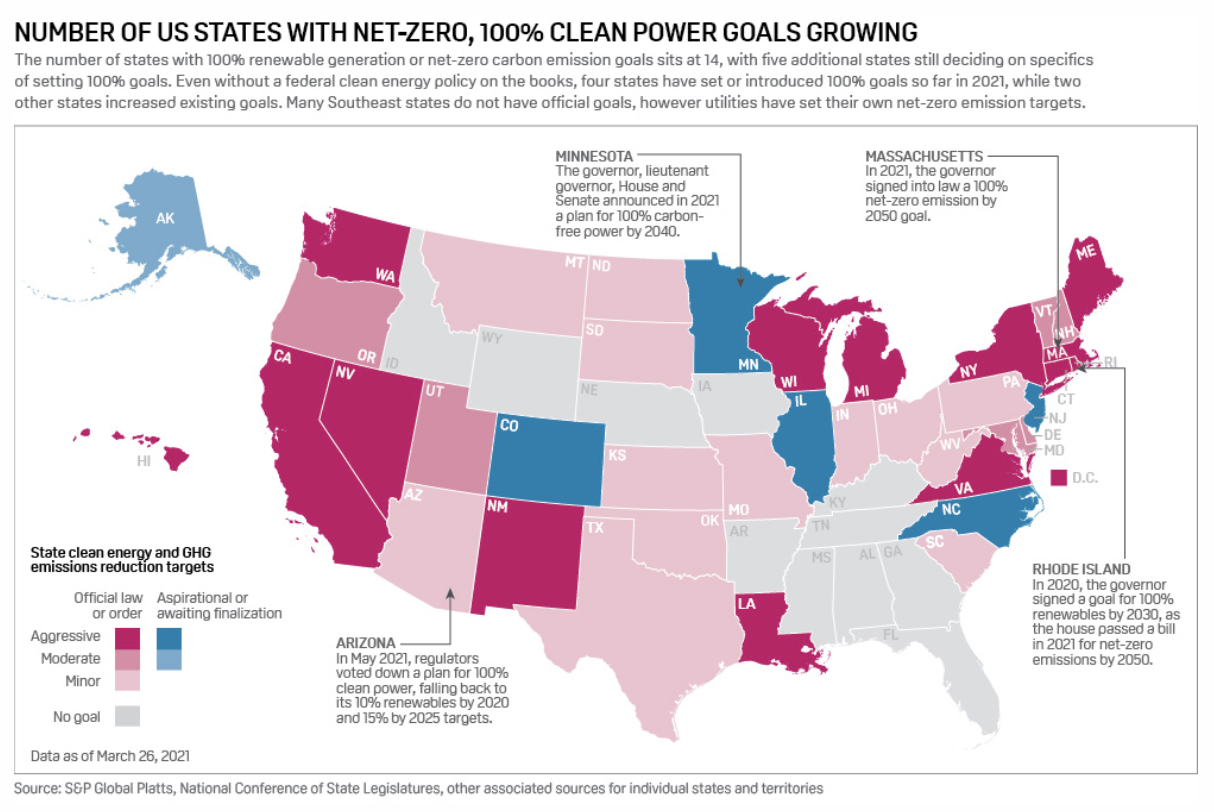 The U.S. Interior Department, as promised, has moved forward with steps to restart oil and natural gas leasing on public lands and offshore waters, but environmental groups and progressive lawmakers have made moves that could now scuttle those plans. The first lease sale of the Biden administration, for the Gulf of Mexico, could come as soon as October, with onshore lease sales following in Q1 2022.

Public and private sector partnerships will be needed to realize the potential that hydrogen could play in a clean energy future, amid challenges to scaling up the resource, a top hydrogen technology advocate said Sept. 1. The comments came as a panel on an S&P Global Platts Energy Transition webinar discussed the outlook for bringing down costs and scaling up use of new forms of the resource, including green hydrogen, derived from renewable energy used in electrolysis, as well as blue hydrogen, stemming from natural gas followed by carbon capture and storage.

Energy transition and decarbonization plans dominated talks between Russian and Asian investors at the Eastern Economic Forum in Vladivostok. Companies signed several deals on developing cleaner energy and renewables, as well as reducing the carbon footprint of industrial production and shipping.

ESG Issuance Ramps Up In Europe Amid Signs Of Market Evolution

The first high-yield bond and leveraged loan to launch after the traditional late-summer break in Europe have both included sustainability language, in a signal that issuance linked to the principles of environmental, social and governance criteria looks to set to make up an increasingly important part of the market in the latter part of this year.

It's been quite the week in energy markets, as Hurricane Ida hit the Louisiana coast, causing damage, power outages and destruction to the regular supply of oil and other projects in and around the region. The US Gulf Coast is built to deal with hurricanes like this, but each storm is unique, and what is impacted and for how long factors into how the oil industry reacts. S&P Global Platts editors discuss storm damage, power outages and disruptions and how oil prices have reacted in the days following the storm.

Several key Asian crude importers have demonstrated a strong preference for sweet crudes offered by non-Middle Eastern suppliers to date in 2021 as import costs for Saudi barrels generally prove higher — a trend that could continue through to year end unless OPEC+ boosts the scale and pace of its production hike.

India's policy move to achieve a more than three-fold growth in ethanol blending rate in gasoline in less than five years is surely a step in the right direction, but to many market experts and industry leaders it sounds like an over-ambitious journey.

India's aviation turbine fuel demand is expected to remain subdued in the near-term as fears of a third wave of COVID-19 infections lurks in the country ahead of the upcoming festival season, with sources anticipating jet fuel prices to be weighed by fresh movement restrictions if cases soar. While domestic travel has picked up in recent months, a potential spike in cases, could derail this recovery.