Investment bankers are bullish on the prospects of continued M&A activity even though regulators are creating some obstacles.

The second quarter marked the third straight period in which total announced M&A value surpassed $1 trillion, according to S&P Global Market's Intelligence's latest M&A and equity offerings market report. This is the first time the announced deal value exceeded that threshold in three consecutive periods, according to S&P Global Market Intelligence data that dates back to the 1990s.

Technology-driven disruption has been an often-cited driver for M&A, and a global push to lower carbon emissions is an emerging catalyst, Lazard Ltd. Chairman and CEO Kenneth Jacobs said during a conference call. "The forces driving global strategic activity remain in place," Jacobs said.

Along with corporates pursuing strategic deals, an abundance amount of private capital is available, Jacobs said. Private equity and venture capital firms have been active on the M&A front in the first half of 2021, and Goldman Sachs Group Inc. Chairman and CEO David Solomon recently noted that the financial sponsor business is seeing increased levels of dry powder thanks to a secular shift in which capital allocators are increasing their weighting to alternative investments.

Special purpose acquisition companies also have an abundance of capital to pursue acquisitions, but the U.S. M&A activity involving blank-check companies slowed considerably in the second quarter, dropping 43.7% sequentially to $85.24 billion. Still, the totals are dramatically above historical norms. 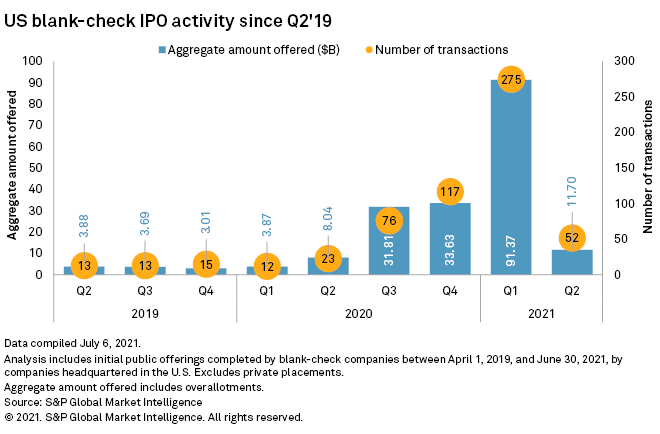 Similarly, SPAC IPOs remain above levels seen before the boom that started in 2020, but the value of the U.S. deals plummeted to $11.70 billion in the second quarter from $91.37 billion in the previous quarter, while the number of deals fell to 52 from 275. The activity has slowed after guidance from the SEC prompted the vehicles to determine whether warrants they offered to investors were accounted for appropriately on their balance sheets as debt or equity. Some SPACs also faced questions about lofty performance projections they were making of the private companies they aimed to buy and take public.

More robust scrutiny of large M&A will likely come from President Joe Biden's executive order that called on agencies to update merger guidelines in an effort to promote competition. Observers view technology and healthcare as the sectors that are the most likely targets of the order.

However, it will take time before updated guidelines are codified and the order has not put a stop to all large deals. In August, Square Inc. announced a roughly $30 billion deal for Afterpay Ltd.

In the near term, the executive order could even speed up announcements of M&A as companies look to get ahead of more stringent rules. Deal advisers believe structural factors will also continue to accelerate M&A activity. One often-cited driver to deals includes digital adoption and disruption pushing many companies to consider strategic options.

Another is the abundance of dry powder available for acquisitions. Investors are increasingly allocating capital to private equity firms as well. And many SPACs still remain on the prowl for targets.

Even if the equity markets experience sustained dislocation, private equity funds and blank-check companies would certainly look to make purchases at lower valuations and have plenty of cash to work should the opportunity arise. 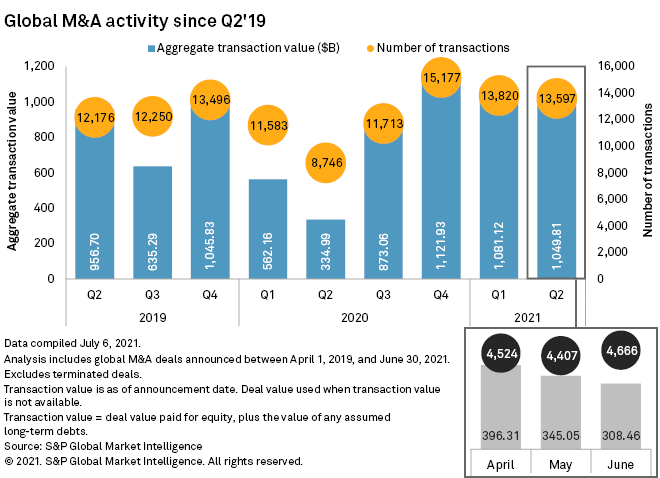