In a striking sign of the global economy’s bullish recovery prospects, oil demand is expected to exceed pre-pandemic levels as early as next year. But that doesn’t mean there aren’t permanent economic scars from the pandemic.

“Sadly [2022] will be the third year of this pandemic, and indeed it is going to continue to provide headwinds. I guess the positive side of this is, indeed, we will start to see [oil] demand exceeding 2019 levels by somewhere around 600,000 to 700,000 barrels a day. So, we will have recovered from all of the downside that we saw in 2020 and the recovery that we've been seeing this year,” Chris Midgley, global director of analytics at S&P Global Platts, told S&P Global Platts’ Capitol Crude podcast this week. “But the reality is, is that I think there is a longer impact of the pandemic than just the lockdowns that we've been experiencing. We still have many people who are out of employment. We have many people who have lost two years, potentially, of education, the ability to better themselves in developing countries and have greater prosperity for the future. And for me, this is the sort of lost generation that could really mean that the impacts of the pandemic are far more reaching than just a couple of years but could extend through a generation.”

The Organization of the Petroleum Exporting Countries coalition now forecasts global oil demand to grow 4.15 million barrels per day in 2022. This marks an increase from its forecast last month of 3.28 million barrels per day of growth for next year, due to the steady global economic outlook and recovery across fuels. Other major oil market players see Asia driving global oil demand to pre-pandemic levels as early as the fourth quarter of this year.

In the immediate term, oil prices have been volatile regionally due to investors’ concerns over the spread of the delta variant and how the oil industry will respond to the energy transition to renewable energy.

If the global economy can limit warming to 1.5 or 2 degrees Celsius per the pathway laid out by the U.N.’s Intergovernmental Panel on Climate Change—which indicated last month that doing so may soon be "beyond reach" without "immediate, rapid and large-scale reductions" in emissions—global oil demand would peak by 2025 and decline 40% in the next 30 years, according to S&P Global Platts Analytics.

“There is always the competing challenge between economic growth and dealing and tackling with this climate emergency. The reality is it's going to be a tight rope that’s going to have to be walked here between those two,” Mr. Midgley said on the Capitol Crude podcast. “One of the biggest problems that I think is facing climate change today is that we want to address it, we want to have an energy transition, but we don't want to let go of the economic model of perpetual growth, GDP always growing. We’re focusing always on those GDP numbers.”

“We shouldn't forget that climate has even less borders than the virus,” he added. “With the virus, we can stop air travel. We certainly can't change the impact of climate change and the terrible events that we've seen, whether it's the recent hurricanes, the flooding, the forest fires—the impact on countries which may have the lowest emissions but will be impacted if other countries don't take action.”

Today is Thursday, September 16, 2021, and here is today’s essential intelligence.

Economic Research: Canada And Its Provinces: GDP Growth Prospects In The Coming Decade 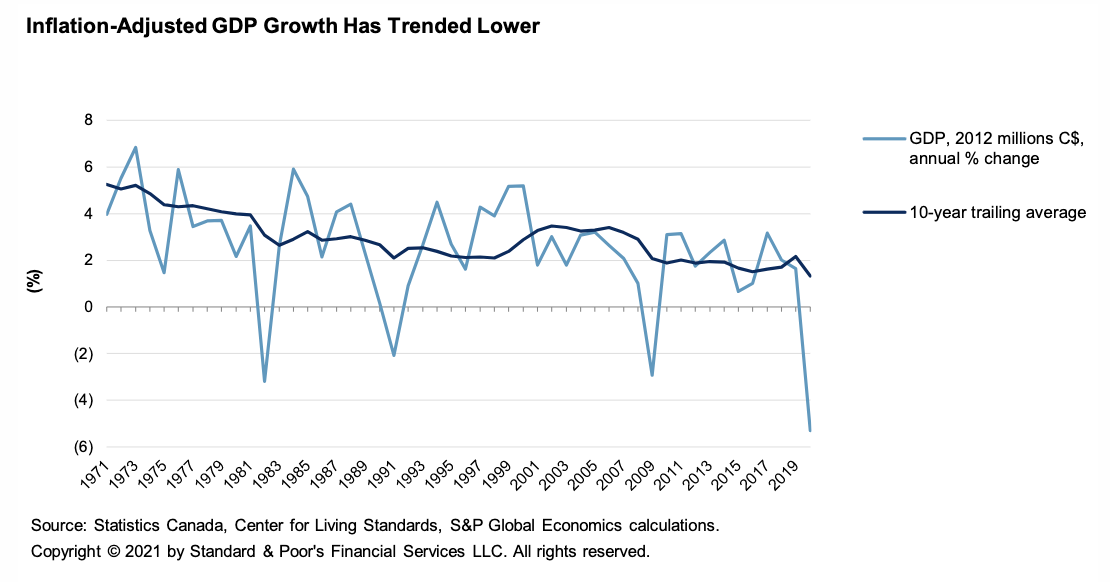 In running 1 million simulations by drawing on historical experience, S&P Global Ratings estimated that median annual real GDP growth rate for Canada over the next 10 years is 2.2%. Real GDP growth at the national median does not fully explain what's driving growth at the regional level. Government policies that influence the labor market matter, and can influence provincial fiscal outcomes.

Policymakers meeting at the United Nations Climate Change Conference, or COP26, in Glasgow in November will face a subject set to change the future course of the voluntary carbon markets: the corresponding adjustment. A decision on this outstanding issue could be so strong it would cement a new core principle for carbon finance and may possibly trigger a split in the market.

Japanese banks’ holdings of domestic government bonds could increase for the second straight year following the recent hawkish turn of the U.S. Federal Reserve and continued growth of yen deposits. Some lenders in the world’s third-largest economy started stocking up on 20-year Japanese government bonds, or JGBs, as the yield rose past 0.41% in late August, analysts said. 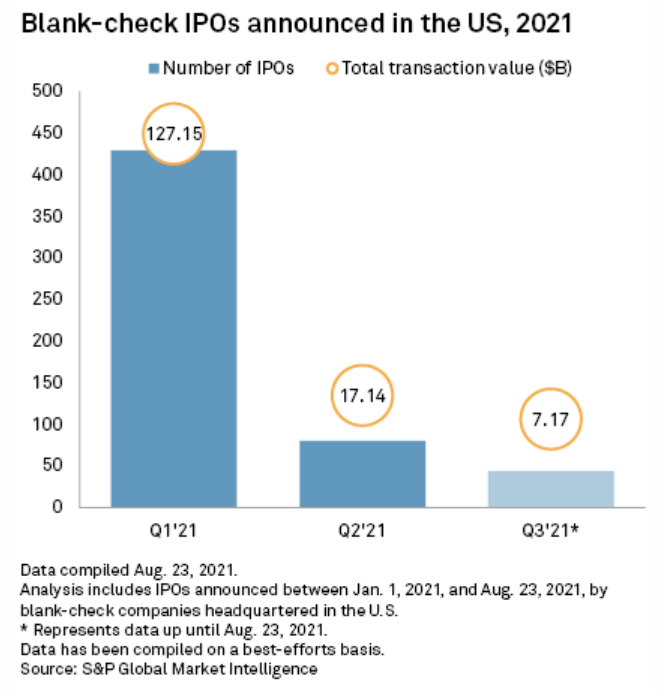 London is making an effort to pry away listings of special purpose acquisition companies from other financial hubs by easing rules that had hamstrung competition. The U.K. capital missed out on opportunities earlier this year to list SPACs, which raise capital via an IPO and subsequently purchase a previously unidentified business, because of its tighter regulations, legal experts said.

A steady flow of clean-tech startups are still going public through special purpose acquisition companies as investors looking to cash in on accelerating climate policies buck a broader slowdown in the rush for blank-check mergers. 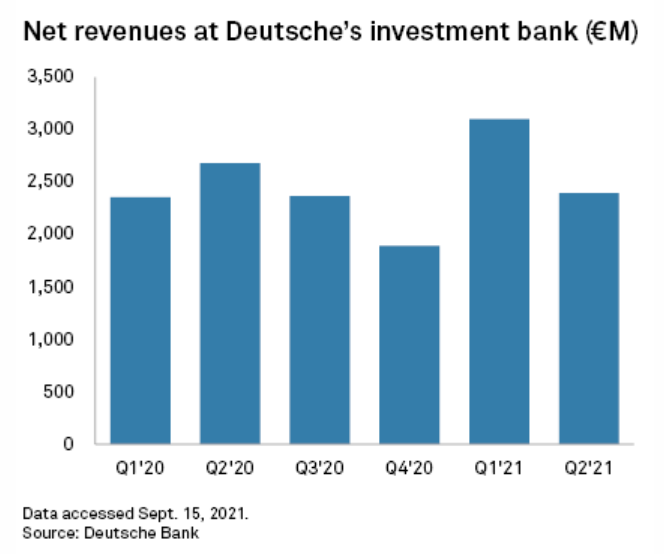 Deutsche Bank AG's investment banking business picked up in August and early September after a sluggish start to the third quarter, and a continued focus on costs should ensure more sustainable revenues in the future, according to the division's head. 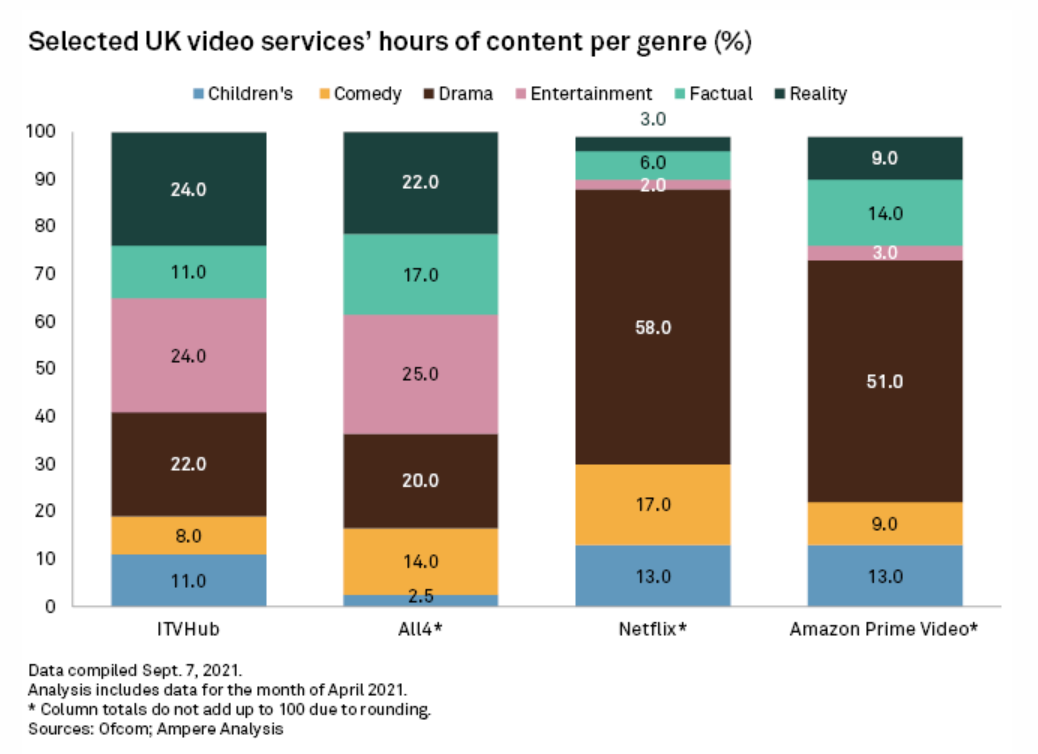 Netflix Inc. is counting on siblings seeking love and a computer-enhanced dance contest to help fend off new competition in the U.K. The streamer has commissioned "Dated and Related", "Dance Monsters" and a third realty show called "Snowflake Mountain" as it steps up its tiny unscripted offering ahead of the introduction of rival on-demand services from ViacomCBS Inc. and Comcast Corp.

The Indian Premier League, or IPL, and World Cup cricket tournaments are slated to kick off in September and October, and with both tournaments to be broadcast on Disney+ Hotstar, the streaming service is primed for a surge in mobile app downloads and users. Hotstar monthly active users, or MAUs, saw 96% growth in October 2020 after the start of the previous IPL competition and was more than double pre-tournament levels through December.

The Board Matrix: The (ESG) Value Of Well-Connected Directors 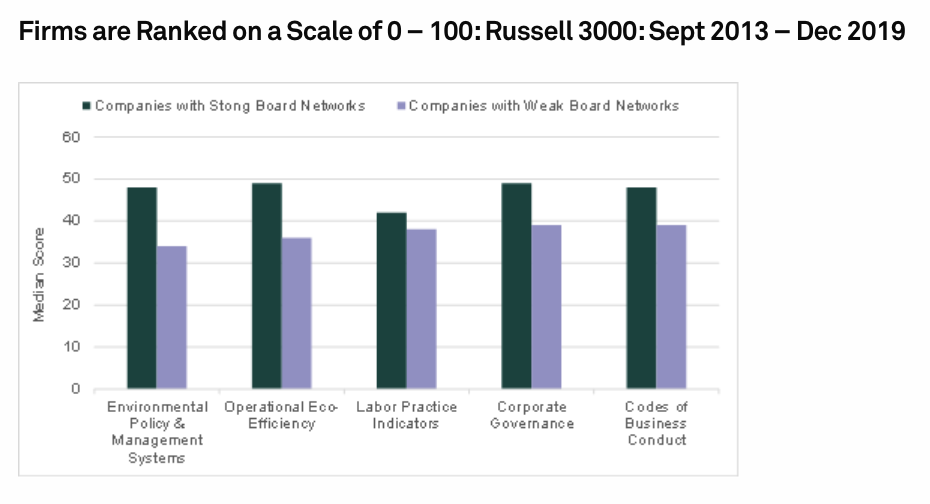 Corporate boards are responsible for shaping and overseeing environmental, social and governance (ESG) policies for their organizations. S&P Market Intelligence examines the relationship between companies connected through shared board members and ESG performance.

Companies issuing green bonds continue to gain funding cost advantages compared to their vanilla debt, according to new research, and industry players do not foresee this so-called greenium going away anytime soon.

Policymakers meeting at the United Nations Climate Change Conference, or COP26, in Glasgow in November will face a subject set to change the future course of the voluntary carbon markets: the corresponding adjustment. A decision on this outstanding issue could be so strong it would cement a new core principle for carbon finance and may possibly trigger a split in the market.

Fujairah Data: Oil Stocks Tumble To Three-Year Low With All Categories Down 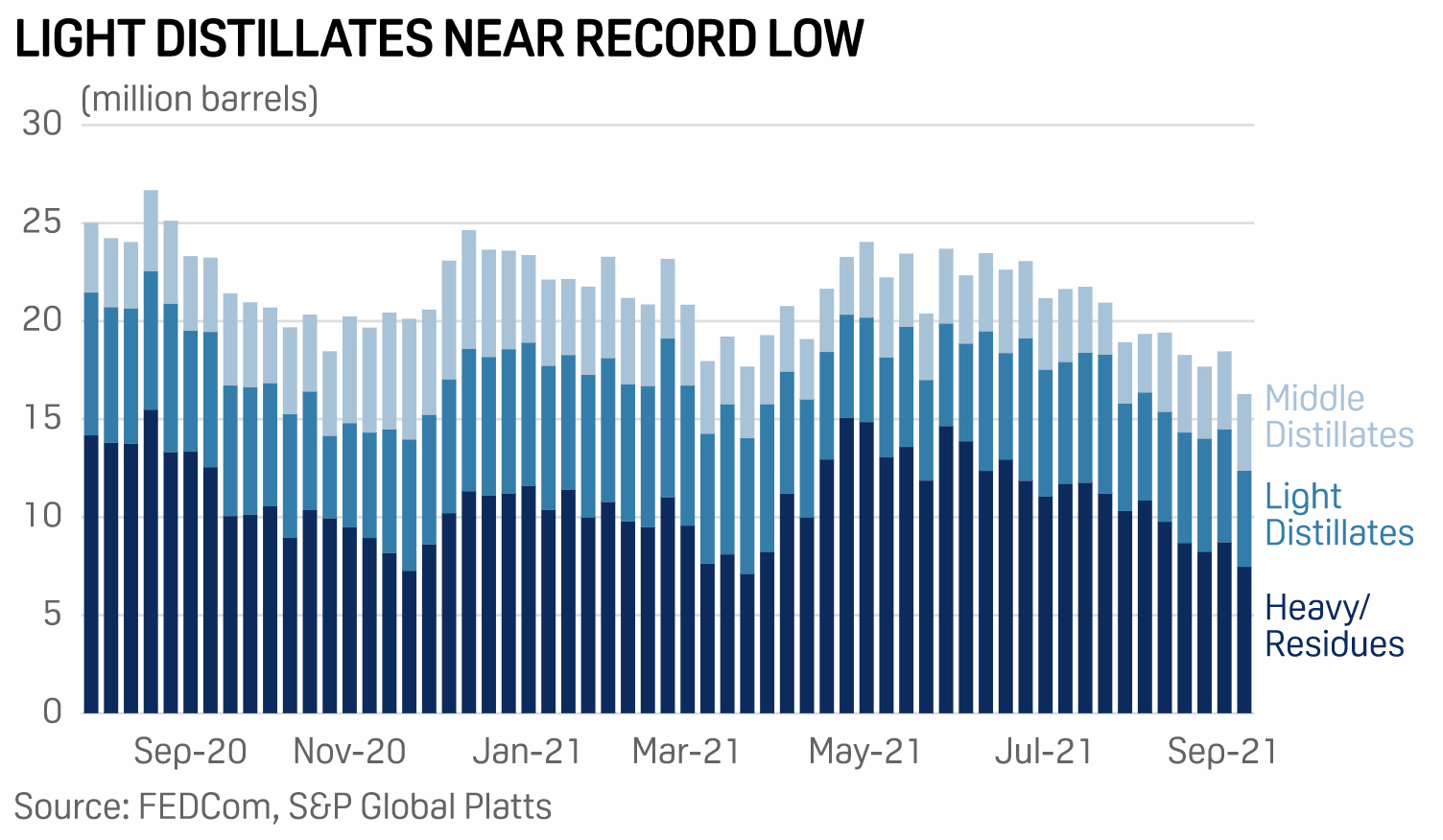 Oil product stockpiles at the UAE's Port of Fujairah have declined to a three-year low, with all categories showing dwindling supplies. The total inventory was 16.284 million barrels as of Sept. 13, down 11.8% from a week earlier and the lowest since Aug. 27, 2018, according to data from the Fujairah Oil Industry Zone provided exclusively to S&P Global Platts on Sept. 15.

LNG Project Tracker: Momentum Builds 'At Least For A Couple' Of Export Projects

The biggest U.S. LNG exporter, Cheniere Energy Inc., has talked about commercially sanctioning an LNG growth project in 2022, and other LNG infrastructure developers have signed supply deals that could push projects forward after a dearth of final investment decisions in the last few years.

China's push to host a "green" 2022 Olympics and Paralympic Winter Games is expected to boost clean energy demand including natural gas consumption over the coming winter-spring heating season, but this has also raised concerns about costlier natural gas as global prices surge to record levels.