The Indian Premier League, or IPL, and World Cup cricket tournaments are slated to kick off in September and October, and with both tournaments to be broadcast on Disney+ Hotstar, the streaming service is primed for a surge in mobile app downloads and users. Hotstar monthly active users, or MAUs, saw 96% growth in October 2020 after the start of the previous IPL competition and was more than double pre-tournament levels through December.

Indian cricket fans are in for more than two months of nonstop, top-tier matches between Sept. 19 and Nov. 14. IPL 2021 was scheduled for April 9 to May 30 but paused on May 2 after COVID-19 cases increased among players and support staff. The remaining 31 matches, including qualifiers and the final, are scheduled to kick off in the United Arab Emirates on Sept. 19 and end on Oct. 15. The ICC Men's T20 World Cup 2021 is scheduled for Oct. 17 to Nov. 14.

The Walt Disney Co.-owned Star India Private Ltd. holds the broadcasting rights to both tournaments on traditional and digital platforms and is poised to see a significant uptick in sign-ups for its over-the-top service, Disney+ Hotstar.

While the general entertainment genre, which dominates the Indian media landscape, is offered by local broadcasters across 12 Indian languages and mirrored on their OTT platforms, sports are mainly available via dedicated sports channels. Recent entrant Viacom 18 Media Private Ltd. acquired La Liga Spanish and Italian Serie A soccer rights and featured the content via its general entertainment and music channels, but cricket is the country's main audience driver. According to Indian audience measurement agency Broadcast Audience Research Council, 44% of TV households tuned in to IPL 2020 live matches. Cricket is primarily on Star India and Sony Pictures Networks India Pvt. Ltd., which own top tournament rights across all their platforms and thus make matches available on the Disney+ Hotstar and SonyLIV OTT services.

Surge in Hotstar, SonyLIV downloads and users during cricket tournaments

Apptopia Inc. data shows a clear correlation between cricket tournament schedules and Disney+ Hotstar mobile app downloads and usage. IPL is traditionally scheduled for late March to mid-May, but the 2020 tournament was delayed to Sept. 19, 2020, through Nov. 10, 2020, due to COVID-19. Monthly downloads of the Hotstar app jumped in September 2020, up 237% over August levels, and the app's MAU nearly doubled month over month in October 2020.

The kickoff of IPL 2021 — just five months after the close of the prior tournament — gave the app's stats another boost. Monthly downloads were up 112% month over month in April and MAU increased by 7%.

Downloads and MAU of SonyLIV were also boosted by cricket. In December 2020, monthly downloads of the app were up 82% and MAUs were up 43%, coinciding with the SonyLIV broadcast of India's Tour of Australia, held from November 27, 2020, to January 19, 2021. Outside of cricket, SonyLIV downloads grew 109% in July 2021, attributable to premier sports events UEFA Euro 2020 and Tokyo Olympics 2020. 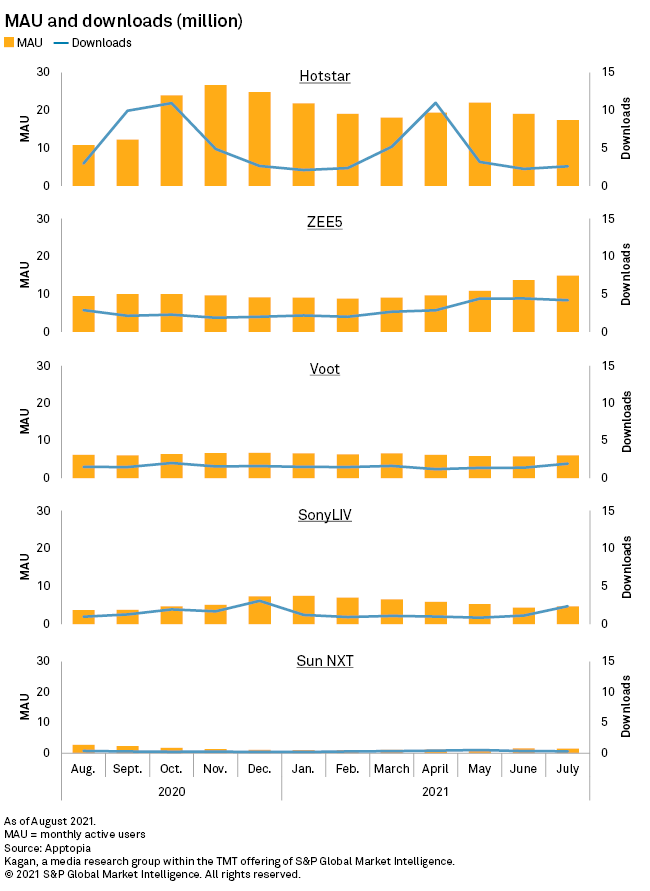